Wednesday morning this and that . . . 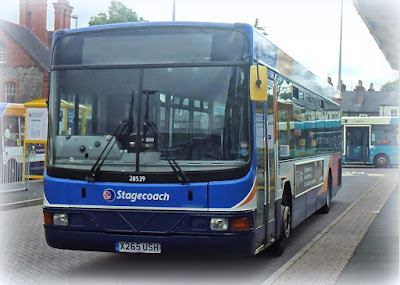 I decided to go into town with Todd yesterday to pay the rent.  It was a pretty nice day weather-wise and I wanted to take advantage of it.    We got on the bus and I paid my fair, ladies first and all that, and then Todd couldn't find his bus pass.  I didn't have an extra £2.20 on me to pay his fare so he said for me to go on in and he would look for his bus pass and meet me by the town hall, and so I continued the journey on my own.   (A small side observation here, why does one bus cost £2 return fare into Chester city centre and another one £2.20.  It doesn't make sense, but hey ho!)  So he got off and I sat down.

Several of my children suffer from anxiety.  They actually take medication for it.  I know I have other family members who also suffer from it.   I didn't think I did as well, but then I noticed yesterday on the bus that I may have well discovered the root of some of the health issues which have plagued me over the past few years.  I sat there on the bus and started thinking about things like  . . . . what if my knees lock in town and I can't get back to the bus, what if Todd can't find his bus pass (he couldn't find his bank card either so we had to report it missing (whole  'nother story) and so he couldn't get any cash either to pay the fare as he had no means), what if I got sick and he wasn't there and I fainted or something on the cobbles, broke my glasses, etc. etc.   As I started having these thoughts, I started to feel that tightening in my chest and all of the feelings I have associated with heart incidents, and then I stopped and I realised . . . .  "THIS IS ANXIETY!"  I was on my way towards a full blown anxiety attack, unless I stopped it right then and there.    So I said a little prayer and started to think about nice things, anything other than all the things that could go wrong and me being all alone to cope with them, and I calmed myself down.

I got off the bus in town and found a bench and parked myself on it and waited for Todd to arrive, which thankfully didn't take that long. His bus pass had been in his pocket all along.  DUH! 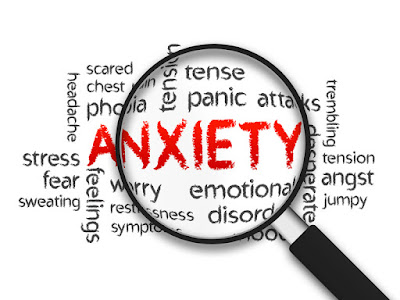 But in a way it was a good thing because I think I have recognised the cause of some of my problems and anxiety is at the root of it and if I think back, I have probably always been anxious about certain things and I am probably also a little bit OCD, but I have learnt to control it.   I think I will make an appointment with the Doctor to talk about it, or maybe I will just try to learn how to control it.  I don't think I want another pill to take.

It was so busy in Chester yesterday.  Lots of people out and about.  I suppose this is the last week before School starts up again and there were a lot of people shopping for school supplies and the like.  We paid the rent and I wanted to pick up some fruit and veg at M&S. 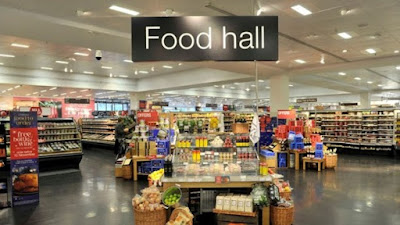 I don't know why it is, but M&S has the nicest fruit and veg.   It seems to last a whole  lot longer when you get it home than the fruit and veg from other shops.  Its kind of weird really when you think about it, but its true.  It is the best.  They had some lovely white fleshed nectarines and plums, so I got some of those and a new vegetable I had never seen before called "Biancoli." 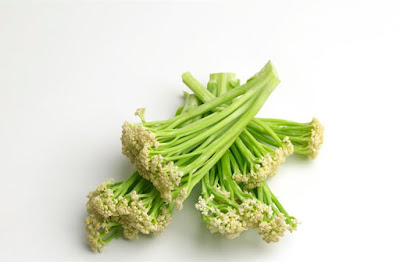 Biancoli is sweet sprouting cauliflower!  Like it's cousins tender-stem broccoli or purple sprouting broccoli, it is the gentler version of cauliflower.  I can't wait to use it!  First developed by  the Japanese,  sweet sprouting cauliflower has been likened to an edible bride’s bouquet, with long, thin-stemmed and tiny white-cream florets. Practical as well as a pretty face, the brassica is said to be sweeter, more versatile and easier to prepare and cook than its everyday counterpart, as well as not having the sometimes-wasteful thick stem. 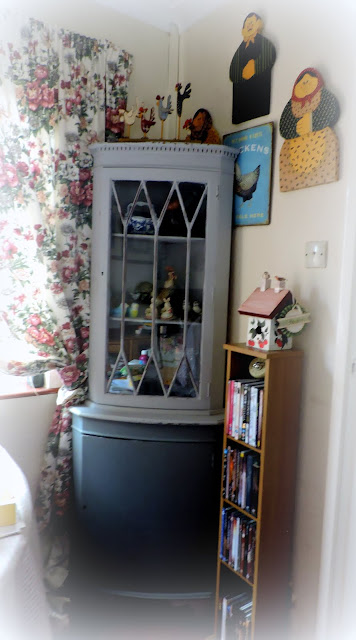 Look at what my next door neighbor gave us!  (Yes, this is the same one who had her car windows all smashed in at the weekend.)  We had to do a bit of rearranging, but I am so pleased with the results.   It looks lovely.  Its what they call "Shabby Chic."  We did originally have a bookcase there which we have moved into the front hall.  What a mess we found behind it however.  Cobwebs and BLACK MOLDE.  Ugh . . . that is the wall that backs onto the kitchen and on the other side of the wall is our washing machine and dishwasher.   The wall paper is coming off where the mold is and so we will have to strip that whole wall and paint.  We do want to paint the lounge and dining room anyways, so this just gives us impetus to get it done all the sooner.  I also have to rearrange the wall art.   Those Russian People Bread Boards are ones that I painted a very long time ago, before I even came over to the UK.  I have always loved them.    I did them from a photo I saw in a magazine. 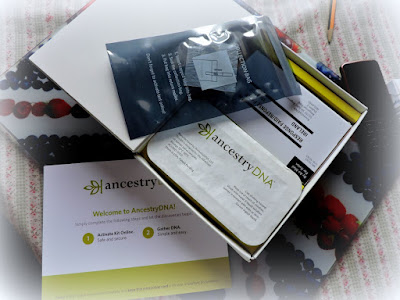 Look at what came in the post yesterday!  I am so excited.  It is my DNA test and it came from Ireland.  I will collect it today and pop it back into the post and hopefully it won't be too long before I find out what my DNA roots are.   This is the best Birthday Present I could have ever gotten. (Thanks Val!)  I have wanted to do this for a very long time.   I am wondering where my DNA comes from . . .  what will they discover.  I am pretty sure there is Native North American DNA, and French/France, perhaps British, possibly German.  Its all very exciting.  I can't wait to see what the results are! 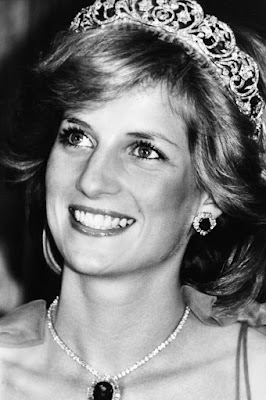 Its hard to believe, but today marks the 19th anniversary of the day we lost Princess Diana.   I can still remember exactly what I was doing when the news came over the telly that she had been in an accident.  I was living in Georgetown, Ontario and I was playing Yoshi's Island with the boys on the video player in the boy's bedroom when my husband called out from our room to say that she had been in an accident.  I remember sitting in the room and watching CNN until we went to bed that night and then dashing out and turning the news on first thing in the morning to discover the news that she had passed away.  Oh what sad news that was.  This was one of life's defining moments, much like when President Kennedy was assassinated or when man walked on the moon.   One of those moments where you remember exactly what you were doing, feeling, etc. when the incident happened. 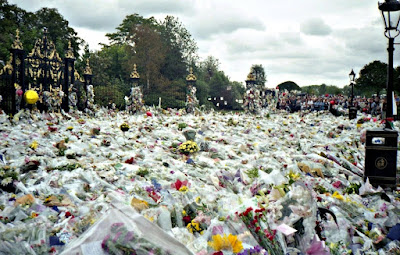 I remember being utterly amazed by the amount of flowers which were left in remembrance of her by Kensington Palace, etc. and the flowers which were thrown at the hearse as it made its way to her final resting place.  I had never seen anything like it before  . . .  and of course the sadness of watching those young sons of hers walking so bravely behind her coffin.

Eternally young and loved by many, I pause today to remember a woman who gave much to the world in her short life.

⊰✿⊰⊰✿⊰⊰✿⊰⊰✿⊰⊰✿⊰⊰✿⊰⊰✿⊰
"I believe that we can accomplish any object
that we make up our minds to,
and no boy or girl ought to sit down and say,
because they cannot do as well as somebody else,
that they will not do anything."
~Heber J Grant
⊰✿⊰⊰✿⊰⊰✿⊰⊰✿⊰⊰✿⊰⊰✿⊰⊰✿⊰ 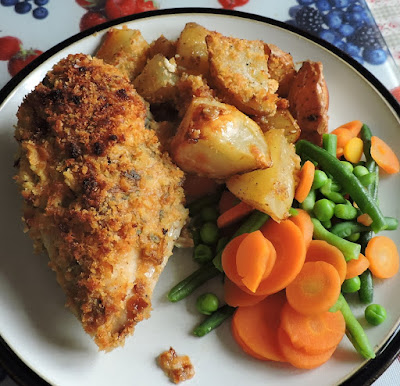 Cooking in The English Kitchen today  . . .  Baked Chicken with Tarragon and Dijon Mustard.  Quite simply delicious!

I hope that you have a lovely Wednesday.  It looks as if it is going to be another fine day here today!  Whatever you get up to don't forget  . . .