These are a few of my favourite things . . . 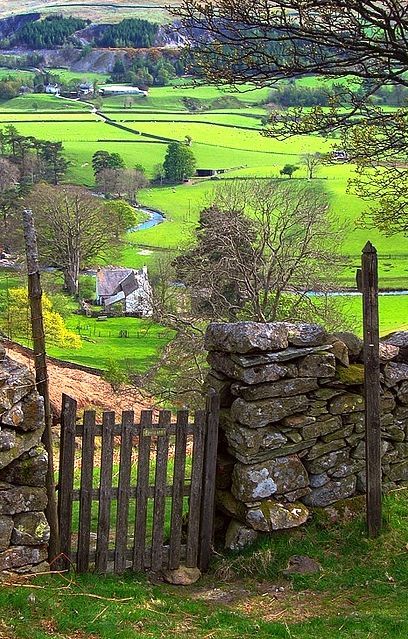 Long walks with my best friend (Todd) and Mitzie in the British countryside.  We live in such a beautiful country and it is literally covered from top to bottom with beautiful countryside walks via public footpaths, etc.  They are also signed.  You can follow them from the North to the South and the East to the West and back again if you wish.  We are a nation of Ramblers.  We don't do as much of it since we moved back to the North West from the South East, but I still love it when we do. 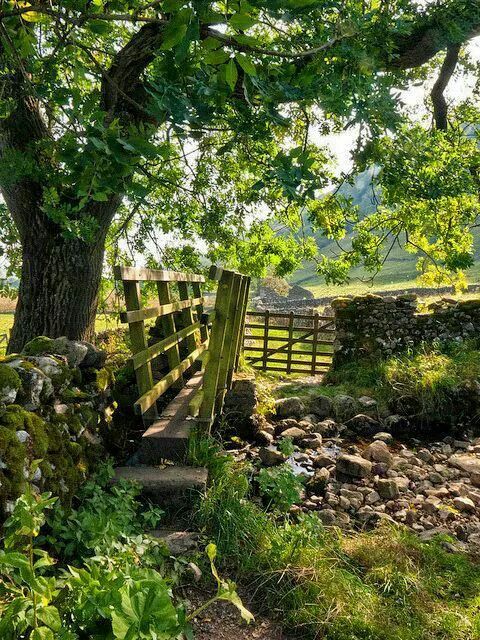 One of the nicer ones is the Dales Way, which is an 84-mile Long Distance Footpath in Northern England, from Ilkley, West Yorkshire, to Bowness-on-Windermere, Cumbria. It passes through two National Parks: the Yorkshire Dales National Park and the Lake District National Park.  Obviously this would take more than a day to hike it, but there are places to eat and to stay at overnight along the way. 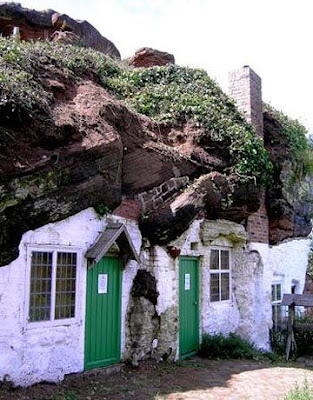 Kinver Edge and the Rock Houses is just one of the places owned and maintained by the National Trust, and actually not too overly far from where we live.  Founded in 1895, the National Trust works to preserve and protect historic places and spaces for everyone.  Their historic properties, woodlands, gardens, etc.are scattered all over the country. It owns over 350 heritage properties which includes many historic houses and gardens, industrial monuments, and social history sites. Most of these are open to the public, usually for a charge. Others are leased, on terms that manage to preserve their character. The Trust is one of the largest landowners in the United Kingdom, owning over 247,000 hectares (950 sq mi) of land, including many characteristic sites of natural beauty, most of which are open to the public free of charge. The Trust, one of the largest UK charities financially, is funded by membership subscriptions, entrance fees, legacies, and revenue from gift shops and restaurants within its properties. As an example,  when Beatrix Potter died, she left all of her holdings to the National Trust, and they have preserved and kept them in good nick to this very day.  I love visiting properties, gardens and spaces protected and held by the National Trust.  They are always fascinating and are a wonderful glimpse into our past. 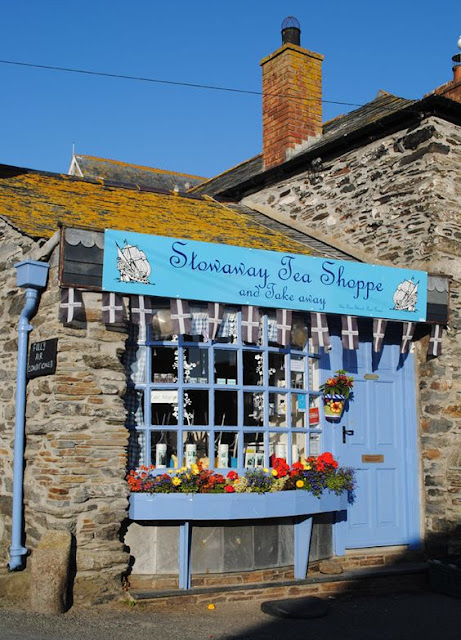 British Tea Rooms.   A tearoom or tea shop is a small restaurant where beverages and light meals are served, having a sedate or subdued atmosphere. A customer may eat a cream tea (also known as Devonshire tea), consisting of a scone with jam and clotted cream, or a full afternoon tea of sandwiches, scones, and cake. Alternatively a high tea may be served, of hot savoury food as the final meal of the day. In Scotland teas are usually served with a variety of scones, pancakes, crumpets and other cakes.  I love LOVE British Tea Rooms.  Most are cosy and quaint and splendid places to take refreshment.  You will find one or two in literally every village, town or city in the UK.

Which brings me to another one of my favourite things  . . . 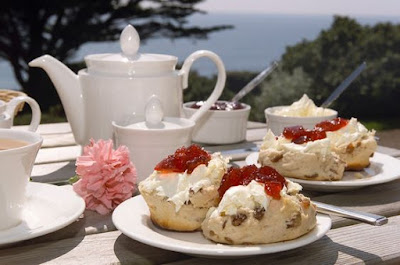 The Cream Tea. A cream tea (also known as a Devonshire tea, Devon cream tea or Cornish cream tea) is a form of afternoon tea light meal, consisting of tea taken with a combination of scones, clotted cream, and jam.

There are regional variations as to how a cream tea should preferably be eaten. The Devonshire (or Devon) method is to split the scone in two, cover each half with clotted cream, and then add strawberry jam on top. Traditionally it is important that the scones be warm (ideally, freshly baked), and that clotted (rather than whipped) cream and strawberry jam, rather than any other variety, are used.

In Cornwall, the cream tea was traditionally served with a "Cornish split", a type of slightly sweet white bread roll, rather than a scone. It is now rare to find this available commercially, even in Cornwall.  The warm roll (or scone) is first buttered, then spread with strawberry jam, and finally topped with a spoonful of clotted cream.

Jam first or cream first . . .  it doesn't really matter to me.  I love a cream tea no matter which of the two things go on first.  And you can get herbal blends if black tea is not on your list of things you love/want to drink. 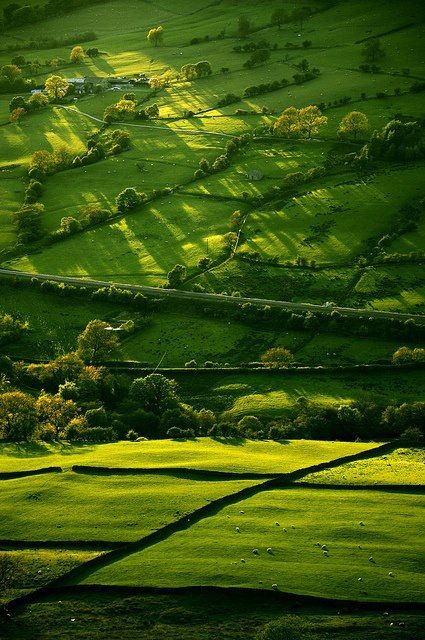 Hedgerows and Stonewalls.  Our rural countryside here in the UK is marked with a beautiful patchwork of hedgerows and stonewalls, depending on which part of the country you are in.  Hedges are used as field boundaries in the lowland regions of England. In the highlands, such as the Yorkshire Dales, dry stone walls are commonly used. Down south you will see more hedgerows and up north more stone walls.  Its all according to what was traditionally more available for use when it came to the job of separating grazing fields, meadows, personal property, etc.

Hedgerows have often been overlooked as one of Britain's most valuable habitats. Their importance as wildlife havens and highways, barriers and wind-breaks is now being fully recognised however. Hedgerows were originally planted to divide the land into fields and pens, marking the boundaries of farms and parishes. They suffered a dramatic decline as field sizes increased. Trees, brambles and woody shrubs such as hawthorn, blackthorn and field maple make up a mature hedgerow. These are much needed refuges for songbirds, while voles, mice and shrews are typical hedgerow mammals that take advantage of all the autumnal fruit.

They are charming and so beautiful.  From the air the UK looks like a beautiful patchwork quilt of greens. 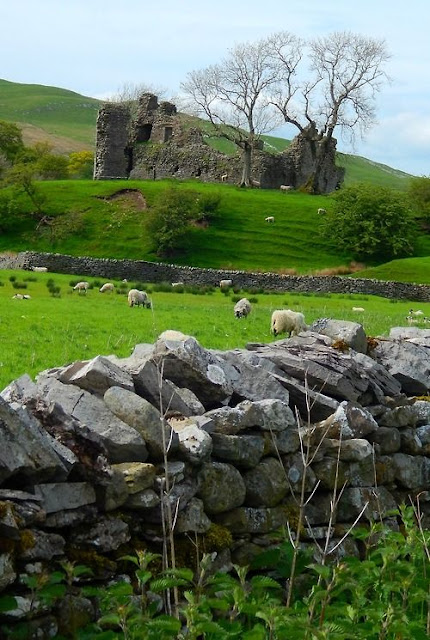 Castles.   There are probably more castles per capita here in the UK than there are anywhere else in the World.  I love them all.  Some are fairly intact and others are ruins.  I have visited quite a few since I arrived here sixteen years ago.  One of my favourites it Pendragon Castle (see above photo).   Largely a ruin it is located in the Mallerstang Dale in Cumbria, standing in an atmospheric spot above a bend in the river Eden, overlooked by Wild Boar Fell to the south-west and Mallerstang Edge to the east. According to legend, the castle was built by Uther Pendragon, father of King Arthur, who is said to have unsuccessfully tried to divert the river to provide its moat.   Todd and I have come to know it quite well. Each time we have visited and stayed in the area we have rented a small cottage on a hill overlooking the castle and have spent many hours exploring all of its nooks and crannies and dreaming about the people who once lived there.  Legends or not.

Another favourite of mine is Scotney Castle, and or course Hever Castle.  Scotney is very picturesque and Hever is of course the childhood home of Anne Boleyn.

I guess when it comes right down to it I just love the British Isles and its people, culture, landscapes, architecture, history, etc.  I've not been to see everywhere and still have a great deal to explore, but what I have seen I have fallen in love with.  Even the cities.  This feels like home to me.

And that is my very British version of some of my favourite things for this week! 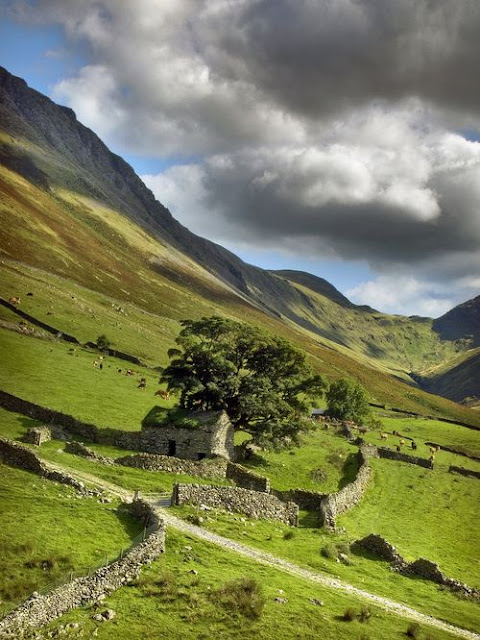 Todd's appointment at the hospital went very well yesterday, although when we got there, there was a bit of confusion as to whether he should have been there or not.  In any case it was finally sorted and we did see the Nurse Practioner who works under his consultant from Clatterbridge who was not there.  We waited a good hour before we were taken into see her, which really annoyed Todd.  He is not very good at waiting in hospitals/medical offices, and gets quite impatient.  I told him he better get used to it because this is our life for the next six months or so.  We now have a much clearer idea of what is going to happen and when and how.  I think we both left feeling very encouraged. 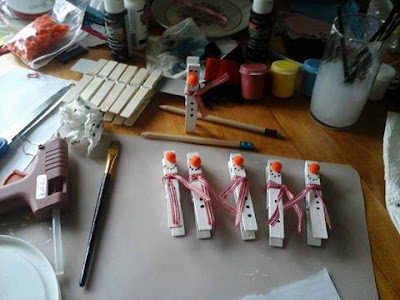 My daughter sent me a photograph of some of the ornaments she made with my sister yesterday.  They are quite cute.  Clothespin snowmen.  I am so very grateful to my sister for her helping Eileen with this project.  And I know Eileen is too.  According to Eileen they had a wonderful time together.   That makes me really happy.  Thanks sis!!

In The English Kitchen today . . .  Chicken Filets with a Lemon and Caper Sauce.  We love this.  I love this. It is also one of my favourite things.