This is a photo of my father, my mother and myself  way back when.  I look about six months old so it must be in about December of 1955 or perhaps a tiny bit later.  I was their first child and I feel very blessed for being so.  I got to have both of my parents all to myself for three whole years before my sister came along and charged things up!  My dad looks so young in this photo, and I guess he was.   My mother was almost 2 years older than him, so if she was 23 when I was born, then he was only 21.  He's 82 now, so that was a very long time ago!  (Which makes me pretty old now too. ☺)

I love my dad very much.  He was not perfect, but he was the best father he new know to be, which is all anyone can ask from anyone.   Because I was the oldest and got him all to myself for a few years before anyone else came along, I got to share a special relationship with him, that my sister and brother didn't have.

He always spent a lot of time with me.  I know how very blessed and lucky I am to have had those years with him on my own.   He used to read to me all the time.  My dad loves to read.   He can still remember the words to one book in particular that he read to me.  He read it to me so many times they are etched indelibly into his brain . . .  and they are etched in mine as well, for when I close my eyes and think back, I can still hear him reading it to me.  It was a book about Tom and Jerry, and he made up voices for all of the characters.

"Jerry mouse stepped out of his mousehole one day.  'My' he cried to his little friend Tuffy as he looked over towards the big people's kitchen, 'What a beautiful day!  Lets go for a walk, lets go for a picnic!'"

Indelible.  And in a high squeaky voice.  Etched in my mind and in my heart.  He taught me to love reading and to love books and to love words.  I will always, always be grateful for that.  It is a love which has added many hours and years of joy to my life.

My father worked really hard to provide for his family.  He grew up with literally nothing.   His own family had been very, very poor.  It was a large French Catholic family and my Grandfather only ever had seasonal work.   My father was put into a Catholic orphanage when he was very small, 3 years old, because his mother had TB and his father was unable to take care of them.  I think he had two or three older sibings at that point.  As a child he often did without because their family was so poor.  He had to leave school when he was 15 or so because he needed to go out to work to help the family.  He did many different jobs, even working as a lumberjack in a camp.  He was a very smart man, but never able to tap his full potential in that area because of the poverty of his family.  When he was old enough he joined the Canadian Airforce, and I can remember that he sent money home to his mother each month for the rest of her life.

My love of laughter, my love of words, my work ethic, my love of reading, etc.  I have so many things to thank my father for.    I love my dad with all my heart and I am so grateful that he is still here so that I can tell him so.  I'll call him a bit later today to wish him a Happy Father's Day.  I painted him a picture as a gift, which he has gotten by now. 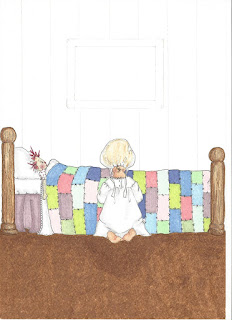 I can't believe that I didn't scan a finished copy.  This was it only half done.  He had wanted a little girl praying.  I still had the wallpaper to finish here and the writing to put in the picture frame.  I hope that he liked it.

I am grateful for all the fathers in my life . . . 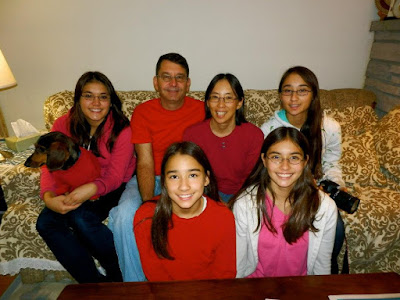 My brother is another fine example to me of what a father and husband should be.   I have always looked up to him.   He has four lovely daughters who are a great testimony to his and his wife Christine's great parenting skills.

My husband who is a great dad to our Mitzie poo.  We were never blessed to be able to have a family together, but I can tell by the tender care he gives to our Mitzie that he would have been a great dad.

My son in law Tom.  He's a great dad to Maryn and Cameron and a great husband to my daughter.   They say that the greatest gift a father can give his children is to love their mother.

Our Doug.  He has three lovely boys and I think he is a great father and husband.

Our Bruce.  He's a great carer to Baxter and to Lucy and he's been a great Uncle to his nephews and nieces.  I am sure that when he and Sara start a family of their own, he will also be a great father to their children.  Less than a month til their wedding now!

Anthony and his family.  He's a great dad to those two boys of theirs also.  Bakes Cinnamon buns with them, and all sorts.

All fine examples to me of good men, good husbands and good fathers.

Happy Father's Day to all the special men in my life!

Must dash as I have a ton of things to get done before we leave for church!