Wednesday meanderings of the mind . . .

I was standing in the front garden yesterday looking at the hydrangea and wondering if it was worth clipping some of the heads to dry to decorate the house this winter when it happened . . .  I heard that age old sound that never fails to stir my heart in a special way . . .  the sound of wild geese flying over head . . .  and I looked up and saw them moving across the leaden skies and I marvelled again at this journey that they take each year.  It is a sight that I have found miraculously amazing since my childhood years . . . a continuous thread throughout my life which has never changed no matter where I have lived.  A quickening of the heart . . .

There isn't a lot left in the garden now except for the task of those last bits of clearing up from the summer . . . dead heading, pulling and covering . . .  we leave the rose hips for the birds.   Dried poppy pods have been duly buried with the hope that more will grow next year.  The small waxen buds of our Camellia bush which will enchant us in the early spring of next year are already forming on the branches . . . so even with the garden which is dying around us, we find the promise of next Spring making it's presence known.

Here and there  an errant blossom still blooms . . .  having not quite yet realised that the autumn is here to stay . . .  and that before too long a frost will take the last vestiges of what was our summer away for another year . . .

I may be alone in this . . . but there is a unique beauty to that first frost of the year which coats everything in a glittering icy mantel . . . each branch and leaf having been touched with magical paint from the brush of the impish Jack who . . .  in my mind's eye at least . . .  has spent the night jumping from dried seed pod to bare branch . . .  to drying leaf and blade of grass . . .

The sun rises of a morning and begins it's arch through the sky . . .  touching each glittering blade and branch and leaf with the waning warmth of it's fingers . . . and just as magically as it had appeared . . .  the glitter disappears.  In it's place . . .  sodden leaf and blackened branch . . . an autumnal soliloquy to the days which pass and follow one another . . .  marching on through time into a Winter which looms . . .

But for now we relish the colour, sounds and smells around us and the joy of autumn days. 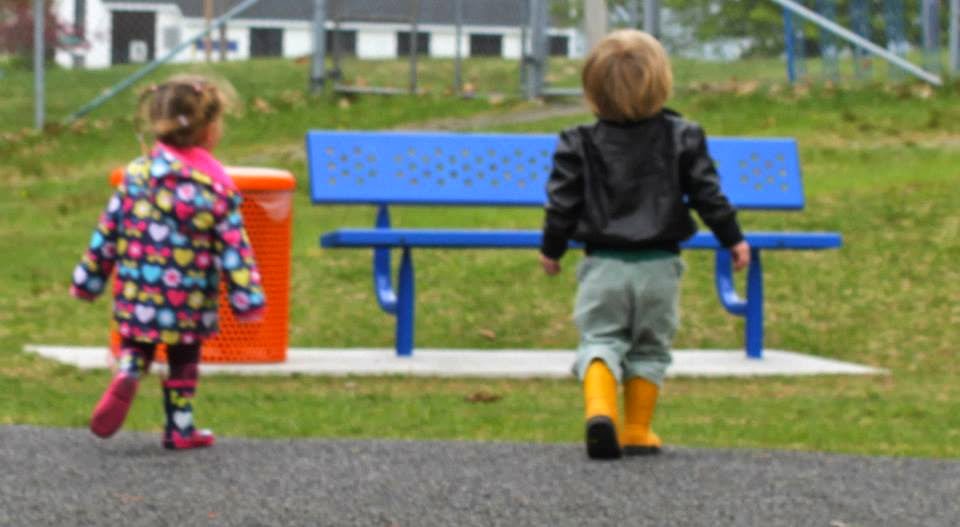 I found this photograph this morning.  It is Amanda's Maryn on the left and Doug's Jacob on the right.  It was taken in early spring 2013 when I was home during my mother's cancer crisis.   Amanda had organized a picnic for the day.  It was so cold, but it was also very nice to be together.  I have always appreciated the effort everyone took on that day to be together despite that cold wind . . .  it was lovely seeing Doug's boys and Maryn playing together . . .  an easy companionship and family togetherness which will hopefully continue on into adult hood.

My Aunt Margot died yesterday.  She was one of my father's younger sisters.   She had a heart attack at the weekend and just slipped slowly away.    That is the second sister my father has lost in a year.  He is the oldest surviving member of his family at the moment, having lost a sister and two brothers in years gone by.   I do not know my father's family like I know my mom's.   There was a language barrier for one thing as they all only speak French and our French is very poor.  We did not spend a lot of time with them when I was growing up.  They lived a lot further away and my mother's family was just a half hour away.  I think I only ever spent time with my father's family on about 3 or 4 occasions that I can remember and of course there was the language thing which made it difficult.  That makes me sad because I have this whole other family that I know very little about and wish I did . . .

Physically walking WHERE Jesus walked,
is less important than walking AS He walked . . .
~Thomas S Monson

Have a great Wednesday!