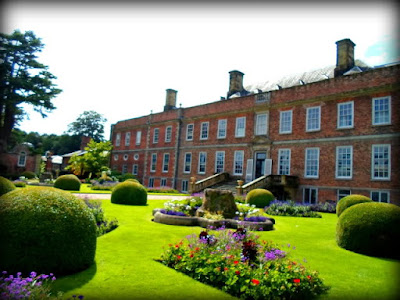 Having had another dry but very cold day yesterday we decided to take Lura and John to Erddig, which is in Wales.  Erddig is a stately home owned by the National Trust. It was originally built in 1682 for a man named Joshua Eddisbury, who had been appointed as the High Sherrif of Denbighshire.  Unfortunately he bankrupted himself in beginning the building of this property and so his debts were bought by another man, a successful lawyer named John Meller who set about furnishing and adding to the property.  He died without a successor and to the property went to his Sister's son Simon Yorke, and the property stayed in the Yorke family right up until 1978 when it was left to the National Trust, who took upon themselves the restoration of the property.  It is a beautiful example of how life would have been for a wealthy family and their servants during the Edwardian Era. 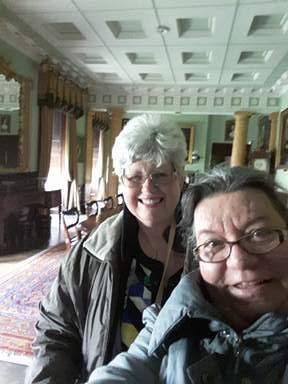 I am not sure if I will ever catch the hang of this selfie business! I try however and this is a photo of Lura and I in the main dining room. What a marvelous house this is, filling with many antiquities and oddities.  Todd and I have been here many times and we just love it.  We always discover something new. 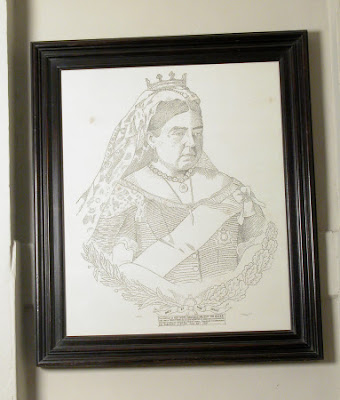 For instance this portrait of Queen Victoria which I had always thought was just a pencil portrait of the Queen, but then yesterday I discovered  that it was much, much more! 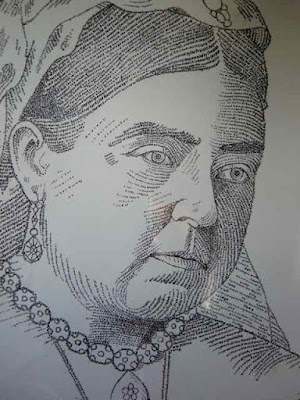 It has been created totally of writing, depicting the story of her life.  I have been here so many times, and yet had never noticed that until yesterday. 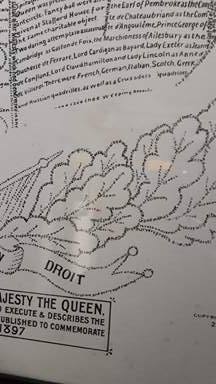 I tried to do a close up of it with my phone, but you can't read the words.  It gibes you some idea of the uniqueness of this portrait however.  Simply Fascinating. 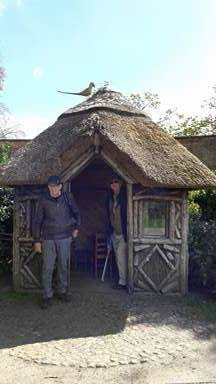 On the grounds there is a thatched Molly House, complete with stained glass windows and a thatched gull sitting on the roof.  We made the boys pose for us here! 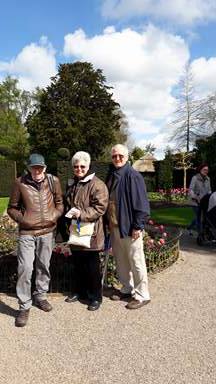 I am sorry for the dullness of the photos.  I took them all with my phone, and clearly it doesn't do such great photos for some reason.  I must need to adjust something on it  Anways, the grounds, although very early in the season, were also quite beautiful. 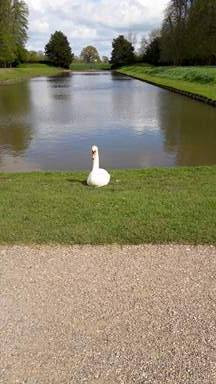 There were swans by the lake, but they seemed a bit annoyed we were there, so we didn't approach them any closer than this! 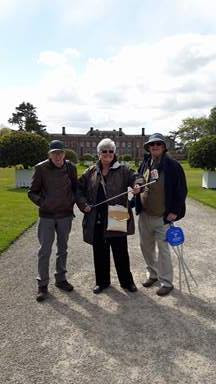 Lura with her selfie stick, lol.  I love Lura and her selfie stick!  We had a really good time despite all the stairs and the cold wind.  (Brrrr . . .  it was cold, but at least it wasn't raining!)

I think today we might hazard a trip to Llangollen, but we will see.  Tomorrow is the tea party!  Can't wait!

Hope you are all well.  I will have a lot of catching up to do after Sunday!  Love you all!