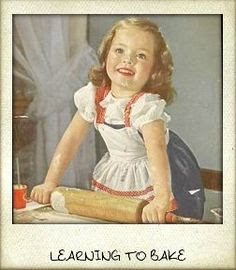 I was five or six when I got my first bake set.  It was a Robin Hood Baked Set and I got it for Christmas. It came in a box that was printed to look like a stove and the box was coloured pink. Inside where tiny, tiny baking tins, a mixing bowl (red plastic), measuring spoons (again red plastic, a tiny rolling pin, and tiny little cake mixes to make cakes and stuff.  I must have been showing a keen interest in cooking, even at that age. I remember mixing some of the cake mixes with water and eating them raw.  lol  I must have also had a really keen interest in eating!

My mother was not a person who really enjoyed anyone being in her kitchen. She liked to do things on her own without any interference.  We were not allowed to stir pots, or help her to roll anything out. I do remember her letting me watch sometimes. That was how I burnt my hand when I was five. I put my left hand fully down on a burner which had just been turned off in an attempt to get on top of the kitchen bin so that I could watch what she was doing.  It didn't half smart!  The whole palm surface of my left hand was burnt badly.  (In retrospect this could be why she didn't like us being in the kitchen when she was cooking.)  It was covered by a huge blister.  The Doctor gave my mother these special gel gauze pads to put on it. I remember she sewed a little cotton bag for me to put over it, which had a drawstring at the top.  This helped to keep my burn dry and clean.

I was in kindergarten at the time.  I am not sure how long I was out of school for, but the first day I was back I had an accident. We always had naptime in kindergarten.  There were sleeping mats that we would lay out on the floor and sleep on.   Naptime was over and I had stood up and was going to roll up my mat to put it away, but was still standing on my mat when the boy next to me pulled the mat out from under me and I fell, smashing the palm on my hand on the floor and breaking the blister.  It hurt like the blazes.  I can remember that.  My teacher (Mrs Thordeson) got the daughter of our next door neighbor who was in Grade 8 in the same school to walk me home. 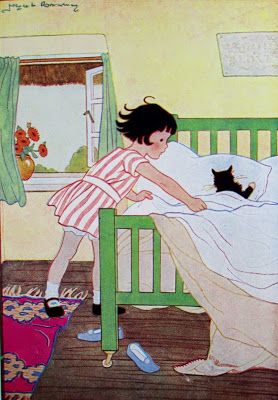 We lived in a really small community at the time. It was on an airforce base near the town of Gimli in middle Manitoba. I think we were about two hours North of Winnipeg.  It consisted of wartime pre-fab metal housing units that housed all of the Military personnel and their families from the base.  Most of the houses for the lower ranks were duplex bungalows, with a two bedroom house on one side and a three bedroom on the other.  The higher ranks had larger houses and more bedrooms and singular houses to call all their own. There was also an area where people had Mobile homes which was at the edge of the community, and smack dab in the middle were two schools.  One was just a long pre-fab building/bungalow which held Grades 6, 7 and 8 and kindergarten, and the other was a pre-fab shaped like an "H" which held grades 1 through 5.  The names of the schools was Goulding School, probably named after some Military guy.  That was where all of my formative years in education was spent and they were lovely years.  I can remember all of my teacher's names and all of my classmates names.  We spent a full six years together before my father got posted to another base and we moved on.  I am still friends with several of them to this day! 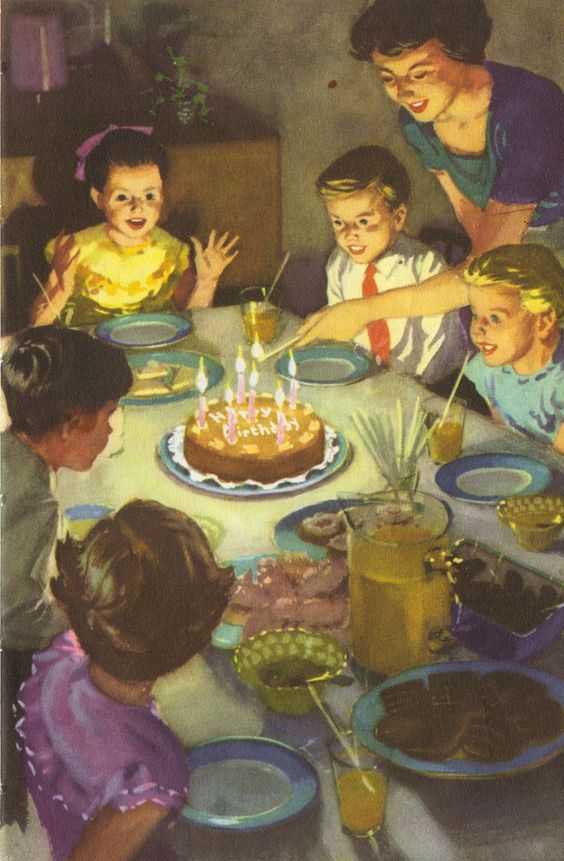 Small communities like that were great.  Everyone knew everyone. There were no strangers, and all of us children played together.  The grown-ups kept an eye on all of the children and if you did something wrong it wasn't very long before your own parents found out and there was hell to pay! Everyone seemed to get along for the most part and I can remember summers spent as a group, playing games together. It was really quite idyllic.  I was always invited to everyone's Birthday parties.  They were always a lot of fun.  Sandwiches, cake, ice cream, games and party hats and bags. At one of my parties my mother made ice cream clowns . . . 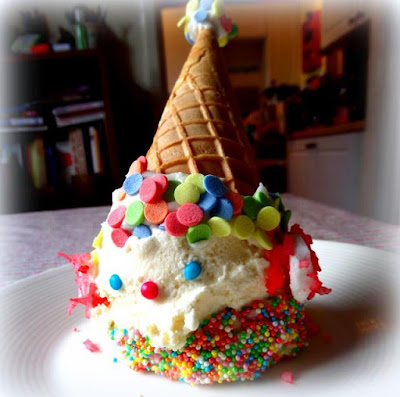 I made them once on the food blog as an exercise in nostalgia. They were not that easy to make actually!  You need to work really fast becaue the ice cream melts. It gave me a deeper appreciation for what my mother had done for us all.  She didn't have a deep freeze either to set them all up in.  I don't think I ever truly appreciated these types of things when I was a child, but as an adult, having done similar things for my own children, I came to acknowledge all of the sacrifice and hard work my mother put in for us.  Our home always sparkled and we were always well dressed, clean and tidy and well behaved.  My mother cooked everything from scratch. There were no convenience foods except for the occasional tin of canned spaghetti, which we thought was a real treat!!  (With fried weiners!) If we got really lucky there would be frozen pot pies every now and again.  Not a touch on my mother's homemade pot pies, but . . .  again, a treat because we so seldom got anything like that! They were really rare.

You could always tell what day of the week it was from what was on the dinner table.  My mother had certain meals for certain days, a set menu as it were. During those younger years we always had our big meal at noon. My father would come home for it from work, the base was so close to us.  Meat, vegetables and potatoes and quite often a dessert as well.  It was usually only tinned fruit, jello or pudding, but sometime we got lucky and it would be a Lemon Meringue Pie or some such!  I can remember my mother always saved out some of the lemon filling and would mix it with some cream for my brother because small children were not supposed to eat pastry for fear it would upset their delicate digestive systems. 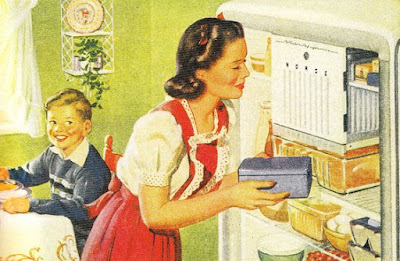 She had an old wringer/washing machine and no clothes drier.  The clothes had to be hung out on the line, in winter or summer.  I can remember the sheets being frozen stiff in the winter.  They would be brought back into the house and hung in the utility room to finish drying at the end of the day.  We had clean sheets every single Friday.  My mother would rotate them.  The top sheet would move to the bottom, because it wasn't considered to be as dirty as the bottom sheet.  The bottom sheet and pillow cases would be changed fresh and new.  When I think of how much work that was for my mother, with her having to wash them in the wringer/washer and hang everything out, along with everything else she did for the home and family, I am amazed.  There were no time-saving appliances back then.  She worked really hard.  And she always managed to look nice when my father got home from work.  Sometimes when my father worked nights she would strip and wax the floors while he was at work, after my brother and sister went to bed.  I can remember her rolling up the carpet. I would sit in my brother's high chair, up out of the way, and watch the television while she worked around me.

We took all these things for granted you know  . . .  a clean home, clean clothes, decent food to eat, a safe and friendly community where we had plenty of friends to play with, and a good education system, and we were loved to pieces on top of it all.  I think back on it now and I recognise that we were truly blessed!!

I know I said I wasn't going to have time to write anything this morning, but Mitzie woke me up early and here I am.  I am going to dash off now however, as time is short! 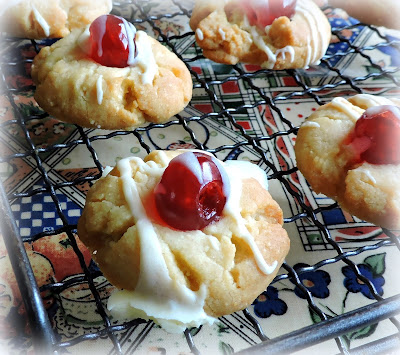 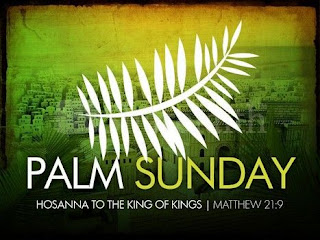 Happy Palm Sunday as we usher in this holiest of weeks.   God bless you all.  Don't forget!