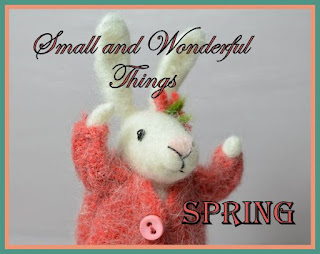 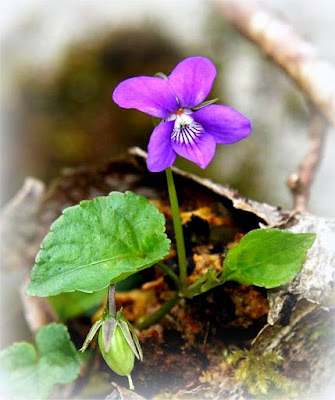 A violet by a mossy stone,
Half hidden from the eye,
Fair as a star,
when only one
Is shining in the sky.
~William Wordsworth

Wild Violets are appearing now.  I love them.   There is a small part of me that longs to pick them . . .  but a larger part of me desires to leave them so that others might also enjoy them.  I'm also not sure if there is a law about picking wild flowers. especially Violets.  I know that back home it is forbidden to pick the Lady Slipper.  These are so dainty and so very pretty. 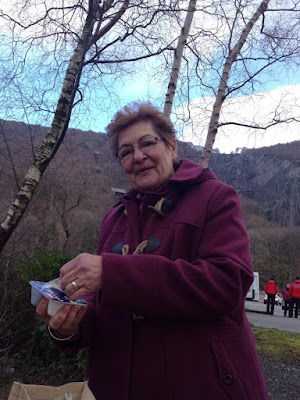 Unexpected impromptu visits from friends.  I love this dear lady.  She is my friend Tina.  She is from South Africa via Australia and the UK.  She has the dearest accent . . .  it's a mix of it all.   She stopped by on Saturday to see how I was, armed with a punnet of fresh eggs and some fresh sausages from the Farmer's Market. It was such a lovely surprise and I was delighted to see her.  She recently had her second knee replacement operation but now is okay to drive.  I think she is amazing at 72.  I love her to bits.   She is a kindred spirit friend . . . rare and treasured.  She gave a talk in church yesterday.  It was  really good.  I think she is a really special lady and her visit on Saturday cheered me to no end. 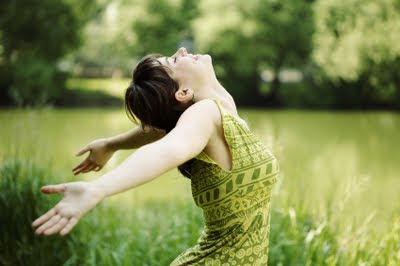 The Relief that is felt when something which you have been dreading and have had hanging over your head for a very long time is finally finished and behind you.  There is nothing quite like it.   Glad to have it over with, just the results to get through now and I am very hopeful that all will be well. 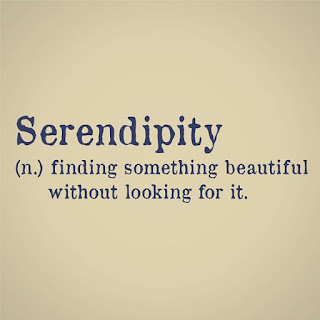 On Friday when Todd and I went into town on the bus . . .  I was feeling so relieved that everything I had been dreading was over and I was feeling on top of the moon.   I had not been into town with Todd in a long while.   I was just feeling Ace and I looked at him on the bus and I could tell that he was feeling Ace also.  He just looked so happy.   We were just so happy being together and we were in exactly the same space.   I hadn't experienced that in a while and it was  . . .  serendipidous!

My secret pleasure  . . .  when Todd has to go out with the Missionaries or some such . . .  I watch Cooking Television.  I love it.  He is not so fond so I save these moments for when he is not around.  If you are like me you can recognise those hands.  If you are not, I will tell you who it is.  Nigel.  Nigel Slater.  He's my favourite television cook.  I not only watch him on the telly  . . .  but I have all of his dvd's.  He just cooks the way I like to cook and the way I like to eat.  No pretensions . . .  just good simple food done in a way that brings out the best of all the flavours involved . . . the food is the star.

An unexpected bouquet of flowers from my sweetie pie.  I said to him . . .  normally men only bring unexpected flowers to their wives when they've done something wrong . . . I am grateful for a husband who brings them to me  . . .  "just because"  . . . that makes me happy.


I re-discovered this video I had taken of Mitzie wagging her tail a loooooong time ago.  It made me smile.  I hope it makes you smile too.

We are off to Manchester this morning to a Senior Missionary Training/Potluck meeting.  I love those!

May your week ahead be filled with an abundance of small and wonderful things. Along the way don't forget . . .