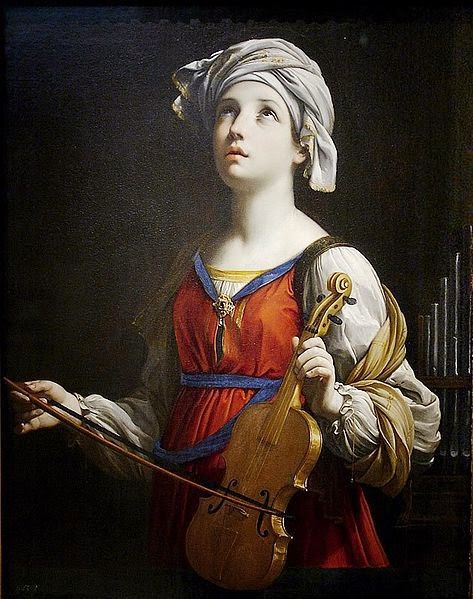 "Music, when soft voices die
Vibrates in the memory."
~Shelley

Looking in my daily devotional book today I come across  the reminder that today is St Cecilia's Day, and I wonder to myself  . . .  who is St Cecilia?  You know me . . .  I just had to find out.

Saint Cecilia, Virgin and Martyr,  is the patron saint of music. She was martyred for her Christian faith in A.D. 176, under the Roman Emperor Marcus Aurelius, when both she and her husband were put to death. She was high-born Roman of a Christian family, and a great Church was built over the house in Rome which is said to contain her body, the Church of St Cecilia Trastevere. The present church was built in 1599, when Stefano Maderno claimed to have seen the body of the saint and carved her the sculpture of her lying on her side, uncorrupt, as he saw her.

"I have in this marble expressed for thee the same saint in the very same posture and body."

There are legends about her attracting an angel to earth by her singing and of her singing at her martyrdom. The thirteenth century Golden Legend tells of how she sang as she took three days to die:

"And while the organs maden melody,
To God alone in heart thus sang she."

By far the best account of her life in English is to be found in The Second Nun's Tale of Chaucer's Canterbury Tales. It is a dramatic story. The young Roman maid was brought up from the cradle in the faith of Christ and His Gospel. She prayed for her virginity. On the night of her wedding to Valerian she confessed that she had a guardian angel who would slay Valerian if he touched her either in love or lust. The naturally somewhat suspicious bridegroom demanded to see the angel. Cecilia told him that he must first be baptised by an old man named Urban, later to become Pope Urban 1. Valerian's brother, Tiburce, was also baptised. Valerian was then visited by the angel. Subsequently the brothers were arrested and questioned by the prefect, Almachius. When they refused to bow to Jove they were beheaded.

Cecilia refused to abjure her Christianity and was ordered to be burnt to ashes in a bath of flame. She sat in the bath for a day and a night without even sweating. Finally an executioner delivered three strokes to her neck. Her wounds were bound up and she continued to preach and pray for three more days. Urban took her body and buried it at night.

St Cecilia's memory has been kept alive by poets, writers, painters and musicians. The first record of a music festival in her honour was held at Evreux in Normandy in 1570. When the Academy of Music was founded in Rome in 1584, Cecilia was adopted as the patron of Church Music and the 22nd of November was chosen as the date for her Patronal Festival.

But bright Cecilia raised the wonder higher:
When to her Organ vocal breath was given
An Angel heard, and straight appear'd
Mistaking Earth for Heaven.
~Dryden's Song 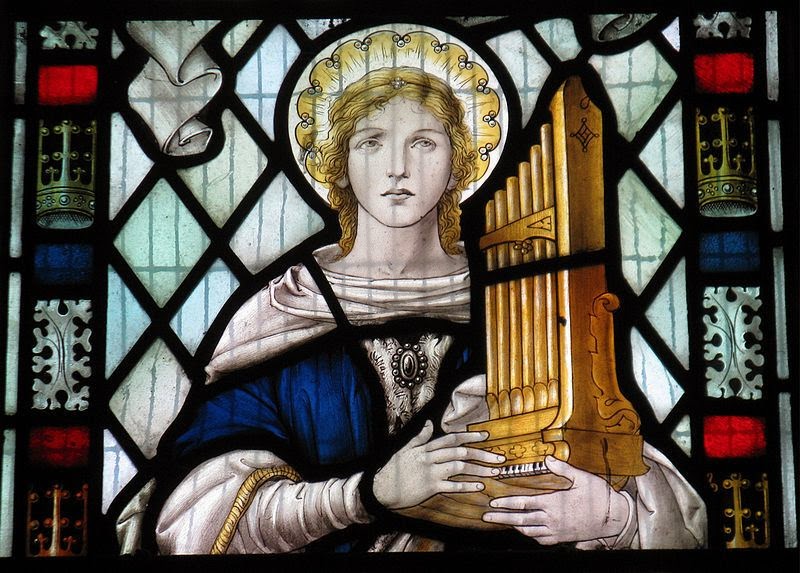 Legend or fact?  I don't really know, but I did enjoy learning more about this Sainted woman this morning.   I don't really pray to Saints, but I know that many do.  My Aunt Thelma, a very devout woman, always prayed to the Saints.   She always told mom whenever she couldn't find something that she should pray to Saint Anthony, the finder of lost things.   And Mom says it usually worked.

I normally pray to Jesus when I can't find something, and that usually works too.  I normally find what I am looking for quite quickly after that.

I am a person who loves to learn the stories of these devout people throughout history have been willing to die for their beliefs.  There are still people in the world today who are being martyred for their faith.   There is a big part of me that likes to believe that I would do the same if my faith was put to the test . . .  that I would be willing to die for what I believe to be true.  I hope and pray that I never have to find out!

We have a builder coming this morning to do an estimate on the cost of new doors and windows.  I am a bit surprised that it is happening so quickly.   It usually takes a lot longer for our landlord to get things done, owing mostly to the fact that he lives in Ireland.   When we had our shower room put in a few years back, the building inspector told us our windows were a fire hazard as the upstairs windows were not large enough to provide for an escape should the need arise.

The top part of this front picture window is also broken and you can feel air blowing through it when it gets quite cold and windy. Todd has tape over it, which has proven rather ineffective but he feels quite good about putting it there so I don't say anything . . .  apparently the last tenent that our landlord had locked herself out of the house one day so they broke the window by forcing the top part of it open to put a child through to open the door for them.

Our front door is completely glass, which has always made me nervous because glass can be broken and I have always worried that someone would break the glass to try to get in and steal our belongings.  We don't have insurance so if they did that, or if we did have a fire, we would be at a complete and total loss.  I know that insurance is something that you really should have, but we have just never been able to afford it.

Instead of a thought for today and in honor of Saint Cecilia I will leave you with a beautiful music video.   This was a video done by the BBC to raise money for the Children in Need Telethon.  I quite like it and I think you will too.   Click the pause bars up above and listen.  How many of the singers do you recognise?

In the English Kitchen today  . . . Apricot and Prune Puddins with a Lemon and Butterscotch Sauce.

Have a great Saint Cecilia's Day!