Lovely are the borderlands
where  Wales and England meet . . .
the secret lands of hidden vale
and mountainous retreat.
A can of noble castles
marks the ancient boundary . . .
from Chepstow to the old walled town
of Chester on the Dee.

Blood and tongue
are mingled here
where once were feud and strife . . .
loyalties and cultures merged
into a common life . . .
And here is beauty unsurpassed,
unspoiled by vandal hands:
The wild romantic beauty
of the lonely borderlands . . .
~Patience Strong

It has a history that goes back nearly two thousand years, having originally been built as a fort built by the Romans in the year 79AD.  Through the years many battles have been waged here between Saxon Kings and the marauding Welsh.  In fact, I think it's only been in recent years that the city by-law disallowing Welsh-men to be within the city walls after dark has been rescinded!

It was once a great sea-port until larger vessels took over and Liverpool was a much easier port for these to access . . . but the city did not die, even if the sea trade industry did.  It's natural beauty has turned it into a mecca for wealthy people the world over to come and holiday . . .

We boast a lovely Race Course where  quite a few races are held during the racing season.  I do so love to be in town when the races are on, even if the traffic makes it somewhat of a pain to get in on those days . . . the town centre is filled with lots of Dandies and their Ladies, all made up in their finery . . . the men suited and tied . . . women wearing outrageous hats and high heels.  It is comical to watch them walking on the cobbles . . .but a fabulous air of gaiety is present and really quite intoxicating.  It is hard not to get caught up in it. 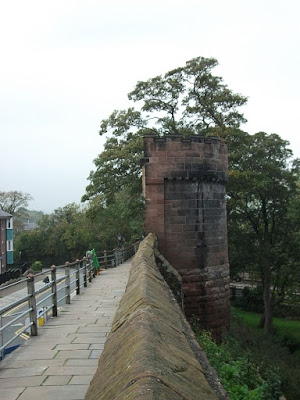 There is an ancient wall which circles the inner city area, dating back to the time of the Roman occupation.   You can walk it's entire length, some two miles, which form an almost entire circuit of the city.  You can stand where King Charles I watched his troops fighting on the meadows during the great civil war.  In fact it was very near here that King Charles I was taken prisoner.   Indeed there is a pub in the city centre which dates back to that time and is purported to have been the King's hiding place before he escaped across the bridge and out of the city . . .

All history aside . . . I just love this city's great natural beauty and charm.   It is lovely to go into town on a sunny day and walk about.   There is a lot to see and to do . . . one can take a picnic lunch to the  park, which is beautiful with all of it's flowers, or even sit down by the river and watch the riverboats pass, feed the swans or ducks . . . and feast on Mr Whippy cones of ice cream, with Cadbury flakes stuck inside . . .

We even have a museum, the Grosvenor Museum,  which you can explore completely free of charge.  There are often different exhibits showing besides Chester's natural history . . . The Grosvenor Museum exhibition programme covers a diverse range of topics from the Vikings to portraits, habitats to transport. Most explore the subject’s links with Cheshire and the surrounding area. I always find it a fascinating visit as some of the exhibits change from season to season . . .

We also have the East Gate Clock, which is a turret clock built above the Eastgate of the ancient walls of Chester. The clock was added to the gate during the  Victorian era to celebrate Queen Victoria's diamond jubilee.  Considered to be  a landmark of Chester, it is the second most photographed timepiece in the United Kingdom after Big Ben! 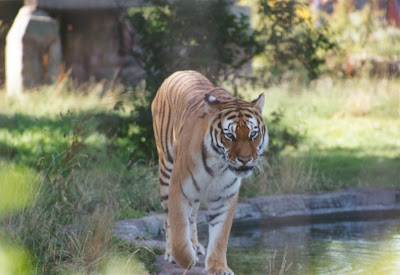 We also have one of the country's finest zoos.  You can check out webcams of different areas here.  Todd and I have not been to the zoo yet.  We started off to go one day, but so did about a billion other people so we just turned around and went home.   We don't like crowds very much.  Apparently there are over 11,000 animals housed there and 110 acres of gardens.  It's a very popular spot, but like all zoos, it's expensive to get in . . . a lot of families buy season passes though and it's something the children love to see.

Most often though Todd and I just go down and sit by the river on sunny days . . .  just enjoying being together.   We amble along it's shore whilst sunlight dapples our heads through the leaves of the trees and the water glints and glistens, sparkling with a thousand diamonds of light . . .

“The happiest people I know are not those who find their golden ticket; they are those who, while in pursuit of worthy goals, discover and treasure the beauty and sweetness of the everyday moments.”
~Dieter F Uchtdorf

Happy Saturday everyone!   Whatever you do, wherever you go, whomever you are with . . . may you find joy . . . and the bliss of just being.