I am often asked how can I do this every single day.  I've been doing this for years in one way or another, this penning of my thoughts and feeings.   Its not because I think that anything I have to say is really profound, but I think of it as being somewhat of an online journal of the goings on in my life and my mind.  I do it more for myself than for any other reason.  The fact that anyone else wants to read it is like the icing on a cake.   I can remember way back when I first started keeping an online journal and I got my first comment.  Thrilled beyond measure.  I was positively over the moon and then some.   It wasn't long before I was getting bazillions of comments.  That never happens anymore for some reason, probably because I am somewhat boring . . .  but that's totally okay with me because for me it was and is and never was about the comments . . .  its always only ever just been about me writing down my daily thoughts and feelings 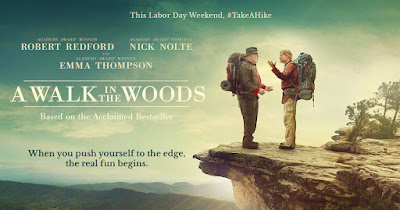 Last night was movie night in our house and we chose to watch "A Walk in the Woods," starring Robert Redford, Nick Nolte and Emma Thompson.  Emma wasn't really in it very much, just a bit at the beginning and at the end and a brief flicker in about the middle. 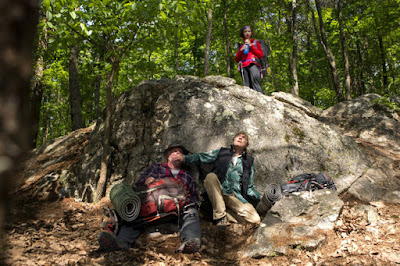 It was a comedy about an older man who decides he wants to walk the Appalachian Trail. Author Bill Bryson (Robert Redford), after living for ten years in Britain, returned to New Hampshire. Now in his 60s, he has been living there peacefully for the past twenty years. A television interview reports that he has published several popular books and there is speculation he will be writing more. Bryson, however, has no such plans. Bryson and his wife Catherine (Emma Thompson) attend a funeral. Not being an outgoing person, he afterwards takes a stroll on the nearby Appalachian Trail. He suddenly decides he will hike its entire length. Catherine objects, presenting all kinds of accounts about accidents and murders on the trail. She relents on condition that he not travel alone. He agrees and searches for a friend willing to join him. Everyone declines his invitation; some declare him insane. Finally, he is contacted by Stephen Katz (Nick Nolte), an old friend who offers to be a hiking companion. Despite appearances, Stephen claims to be fit enough for the challenge. Bill's wife is unhappy with his choice, but relents.

What follows is an entertaining, lightly charming comic adventure, that we both thorougly enjoyed!  Somehow I don't think either one of us will ever be up to walking the Appalachian Trail, although when I was a lot younger is was a thought I had entertained at one point.  I am far past that now.  The scenery was stunning and it was quite funny in places.   I love the friendship between these two old guys which was a bit precarious at the beginning of the film but which deepened as the film went on.

So Todd has an appointment on Monday for an MRI scan at the hospital and a biopsy scheduled for next Wednesday morning.  The hardest part of all of this is the waiting and the not knowing.  You feel as if you are in a bit of a "no man's" land.    I don't know which is worse.  The not knowing, or the knowing . . .  but I expect we will soon find out.   We are both remaining positive about it.  Worry never changed a thing.  I have been searching on Dr Google and I found one page which said that 98% of men with Prostrate Cancer are still alive 15 years later.  Todd said that was a good thing, because at 78 years of age, to be still alive at 93 was probably not bad odds.  However I found another page which said that one man in the UK dies every hour from Prostrate Cancer.   I did not share that news with him.  Nothing negative.   He has expressed however that he prefers quality of life over quantity of life.  We have a friend who has leukemia and he and his wife spend at least 7 hours of every day sitting in the hospital five days a week, and has been doing this for several years now.  Todd says that is not life and he is not wanting that.  We will see what happens.  Your continued prayers are very much appreciated.

But it could always, always be worse.   Another friend of mine, a dear friend, who lost her husband just two years ago, has been diagnosed with malignant melanoma.  She is only 55, and the melanoma has been on her leg for several years now.  They were treating it as keloid scar tissue.  Her name is Kathy and if you could please, please add her to your prayer list that would be very much appreciated as well.  I know she must be terrified.  Prayers of comfort and calming would be really appreciated.  We spoke on the telephone several days ago and she is putting a brave front on it all, but I know how she is really feeling inside, having been in somewhat the same place albeit for a different reason.   You try not to think about it, but it is always there niggling away at you, no matter what

I am looking forward to calling my mum this afternoon.  I do enjoy our Sunday afternoon conversations so very much.  I used to enjoy getting her letters each week and then they went down to once every two weeks.  I saved them all because I knew that one day they would stop and they have.  I never get a letter anymore, which makes the ones I do have all the more precious.  I take one out every now and again and read it.  They always make me smile.  I appreciate the phone calls even more as time goes by.   Its not that we talk about anything profound.  We mostly just talk about the same things each time . . .  the weather, whats for supper, the cats, my father, the past . . . but there is a blessing which is mine each time that we speak, each time I hear her voice and hear how happy she seems, how much fuller her life is than it had been in years.   I don't think any of us ever realized that she was lonely before my sister came to live with her.  I don't think even my mom realized this fact.   Her life is infinitely fuller now and filled with lots of activity around her.  I think that is something which elderly people need . . .  company to keep and activity around them.  She doesn't go far these days, just to the Chemist, the bank and Wal-mart and sometimes the grocery store.  Oh and her Doctor's appointments, etc.   She still gets her hair done and permed every couple of months.  She loves it when the Avon lady calls.  I think my mom is the oldest and best Avon customer, and probably has more Avon products in her house than anyone on the planet.

She used to be an Avon representative at one time and a pretty darned good one.  My father used to help her put her orders together.   She won prizes and all sorts, and even trips.  My mother has always excelled at anything she has done.  We've always been really proud of her.  If she is only ever half as proud of us as we are of her, then we are very lucky people!

It is Stake Conference in our Stake this weekend.   Yesterday was the Priesthood Leadership meeting and the Adult Conference in the evening.  Today will be the family session in the chapel at 10 am.  We didn't go to the Adult session last evening.  Todd was really tired and I confess so was I.  Neither one of us could face going out into the dark and the cold.  It gets like that for us when the nights draw in.  Neither one of us really likes driving in the dark.  When I was a child I loved driving in the dark.   I never got car sick when we drove at night, so I could enjoy the travel without feeling nauseated.   I loved looking out the window and seeing all the lights of people's houses, etc.  especially in the distance.   Funny that.   I used to love to go walking in the dark as well and the small glimpses you got of people in their houses from the roadway as you walked past.

People are just so fascinating.  Everyone has  a story.  Some are happy. Some are sad.  Some are inbetween.  Every story matters and has value.  I think that is why I enjoyed working at the old people's home when I worked there.   I loved listening to some of the stories the residents had to share.  All they ever really wanted was for someone to listen.  As a Care Assistant I could not often sit and listen because I had so much other work to be getting on with.  Most elderly people in these homes hardly ever have any visitors.  Not even at the holidays.   I think they should employ people to visit the ones that have no family, so that they have a visitor now and again.  Most care homes have resident cats, but I think that they need resident visitors also.

One of our neons died in the fish tank.  I noticed him on Friday.  I dont know how long he had been dead, his eyes were missing.  (I know YUCK!  Too much information!)   We are down to three neons now.  We started with five.  I love to sit and watch the fish.  Its very relaxing and interesting.  I never thought it would be. We have three Dwarf Gourami, two Danoi, two platies, four tiny guppies, two larger guppies, a catfish and a shrimp.  They all seem to get along very well together.

And I guess that is about all I have to share with you today.   I reckon I have gone on long enough!  I shall leave you with a thought for today  . . .