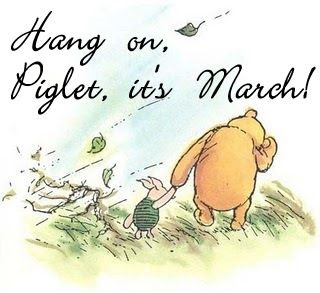 When I went out
the sun was hot.
It shone upon
my flower pot.
And there I saw
a spike of green
that noone else
had ever seen!
On other days
the things I see
are mostly old
except for me.
But this green spike
so new and small
had never yet
been seen at all!
~Barbara Baker

Take heart dear friends.  Spring is well and truly on it's way.  I see it everywhere.  The camelia by the front door is all in her glory at the  moment and green spikes of daffodil are plunging up through the ground all over the place.  The narcissi are in bloom, and the crocus too . . . 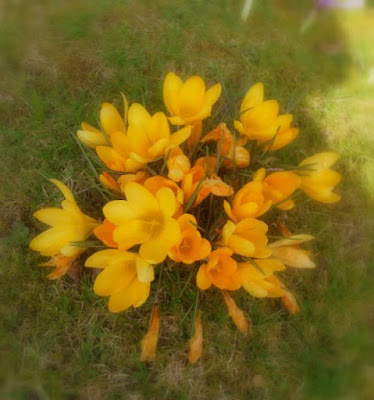 The season of yellow is about to burst upon us.  I can feel it in my bones.  I feel like Lorelai Gilmore when she smells snow . . .  except I can smell Spring!  And it is in the air.   It doesn't matter that just two days ago we were sitting in our friends house in the Welsh Hills watching goose-down feather snow flakes fall . . . Spring is coming . . .  and is almost here. 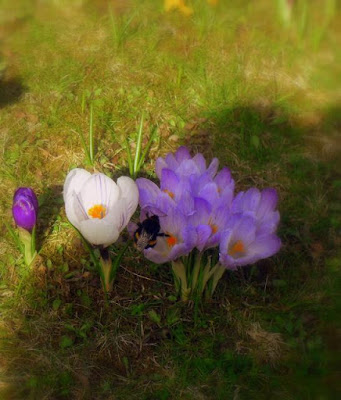 In North America it may be the Robin which is the harbinger of Spring but here in the UK, it is the bumble bee and as soon as we see them bumbling through the garden, we know Spring is on its way.

But March . . .  will it bluster in like a hoyden bursting boisterously into a quiet room?  Well, so far it is behaving itself.   Yesterday was blustery and cold and the rain fell in great torrents . . . the wind blew down the Chimney brest, howling like a banshee.  The two Missionary sisters stopped by to warm their hands.  We warmed them with hot cocoa and Mitzie did her best to make them feel welcome. 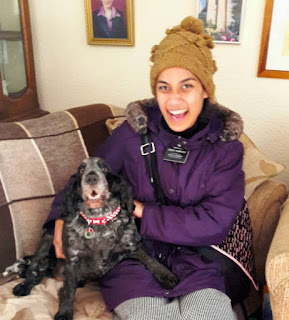 This is Sister Taumalolo from Sydney, Oz.   yes, her last name is a bit of a tongue twister.  She is so lovely and I know that she feels the cold, but it doesn't get her down in the least. 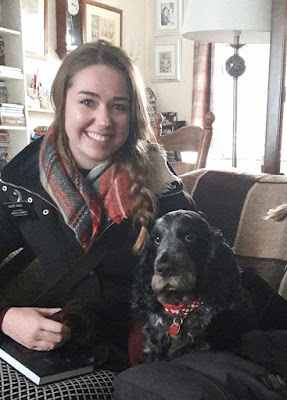 And Sister Carle from Idaho.  She is a lovely girl also.  Being from Idaho, she is more used to the cold.  I have so much admiration for our young Missionaries as you know.  They stopped by yesterday to see how we were doing and how Todd's first radiation treatment went.

He was home a lot sooner than we expected him to be, despite the ambulance being late to pick him up, his appointment running a bit later than anticipated, etc.  There are always hiccups, but so long as you get there in the end, that is what counts.  One down, nineteen to go.  We can do this.  I feel guilty saying we however, as it is really just Todd who has to do this.  I am just here for support and to help him through it all, the best that I can.  It felt odd . . .  me staying home while he went off to face his treatment on his own.   I was on pins and needles the whole time, and even Mitzie was a bit restless, but I had a good dinner awaiting his arrival back home, and Mitzie was there with welcoming snuffles and cuddles.

Today is another day. 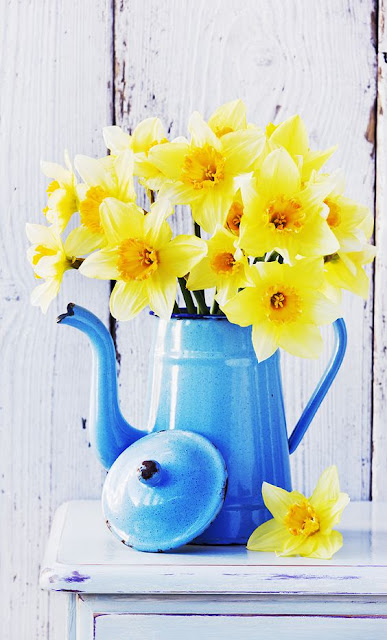 As well as being the first of March, today is also St. David's Day.  St. David is the partron Saint of Wales and represented by the Daffodil.  It is the national flower of Wales, which is another country you know.  It is not a part of England.  It is a country in its own right, the same as Scotland, and Ireland, etc.  We are all a part of the British Isles, the United Kingdom.   People get a bit upset when they call the Queen, the Queen of England, because  yes, although technically she is the Queen of England, she is so much more and properly known, she is the Queen of the United Kingdom.


We have not seen much of her
or Prince Philip
since well
before
Christmas.

I have gotten four chapters finalized in my cookery book thus far.  Only eight to go.  I can do this, and this time I am talking only about me.  Its fun though and I am enjoying the process. I had to go back and re-do all of my earlier chapters because nowadays they don't want two spaces in between sentences. Its changing a whole lifetime of learning. I need to consciously make an effort which each sentence to just leave one space. Its hard and I often forget and then have to go back and redo. Its called progress.

And with that I will leave you with a thought for today . . . 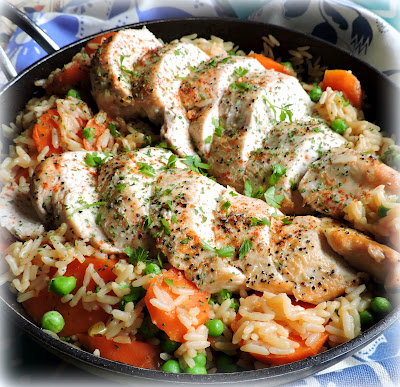 Cooking in The English Kitchen today  . . .  Chicken & Rice.  This is simple, delicious and quite healthy.  We love it.

Have a fabulous first day of March!  I hope its not too blustery for you!  Don't forget along the way . . .