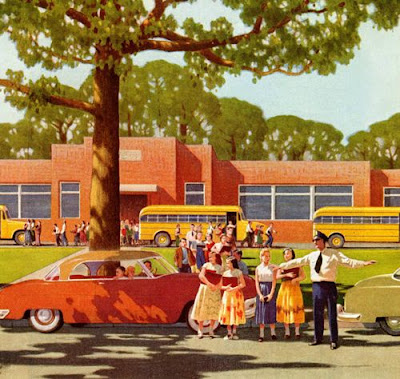 There's a large Primary School not too far down the road from where we live. (That is what they call an elementary school here in the UK.)  During term time our days are punctuated with the sound of children at play. Its a happy sound really.  It was the same down South.  There was a Primary School at the bottom of the hill, and we could hear the children at play all the day through.

It is a lovely sound and reminds me of when I was at school.

I was sitting here yesterday and all of a sudden I thought to myself  . . .  where is the school bell?  I often hear a whistle being blown, but I never hear a bell, and then I got quite nostalgic thinking about my childhood and bells  . . .  I had a childhood quite punctuated with the sounds of bells ringing  . . . 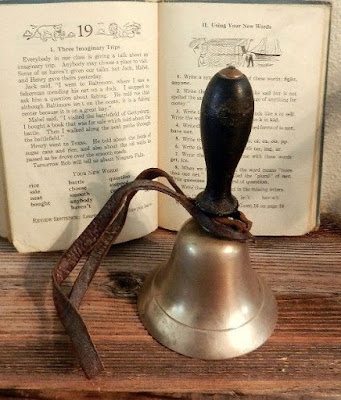 At school it was a bell that told us that it was time to line up and get ready to go in as our day was about to begin.  Girls in one line, boys in another and by classes. Each class had their own entry door. Girls went in first and boys second.  It happened at the beginning of the morning, after recess, after lunch, etc,   If I recall correctly it was the Principle of the school who had charge of the main bell and who would ring it and I believe that there was a bell rung at the end of the day as well.

There were bells for fire drills and all sorts.  We knew from where we were and the time of the day what was going on and what we needed to do. A prolonged bell ringing during class time always meant a fire drill and we were to assemble out of doors. 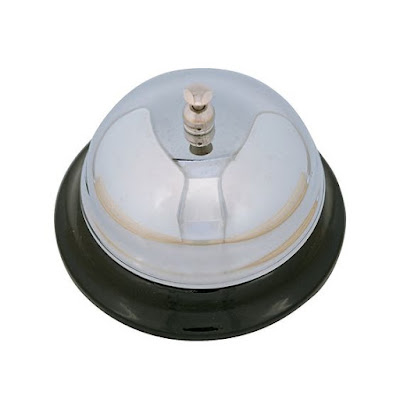 There was also a bell in each classroom. Each teacher had their own bell on their desks, and these sounded different than the main school bell. The teacher would ring them to get our attention, or call us to order in the class. It was not quite as loud as the main bell. 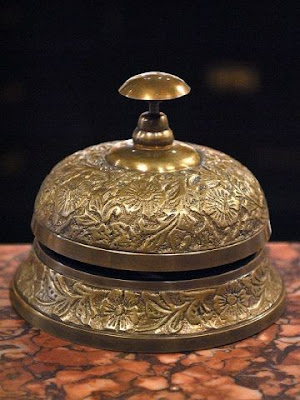 A more ornate bell was the Hotel/motel front desk bell. A way to call a clerk in from a back office if nobody was manning the desk and announce your arrival.  Also a way for the Hotel staff to call someone to take your cases up to your room. These were a bit more ornate than the ones our teachers had on their desks.

Some shops had them as well, like the Chemists or drugstore. 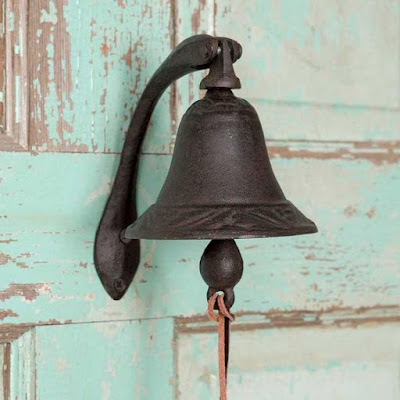 Farms had dinner bells.  A bell that the farm wife would use to tell her husband and everyone else that dinner was about ready and it was time to wash up. My first husband came from a farming family and they had a dinner bell outside the back door next to the kitchen and I remember my mother in law using it.  I have a dinner bell on our garden shed.  It works properly, but I never use it. It is just for decoration. 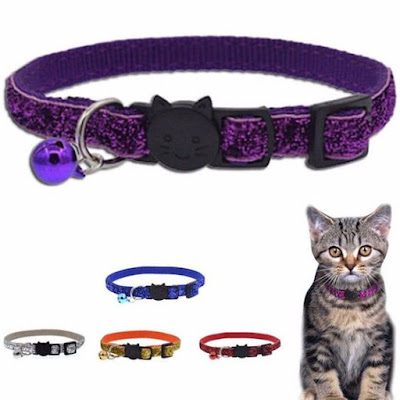 Our family cat had a bell on its collar.  I am not sure why, as it was not an outdoor cat.  Bells on cats alert birds to their presence and in so doing keep them a bit safer from the resident feline. 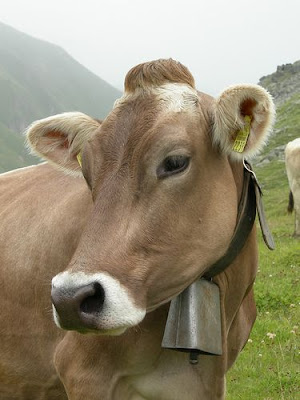 Cows and sheep had bells, and the bull certainly had a bell.  You still hear cowbells when you are in some European countries.  I am thinking of Austria and Germany in particular, but I haven't travelled much in the other countries. It is quite a pleasant sound, the sound of cowbells  . . . 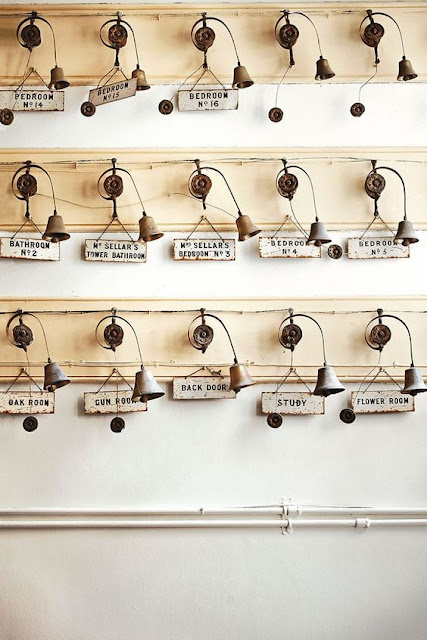 They had bells in big houses so that the people who owned them could get the attention of staff working for them. You see them in the Servant's Hall on the show Downton Abbey and when I worked at the manor there was one in the downstairs hall there as well, although it was just for show.  I wonder how the servant's knew which bell they were to answer unless they were actually looking at the row of bells when they rung?  Did each bell have its own sound?  Or was someone assigned to watch the bells?  I wonder   . . . 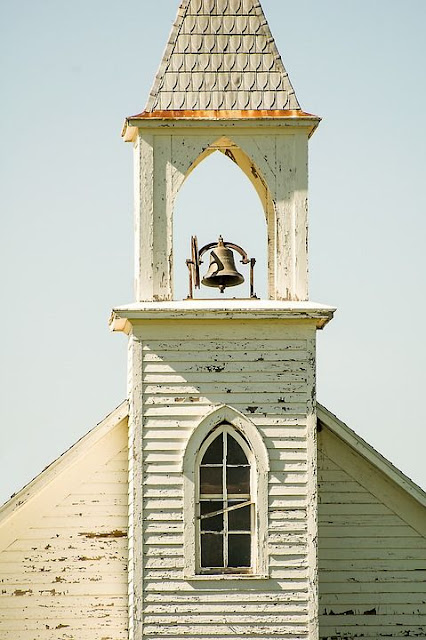 Churches had bells and they still do in a lot of churches in the villages around about here in the UK.  Even the cathedral in Chester has bells. They ring out at 12 noon and I suppose they ring on Sunday mornings. I'm not sure as I am always at my own church in Wales and we don't have bells.  We used to have a buzzer bell to mark the end of Sunday school . . .  a five minute warning intended to let the teacher know it was time to wind it up so that we could go on to Relief Society or Priesthood.  The village church when I worked at the Manor used to ring its bells every morning at 9 and again at noon. I would hear them as I walked down to work of a morning. It was a really pleasant sound.  And I remember the bells of our church we went to when I was a child ringing on Sunday mornings. I love the sound of church bells. 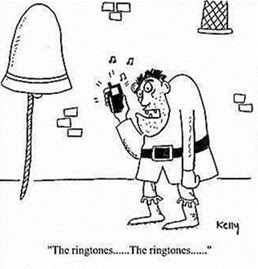 Which reminds me of a joke my Uncle Harold once told about a bell ringer.


A church's bell ringer passed away so they posted the position in the local paper and a man came in with no arms wanting the job. The clergy weren't sure he could do it, but he convinced them to let him try it. They climbed the bell tower and the guy ran toward the bell and hit it with his head. They gave him the job. The next day he went to ring the bell, tripped, bounced off the bell and fell to the sidewalk below.

Two guys were walking past. One asked, "Do you know this guy?" The second guy responded, "No, but his face rings a bell."

The next day, the dead bell ringer's twin brother comes in for the again vacant bell ringer position. He also has no arms. They lead him up to the bell tower, he runs at the bell, trips and falls to the sidewalk below.

The same two guys walk by. The first asks, "Do you know him?" The second guy responds, "No, but he's a dead ringer for the guy we saw yesterday." 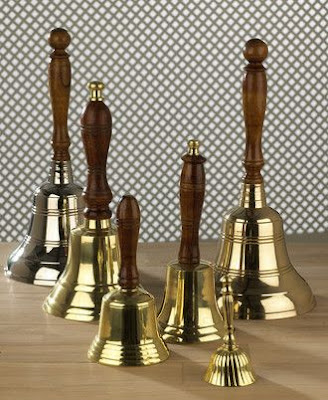 Our Douglas is quite musical and when he was a teenager he played in the Bell Choir at church.  It was very serious business.  They wore white gloves and everything.  I did so love to listen to them play.  It was quite enjoyable! 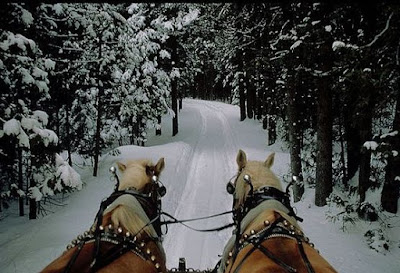 Another lovely sound is that of sleigh bells.  "Sleigh bells ring, are you listening?"  How very wonderful  . . .  the sounds of the runners of the sleigh whistling through the snow as the horses tinkle ahead.

It reminds me of the Christmas Sleigh Ride we planned one year when my children were small and my youngest son had not yet been born. It was on Boxing Day. My sister was there with her daughter, mom was there, all of my in-laws and their children were there.  We had planned it weeks ahead of time.

We had no snow, so it ended  up being a waggon ride over frozen ground, but it did start to snow when we were partway through the event so that was good.  Everyone had a great time and a wonderful memory was made for us all.  Even my mother, who was not a person that enjoyed the outdoors or the cold, enjoyed it.  The kids had a great time grabbing each others hats and throwing them off the waggon, so then they would have to jump off, get their hats and chase the waggon and try to get back on. You know to this day my oldest son will tell you that is one of his favourite childhood Christmas memories! 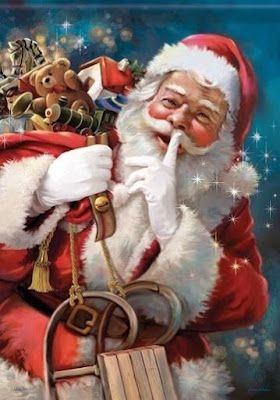 You know to this day (Spoiler alert) I can remember the sound of Santa Claus's bells on Christmas Eve of the year that I was finally told that there was no such thing . . .  the mind is an amazing thing, is it not? 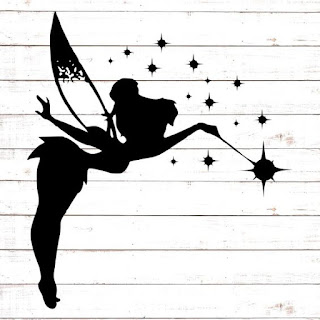 "It is the fairy language. You ordinary children can never hear it,
but if you were to hear it you would know that you had heard it once before."
~Peter Pan 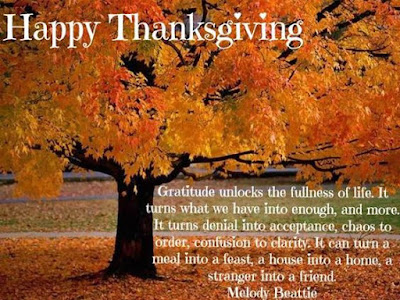 To all of my Canadian family and friends, I would like to wish you a very Happy Thanksgiving!

Oh I do miss having a Thanksgiving over here. Its not a holiday that the British really understand. I have tried to do them in past years, but they never feel quite the same.  If we celebrate at all, we tend to do it more at the American time because turkey's etc. are much easier to find then, with it being closer to Christmas!  My sister is having our Eileen over to hers along with my dad. Eileen is really looking forward to it. Her husband has gone on a trip to Ontario with his parents.  Eileen loves to visit my sister.  I know they will have a great time.

Eileen always loved spending time at mom's.  One of her favourite things was to help mom with the dishes afterwards because Grammy always talked to the dishes.  I loved doing the dishes with mom also  . . . oh to have those hours back  . . .

A thought to carry with you ... 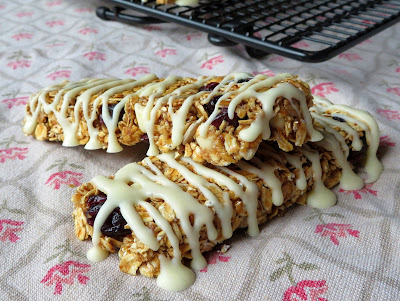 Have a great Saturday.  I think we will be doing more clearing out today. Tina and Tony stopped by yesterday so we never got very far. I'm a bit limited anyways because of my back.  Enjoy your day and don't forget!