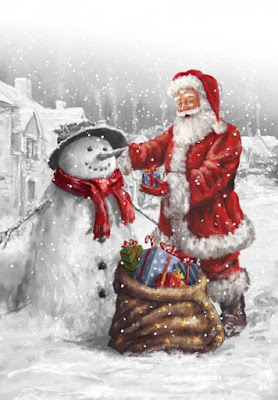 Christmas is a holiday season which is primarily a thing of the spirit, or it should be and it can be observed anywhere, at any time and in any manner . . . just so long as the spirit is there.  One thing which I have always loved about the UK, is that . . . in most smaller urban centres . . . there are no Santa Claus's on every corner, or in every nook and cranny.  One Santa's Grotto . . . and one Santa Claus.

I think that is the way it should be everywhere . . . to have a pool of Santa Claus's makes a mockery of Saint Nicholas.  He should not be seen I don't think . . . but should remain that mysterious character who comes down your chimney late on Christmas Eve, somehow manages to squeeze his girth and his pack magically in and out of your homes, with a simple nod of his head, a wink of his eye . . . and a tap on his nose, while his reindeer paw and prance upon the top of your roof, impatiently awaiting their next stop. 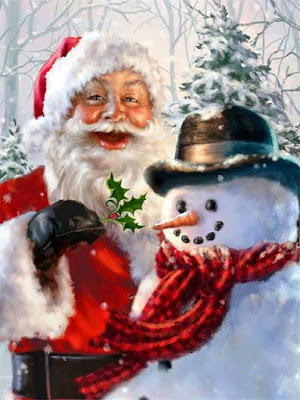 What child is going to truly believe in the magic of Christmas if they have seen ten Santa Clauses  in shabby costumes all the day through . . . some even smelling of diet coke  or coffee . . . or heaven forbid alcohol.  Santa shouldn't smell like that.  He should smell like peppermint and fir trees . . . and the Great White North.  It would appear that in very large urban centres though and cities . . . Santa doesn't have to come down the chimney at all in the wee hours of the morning . . . he quite simply has to step out of the supermarket and walk down the street, and there you have him.  What is the fun of that?

I was actually quite terrified of Santa Claus when I was a child.  He was this mysterious figure . . . my mother had a rather spooky Santa Claus Mask that she hung on the living room wall each Christmas season . . . he was rather Germanic in looks with a tall pointy hat . . . he wasn't round and jolly like the one I saw in my story books.  He looked more like a mean old priest wearing a red pointed hood.  I suspect this was something she had picked up in Germany when we had lived there . . . and it was not my favourite thing. 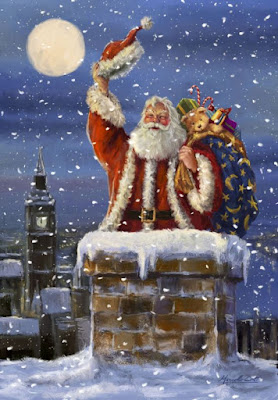 The only time I remember going to see him in a shop was in Gimli, Manitoba.  It was actually in a closed down shop, which had been opened up just for this purpose . . . it was not a Grotto and there were no elves,  and there was papers over the glass in the store windows that was starting to fall down. I was terrified.  I was absolutely certain that he would know I had not been a good girl that year and was going to tell me so in front of everyone!

Christmas's of my childhood were not huge commercial affairs . . . a mockery of all that is good about the holiday season . . . but simple and special . . . with perhaps a giant Christmas tree in the centre of the town, decorated simply and beautifully with multi coloured lights.  Store fronts festooned with sparkling tinsel and garlands . . . and red beribboned evergreen wreaths.  Christmas was kept as a simple, reverent and spiritual time.  There was just enough festive attitude to go around . . . with Jesus being very much the reason for the season, and the Jolly old elf much more in the background.  Our town was more likely to have a village creche or crib . . . than they were a Santa's grotto.  I think that is as it should be . . . but, more often than not these days . . . there is no creche, for fear of insulting someone's sensibilities, or stepping on another faith's toes. 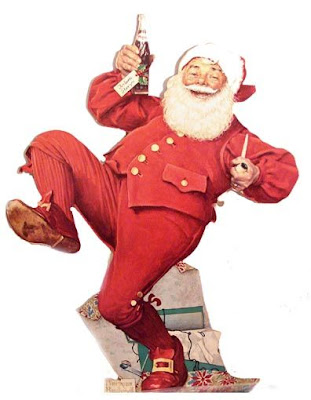 I am not bothered by the sight of a well lit menorah . . . and I seriously doubt that there would be many, with the exception perhaps of the totally irreligious . . . that would be upset with the sight of a Nativity in the town church yard.  I say to each their own. You can't please everyone, and if you try  . . .  well, more often than not, you end up pleasing nobody at all.

I did my tortiere yesterday for Christmas Eve.  I had a bit of filling left and made a small one for Todd to enjoy for his dinner yesterday.  He does love a meat pie. My sister always makes the best ones.  Her pastry is divine. We were talking about Tortiere when I was face-timing my dad the other day. He prefers the Lac St Jean Tortiere which is cubes of a variety of meats, onions and potatoes. Its usually baked in a large roasting tin and bakes slowly all day. You need to keep topping it up all day with stock or water through a hole in the top.  He says what most people call tortiere is actually just a meat pie. 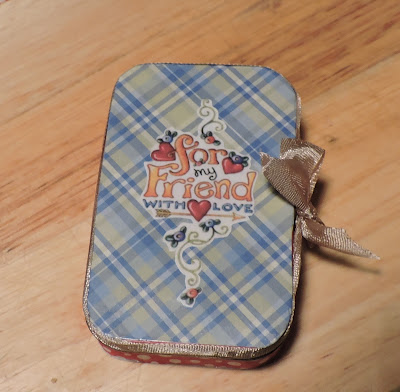 I did a little crafting yesterday as well.  I have a friend who is having a Birthday this week, and I wanted to make her a little birthday box.  I used cut outs from my old ME calendars and some scrapbook papers, and ribbons. 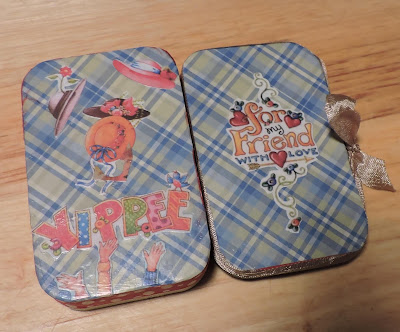 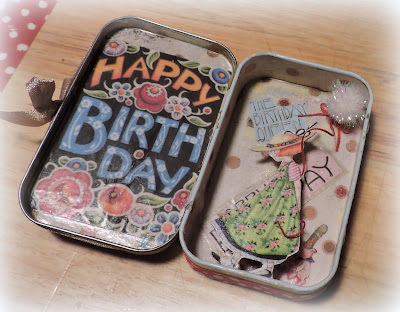 And this is the insides.  Her balloon is a sparkly pompom. 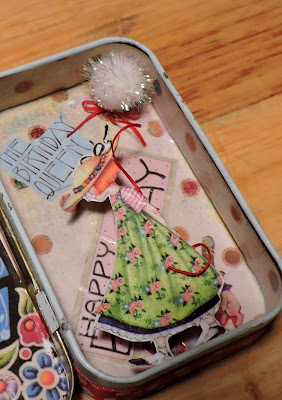 The balloon has an embroidery floss cord. I hope she likes it.  I need to make more time for crafting.  I was right in my element. 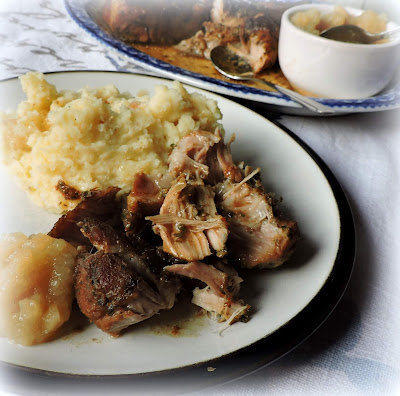 Have a lovely Wednesday!  They are saying we are going into a deep freeze and predictions of a White Christmas in several areas of the UK is possible. It won't be here, most likely, but one can hope!  Don't forget!