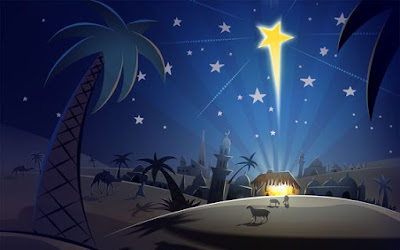 And so it came to pass that early on a mild morning of December, in spite of the dark months behind them, their hearts woke now to the delights of a journey and the new sweet intimacy that enfolded them.  When the sun rose over a sky of pink and gold, Mary laughed with pleasure.

"It is more beautiful than I have words to say," she murmured.  And at night through all the darkness, Joseph kept watch beside his beloved.

The second day was more filled with interest than the first.  They glimpsed the mountains of Gilbon where  King Saul had perished; they saw the rich pastures of Dothan where Joseph had found his brethren so many, many years before.  And at evening the winding road brought them into Samaria.  They rested the night in a little shelter beside Jacob's well on the outskirts of Sychar, eating the food from the knap sack and drinking spring water.

When they entered Judea on the third day their voices held a note of reverence.  It was a hallowed country over which they moved.  At Shillah, Mary caught Joseph's arm.  "This is the place where Hannah prayed to the Lord for a son.  I think I know what she felt.  Sometimes when I think of the child that is to be born, I feel a sword piercing my own heart, also.  It seems to come from the far, far years . . . "

Joseph did not turn to look at her, but it was when they were in the shadow of mishap's lonely height that a sound from Mary made Joseph turn quickly to her.

When she raised her head, even the lips were drained white.  "How far is it yet to Bethlehem?  Can we reach there tonight?"

"By steady going; if we make no stops, we can get there late this evening instead of tomorrow, but Mary, you can go no farther.  In the next town we shall stop and stay until . . . "

But Mary shook her head.  "I must go on," she said softly.  "A few more miles at the end of so many can surely be borne.  Support me with your arm Joseph, and let us not delay."

And so the miles began once more with a man's love and a woman's faith to conquer them. 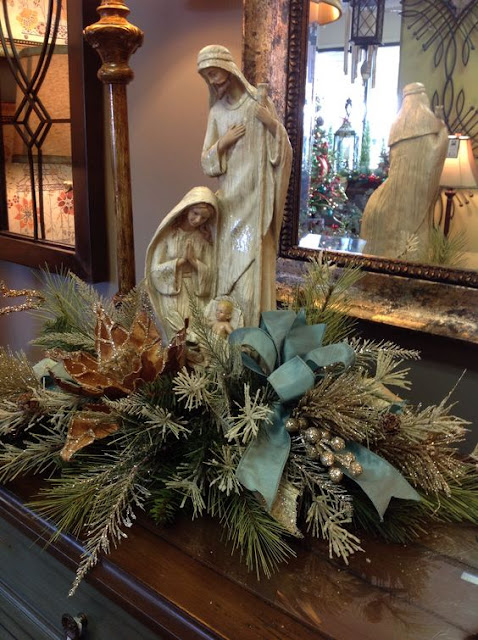 Sometimes through the darkness Joseph heard a stifled moan of pain, then his  clasp tightened.  Ridge after ridge, valley after valley and then at last the hill to which their journey was bringing them.  Bethlehem, with it's sweeping terraces and its hanging vines.  It was at this last steep ascent that Mary again cried out, for the little animal stumbled on the slippery gray limestone and all but fell.

"It is not safe to ride her at times," Joseph spoke anxiously.  "I have often heard so."

Mary suddenly wept with pain and fear.  "What shall I do?  I am so wretched I cannot walk, Joseph."  But Joseph was already placing his knapsack on the back of the ass.  Then he lifted Mary to his arms.

"I shall carry you," he said.  And Mary was too weak to protest.  Her hand crept around his neck.  Slowly, carefully, they moved on and up, the little animal following behind.  Joseph's great muscles strained to the task.  He set his teeth, and prayed, for Mary's life. 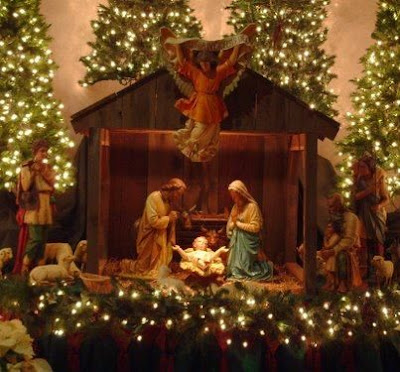 It had been Joseph's innocent, untraveled thought that, of course, the house of his cousin Matthieas, would give them shelter.  It stood only a square from the city gate, the watchman told him.  So with a great relief he made his way there and called.  It was only a few minutes until Matthieas emerged with a light.  He was surprised and delighted to see his kinsmen, but he shook his head sorrowfully over his failure to take him in.

"You don't seem to realize, Joseph, that Bethlehem is full.  You and I are but two out of the thousands that trace their lineage to David.  My house is packed to the farthest corner.  And your wife . . . "

"She must have shelter and privacy.  Her need is desperate."

Matthieas turned the light towards the drooping figure of Mary, again , sitting on the ass.  His face was all pity as he turned to Joseph.  "Come," he said.  "I will go with you and see that you are housed.  At least I know the city."

The Innkeeper, coming out to the courtyard, merely looked at the travelers and waved them brusquely aside.  "No room."  he shouted and turned to re-enter the door.  But Joseph was quicker.  His huge bulk barred the way.  "I must have shelter." he said grimly, "and I must have it here.  I am a peaceful man, but desperate needs require desperate actions.  Where can I take my wife." he said.

Joseph's great hands shook him with quick frenzy.  The innkeeper tried to free himself, sneering up into Joseph's face.  "I know of no place but the stable." he said. 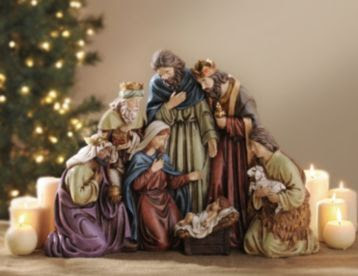 "The stable.  How dare you insult her so!  She must have . . . " another voice broke in,  It was the voice of Mary.  And the gentle tones seemed all at once to still the striving men.

"I think I should like the stable, Joseph.  It will be quiet there.  The oxen will be asleep.  And with a little blanket on the clean sweet hay, we can make a cradle in the manger." And then the innkeeper looked at Mary's face, patient and piteous in her pain, shining white and spent between the waves of golden hair.  He looked and bowed before her.  "It is true as I said, my lady, that there is no room in the inn; but I shall give you all the comfort that I can, and may God be with you."

"He is with me," Mary answered.

And so, laden with the pallet and blankets which the innkeeper brought out to him and carrying one of the lanterns, Joseph led the little ass through the courtyard and on to where the stable awaited them.  As they stopped before it, he felt Mary's hand on his shoulder.  Her voice was full of awe.

"L:isten Joseph, do you not hear it?  There is music ringing through the air.  Angels voices, unearthly sweet, drifting down from the stars."

"Glory, glory, they are singing.  Glory, glory to God in the Highest.  Oh, Joseph, do you not hear it?"

"I hear the voice of an angel," he said gently. 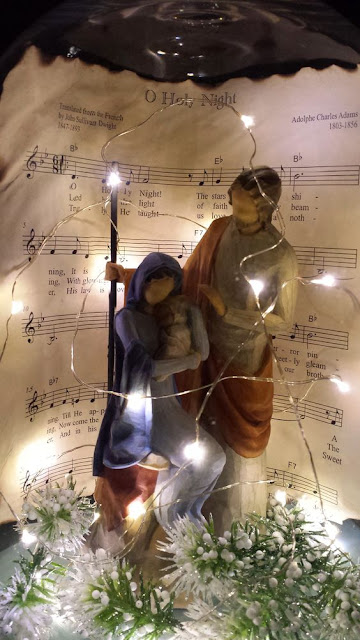 "But look," Mary cried, trembling.  "Look, there to the south, where the sky seems to brood over the hills.  I can see the angels in a path of light.  Winging, swinging . . . Oh, the beauty and the radiance of it"  You do see them, don't you Joseph?  You must see the heavenly wonder of it."

And Mary turned toward him, her hands outstretched.  "Oh, you have heard the music.  You have seen the angels.  Then at last, at last, you will believe all that I have told you.  Tell me you believe."

There was no sound for a long moment.  No sound but their heart-beats in the darkness.  And Joseph found words.

"I believe." he said slowly, his voice breaking with love.  "I believe that what is born of you will be holy." 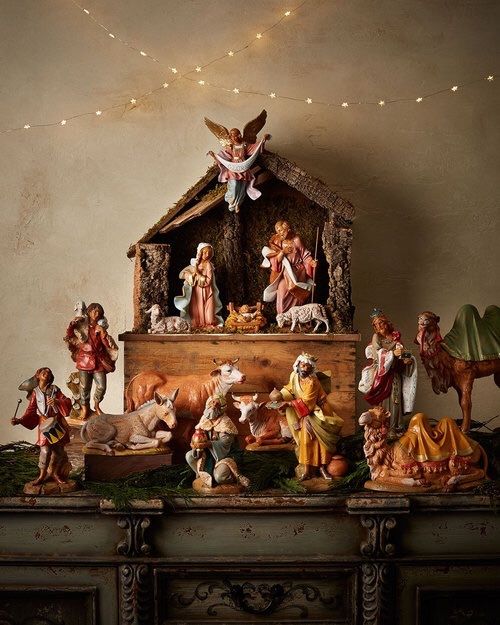 And with that Mary sighed with a great contentment.

"Lift me down, Joseph, and let us hasten to prepare the manger. For now whatever the night may bring . . . my heart is at rest."

And with misty eyes, Joseph carried his wife into the stable.

There was no light within, except the dim lantern.  But high overhead, one great golden star kept watch. 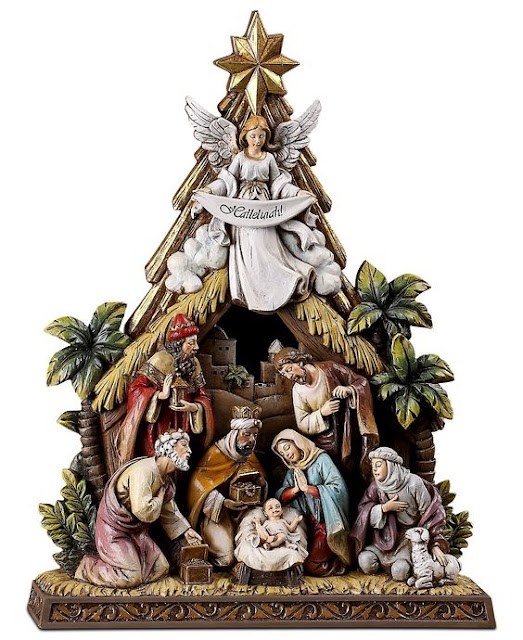 And here we are on the last Sabbath day before Christmas.  Wherever you go, whatever you do on this day, may you feel blessed for doing so.  I hope you find peace and joy.  May you be ever mindful of the reason for the season. 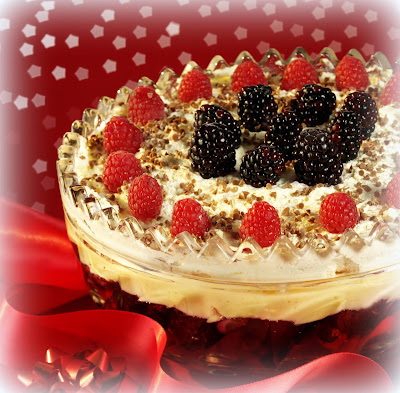 In The English Kitchen today  . . .  A Traditional English Trifle.  So yummy!!

I probably won't be posting anything now until the 27th or so.  I wish for you a very Merry Christmas.  May it be filled with love and family and light!  Don't forget!