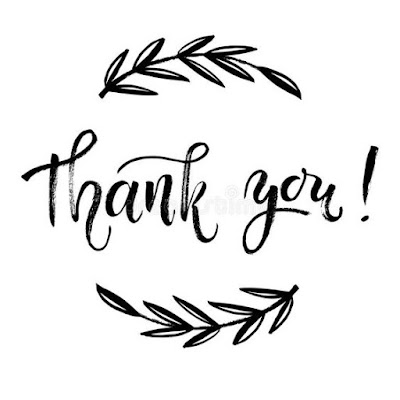 First of all this morning I wanted to thank you all for your kind support yesterday. You helped to turn my day rightside out!  I really appreciated it. But then again, that is what being a part of a Blogging-Family is all about.  Supporting each other when things feel rough.  That is one of the things I noticed very early on in my blogging days.  We are a community of like-minded, caring individuals.  Like attracts like. I am grateful for that! Thank you! 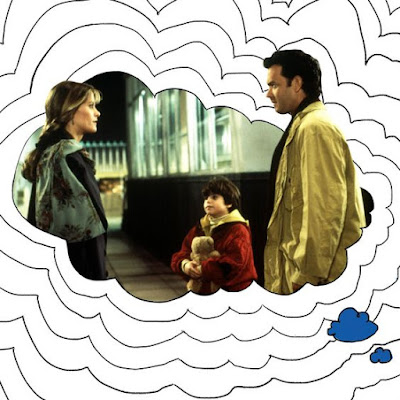 I have had three pretty sleepless nights in a row now, which is not near as cute, romantic or as entertaining as the film Sleepless in Seattle.   The last three nights I have only (what I like to call it) sleep surfed!   This means I have hovered just below being wide awake and just above full on sleep. In a dream state, which abruptly wakes me up about every half an hour, only to look at the clock and notice that it is only half an hour later than the last time I looked at it. I was sure last night I would sleep as I was exhausted, but nope. Sleep eluded me once again. I surfed all night.

I wonder if it has anything to do with my new Blood Pressure Medication which I started taking three days ago? I will have to break down and read the enclosure leaflet.  I try to never read those things because I am a bit of a hypochondriac, and I could very easily end up  with any or all of the side effect listed on the leaflet or terrified to take my meds.  I have always found ignorance is the key to bliss in this area.

Just as I was getting ready to get into bed last night, my eyes spied the last Birthday card my mother sent to me, in 2018. It was sitting right there on top of the bookcase just inside the entrance to our bedroom. I am sure it must have been there for a while, but why hadn't I noticed it before last night? Obviously my mom knew I needed some extra loving and there it was.  It did bring me comfort in what has been a somewhat difficult week.  I know that my sister bought the card for my mom, because mom hadn't been able to go out shopping for things  like this in a while by that time, but I do believe she channeled how she thought my mom felt about me, and I appreciated that.  Mom did sign it, but not in her usual flowery script.  As I read the words once more, my eyes stung with tears, as I remembered just what a caring and amazing woman she was.

That letter I wrote to Becky033 in the kitchen yesterday, that was exactly how my mother would have handled the situation.  Mom had a real heart for the underdog and for righting wrongs. When we lived in Germany, many moons ago now, my grandmother used to send mom clippings from the newspaper from back home.  Someone had written a horrible letter into the paper concerning the Germans and my grandmother was worried about how my mom and I were going to be treated over in that foreign land.  My mother was outraged that someone could be as ignorant as that person in the paper and so she took it upon herself to write a response to the newspaper . . .  in the form of a letter, detailing the love she had for the German people and about how kindly she had been treated since her arrival, etc.

My mother arrived in Germany on Christmas Eve in 1957 with a baby in arms, her luggage having been kept behind.  All she had was the clothes on her back, no change of diapers for me, etc., and with it being Christmas Eve nothing was open. My father had secured lodgings in the form of a set of rooms on the upper floor of a German gasthaus. Of course the family who owned it were downstairs celebrating Christmas in the German way.  The wife of the owner very kindly took my mother under her wing, provided a Christmas dinner for my mom and my dad and a bottle of milk for me, ripped up a sheet to use as diapers for me, etc. all at a time when German's were still recovering from the War. Her many kindnesses had been a Balm in Gilead for my mother who was far, far away from home and family for the first time and who was not a person who dealt well with change.  It meant the world to her.  She had related the story to me many times through the years and mom still had the clipping of the response she had written to the newspaper back home in amongst her memory papers, etc.  I hope my sister has kept it. I would so love to see it again.

Anyways, every time I feel or see a wrong, I always have this need to right it, and in the way my  mother always had.  That is a comforting thought. 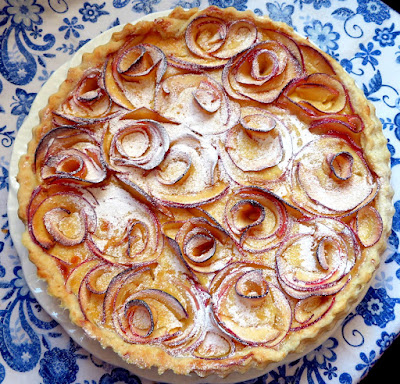 I was making this Apple & Custard Tart for the Chef's Knives site a few days ago and I cut my thumb very badly using my mandolin.  Ouch, it didn't have smart. The show had to go on, so I had to complete my task, or all the work I had already done, and the ingredients prepared thus far would have gone to waste. 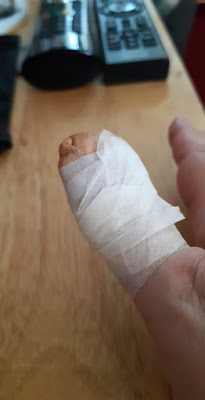 It wasn't easy with a thumb which looked like this.  I got the bleeding stopped and bandaged it up as best as I could!  One of my FB friend suggested that I get myself a pair of cut resistant gloves for the future.  I had no idea that any such thing existed! DUH! 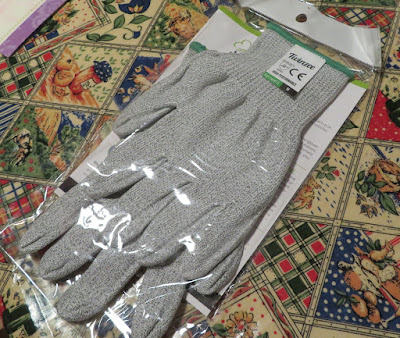 They do and I did!  I had no idea!  They are made of a special material which resists cutting.  I will be wearing them from now on whenever I need to use my mandoline!   Take that you horribly dangerous kitchen tool that I can't live without!  I am now prepared to take you on as I never have before! 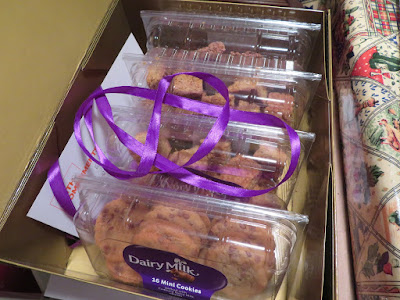 This box of new Cadbury Dairy Milk baked treats arrived yesterday.  There are two kinds of flapjacks, cornflake treats and mini cookies.  I have plans for it.  Whenever stuff like this arrives it is just like Christmas for Todd.  He loves to help me open them.  I often have forgotten myself what is being sent, so I guess it is a bit like Christmas for me also! 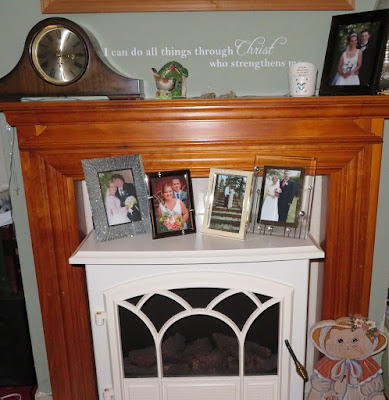 I recently had a clear out and re-organized our mantle here in the lounge and I quite like it. I had a bunch of white cherubs laying all over the top before.  I had liked them at the time, but through the years (we have lived here almost 10 years now, longest I have ever lived anywhere!)  some of them had become damaged, with wings having broken off and being glued back on etc.  I got rid of them and now it is just the mantle clock, a little pottery fairy door my friend Noelle gifted to me, my sparrow, an oil lamp and a small tea light holder which says "as for me and my house, we will serve the Lord" on it and of course my children's wedding photos. Much tidier looking I think.

I wish we could afford a real wood stove, but alas, this is it. Electric, and unbelievably all made of plastic although it looks entirely made of cast iron. Is there anything affordable in the world anymore that isn't made of plastic or in China?  That's a real bee in my bonnet . . . 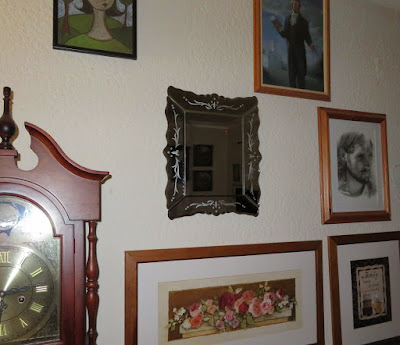 I thought I would show you how my Laura Ashley Mirror looks that I bought second hand on Facebook.  How did I ever think it would work in the bathroom?  I don't know.  I think I was thinking it was much larger than it actually was.  Nevermind, it looks perfect right where it is. 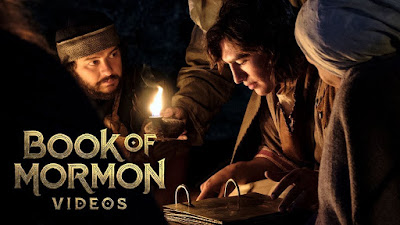 The church has released the first of the new Book of Mormon Videos! So excited about that.  We watched the first one last night on YouTube.  Its a bit less than 19 minutes long.  Its really well done and we are looking forward to seeing the others.

They have done videos of The Bible in the past which were really helpful in Scripture study and so very well done.  I can't tell you how many times we have watched them.  I think it will be the same with these BOM videos.  Authentic to the words of the scriptures they bring them to life in a really amazing and engaging way. 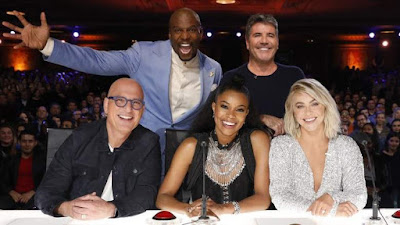 I have to say that this season of AGT was my most favourite season of the show ever.  When it came to the ten finalists I  could not pick a favourite.  All were deserving of a win. All came with amazingly touching stories and all were so very talented.  I think they will all end up with careers of some sort and deserve to. 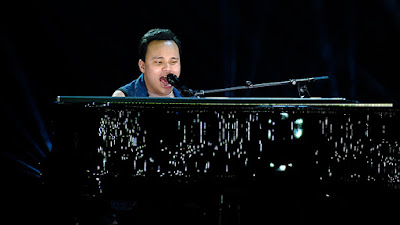 When it came right down to it however, there was no act more deserving of the win and no act more touching than Kodi Lee. So pleased that he won.  This young man captured the hearts of the world.

What I really loved about the whole season was that it encompassed people who, in years past, would have been considered to be outcasts of society and overlooked no matter how talented they might be. This season of AGT gave them a voice and showed the world that everyone has value and deserves to be heard, not just the rich and the beautiful . . . . but EVERYONE!    There are a lot of bad things about modern times, but this is not one of them. 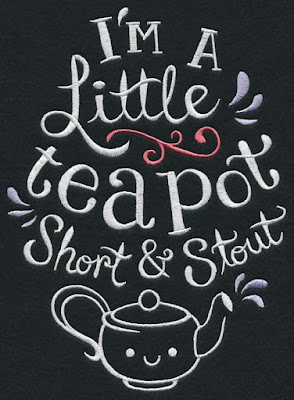 And with that I have run out of steam. 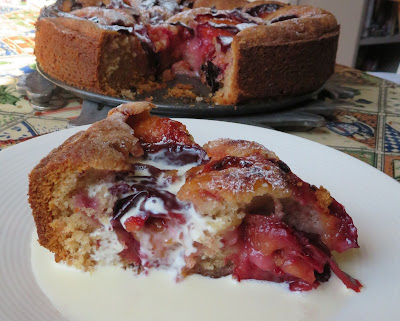 Have a wonderful Saturday.  I am not sure what I will get up to today.  I had high hopes but having had so little sleep I don't know  . . .  Don't forget!