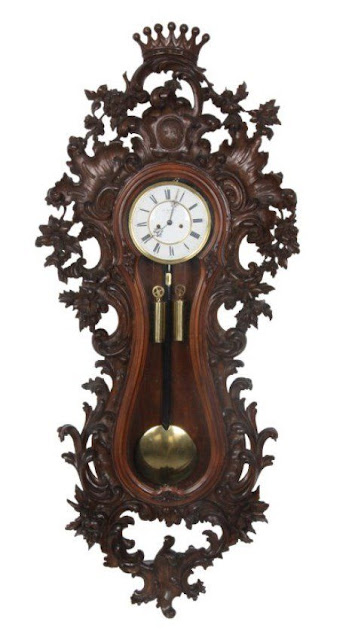 My Gran had an old wooden clock that hung on the wall in the living room of her house . . . just above the wine covered velvet sofa, with it's careworn arms and cushions. I remember it clearly . . . it was all carved and used to ring out the hours as they passed, and throughout the day there was that comforting tick tock that melted into the background so much that you didn't really hear it anymore . . . but would have clearly noticed if it stopped. My Grandfather used to wind it up with a key each day to keep it going. 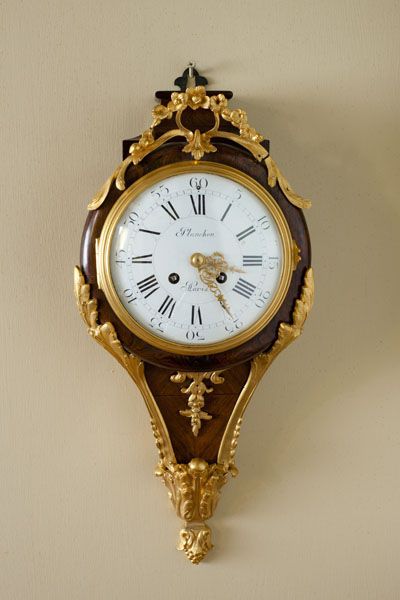 You can learn a lot from a clock. They have a lot to teach us.Oh, for sure they keep us up today with the time of course . . . but they also do much more . . .

A reminder that we, too, must keep moving foward with confidence in what may or may not lie ahead. 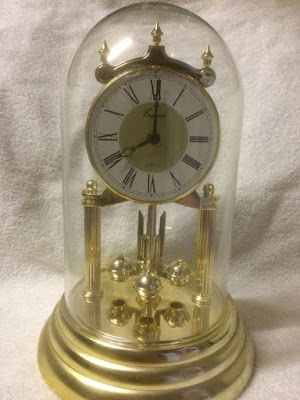 My mother loved clocks also.  When we were growing up we had several.  One was a gold coloured dome clock with a twirling pendulum just like this one . . . 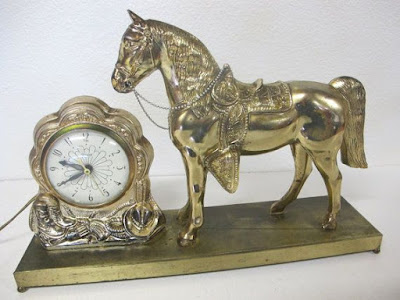 And the other was one very similar to this one with a horse on it. I believe we were all quite fascinated with the horse.  I think we pretty much wore it to death touching it.  We were actually not allowed to touch it, but we did . . . .  plenty . . . . when nobody was looking.  Kind of like my mother's plastic Eifle Tower from Paris.  We touched that plenty also.  But nobody ever saw us.   I guess we were kind of sneaky . . .

For her birthday the summer before I moved over here I bought my mother a clock with carved roses and victorian girls on it, with a teddy bear pendulum.  It was one of those carved resin ones.  I thought it was really pretty and it always took pride of place in her corner cabinet. 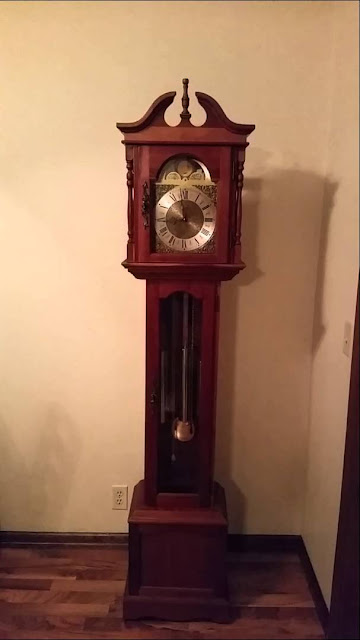 We have several clocks down here in our lounge . . . a Grandmother clock in a tall wooden case that Todd winds up every couple of days, a Westminster wall pendulum clock and a wooden mantle clock. they all tick and they all tock and they all chime. 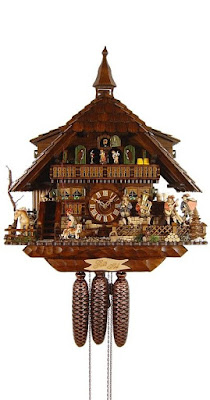 Our other clock is a cuckoo clock which we brought back from the Black Forest on one of our visits. It cuckoos on the hour and little dancers come out and twirl about to a different tune for each hour. The dancers have stopped working and don't come out and twirl about anymore. We've had it a very long time. It is battery operated and if I could do it over again, I would buy one with clock-works . . . that you need to wind up.  I think you may pay more, but it's worth it.  I also have a little German Girl on a swing clock up in my craft room . . . 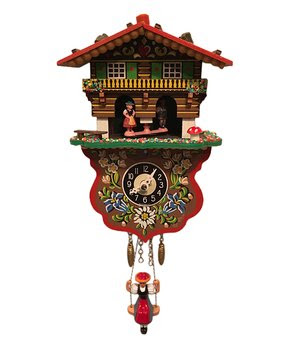 Its a reminder to me of a lovely holiday we were able to take together.  It was supposed to be for Eileen's room.  I used to fantasize about having my children come and live with me in the early days of our marriage, but I never had the money to pursue that course of action and it never happened.  I had their rooms all planned and everything.  Best laid plans and all that . . . nevermind.  Time marches on, and waits for no man, as they say! 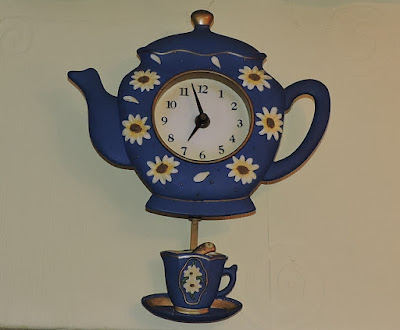 This is my kitchen clock.  Todd bought it for me in our early days of wedded bliss.  The teacup doesn't swing anymore, but I cannot bear to get rid of it.  I love it because I love him, and it would not be my kitchen without it.  It has lived in every kitchen we have had together.

We also have lots of alarm clocks . . .  in our bedroom we have three, two small travel alarm ones, and a larger digital one with glow in the dark lights so that no matter what time I wake up I in the night I can see clearly what time it is.

We've been working to get our passports sorted this past week.  Todd lost his somewhere last autumn.  He remembers taking it into the bank for some reason, but he hasn't been able to find it since.  So we had to send for a new one.  His is all done and sent off.  My Canadian passport expired the beginning of December.  I didn't feel a sense of urgency in having it renewed because I have a British one, but then this week when we went to renew it, we discovered that as a Canadian I am not allowed to re-enter Canada on my British passport.  It has to be my Canadian one.  Apparently a law that changed in 2016.  I could, if I had dual American Citizenship, enter with an American one, but not a British one, even though I have dual British Citizenship.  Odd that, especially where Canada is part of the British commonwealth.  In any case we are just about ready to send my papers off to have it renewed.  Do you know how much it costs over here to get my ten year Canadian Passport?  $260!  plus postage of $12.  Its outrageous as I know it would not cost that much if I lived in Canada.  Plus I have to have my photograph taken at a special photographers, which costs as well.  Todd was just able to go to the passport photo machine in Morrisons and have his done for £10.  Canada does not make anything easy for you if you live outside the country.  Its annoying. 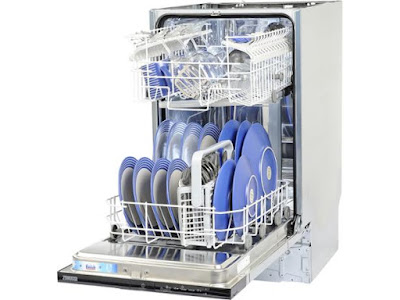 My dishwasher died this week.  An engineer won't be able to come out and have a look at it until next Thursday.  And then I suppose I will have to wait for parts to be ordered, etc.  We do pay for appliance insurance on the dishwasher, stove and washing machine, so everything is covered if it breaks down or if it needs to be replaced, thank goodness.  I am so spoiled now having had the dish washer these past few years, I would not want to be without one now.  It gets the dishes so much cleaner.  I know . . .  I did not have one for many, many years.  I can go a few weeks without one now. 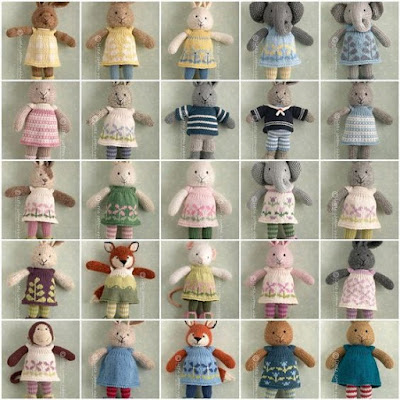 I sent off for some yarn this week so I can knit a few more of those little cotton rabbits.  My fingers are itching for something to do in the evenings, and I thought I might make a few to sell. We shall see.

We are off out to get a few groceries this morning, dishwashing soap being one.  I only have a little bit left.  I have TONS of dishwasher machine soap however, lol. In any case I will leave you with a thought for today . . . 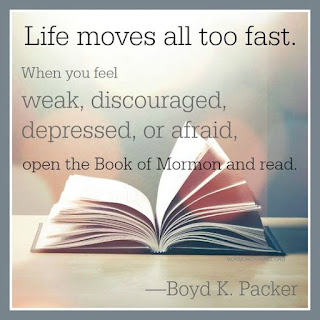 BOOK OF MORMON CORNER - Today's Reading-Jacob 7:1-20
Question - What have you learnt from the reading today? How can you avoid being deceived as Sherem was?
My thoughts - I can't be casual with the scriptures and words of prophets. They protect me from evil and from being deceived. I really know this is true and I strive to HOLD FAST to them continually. I love that we have the technology that enables me to access all the words of God so easily and wherever I am. This is a massive help to me every single day.

Also the Holy Ghost will protect us against being deceived, but for this to happen we must always do the things necessary to retain the spirit. Jacob teaches us not to 'quench the spirit'. I really thought about this. How things throughout my day, things like my reactions, my conversations, the thoughts and feelings I entertain and let grow, my level of gratitude, what I watch or listen to, how I spend my time  . . .  all have the potential to quench the spirit or enhance the spirit in my life. Disobedience and neglect both quench the spirit. But when I am living worthy of His companionship, the Holy Ghost will bless me in ALL His roles. One being that He teaches and testifies of TRUTH.

Tommorrow's Reading (Monday, Day 87) - Jacob 7:21-Enos 1:10
Question - What changes came as a result of Jacob's prayer? What similarities can you see between Enos and his uncle Nephi? 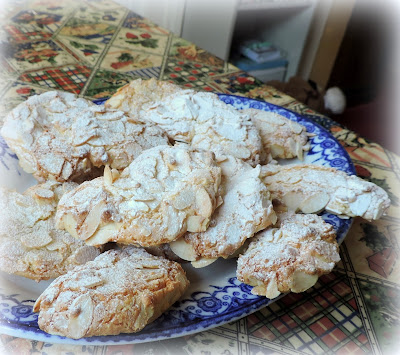 Baking in The English Kitchen today . . .  Almond Horns.  Not sure how authentic these are, but they are pretty darned tasty, gluten free also.

Have a lovely Saturday.  Hope its a good one for you.  Don't forget along the length and width of your day . . .