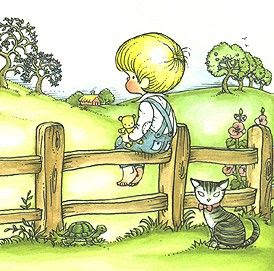 A little boy sat at the breakfast table one morning, playing with his spoon in the cereal.  He was thinking about something.   His brow was all scrunched up as he thought . . .

"What is love?" he asked his mother.   His mother looked at him with surprise on her face and then she thought for a few minutes, and her brow was all scrunched up.  Finally she replied.  "Love is caring about another person so very much that you want to do your very best for them in every way, like I do for you.  Because I love you so very much, I never want you to be cold or hungry, or sad, or lonely.   I want you to be happy always, but when you are sad . . . because everybody gets sad sometimes, I want to be there to put a smile back on your face and a song into your heart."

The little boy smiled and gave his mother a hug, and then he went out to play.

He ran and frolicked all the morning through and got very, very tired from all of his play, by and by . . .  and so he sat down on a tree stump at the edge of the forest to rest. While he was sitting there, he noticed a bird flying back and forth from up in a tree.    It would fly away for a short time and then it would be back.   He wondered what it was doing.   Each time it left, it would come back with some scrap in it's mouth . . . a twig or a small piece of fluff . . . string, straw . . . nothing that looked very important, but always something . . . he wondered about it, but then he went off to play some more.

The next day he was out walking along the edge of the woods and playing,  and once again, he looked up into the tree.  He saw that the bird was still doing the same thing, only this time it had help.  There were now two birds flying back and forth . . . away and to the tree . . . each time carrying in their tiny beaks a twig, or a small piece of fluff . . . string, straw . . . nothing that looked very important, but always something . . . he wondered about it again . . . but then he went on his way. 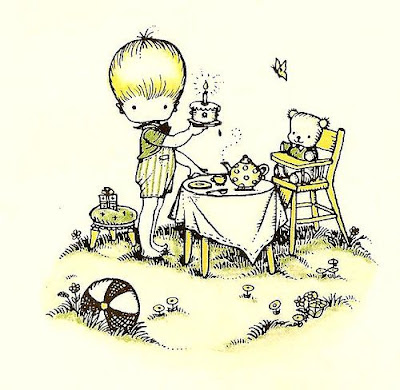 The next day he went back to see if they were still playing that funny game of flying back and forth to the tree.  He noticed that they were not.   Instead in the tree where they had been flying to . . .  a nest had  magically grown.  It was small and it was round and flat . . . and it was built of twigs, pieces of fluff . . . string and straw . . . nothing very important . . . but one of the birds was happily sitting in it, while the other bird flew back and forth,  and back and forth . . . bringing the bird in the nest little bits to eat . . . small berries and insects, and other things which birds enjoy eating.   The bird in the nest was singing and looking very content, whilst the other bird tiredly flew back and forth, and back and forth . . .  but sometimes the flying bird would stop and it would sit on the branch and sing to the bird in the nest . . . and the little boy wondered at it . . . and smiled. 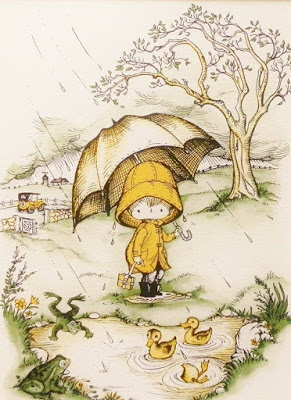 This happened every day for quite a few days.   The little boy would go back each day to see what the birds were doing, and always it was the same thing.   One bird would be sitting in the nest and the other bird would be flying back and forth with tasty tidbits for the bird in the nest to eat.    Isn't it marvelous he thought . . .

Then one day it all changed.   He went to watch the nest,  and there was no bird sitting in it.   It looked empty.  Oh my, he wondered, what could have happened . . . he sat there pondering it for a few minutes, when all of a sudden he saw one of the birds fly back to the nest and perch on the edge of it.  All of a sudden the nest was filled with a cacophony of  sound as little heads and gaping beaks popped up out of the nest . . . it was filled with baby birds, and they were very hungry.  The larger bird bent it's tiny head down and fed the baby birds with what it had brought.  Soon it was joined by the other bird and they were both feeding the baby birds with berries and insects and other things that birds like to eat. 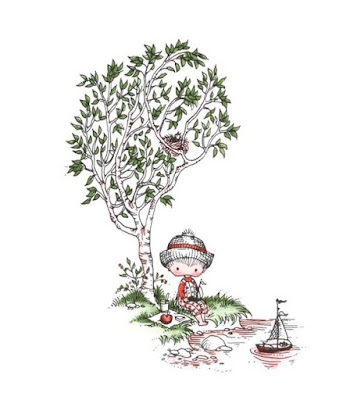 And then he heard them . . . and all along the branches of the tree,  one by one . . .  a bird landed . . . flying from here and flying from there,  until they were all in a line together . . . and he knew then what had happened.   The baby birds had all grown up, and they had learned to fly . . . and they had left the warm safe nest that had been built for them, but they still came back, and once in a while,  they would crouch down and flutter their wings and flap . . . and the older birds would give them tidbits to eat that birds like to eat . . . and they were happy. 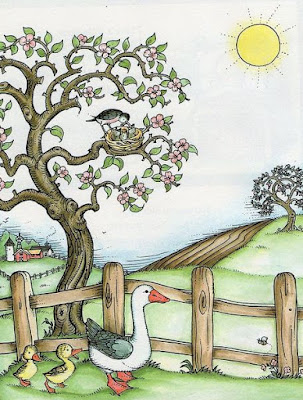 and that made the little boy happy.  He remembered what his mother had told him on that morning which seemed a long, LONG time ago, but really wasn't.   He remembered what love was . . . and he looked at the birds and he thought to himself . . . I know what love is . . . and so do they . . . and he smiled, and went back home.   His mother was busy working in the kitchen, but he went up to her and he gave her a big hug . . .  a squishy hug . . .  a squashy hug . . . a hug so hard that he couldn't hug her any harder, and he looked up at her and smiled and she smiled down at him . . . and it was good.

All illustrations by Joan Walsh Anglund 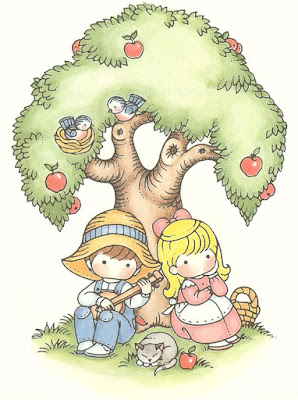 The funeral went okay yesterday. The family had gotten a lovely floral arrangement for their mum/nan. It didn't last very long, only about half an hour or so.  It was nice to be able to mark Doreen's life and pay tribute to her in a special way.I was happy to see that Billy who had so lovingly cared for her over the past 20 years was treated just like family.  That is how Doreen would have wanted it, and as it should have been. 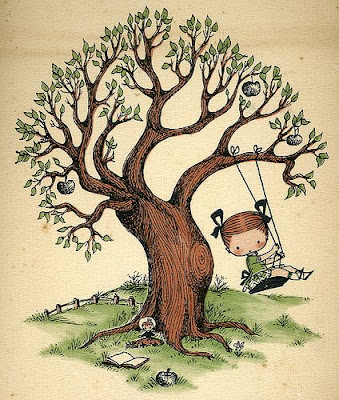 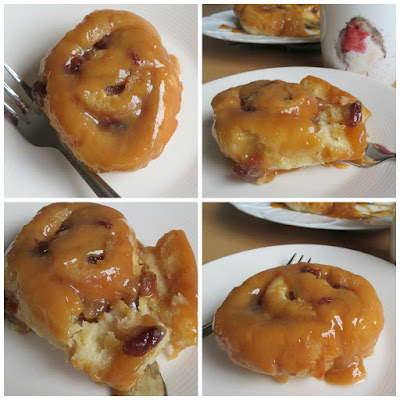 In The English Kitchen today  . . .  Butter Rum & Raisin Hot Rolls.  A treat for Todd.  The recipe makes only four but I have also included measures to make 8.

Hope your Saturday is filled with plenty of love.  Don't forget this.