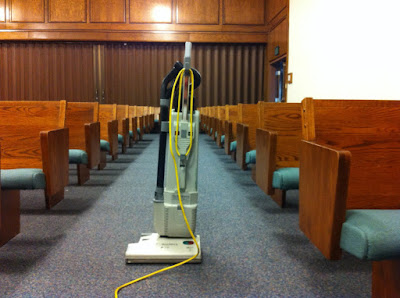 This week was our week to help clean our chapel (all the members take turns) and so late yesterday morning we dutifully drove off to do just that.  I don't mind cleaning the chapel.  We are to lucky to have this lovely building to worship God in and being able to take my turn keeping it lovely and clean suits me just fine. The older Missionary Couple were there with us, doing their cleaning job also.  Well, he was, poor Sister Boyer had gone to bed with a migraine so We helped him out with his job also as it was a lot harder than ours, and there were two of us!

They are such nice people, the Boyer's.  I really admire these Missionary Couples that are able to leave their homes and serve a mission.  I know Todd and I also served a Mission, but we didn't have to leave our home and family behind to do so. Its relatively easy to serve if you are doing it from your own home. Its a bit more of a challenge to do it from an unfamiliar place, but they are doing it admirably.  We are loving getting to know them and helping them out whenever we can. 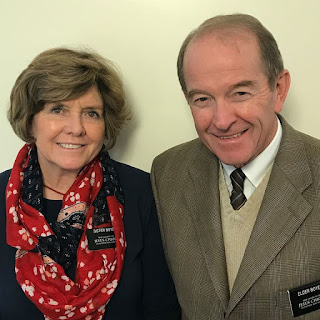 Anyways, they wanted to take us out for dinner last night.  I didn't want them to go to all that trouble, but they insisted and we said yes.  We went to a pub not too far from where we live that sells every meal on the menu, two for one.  Three of us had the same thing, Chicken with garlic mushrooms that came with baby new potatoes and salad.  Todd had Chicken and Mushroom Pie and Mash.

As soon as my plate was in front of me I noticed white fur growing on the cut side of one of the pieces of tomato in the salad on my plate. I knew what this meant.  That salad was old.  Its common practice in many restaurants to just scoop out anything nasty looking from their big bowl of salad each day and add fresh to the top.   I know this because I have done it in every restaurant I have ever worked in. Not saying it is right, just saying it is common practice.  I have never liked doing it. NEVER  But it was what is done, if you catch my drift.  Don't buck the system or you don't have a job.

You cannot imagine how hard it was for me to eat my meal after that.  I didn't want to say anything to anyone because I didn't want to spoil what was an otherwise lovely evening, and they were so kind to take us out.  The chicken and garlic mushrooms was very good, but I was wondering the whole time, how old was the chicken . . . how about the potatoes.  I know chips are fairly safe to order because there is a large turnover in chips, they are a popular item . . .  but baby new potatoes? I ate them, and tried not to think about it. 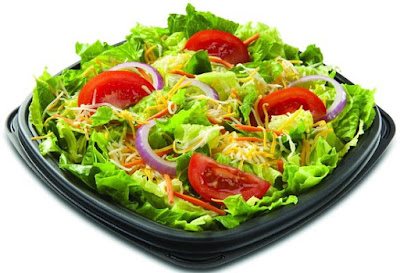 I didn't touch the salad, which I am sure people were wondering about.  Especially as I had ordered some salad dressing. Can you believe salad doesn't come with dressing?  I know . . . especially when they have the cheek to bring you old salad. It should at least come with dressing.  The waitress, when I asked was there any dressing said, oh we only have a vinaigrette.  I thought to myself, and yet you offer salad on the menu. I would have been so happy to get a salad that looked like the above salad, but sadly, that has never happened.  They had a steak and blue cheese salad on the menu that I had almost ordered.  I was so grateful that I hadn't.

I think it is so wrong that restaurants recycle their salads from one day to the next.  There is no excuse for it.  I am unsure what to do about it.  Do I leave a nasty review on their webpage?  Do I report it?  I know I should have complained right then and there, but the waiter was so nice and the company was so nice and I didn't want to spoil an otherwise lovely evening. 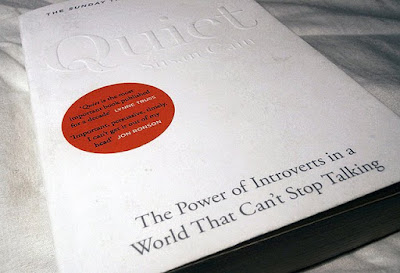 I started reading this the other day, and I can't put it down.  Quiet by Susan Cain.  I am hoping this is the book Monique told me she was reading.  In any case, I started to read it on Amazon with the preview ap, and was hooked so ended up buying it.

At least one-third of the people we know are introverts. They are the ones who prefer listening to speaking; who innovate and create but dislike self-promotion; who favor working on their own over working in teams. It is to introverts—Rosa Parks, Chopin, Dr. Seuss, Steve Wozniak—that we owe many of the great contributions to society.

In Quiet, Susan Cain argues that we dramatically undervalue introverts and shows how much we lose in doing so. She charts the rise of the Extrovert Ideal throughout the twentieth century and explores how deeply it has come to permeate our culture. She also introduces us to successful introverts—from a witty, high-octane public speaker who recharges in solitude after his talks, to a record-breaking salesman who quietly taps into the power of questions. Passionately argued, superbly researched, and filled with indelible stories of real people, Quiet has the power to permanently change how we see introverts and, equally important, how they see themselves.

I am learning so much about myself.  I have always been a bit shy, but I would never have thought I was an introvert.  Very early on in the book there is a list of statements/qualities of introverts. She asks the reader to go through the list and mentally tick the ones that apply to yourself. Out of all of them, there was only one that I was a bit dubious as to whether it applied to me or not.


I am definitely an Introvert.  Now what to do about it.
If anything. 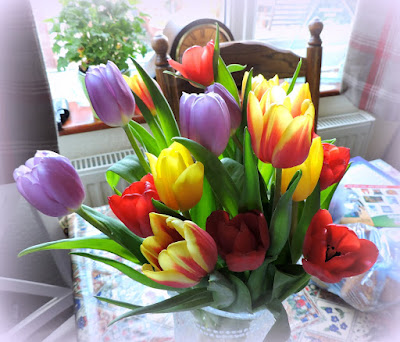 A week later and my tulips are still going strong.  I love them. Tulips are not a flower I would have ever thought of buying, but I am glad that someone did think of buying them for me because I have really been enjoying them. That tip to push a pin into them just below the bloom to help keep them fresh longer really works. 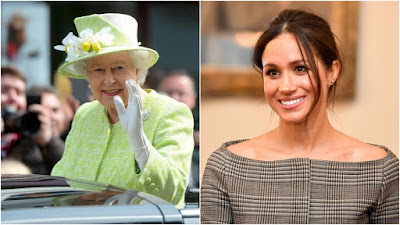 So, The Queen and the Duchess of Sussex are coming to Chester this week coming up, on the 14th, to officially open the Story House (which is the new library/theatre/cultural centre here in Chester.) This will be the Duchess's first official engagement since the wedding. After that they will be walking to the town hall to have lunch as guests of the Cheshire West and Chester Council.  I do hope that the salad is fresh and not recycled.

There is a part of me that would love to go into town and see if I could see them, but there is another part of me that hates crowds and would just rather wait and see the pics in the papers.  What would you do?   I rather think that it will be very difficult for anyone wishing to see them in person.  They are really beefing up security for the day, and have already posted notices in town to let people know that there will be road closures.  And I just read this:

"A temporary traffic regulation posted on the council website says the order is to prohibit all traffic – including, in some cases, pedestrians – from certain streets because of the likelihood of danger to the public arising from the Chester civic event in Chester city centre on Thursday, June 14, 2018."

So I really expect that there would be no point in trying to go in and see her. them. 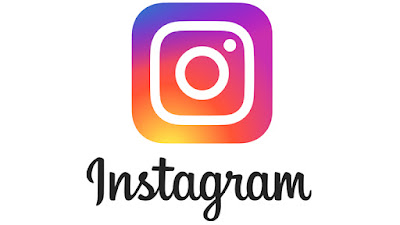 I am quite enjoying the Instagram and the community of lovely people I am getting to know there.  I am not one to pay much attention to numbers really.  I have never liked popularity contests, but I was chuffed yesterday to get notice that my youngest daughter had followed me on Instagram.  Small things make me happy. I would rather be a person who is pleased with small and simple things, than to be chasing pots of gold.

I have always been a people watcher . . .  and Instagram is a great place for people who love to watch other people and see what they get up to. 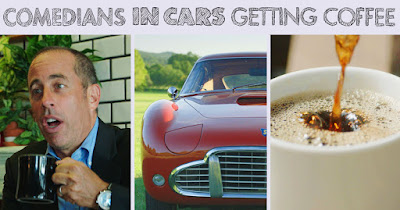 I started watching this little show on Netflix this week.  Comedians in Cars Getting Coffee.  I have always liked Seinfeld and I like this quirky little show so far.

"Comic Jerry Seinfeld is the creator, executive producer and host of this unique series that features vintage cars, funny conversations and a lot of caffeine. Jerry picks up each guest in a special car -- including the likes of a 1977 Volkswagen camper bus, a 1978 AMC Gremlin, a 1964 Studebaker Avanti, and a 1970 Ford Mustang -- and heads to a cafe or restaurant. While the guests are typically comics, one episode features a drive around the White House grounds with President Barack Obama in a 1963 Chevy Corvette Stingray." 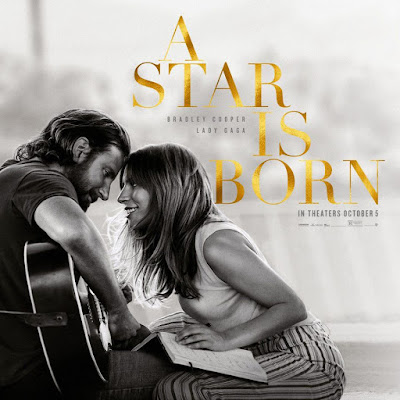 Is it just me?  Doesn't this look like it is going to be a great film, starring Bradley Cooper and Lady Gaga?   I have never seen any version of this, but was awfully tempted to watch the Streisand/Kristopherson version a month or so back.

The preview/trailer for this looks very good, but in all truth I am waiting on tenterhooks for the Susan Branch film, where they put her life up on the golden screen. #SBBooktoScreen  Some how I know without a doubt that I will not be able to resist that. Not in a million years.  I have admired her work since I was a very young woman, back in the early 1980's, when she used to have a recipe in the Country Living Magazine every month. I know its not a done deal yet, but really, if someone doesn't do this they are missing out on a real gem. A real treasure. 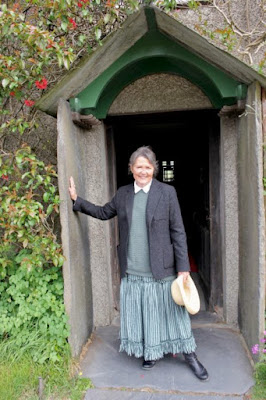 She is one of us, an incredibly lucky, pinches herself every day,
kindred spirit, one of us. 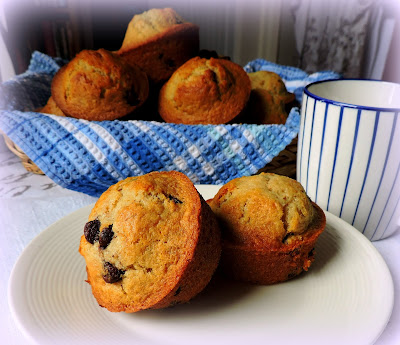 Have a beautiful Saturday.  Its overcast at the moment, but we have had a wonderful run of very beautiful weather this whole week!  We are loving it!  Don't forget along the length and width of your wonderful day  . . .

Email ThisBlogThis!Share to TwitterShare to FacebookShare to Pinterest
Labels: #SBBooktoScreen