As most of you know, yesterday was the first day of our semi-annual Church Conference.  As usual all of the talks we have listened to thus far have been amazing, but the one given by Elder Neal L Anderson had me thinking about it all night, even in  my dreams.   He spoke of the Spiritually Defining Experiences in our lives and admonished us to embrace our Sacred memories, believe them, write them down, and then to share them.  I thought that this morning I would do just that.  Sacred memories and experiences are those moments in time when our Heavenly Father reaches out to us in unmistakable ways and lets us know that He knows us, loves us and is there for us . . .  here are some of mine. 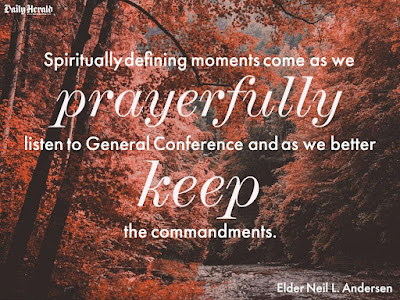 Back in 1999, we had gotten our first computer.  I wasn't able to be on it for much time each day as back then you paid to be online by the minute, but I did find a chatroom that was an LDS chatroom. Included was a Gospel Doctrine room and I spend some time in it each day, challenging the people I found in the room with questions, etc.  I was actually a bit evangelically argumentative in a way I find embarassing to think about now.  These people did not know who I was, or where I was from, but they were always very patient with me and answered my questions in ways that made utter and complete sense to me. After one particularly heated debate I remember getting off the computer and thinking to myself that if Joseph Smith could pray and get answers, then so could I, so I said a little prayer . . . "Heavenly Father, if this Gospel is true, then send me a Book of Mormon." I then got busy with my day and kind of forgot about it.

The next day my father was at my home for lunch, and as we were sitting in the kitchen eating and talking, there was a knock on my back door.  This was mid January in Nova Scotia, back when they had really snowy and cold Januaries. Our home was not in a town or a subdivision but on a secondary highway.  I opened the door and there on my doorstep were two shivering Missionaries from the Church of Jesus Christ of Latter Day Saints.  MY first question to them was, did you bring me a Book of Mormon?  They were blown away at my reception to say the least.  They had been on their way to a meeting and the spirit had told them to stop at my house.  My prayer had been answered in a clear, concise and very defining way.  God had given me my answer succinctly and without qustion, and further more . . .  I knew it, and I knew He knew I knew it.  I was baptised on the 8th of July that year and have never looked back. 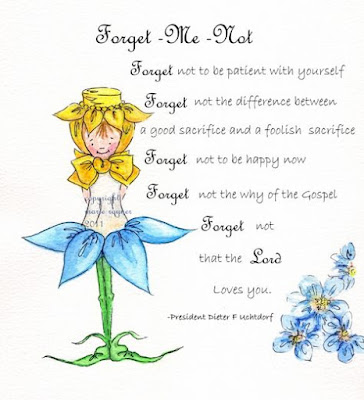 At the General Conference in October of 2011.  The Elder Dieter F Uchtdorf gave a talk entitled Forget Me Not.  I have always loved his talks, but this one was so amazing it was like he was talking just to me.  I was that person who had so often in my life felt forgotten, as a child, as an adult, etc.  His talk had really resonated with me and I did this little piece of art about it afterwards.  Todd said to me, you should send a copy to President Uchtdorf.  At first I poo-poohed the idea, but then I thought why not.  So we went and got a frame, packed it up and sent it to Salt Lake City with a letter of thanks for his talk.  It was shortly after that when the Doctors thought I might have ovarian cancer. Ovarian Cancer is a killer.  I completely forgot about the talk and the artwork.  My life was overtaken with tests, and waiting for results, and . . .  yes . . .  I admit it . . .  fear.  One day on a Friday morning in mid-November I heard the mail drop through our mail box onto the front hall floor.  I went to pick it up. There on the mat were two letters.  One was from the hospital and the other was from the Office of the Presidency of the Church of Jesus Christ of Latter Day Saints.  There is no question as to which one I opened first. 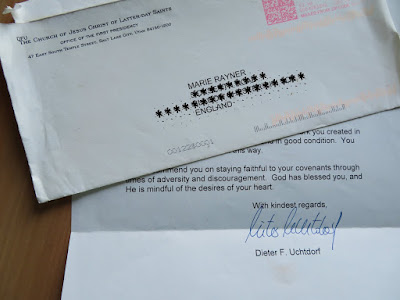 Right. The one from the church, or to be exact . . .  President Uchtdorf.  I knew in that moment, when I read his words, that everything would be alright.  It would be several weeks before I would know for sure, but that day, in the front hall of my house, I knew it was all okay, no matter what happened.  I felt the peace that passeth understanding.  Later that day I was re-reading the letter in bed with tears in my eyes, and I said to Todd, an Apostle of the Lord has told me that my Heavenly Father has blessed me and that He is mindful of the desires of my heart.  This is something that I thought I knew anyways, but this letter was  a solid confirmation and a poke from my Heavenly Father which said, Hey!  I got this! I love you! Not yet your time!  And even if it was my time, I knew I was definitely not alone.

But it wasn't even so much the fact that it wasn't yet my time that mattered most, it was that my Heavenly Father knew and loved me so much that He set up the timing of all of this to come at exactly the right time for me. From the get-go  . . . you can't imagine how much comfort I have gotten from that letter through the years since then.  With the difficulties I have with certain members of my family, through Todd's cancer treatments, etc.  this letter has served to remind me always that my Heavenly Father is mindful of the desires of my heart.  It has helped me to be patient and to wait on His timing and His answers in all things. 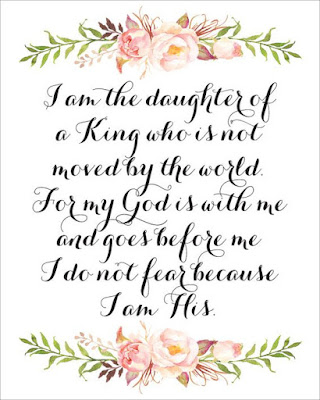 Another time I was feeling particularly blue on a Sunday morning, probably Mother's Day or some such, with very tender feelings about the way certain members of my family see me and how they treat me, and I just wanted to go home.  So we decided to leave right after Sacrament meeting.  Half way across the parking lot I spied a piece of paper on the pavement.  It was a small paper heart and when I picked it up, printed on it in ink were three words. "You are loved."  I knew who it came from.

And these are just three of my spiritually defining experiences.  There are so very many more. These might be the most striking of them, but I can honestly say that every single day of my life I am  reminded in small and simple ways that my Heavenly Father is mindful of me and knows me by name. That I am not alone in anything.  That He cares about even the smallest, most mundane desires of my heart.  That anything that matters to me matters to Him, and beyond that.  Most importantly that I MATTER TO HIM. 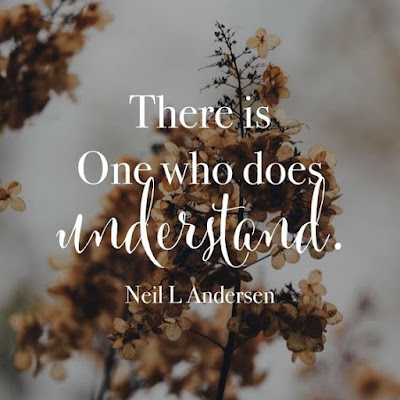 That is not to say that all of the answers to my prayers are in the affirmative, or that I even get answers right away, but my Heavenly Father has shown me in indisputable ways that I do matter to him, always have, always will.  I am not too small, or too invisible . . .  never not good enough.  That He will always meet me right where I am and if the trial will not be moved, that He is willing to hold my hand while I go through it.

He is just as real to me as I am to Him.

Sometimes my faith affirming moments have been as simple as kneeling in prayer to ask for help in finding Todd's lost hearing aid (he is always losing them) and reaching out right afterwards, before I even get up,  and being able to put my hand on missing item.  A simple thing yes, but surely faith affirming.

Not all faith defining moments come in grand gestures, but I have had enough of them to know that they come, no matter what, in one way or another.

I just had one this morning  . . .  As I was going through my journal to get the letter from Elder Uchtdorf to share with you  a small slip of paper fell out and on it was written something from one of my sons-in-law which simply said, "Just wanted you to know that we are thinking of you today. thanks for all the love and effort you put into your kids.  Thanks for thinking of us all here. It is tough being so far away.  Great job on being persistant in your love."  Just lately I have felt like giving up on a few people for a varity of reasons.  Your heart can only get broken so many times before you feel like enough is enough. Finding this slip of paper this morning reminded me that I must never give up, no matter how much it hurts.

Faith affirming moments.  We all have them, whether we choose to recognise them or not.  Faith in the right things is never misplaced. 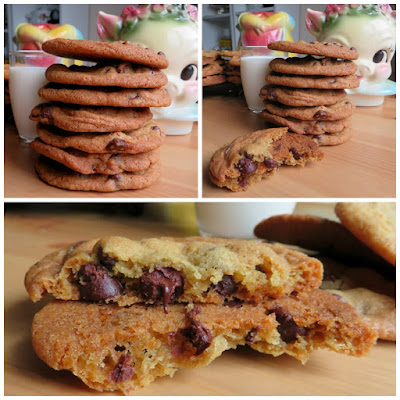 I baked some cookies for my neighbor and her son yesterday as a thankyou for all of her help recently. In the English Kitchen today.   World's Best Chocolate Chip Cookies. Fabulous!  She about died when she got them. Seriously tasty.

Have a great Sunday whatever you get up to.  We will be watching more of the Conference and I will be trying to get ahold of my daughter.  I haven't been able to for several days now.  Two days ago the phone was busy every time I called and yesterday there was no answer. Trusting that all is well.  Don't forget!