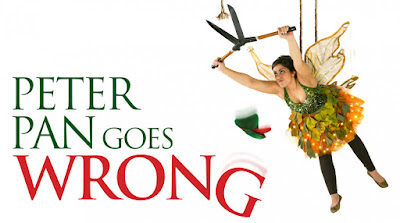 We got up to something that doesn't happen very often in our house yesterday. Last Christmas our friends Carolyn and Eric gave us theatre tickets to see a play at the Story House in Chester, and yesterday was the day that the play was showing and our tickets were good for.  The play was called Peter Pan goes Wrong and it was fabulous! 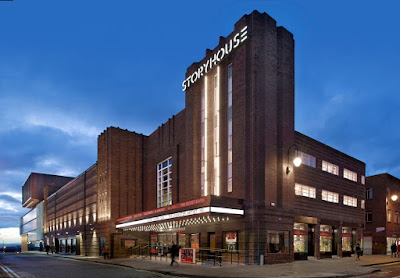 Storyhouse is a large, mixed-use cultural building in Chester, England, which opened in May 2017.  The complex includes a theatre, cinema, restaurant and the city library. It is housed in the remodelled 1936 Odeon Cinema, a grade-II-listed building, together with a newly built extension to hold the theatre auditorium. It replaced our old library, cinema, theatre, etc.  Its really quite a fabulous building. It doesn't look like much during the day, but it looks amazing at night. We were at the matinee performance, but it was getting dark by the time the play finished and we were on our way out.  You'll have to excuse some of my photos as they were taken with my phone. 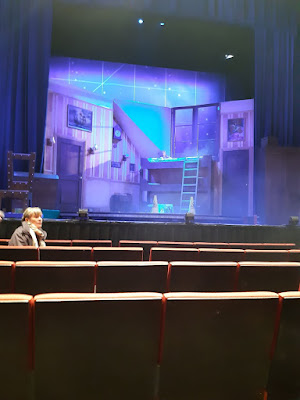 This is a photo I took of the set when we first went in.  We had brilliant seats in the stalls, only about five rows back and there was smoke swirling around very eerily.  We were there about half an hour before the play started so it looks quite empty, but I can assure you by the time the play was ready to go the theatre was jam packed. There wasn't an empty seat left in the house. 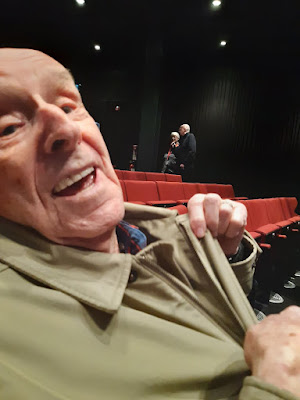 The premise of the play was that it was, well  . . .  a production of the Play Peter Pan that was going horribly wrong. People were forgetting lines, things were blowing up. Props were falling over, but it was all done in such a way that it was hysterically funny.  Yes, it was a comedy.  Very camp and very entertaining. 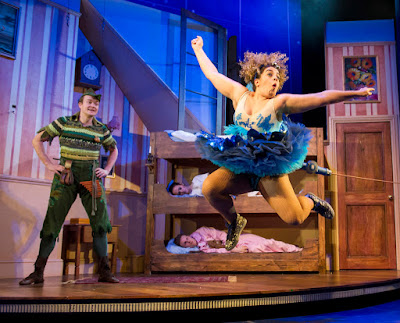 The actress that played Tinkerbell played about six different characters. She was always having to change her clothes. It was really quite funny. She was brilliant in each roll. 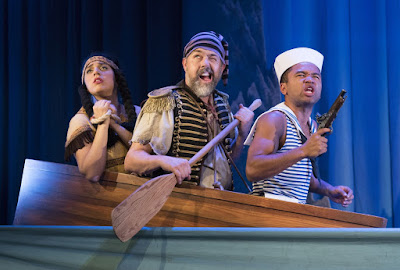 Here she is as Tiger Lily.  She also played Mrs Darling and the maid and I don't know what else.  The man in the middle also played the Director,  I mean co-director, Nana the dog, a pirate and Peter's shadow.  He was absolutely brilliant also!  The fellow you see here on the end was the youngest darling boy as well as a pirate and his thing was he could never remember his lines and so he would come up with the wrong lines at the wrong times, etc. but in a very humorous way. 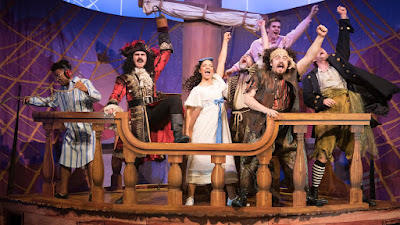 The stage craft was wonderful.  All of the sets were really well done.  You had the children's bedroom, the forest, inside the house of the Lost Boys, the mermaid lagoon, etc.  All were amazing and bright and colourful. 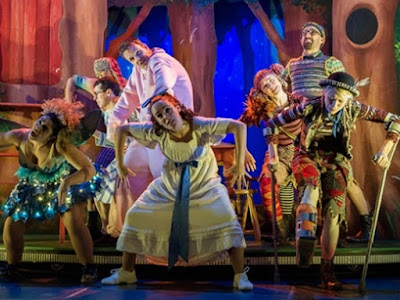 There was plenty of audiance participation as well.  Very  British Panto-ish.  It was great fun!  We both enjoyed it very much and thought that it had been just the best Christmas Present ever!

It was getting dark when we got out and very close to tea time so we decided to make a real date of it all and take ourselves out for a quick bite to eat. 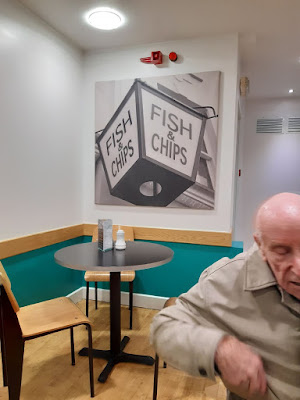 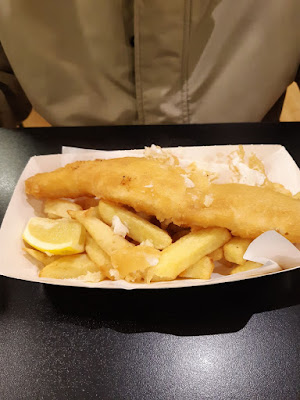 We each had a small Cod and Chips.  I wish that I had thought to take a photo before we actually started to get stuck in so you could see what it looked like untouched! 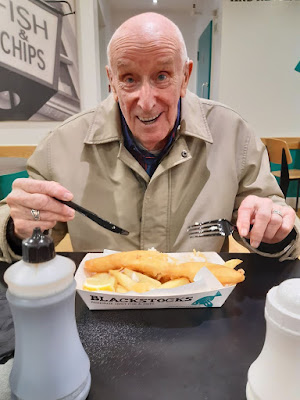 This was the small, as I said.  You can see it is really quite large!  Oh that batter is so crisp and the fish so fresh and tender. 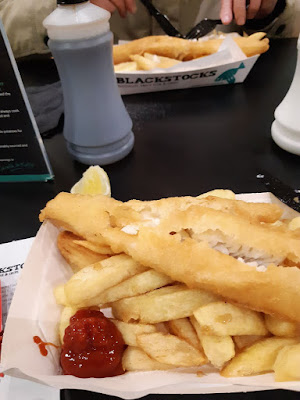 I am such a North American and of course I like ketchup with my chips, as well as salt and malt vinegar.  I always cut down the centre of the fish to squeeze my lemon in.  Oh but it was some good.

If you were to ask anyone in my family when going out to eat in a restaurant what they wanted to order,  99% of the time the answer would be fish and chips.  The other 1% would only be  when fish and chips were not on the menu as in a "Pizzaria" or "Sub Shop," "Chinese," etc.  We are all so very predictable!

We were back here and home (via the bus) by 5:30 pm.  Someone was supposed to be coming to pick up our china cabinet.  We had put it on a FB free for the asking site yesterday morning and it got snapped up right away. 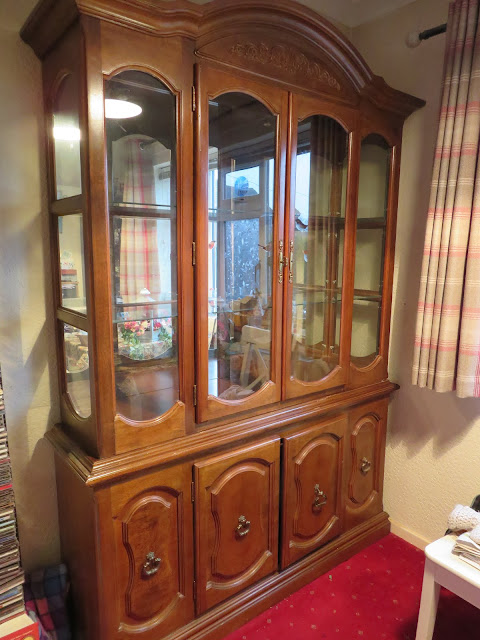 Actually Tina's grandson, Jayden who is a world-class motor cross racer from South Africa and his partner were going to have it for their new house, but it ended up they didn't have enough room on the truck as he was given a new racer and that, of course, had priority.  In the meantime we had it all emptied out and ready to go and so we put it on Facebook to give away.

Everything that was in it (which was rather quite a lot as you can imagine) is sitting in piles all over the place.  We have a new bench/storage seat ordered and arriving today so we really need to get rid. 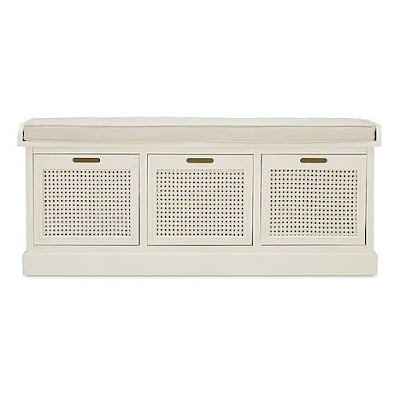 This is the one we ordered.  It was on sale and will make for some extra seating at our table.  At least that is the plan.  I am hoping it will look breakfast nook-like. We shall see.  First we have to get the cabinet out.  I said to Todd if the worst comes to the worst we will just have to break it up and take it to the tip.

The lady who wanted it was supposed to pick it up after 5 last night, but she never showed up.  Apparently she will be coming after 5 tonight.  Fingers crossed she does.  I would like to get my house back to normal.

Its my nephew's funeral today.  I wish I could be there to help my sister get through it.  We are not sure when Doreen's funeral will be.  These things take a lot longer to happen over here in the UK.  We haven't been able to get in touch with Billy since it happened. His phone keeps going to voice mail. I think Todd is going to have to go over to his place to see how he is. I would invite him for a meal, but with the house in such an uproar I am not cooking much.

And that was our day yesterday.   Our new bench could arrive anytime now so I best get off here.  I am not sure where I am going to put it.  I expect it will sit in the middle of the lounge until they come to cart the old cabinet out of here, and with that I will leave you with a thought for the day  . . . 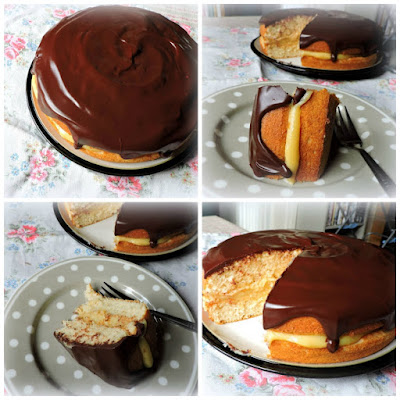 I have nothing new to show you in the kitchen today, but thought you might enjoy re-visiting this Boston Cream Pie I baked a few years back.  It was yummilicious!

Have a wonderful Thursday no matter what you get up to.  Don't forget!