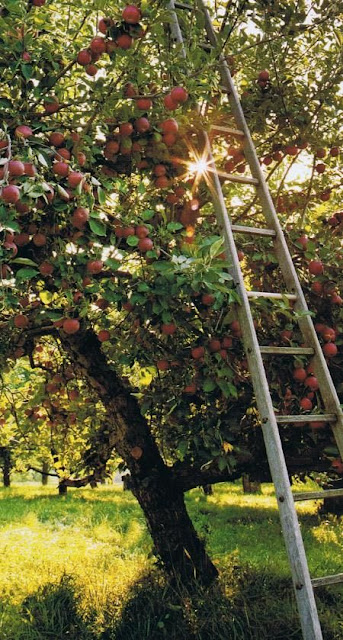 We sit now in September . . . summer is beginning to wane. How did that happen? We did not notice the days passing . . . and now they are spent. April's promise has come true, against skies of blue, thickly fruited boughs are spread with russet, greens, reds and golds . . . and orchard air hums with the sound of fruit pickers, their laughter and song carrying out across field and furrow . . .

Tis the quiet time for the birds. Down in the woods, where shadows lie darkly under the heavy foliage of late summer . . . the hedgerows lay silent. Where now is the whitethroat . . . the blackcap . . . the warbler??

The lark, too . . . holds his peace. The skies seem lonely without his song. 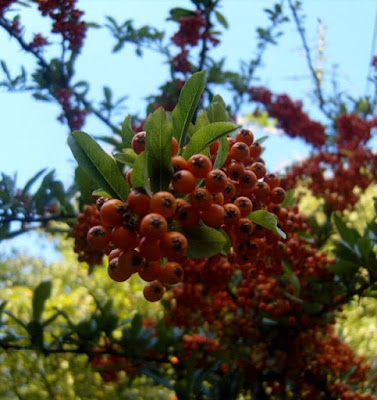 Old plum trees hang with fruit . . . cracked plums alive with the hum and buzz of greedy wasps as they cluster thickly over their surface, drinking in all that they can hold . . . nectar sweet.

Apples turn ruby cheeked faces to the sun, whilst pears hang down . . . ripe and juicy on over-burdened branches.

The fields are ready, corn waits patiently for the threshers to come, cut and stacked it lays . . . soon to be not much more than stubble waiting for the heavy cut of the plough. 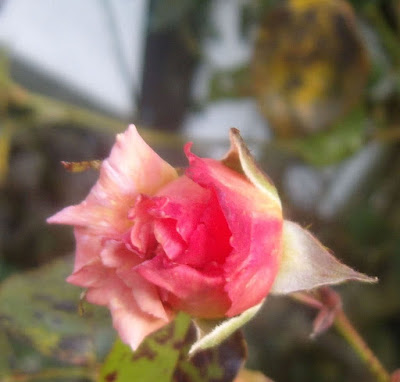 The light is somehow different now . . . whilst in the garden roses bud for the second time, their blooms the last hurrah of summer, as petals wilt and wither beneath the waning sun, leaving behind scarlet globes . . . hips, ripe and flushed . . . ready for prodding and greedy beaks. All too soon, the feasting will be done.

Purple jewels hang upon thorny branches . . . ripe for the picking . . . waiting to be made into cobblers and pies . . . jams and jellies. 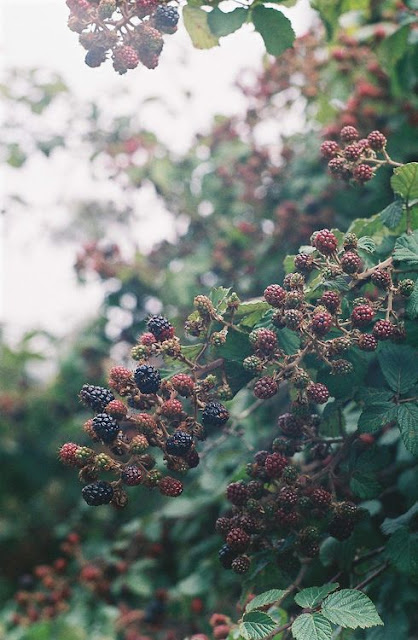 Tis that time of year . . . the hour of maturity . . . the season of fruit and fulfillment, of gathering and garnering . . . 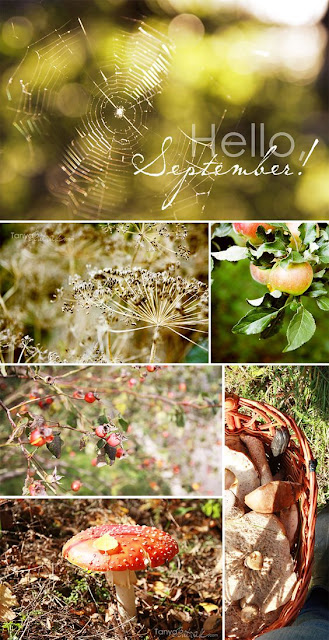 I think autumn is one of my favourite seasons of the year. I love the smells, the sounds . . . that crisp feeling in the air, the sight of turning leaves.  I love being able to cook heartier fare . . . soups, stews, casseroles . . . apple pies . . .

When my children were growing up the kitchen smelled like vinegar and spices as I pickled and preserved the last of the summer's bounty. I was right in my element.  I felt like Mother-Earth. It was a lovely place to be.  Miss those days . . . 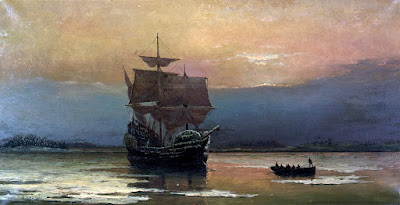 The Mayflower in Plymouth Harbour
by William Hallsall

I love doing Geneology and researching Family History. I always have done. It is something which my Aunt Freda and I had in common. It was always said that some in our family had come over to America on the Mayflower.  Yesterday I made the connection.  John Tilley (of Hemlow, Bedfordshire), his wife Joan (Hurst) Tilley and their daughter Elizabeth (13).  John and Joan both perished that first winter in the New World, but their orphaned daughter Elizabeth went on to marry fellow passenger John Howland, and together they had ten children and 88 grandchildren, with millions of descendants living today.

Here are some of their noteable direct descendants:

Amongst many others, including me.  There are literally millions of us.  I got goosebumps. I now have a really good reason to celebrate Thanksgiving in November! 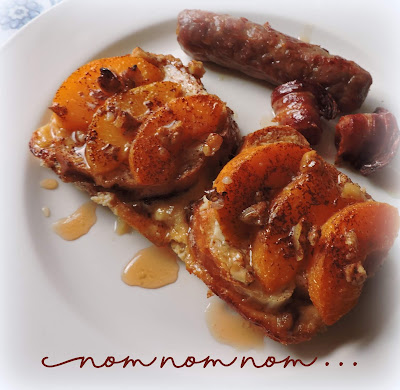 In the kitchen today  . . .  Baked Peach French Toast.  I served it with sausages and bacon curls.  It was delicious!

Have a wonderful Sunday. No matter what you get up to, don't forget!