Source: cafleurebon.com via Patrick on Pinterest
I will arise and go now,
and go to Innisfree,
And a smallcabin build there,
of clay and wattles made:
Nine bean-rows will I have there,
A hive for the honey-bee,
And live alone in the bee-loud glade.

Source: bjsmith4-anniesplace.blogspot.com via Betty on Pinterest
And I shall have some peace there,
for peace comes dropping slow,
Dropping from the veils of the morning
to where the cricket sings;
There midnight's all a-glimmer, and noon, a purple glow,
And evening full of the linnet's wings.

Source: lettergoesting.wordpress.com via Brittany on Pinterest
I will arise and go now,
for always night and day
I hear lake water lapping with
low sounds by the shore;
While I stand on the roadway,
or on the pavements grey,
I hear it in the deep heart's core.
~W.B Yeats

William Butler Yeats was an Irish poet and one of the foremost figures of 20th century literature.  He was the driving force behind the Irish Literary Revival and  the first Irish poets to receive a Nobel Prize in Literature.  He was born in (1864) and educated in Dublin,  but spent his childhood in County Sligo.  He studied poetry in his youth and from an early age was fascinated by both  Irish legends and the Occult, them having greatly influenced his writings until the turn of the century.   After 1900, his poetry grew more physical and realistic, as he largely rescinded the transcendental beliefs of his youth, though he remained preoccupied with physical and spiritual masks, as well as with cyclical theories of life.  He never married and died in 1939 at the age of 73.

I love to do these Poetry Saturdays, probably because I love poetry.   I often think in rhyme and prose . . . I know, crazy me!   I have discovered a lot of new poets doing this weekly post and learned a lot about each.   I think we are meant to keep learning as we  go on in life.   I hope that I never stop learning and discovering new things.

This is my little granddaughter Maryn who will be turning two later this month.   I am looking forward to hopefully seeing her when I am at my mom's.  She is growing like a weed.  Of course I think she is the most beautiful granddaughter ever . . .

I think that is a grandmother's prerogative!   In any case, I will bring  her Birthday stuff I have for her over to her and hopefully I will be able to give it to her.

This is a photo I took of the blue sky and sunshine outside our front door the other day.  Quite pleased with how it turned out and . . . I did another paper doll yesterday, hoping to do some clothes for her today.   Will give you a glimpse of that tomorrow!

Yesterday's Silver Lining . . . a lovely conversation with my sister and father on the chatline.  Oh we did laugh and have a good time.  I do so love my family.  Had an extra bonus of talking with my father again early this morning.

“The simpleness, the sweetness, and the constancy of the tender mercies of the Lord will do much to fortify and protect us in the troubled times in which we do now and will yet live.”
~David A Bednar 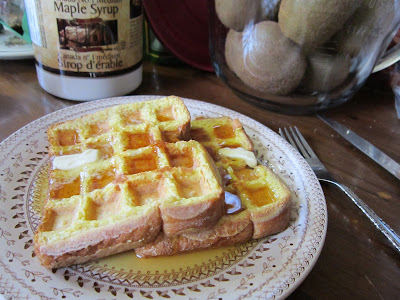 Oh, and I just have to show you this.  It's my sister's french toast, on her blog, Flat Belly Files . . . made in a waffle iron.  Looks delish!  AND there's no fat involved!