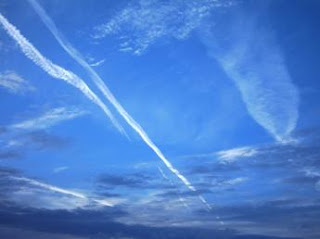 I was standing at the kitchen sink washing dishes yesterday morning, and as I was washing away, I was looking out the window. I often do. I could not work happily in a kitchen that did not have at least one window, or even two, to gaze out of as I went about my chores.

Often as I peer out at the lovely view, lost in my thoughts, I see jet streams in the sky, left behind by aircraft as they fly overhead. I always think about the people that might be on those planes and wonder about where they might be flying to, and I sometimes even make up stories in my head about who they are and what their lives are like, and about what adventure they may be beginning. I know how I feel when I go to fly anywhere, and how exciting it is to be taking a journey, whether far away or near by. Vapour trails often decorate the sky where we live and at any given time we are able to look up at the sky and see at least two of three, maybe even more, sometimes trailing behind the actual planes . . . but more often than not, just the tell tail white streak in the sky that lets me know they have been there, the residue simply being the evidence left behind which tells me they've been there . . .

We are all a bit like planes in that respect. Everything we do in life leaves a trail behind it. The good things . . . the bad things . . . the special things . . . the ordinary things . . . We wander through life doing this and doing that, most of the time not really giving much thought to what we are leaving behind in our wake . . . every action producing a consequence, and leaving it behind, however big or small . . .

I like to think that most of the time I leave good things behind from the seeds I scatter here and there, but at the same time I recognize that I am not perfect . . . and that I do leave behind something that I wish I hadn't from time to time . . . but that is the journey we are all here to follow. Our quest, our life's purpose . . . to become "Better Me's." And . . . it truly is a journey, just like those planes that I watch flying overhead. It has a beginning and it will have an end. I just hope that the vapour trail I leave behind is a good one . . .

Ohh, I got the nicest package in the mail yesterday, all the way from Australia! I was so excited!!! It's always just like Christmas when you get a package from abroad, and it's not something you ordered or were expecting. There was a knock on the back doorway to Oak Cottage yesterday morning, just as I was leaving for work, and there stood the postman with our day's mail, including this lovely package, all done up in a pretty purple box with stars printed all over it. How exciting!

I ended up being a little late for work as I just had to stop and see what treasure it held inside. Several months back I was visiting a page that I often do here on the web, A Glass House, which is a blog written by a lovely lady named Maddy. On this particular day, she had written about how she was searching for a long lost relative. I commented, as I usually do, and in my comment I suggested that she try Genes Reunited. We had been looking for Todd's son for a number of years and it was through Genes Reunited that we had finally been able to find him. Maddy took my advice and lo and behold . . . if she didn't end up finding the very person she had been looking for and was able to contact them!!! She was quite thrilled and had wanted to send me a little thank you for having pointed her in the right direction. I did not expect to receive anything in return when I had done that simple kindness. I was only just sharing some knowledge that I had, but this box held a very special thank you for me from a new friend. Inside was a lovely card and the most beautiful china mug and coaster, painted with the most beautiful botanical print of a Red Flowering Gum Tree. Many thanks Maddy from the bottom of my heart. This was the perfect thank you gift from the perfect friend! You really made my day!

This week there was a tie in my Make Me Bake section. The Buttermilk Pie with Raspberry Sauce tied with the Warm Honey Gingerbread! What to do . . . what to do??? I decided to let Todd choose, as he is going to be the one who has to eat whatever it is, and he chose the Warm Honey Gingerbread, so look for that on here real soon! In the meantime, I'm putting up a new Make Me Bake Poll.

Tune in later today to see who's won the cookery book as I'll be drawing it later on. I'm quite excited about that. I wonder who it will be. I could even be YOU!

I'd like to share a recipe with you this morning for a delicious dinner that is quick to put together, perfect for making the night before and always happily accepted by anyone I've ever made them for.

These are wonderfully rich and light and so very easy to make. I got the recipe from out of a magazine in the Doctor's waiting office one day (I couldn't begin to tell you which one) and I brought it home and adapted it to our tastes. They have become a firm favourite in my repertoire. Just perfect for when you want a light supper or lunch. You can also make these up to a certain point the day ahead and then just pop them into the oven about 15 or 20 minutes before you eat, so they are a great make ahead for those busy days when you just know you aren't going to have a lot of time to prepare anything!!

Place the milk in a small pan along with the onion, clove and bay leaf. Bring slowly just to the boil, then remove it from the heat and leave it to infuse for 30 minutes.

Pre-heat the oven to 200*C/400*F. Take another pan and place it over medium heat. Melt the butter in this, then stir in the flour. Cook, stirring until smooth and completely amalgamated, for about one minute. Remove from the heat. Add the milk in a slow and steady stream, whisking the whole time. Return to the heat and cook, stirring, until thickened and just beginning to boil. Remove from the heat.

Stir in 4 ounces (125g) of the grated cheese and all of the grainy mustard. Season well with salt and pepper and a good grating of fresh nutmeg. Whisk in the egg yolks, one at a time.

Beat the egg whites until stiff with an electric whisk. Stir about a third of the egg whites into the cheese mixture to help slacken it and then gently fold in the rest. Spoon and divide the mixture evenly into the buttered ramekins. Carefully add boiling water to the roasting tin to come halfway up the sides of the ramekins and then carefully place the roasting tin into the heated oven. (If you have strong oven racks it is probably best to place the roasting tin into the oven first and then add the water) Bake for 15 to 20 minutes, until they are well risen and nicely browned on top.**

Remove from the oven and remove from the roasting tin, placing them on a wire rack to cool. Increase the oven temperature to 220*C/425*F. Once they are cooled enough to handle, carefully tip them out onto the palm of your hand, one at a time, and place them, right sides down, into a buttered baking dish large enough to hold all six of them. Season the double cream with some salt and black pepper and spoon it evenly over top of each souffle. Sprinkle the remaining grated cheddar cheese evenly over top. Place back in the oven and bake for about 15 minutes, or until they are well risen and the cream is bubbling and the cheese is melted and beginning to brown nicely. Serve hot.

**You can complete the recipe to the end of the first baking and put them in a buttered dish, cover them, and then store them in the refrigerator for up to a day ahead before proceeding. Bring them to room temperature before finishing them off as outlined in the recipe.