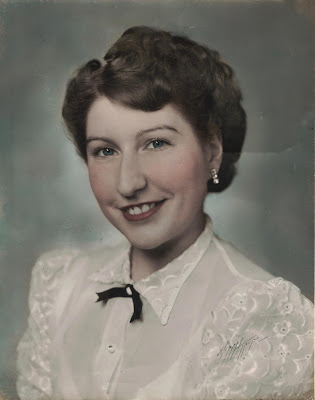 I'm like my mother, I can see
Her every action here in me,
The way she punched the bread,
The things she wore and what she said,
The way she slanted up her eyes,
Crimping the edges of the pies.

I catch myself unconsciously
Doing the things I used to see
Her doing all around the place,
The very crinkles in her face,
The lace edges aprons that she wore,
The way she bargained at the store.

I see myself in printed blue
Puttering just like she used to do,
Setting the table neat as wax,
Getting out father's bedtime snacks,
Sitting down heavy in a chair,
Panting a bit upon the stair.

And like my mother, I have known
The toil and burdens, walked alone
Life's rugged road, the hopes and fears,
That mother carried all the years,
Facing a world that takes its toll
Of all the strength of heart and soul.

I only pray, though years be long
I'll hold her laughter and her song.
~Edna Jacques

This poem really made me think about my mom. Not so much the words, because my mother was very different than Edna's mother in some ways, but very alike her in others  . . .  but mostly I liked this poem because I do see my mother in me in a great many ways.  Oh, no  . . .  I have never been, nor will I ever be as physically beautiful as my mother was, but I hear myself sounding like her often, and I find myself doing things exactly as she used to do them. I have probably always done so, but I am now more cognisant of the fact.  I cling to these small things and ways because in doing so, I am able to recognise that my mother is still with me and always will be.  I was talking on the telephone to my father the other day and he said that he wished he could dream about my mother, and I felt blessed that I could and that I do.  Each dream is a gift to me. May they never stop visiting me. 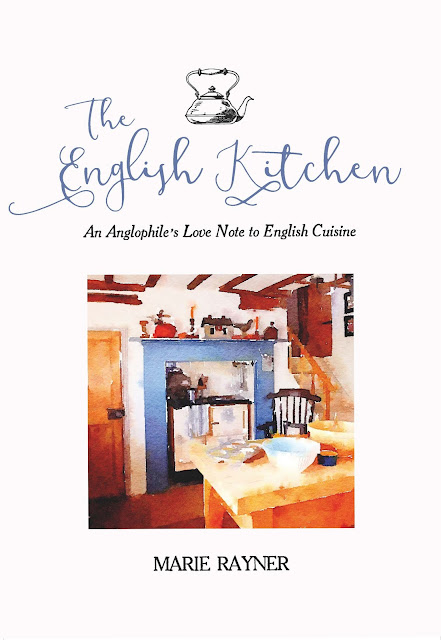 I had to remind the accountant one more time, but I did finally get the residuals owing to me yesterday. In the two years since my book was published I had only ever gotten three payments. One shortly after it was published which was the advance, which should have been paid me prior to publication, and then two other smaller amounts which were royalties due me.  Supposedly I was to be paid royalties every quarter, which would have meant 6 payments, on top of the advance in that two year period.  It never happened.  The other day when she e-mailed me it was such a paltry figure and none of the figures in her statement were adding up.  I knew I had never gotten what they said I had.  So I took a few hours going back through our bank statements, over two and some years checking. It was pain-staking work, but I found the three transactions and only three that they had payed me on.  They owed me four times what they said they did.  I was able to prove this to them, and eventually, yesterday, they coughed it up.  Not sure if I will ever get any more, or if my second book will ever be published, but at least I got this.  The squeaky wheel does get the grease. The old me would have just taken what they told me as fact, the new me took the time to really investigate and then speak out about it. I am grateful that I did.  I now have some money that I can use when my daughter Eileen and my son Anthony come over. Yippee! I may self-publish the second one after all, on my own, on Amazon. What do you think? 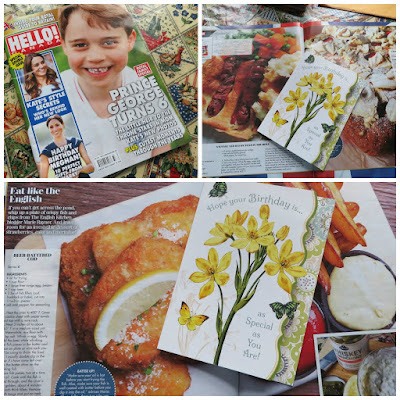 As you know I was recently published in Hello! Canada magazine.  I had a pdf copy of the article/spread, but that is all, and I was pretty grateful for that.  Being showcased in Hello! is something I guess I can be proud of.  I got a package yesterday from my dear friend Noelle who lives in Dartmouth back home. She is a lot younger than myself, and I can't even remember how we met.  We have actually never met in person, only on line, but we message each other frequently and have this special friendship.  I have the kind of relationship with her that I wish I had with my own youngest daughter.  Noelle lost her mom when she was only 23 and I haven't had a real relationship with my youngest daughter for a long time now, which breaks my heart, but it is what it is.  I am not sure Noelle knows what a blessing she is in my life.  Heavenly Father seems to use her in just the right way to touch my heart and fill it. I got a lovely letter from her several months after my mom passed away and it meant the world to me. My own daughter has never even acknowledged to me my mother's passing.  And then this, for my Birthday, along with another beautiful letter.  My own daughter never wished me a Happy Mother's Day or a Happy Birthday or zip this year.  I am sure she has her reasons and to her they are valid so I will not make light of them.  I have no idea what the problem is.  I do mourn her loss however, and it pains me to think of the relationship we could have had and should have had.  Heavenly Father knows my heart and He compensates for all of our tears and our sorrows.  My daughter has her agency and He would never interfere with that, no would I . . .  but somehow He manages to make up for it and I have Noelle . . .  and Tatiana   . . . and Ariana . . .  and quite a few other precious souls/women/daughters of the heart that sort of make up for it.  I am blessed. 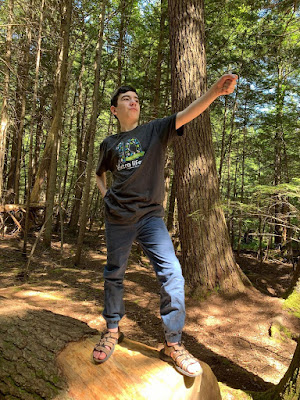 I was messaging with my son earlier this week.  He had messaged me to wish me a Happy Birthday, and sent me a couple of pictures of his boys.  These are their super-hero poses from a hike they were taking in the woods  . . . 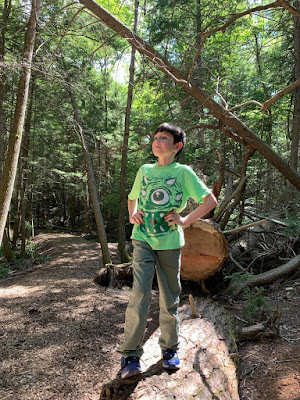 They are grown into lovely boys and  my son is a very thoughtful and caring man.  I love them so very much and I am grateful for a son who takes the time to make sure that they know who I am.  I can't wait to see Anthony in October. Six years is far too long to go without seeing anyone from your family.  I wish I could see all of my children and all of my grandchildren.  Maybe one day, hopefully not in the too distant future. 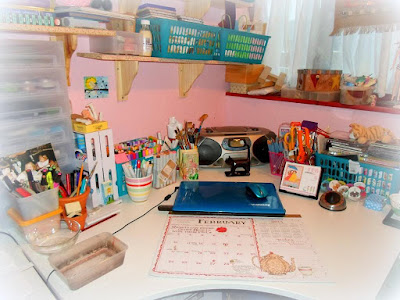 I finally got inspired enough yesterday to start sorting out my craft room, yet again. Nothing crafty has been happening for the most part, no art, no nothing because I have had no space in there on the work tops to do anything.  I know, it sounds terrible doesn't it.  Well, truthfully its been a real mess.  Every time we have sorted out any other room, everything has just gotten dumped into the craft room.  I have a habit of making little project boxes and using plastic boxes to gather together materials to do individual projects and then I never get the materials put back where they belong afterwards. So I have plastic boxes to undo and sort and materials to put back where they DO belong, etc.  Maybe once that is done and once I get rid of the tat some real crafting can happen.  My fingers are itching to paint and to sew and just to create.  That Alice In Wonderland happened on my dining room table and that shouldn't be the case, not when I have a room in the house that is supposedly dedicated to creating. 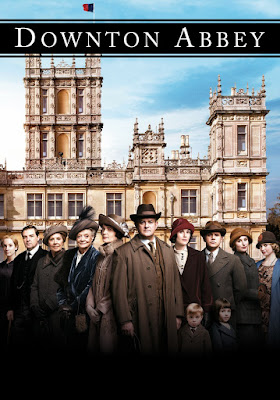 We have been watching Downton Abbey again in preparation for the film which is due to come out soon.  I can't wait for it!  I really hope that it doesn't disappoint!  I am sure Julien Fellowes won't let us down.  As least I hope that he won't!  I am praying and hoping it will be worth the wait! 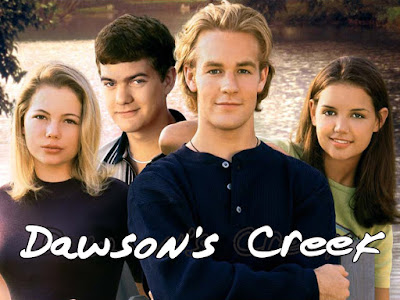 Something else, my dirty little secret  . . .  I've been watching Dawson's Creek. I never got to watch it when it aired the first time around and I admit I that I am enjoying it now. I used to watch Beverly Hills 90201 with my girls back in the day.  I felt that it opened up a dialogue that we could use to talk about issues that teens were facing at that time. This was pre-Dawson's Creek.  My girls are both 41 and 40 (almost) years old respectively. I have fond memories of the hours we spent sitting on my bed watching the BH gang.  Of course all of these people are much older now.  Some are even no longer with us . . .  mind boggling to think about.  Have you seen Katie Holmes lately? 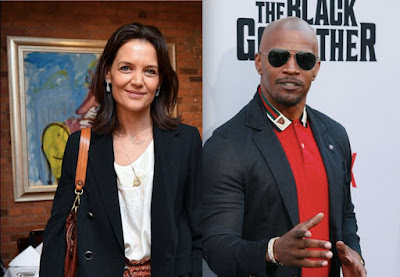 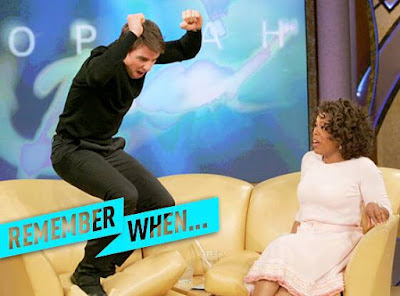 WE all have our cringe worthy moments I am sure  . . .

We don't have cable TV anymore, or SKY as it is known over here.  We rely on Prime and on Netflix and it keeps us very happy. Television on demand and just what we want to watch.  We have had Prime for about 4 or 5 years now, maybe longer.  I had no idea until yesterday that there was also a Music option that we could listen to.  DUH. Its great!  And its included in the package.  Free play lists, etc. We enjoyed some lovely old Country music yesterday while we were puttering and I am listening to some nice music now.  Who needs cd's anymore? 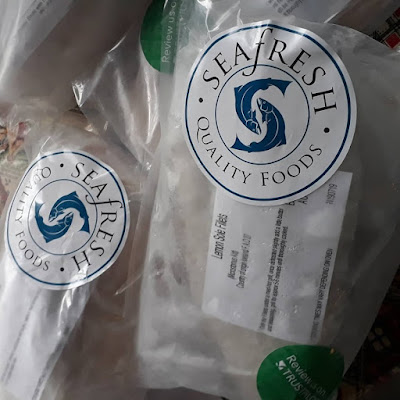 I got another parcel from SeaFresh yesterday.  This time it has Lemon Sole Filets in it, along with Sea Bass, Mahi Mahi and Tilapia.  The only one of those fishes I have ever eaten is the Lemon Sole and I love it.  There has been some controversy brought to my attention about the Tilapia.  I am not sure what to think about that.  One person my my FB page has been quite out there with her opinion of it. I have not read any of the negative press on Tilapia. She said she would never eat it that they are like the garbage sea gulls of the ocean  . . .  but then again, people eat and pay big bucks to eat Lobsters, and they are like the cockroaches of the ocean.  What to do, what to do  . . . 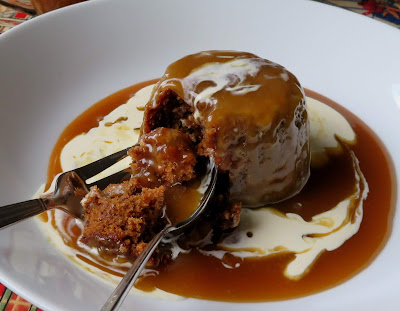 In The English Kitchen today  . . .  Baby Sticky Toffee Pudding Cakes.  Seriously scrumptious, but what is even better, you can totally make them up to two days ahead and then just reheat on the day.

Have a fabulous Saturday.  Don't forget along the length of your day . . .