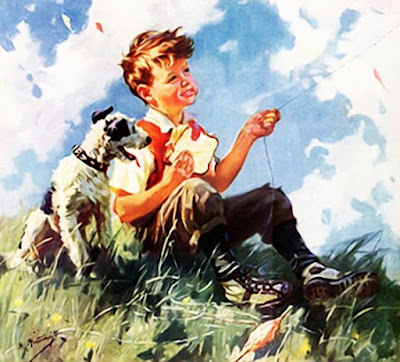 Now that August is here . . . everything seems to slow down  a bit.  The wheel of the seasons rolls slowly through this month.   It is a time when nobody seems in much of a hurry. The dairy cows which pasture in the fields next to the housing estate where we now live seek the shade of  tall ancient oaks which abut their pasture. They stand there dreamily chewing their cud.  Cats tiptoe along the tops of stone walls at dusk making their way home . . . there is no hurry after all . . . even Mitzie seems to lack her earlier enthusiasm in chasing them, doing so only in a half hearted fashion.  Normally we would be noticing real growth of the fruit on our pear and apple trees . . . but alas this year there are very few.

When I was a child we called these the "Dog Days" of August, for our days were hot and long. They were the sultry days of summer. The ancient Romans noticed that the hottest days of the year, that is, in late July and early August, coincided with the appearance of Sirius . . .  the Dog Star, in the same part of the sky as the Sun. Sirius is the largest and brightest star in the Canis Major constellation, and in fact, it is the brightest star in the sky.  The ancients believed that this star contributed to the heat of the day . . .  who am I to disagree? 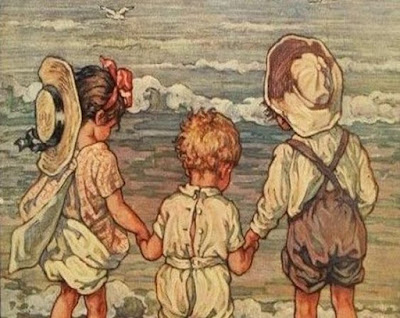 Many people go on Vacations in August. That is traditional here in the UK because the kids are now all on their summer holidays, most having started them in mid to end July.  I know in America they are getting ready to return to school shortly.   It is funny how things differ from place to place, and yet . . . at the same time, we live in a much smaller world.

August seems to hold a short hiatus between all the hard work in the garden of mid-summer and the brisk autumn days of getting all ready for the Winter ahead . . . a quiet before all of the harvesting the remaining fruit and veg . . . but as I said before . . . there is no hurry. 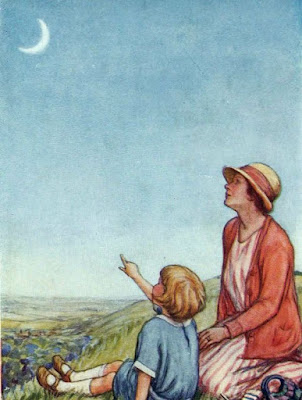 Even the weeds in the garden seem to slow down a bit.  It seems to be the natural time for man and Mother Nature to relax, a time for dreaming . . . for having a thoughtful look at life . . . and for being a bit lazy in letting some of the chores go by the board . . . after-all . . . what's the worst that could happen?

Our quiet garden definitely seems to lose a lot of it's oomph in August.  As Todd and I wandered around it with Mitzie last evening we noticed that the back garden at least . . . has seen it's best. Everything is beginning to look a tad tired.   I said to him, were we really knowledgeable about these things, we would know which plants and flowers to put in and where, so that we would have a continuous bloom. So that just as one finished, another would spring up to take it's place.   It was like that in the Herbaceous Border at the manor down South.   There was no time of year that it was not a delight to walk through it. But then again, she had dedicated gardeners and a garden planner/designer at her beck and call  . . . 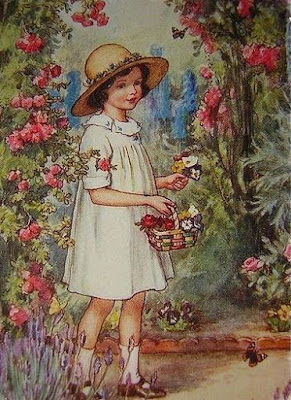 I cannot afford two full time gardeners though . . . there is just Todd and myself, and I am much better at supervising than I am at doing any actual leg work.     I enjoy gardening like I enjoy my sports . . . from the vantage point of the comfort of my chair.   Todd doesn't mind.  Just as I don't like too many hands in the kitchen, he doesn't like too many hands in the garden.  He is content to allow me the luxury of enjoying the fruits of his labours visually rather than tactorily . . . is that a word?   I don't know, but I think you know what I mean. 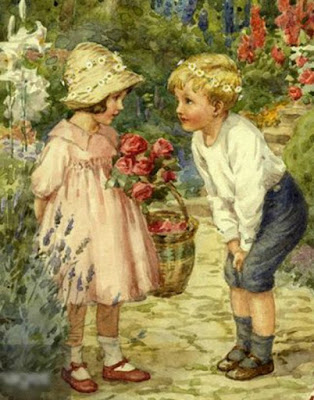 This is the month of seaside treasure seeking . . . you never know what you will find.   The empty shell of a crab claw . . . dried seaweed, sea glass . . . cockle shells . . . flat stones polished smooth from being bashed against the shore, time and time again.  If you are lucky you might find one shaped like a heart . . . or even with a hole bored through it. 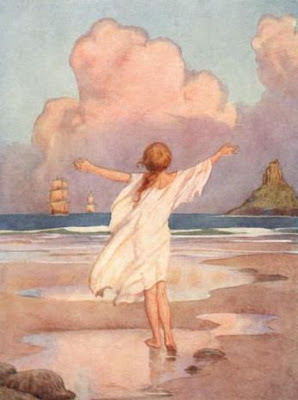 As a child I had many such treasures . . . I still do.  They are all tucked into the china cabinet in a tiny box.  A tiny feather that surprised me, a piece of beaten sea glass, a tiny glass toadstool  . . . I have stones that I collected from an area in Scotland when we were there. The area we had visited was supposedly used in a scene from one of the Harry Potter films.  I was going to send these stones to the grandsons, but alas, I can no longer remember where the area was or the information about the scene was that was filmed there.   Without those details,  they are just  . . .  rocks. 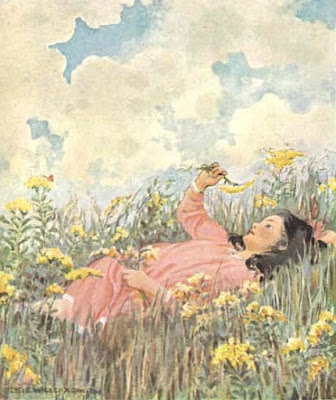 Oh what magic the dreamy days of August held for me as a child . . .  its a pity we have to grow up.

I was talking to Eileen, my oldest daughter yesterday.  She expressed to me that she wanted to have a blog.  I told her if she wanted to we could set one up when she is here visiting in October.  She said no, she wanted to do it now and she wanted to do it all by herself.  Here is the link to it:  Eileen's Happy Page.   She never ceases to amaze me with the things she can manage to do all on her own without any help or guidance.  For someone who is supposedly "disabled" she is really more than capable. I am really proud of her and always have been.  Why not pop on over and give her some love! I think it would really make her day! 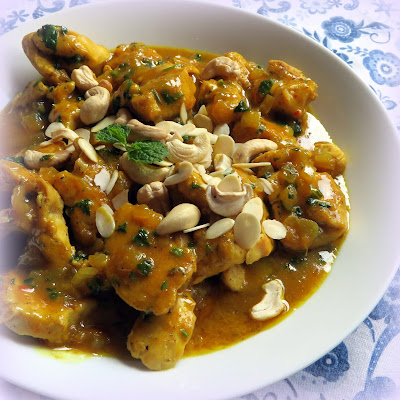 Have a wonderful Wednesday.  I will be busy, busy, busy    . . .  polishing my lesson for Sunday, working at my online writing job and other odds and sodds.  Whatever you may get up to, don't forget!