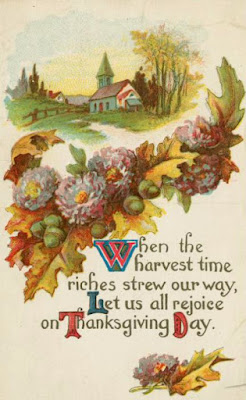 There were very few times when I was a child when we were allowed to gorge ourselves and eat our fill of whatever.  My mother had been overweight when she was about 13/14 and she was determined that her children would not be and so she really kept a close watch on what we ate and when. Thanksgiving and Christmas were the few exceptions to her rule, and on those days we could pretty much go to town, within reason of course. 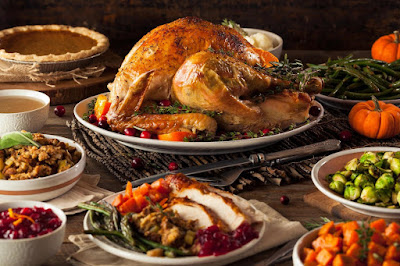 We always had turkey. always, always, despite she and my dad having had food poisoning from a Thanksgiving turkey early on in their marriage.  They didn't have a refrigerator and had kept it outside on the roof outside the window of their apartment. Its a wonder it didn't kill them.

Mom always started her turkeys the night before.  She had a huge roasting pan that had come with her Wearever Aluminium Waterless Cookware that they had bought early on in their marriage. 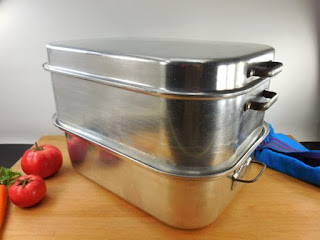 This thing was E NOR MOUS!  But it cooked the best turkeys. (I hope my sister hung on to it.)  It sat over two burners. Mom would start off by seasoning the bird all over and then browing it  in the bottom of this roaster, all over and then she would add a bit of water and start to simmer it for a bit.  Now is when it got interesting and I am still amazed that none of us died.  She would do this prior to going to bed the night before and then pop the lid on, turn off the burners and go to bed, leaving it sitting there over night.

I KNOW!
Yet somehow it never killed us or made us ill.

She would then stick it into the oven to finish it off the next day.  We were tantalised by the smell of cooking turkey all the night through and all the next day.  There was NEVER a dry turkey that I can recall. Never.  And her gravy was phenomenal.  She never had to use stock cubes or anything.  Just the juices from the turkey, which included the original browning and water that she had simmered it in.  She would shake together flour and water to thicken them.  Salt and pepper.  Best gravy ever. 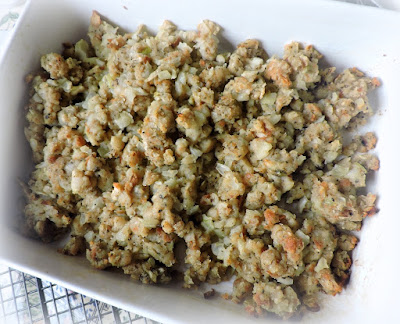 (sage and onion stuffing from my food blog)

Her stuffing was legendary.  I have never been able to make it taste like hers did, no matter how hard I try, and so now I don't.  She didn't buy special bread to use in it, just ordinary bread that we had every day.  Hers was a potato and bread stuffing.  She would cook extra potatoes for her mashed potatoes and some of them would be used for the stuffing. To that mash she would add the torn bread, some turkey juices, poultry seasoning, sage, salt, pepper and some chopped raw onion.  She had no recipe, she just did it, and it always tasted amazing.  We all loved her stuffing. It didn't bake inside the turkey, it didn't bake in the oven, except for a very cursary baking to keep it warm while she cooked the vegetables.  It was delicious. 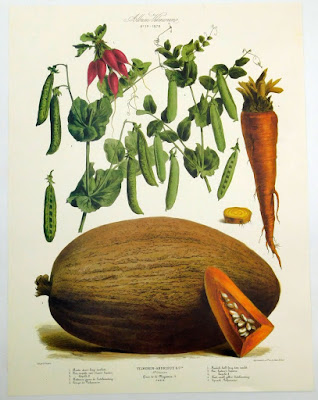 The vegetables were likewise very simple  . . .  mashed squash, and it would not have been butternut, most likely hubbard.  Sliced carrots, tinned peas and the piece de resistance, mashed turnips.  They were my favourite thing.  Mashed turnips.  She also used some of her mashed potatoes in these.  The actual vegetable used was a Rutabaga or a Swede as it is called over here.  She would boil it until tender and then mash it along with some of the potatoes from her mashed potatoes.  There were no special seasonings used for any of her cooking except for the stuffing and turkey.  Salt and pepper.  That was it, and plenty of butter. 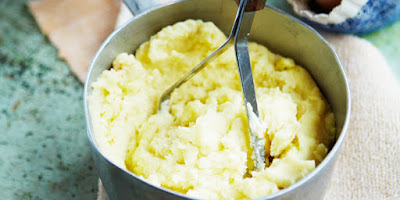 Mom made the best mashed potatoes.  She had an old wire potato mashed that she used, the paint on the handle all worn from years of use.  Potatoes, milk, butter, salt and pepper and her secret ingredient  . . .  a tiny bit of finely minced onion.  You would not believe the lift that tiny bit of onion gives.  They were amazing. 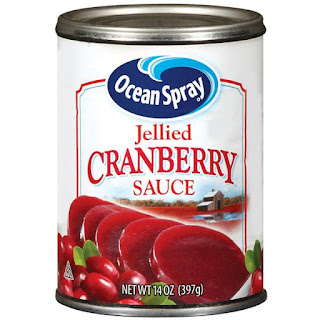 Sometimes we would have cranberry sauce, sometimes not . . . she never made it from scratch. It always came from this tin  . . .  Ocean Spray and it was always the jellied one, without the bits of cranberry in it.

And that was our dinner  . . .  We would fight over who got the drumstick.  Three kids, two drumsticks. I don't know why.  As an adult it is my least favourite part of the bird. But kids  . . .  we probably wanted to look like Fred Flintstone or summat . . .  I don't think any of us ever got a whole drumstick, just pieces off it and some white meat.

Mom always used her best dishes on special occasions and her silver cutlery.  The cutlery was kept in a special wooden chest on the sideboard.  It never tarnished because there was something special in the chest that kept it from tarnishing. I can remember how it smelled, that chest . . . it had the smell of holidays. I suppose because that was the only time it was opened. 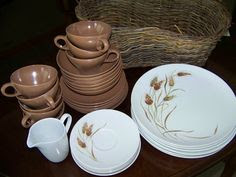 This is similar to the pattern of mom's good dishes.  Not china.  Melmac.  The only difference being that hers had a few more pieces to the set and the brown was a darker brown.  There is a story behind this set of dishes as well.  My father had a small business that he ran on the side of his full time job in the airforce.  AV Electro services.  He serviced televisions and put up television aerials.  (The AV stood for Anthony Villeneuve)  One time he brought us all with him on one of his "business trips" into Winnipeg and we all waited in the car while he was having his meeting.  It went on overly long and at the end the guy he was seeing came out to the car with a brand new set of these dishes for my mother as an apology for us having had to wait in the car for so long.  Cups, saucers, dinner plates, side plates, dessert nappies, cream and sugar cruets, etc. Mom treasured these dishes.  They got used at best twice a year.  You could take your Limoges or Herend china and shove it. She had these and they were much treasured by her, and by me.  They still looked brand new the last time I saw them.

Its funny how many memories are invested in things like this  . . .  in large aluminium roasting pans, worn and scratched with age, twisted metal potato mashers with paint worn handles, blonde wood boxes holding silver plate that smelled funny . . .  plastic melmac dishes, printed with wheat sheaves. None of it, in and of itself worth a lot of money to speak of, but oh the memories that are attached to them.  Priceless.  Love. Family. Home. Faith.  These are the things in life that matter most. 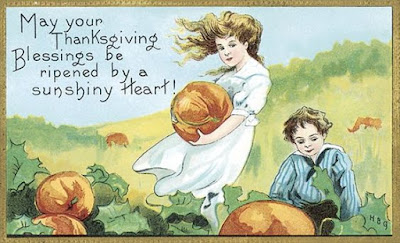 A very Happy Thanksgiving to all of my Canadian family and friends. 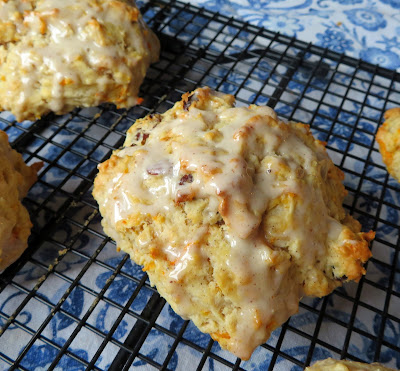 Have a wonderful day.  Don't forget!