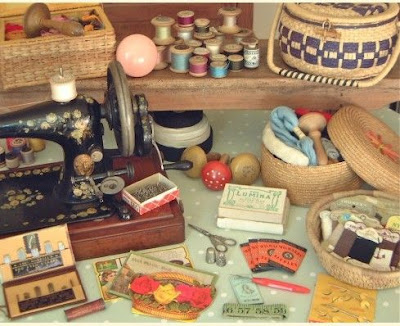 Old fashioned buttons on a piece of string
My brother had them on a velvet coat,
A pen nib bright as gold, a bit of lace
A fish hook and a little scarlet float.

A piece of beeswax filled with cross-cross lines
She used to grease the thread to make it strong,
for sewing buttons on - a crochet hook,
A little clapper from a dinner gong.

Worthless - I know - but here I see her best
Rocking and sewing, singing to herself,
Her clean print apron gaudy as a flag,
Her crinkled Irish eyes as blue as delph,

(God gives us mothers with old fashioned rules
And Scented baskets made to hold their tools.)
~Edna Jaques 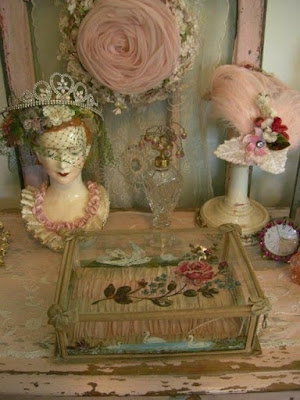 My mom never had a fancy work basket, not that I can remember, but I remember the button boxes in the basket she did have  . . .  old tins that my father had brought home from work.  Each one had a piece of  masking tape on the top with its contents handwritten on it in black marker.  Those tins held magic for me, like a pirates coins . . . jewels cut off old garments that were being put into the rag bin and not worth salvaging for much else, but the buttons.  I remember the old wooden spools of thread. You never see a wooden spool holding thread anymore  . . .

My mother taught me to embroider, probably when I was around 8.  Mom loved to embroider, and her linen cupboard was full of things she had embroidered. Tea towels, pillow cases, dresser scarves . . .  I have an old linen tea towel that she embroidered and I treasure it. Todd is not allowed to go near it with his paws . . .  you know men, they think nothing of wiping grease filled hands on something they shouldn't.  I have always been so grateful for my mother's patience in teaching me how to ply a needle and thread.  I wish I still had some of those early labours of mine, but I don't, but I have enjoyed a lifelong joy for the needle arts, and I believe it is largely due to her. 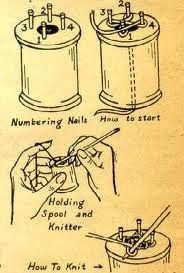 I remember one time my father hammered four small nails into the top of an empty wooden spoon and my mother gave me a large safety pin and taught me how to spool knit . . .  yards and yards of coloured snakes were produced, coiled and sewn together as a matt . . . it was a good way to keep us busy for hours on end. 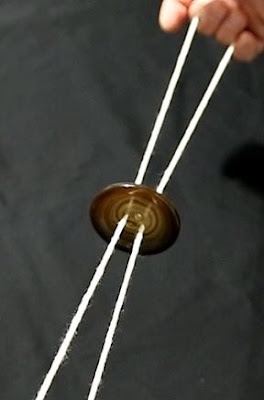 Sometimes a large button and a length of twine were fashioned into a spinner that could occupy me for hours and hours, until I wore the twine out.  Simple days and simple games . . . I don't remember ever really being bored, at least not that I would admit to, for I knew if I did some chore would be found for me to do . . .  as long as I had books to read, or my paper dolls . . . I was never bored anyways  . . . 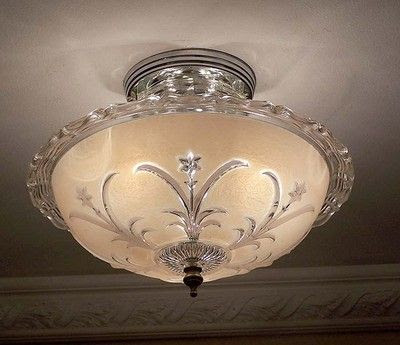 I remember one time my mother getting us fancy light shades for our ceiling lights in our bedrooms . . .  oh nothing as fancy as this, although I am sure mom would have loved this.  They were just ordinary square ones, but they were coloured.  My brother had blue and my sister and I had pink.  We also had matching chenille bed spreads . . . not expensive again, but prettily patterned in their own way. Mom was very thrifty.  She knew how to squeeze two pennies from out of one, but our home was always comfortable, tidy and clean . . .  and we always had clean and tidy clothes to wear, a proper dinner on the table.  She taught us to pray and I have no recollection of ever closing my eyes to sleep at night without praying.  No recollection at all, so that lesson is one which really stuck.
Mom was a praying woman.
She prayed for everyone and everything,
even the hockey playoffs. 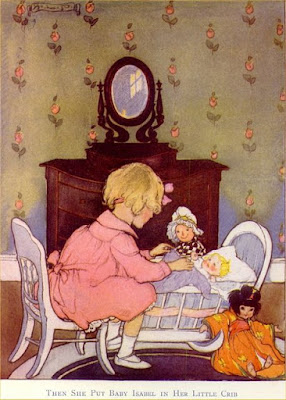 I awoke at 2:30 in the morning last night and had a difficult time going back to sleep. I went into the other room and listened to a conference talk and then fell back into an uneasy dreamy sleep until 5:30 upon which time I got up.  It is the usual time I get up anyways.  Mom was always an early riser until the last year or so.  I have always been an early riser also.  I cannot stay in bed once I wake up. I can not just lay there and doze . . .  I need to be up and doing all the things I want to get done in a day!!!  Morning is when I am at my brightest.  I really fade come evening time . . .  sometimes even by mid afternoon.  Morning is the best time for me to do anything.

I was laying in bed as I tried to go back to sleep and I realised that this is the first time in my life I have no place to go home to . . . I have spent my whole life comforted by the fact that if I needed a place to go, I could always go to my mom's, and I have had to do just that on several occasions.  I will never own my own home now, not unless I win the lottery or something, which could only happen if I bought a ticket, and I don't.  Ahhh . . .  another mom memory.  Mom bought lottery tickets every week for as long as I can remember, up until the last year or so also.  I remember when I was really young, she would buy Irish Sweepstakes tickets.  She never won much more than a tenner or some such.  Never a big win, but boy did she have dreams of what she would do if she did.

I got a copy of her will in the post this week and she had included a note to her children.  It made me cry. Buckets and buckets of huge weepy soppy silent tears.  I was grateful for it, but at the same time so very sad.  It is to be expected I guess . . .

And then at one point this week I came to the realisation that things will probably never ever be any better between myself and several of my children, which also made me sad.  I stumbled onto the announcement of my youngest son's promotion on Google, from a year ago, and nobody told me, not him, not anyone.  I suppose it was no-ones job to tell me but his, and . . . well, it is what it is.  At the same time however,  I am very grateful for the three children that I do have a good and strong relationship with.  I am counting my blessings where I find them.  Despite what makes me sad, I have much that brings me joy. My faith upholds and sustains me. 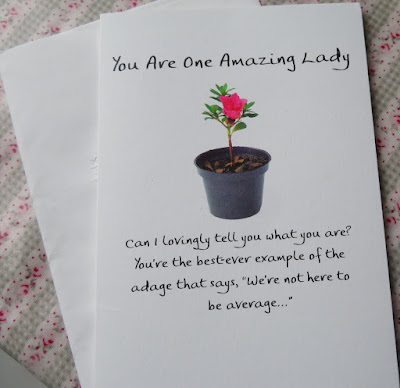 God's timing is perfect however,  and He knows just when you need to be lifted because the day after my soppy day, this arrived  . . . a lovely card and letter from my friend Noelle in Halifax, NS.  I was so uplifted by her words, so uplifted, you can't imagine.  We have been friends for a long time now, although we have never lived near each other. We carry each other in our hearts. 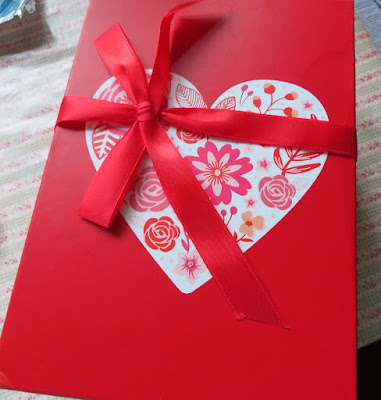 A lovely package from my special friend in Toronto.  I won't share her name because I don't know if she would like it, but we are kindred spirits in many ways.  Thank you so very much, both of you. 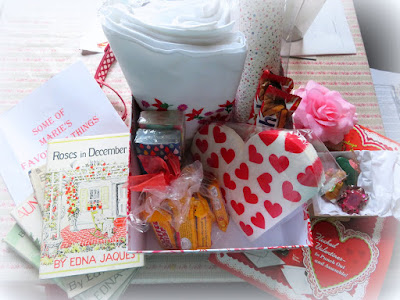 Such a kindness, such two kindness's.  From Noelle and from E of T.  Really from God, because you know that when God can't be there Himself, He sends His angels . . .  and His timing is always, always perfect.    Never suppress a generous thought, you don't know where it is coming from. 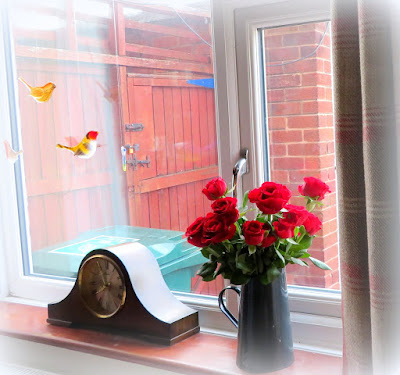 Indeed, despite my sometimes aching heart . . .  how can I keep from singing?? 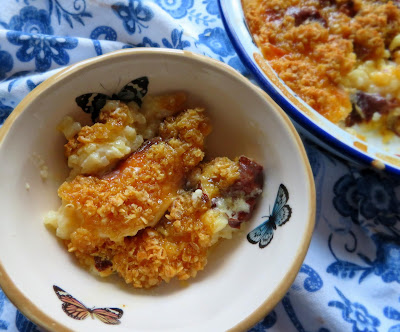 Have a beautiful Saturday. It is our Stake Conference this weekend.  Looking forward to more spiritual nourishment.  Stay safe and warm, and no matter what you get up to  . . .  don't forget!