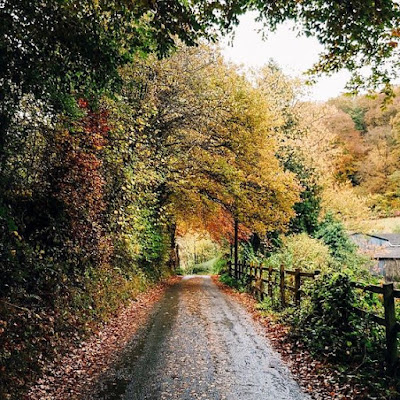 On the 5th of November each year here in the UK, they celebrate what is lovingly called Bonfire Night.  What it is actually is a night that the whole country celebrates and marks an Act of Terrorism that occured back in 1605 when a man named Guy Fawkes and his friends tried to blow up (unsuccessfully) the Houses of Parliament.  The Gunpowder Plot. A failed conspiracy of a bunch of  provincial English Catholics to assassinate King James and replace him with a Catholic head of state.  Guy Fawkes was the guy caught guarding the explosives beneath the Parliament Buildings. 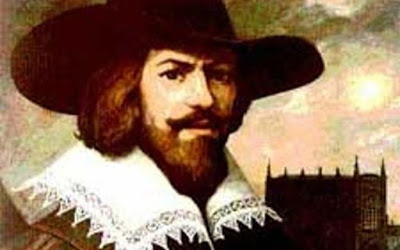 He was tried for treason, found guilty and executed

The proper name for the night is Guy Fawkes night and it is marked all over the country by the setting of huge Bonfires and Fireworks displays.  An efigy of Guy Fawkes is usually burnt on the Bonfire and people eat Bonfire Night kinds of foods such as toffee apples, sausages in buns (which they call hotdogs, but really aren't hotdogs), hot soups and Oatmeal Parkin (which is a kind of cake). People really enjoy it. In fact we have some stuff set up in our back garden to have a bonfire ourselves, albeit it a smaller one. 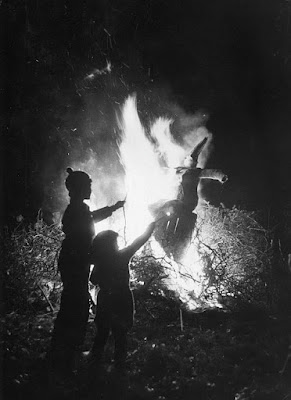 When I first moved over here instead of Trick or Treaters we got kids knocking on the door begging "pennies for the Guy."  So you had to make sure you had a lot of pennies in for Halloween.  They would use these to buy fire works.

Starting about the end of September here in the UK, you can buy fireworks in most of the grocery stores. They usually have a display set up and you can buy a whole set of them.  And stupid people start setting them off just about every night up until long after Guy Fawkes night.  As a pet owner I find this very annoying.  Mitzie doesn't like them, the dogs next door don't like them, and I can only wonder what the wild animals think.  Mitzie finds them very upsetting.  I wish they would ban the sale of fireworks and just have community controlled fireworks displays on the night of November 5th.  Everyone could sedate their animals for one night only, problem solved . . .  but no, the sillies have to carry it on for nights and nights and nights.

Last night was bad for it.  I suppose people were taking advantage of a dry night and having fun, even though it was only the 2nd of November . . .  they'll do it again on the 5th for sure.  You should have heard the dogs next door.  They are quite barky generally anyways, but last night they were going absolutely ballistic.  I usually put Mitzie under a blanket and she growls a bit, but seems to stay calmer.  She was never bothered by them when she was a puppy, but it has gotten worse as she has gotten older.  By the way she was given a clean bill of health from the Vet the other day.  He never mithered about her weight, her teeth were good, none of her lumps were anything to be bothered with, she had her booster and he cleaned the wax out of her ears. Done and dusted for another year! 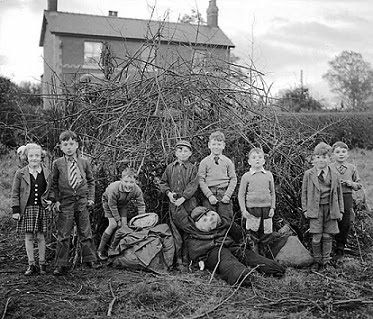 Don't you just love this photograph?  It was taken on Guy Fawkes Day in 1954 in Wales.  they're in their school uniforms it looks.  Boys used to wear short pants back then until they reached the age of 12 I think. Must have been cold in the winter for them!  They've got their "Guy" all ready to throw on the Bonfire.

Usually each year they have a huge bonfire in the vacant lot at the end of our Garden, along with a ton of fireworks  It didn't happen last night, so I expect we still have that to look forward to.  Someone said that one shop was selling noiseless fireworks this year.  Dare I hope? 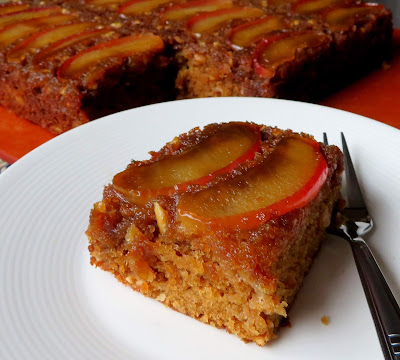 Finally a new recipe next door in The English Kitchen for Upside-down Toffee Apple Brownies!  A real treat for Todd!

Have a fabulous Sunday!!   I feel well enough to go to Church today so am happy about that. Still twinges in my back, but so much more bearable. Yay! Its fast and testimony meeting as well, so I am looking forward to hearing the testimonies of others which always help uplift my own.