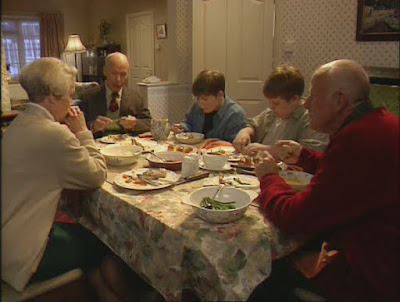 We started series five from the television show "One Foot in the Grave" last night.  Entitled "The Man Who Blew Away," in this episode the Meldrews get a surprise visit from Mr. Foskett, whom they know only because they stayed in the same guest house 17 years ago. He arrives with two lads whom the Meldrews think are his sons.  The Meldrews end having the lot for dinner and the lads proceed to practically eat them out of house and home! The Meldrews think they are Mr. Foskett's sons, and Mr. Foskett thinks they are the Meldrew's grandsons, but they are really the sons of a neighbour.  They have been playing all sorts of practical jokes on Victor Meldrew in the weeks previous, some really devious things, and their father had sent them down to apologise.  They stayed for dinner.  haha  Terrible table manners and they never stop eating. We thought they were Mr. Foskett's sons also. Mr. Foskett is a man who never stops talking and never lets anyone else get a word in edgewise.  It is all quite funny.  I adore British Humour. 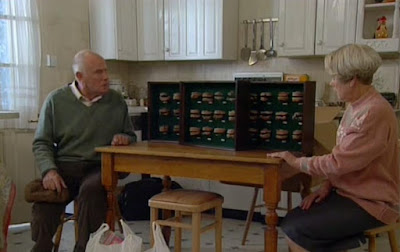 There is always a twist however in One Foot in the Grave.  Mr. Foskett dies and leaves Victor his "False Teeth" collection, because Victor had shown a keen interest in it.    Do something to be polight eh?  And look where it gets you.  This was so funny.  What kind of people collect false teeth.  haha   I know  . . . . 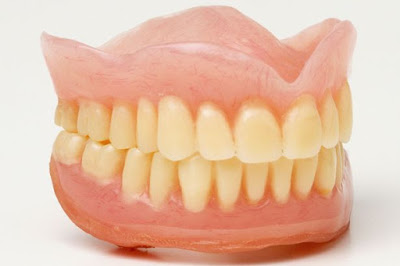 Now this is a funny story.  We moved to Nova Scotia when I was just about 11 and she was just turning 8.  While we were waiting for our furniture to arrive we lived in an apartment which had been created on the upstairs floor of our maternal Grandfather's house in Lawrencetown, Nova Scotia. My grandfather had died the year previously, but his second wife still lived there. She was not a very nice woman, and I am sure she charged my mom and dad an arm and a leg for the priveledge, but that's a whole other story.  There was an old woman across the road who had passed away, named Mrs Puddington.  Her family had put a bunch of her belongings out by the roadside for the rubbish collecters to come and get. You know what kids are like. My sister decided to investigate the treasure horde and came home with two amazing finds . . .  a framed picture of Mrs Puddington's black cat  . . .  and  . . . you guessed it!  Mrs Puddington's false teeth!  My mother was horrified, naturally and made her take the teeth back.  She did, however, allow her to keep the picture of the cat, which hung in my sister's bedroom for a number of years.   One can only hope that she never tried to wear the false teeth before she showed them to my mother.  If she did, she isn't telling. ☺

Kids do the darndest things. 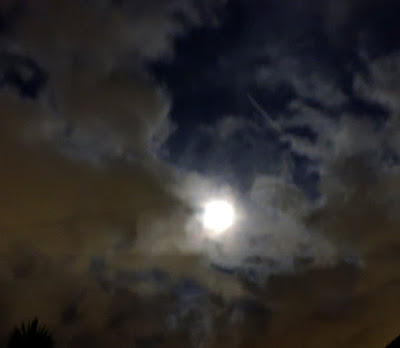 There was a lovely full moon hanging in the sky when I got up early this morning. (6 am lately, I have been sleeping in a bit.) I tried to snap a photo of it, but like everything else, I have never managed to figure out the settings on my phone so this is all you get.  It is called the Hunter's Moon and I am really surprised I actually managed to see it at all, because as you can see it was a night with a lot of cloud cover. 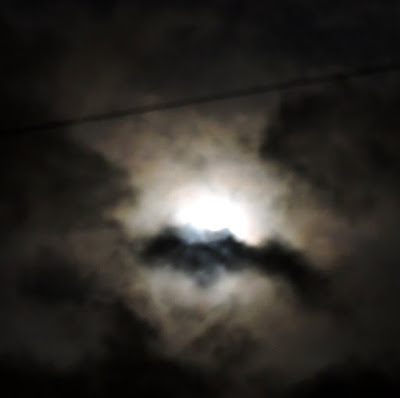 In fact, this was the scene just a few minutes later.  I thought the black cloud looked a bit like a bat, and indeed the whole picture looks a bit like a ghoulish face.  Oh boy . . .  the imagination is a powerful thing . . . 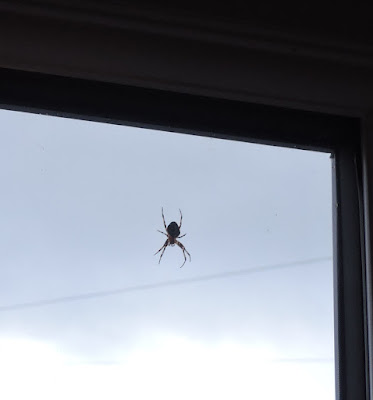 This little fella has taken up residence in the corner of our dining room window.  He is outside of course as no spider would survive inside my house.  My mother taught me to be very afraid of spiders. I respect them from afar, but if one gets into the house, my hero dispenses with them pronto.  He is a catch and release guy, which is fine with me, so long as they aren't in the house.   This one has been there for quite a while now and he is the size of my baby finger nail.  He looks much larger in this picture.  That's still pretty big however and I dread the day he disappears because I know he will then be in my house somewhere.  They say this is going to be a bad year for spiders getting in the house.  I don't know why.  Apparently they come indoors to get warm and to mate.  Horror of all horrors.  I hate spiders.  hate. hate. hate.  There is only one other creature that I hate as much and that is wasps.  Okay two  . . . rats.  Wait  . . .  three . . .  snakes.

Oh heck, almost anything that crawls.  You don't want to see me
during ant season. 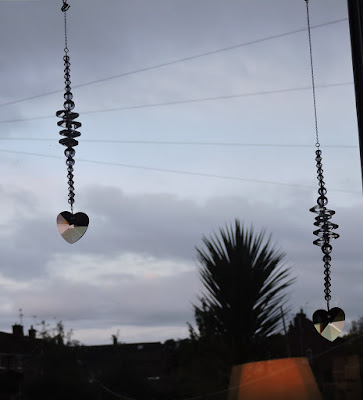 I took a picture of my two window crystals while I was at it.  I forgot to get another one when we were last up at the Horseshoe pass.  They make Pollyanna rainbows across our living room on sunny days.  It is my idea to have a whole line of them across my window, but I don't know if I will ever get that many. 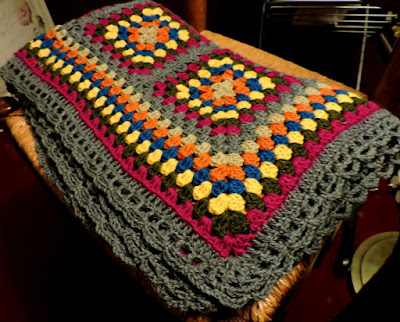 For all intents and purposes the blanket is finished and I really love it.  It is so warm and cosy and I love the colours, which aren't showing properly in this photo.  Too early in the day and the lighting is not good. I am really pleased with how it turned out however.  I have some yarn leftover and am wondering what to do with it.  My brain is ticking. 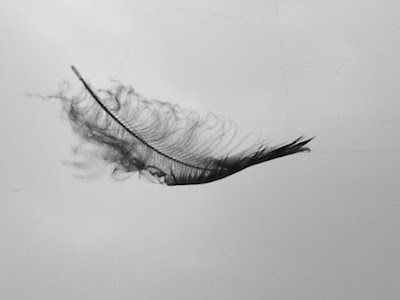 I just looked out my back window and there was a feather blowing in the wind just outside it . . . an angel perhaps? If you dream about feathers blowing in the wind it is supposed to mean travel or the ability to move freely in life. I don't really feel much like travelling these days . . .  I prefer to think that my guardian angel was just letting me know he was on the job . . . 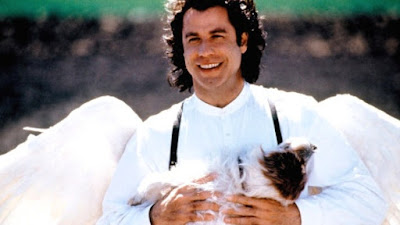 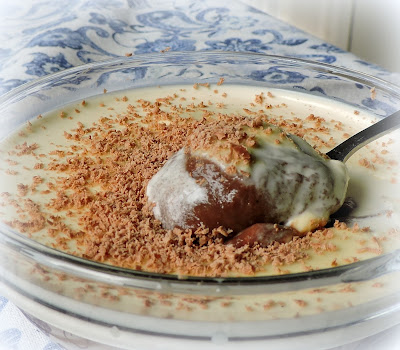 In the Kitchen today  . . . .  Chocolate Pudding.  I trusted some old advice to spoon over a thin layer of heavy cream to keep a skin from forming.  Heavenly.

Have a great Saturday.  I am going to the shops to pick up some stuff to do us a Canadian Thanksgiving Dinner on Monday. With just the two of us it won't be much, but we do have much to be thankful for!  Don't forget along the way of your day today  . . .