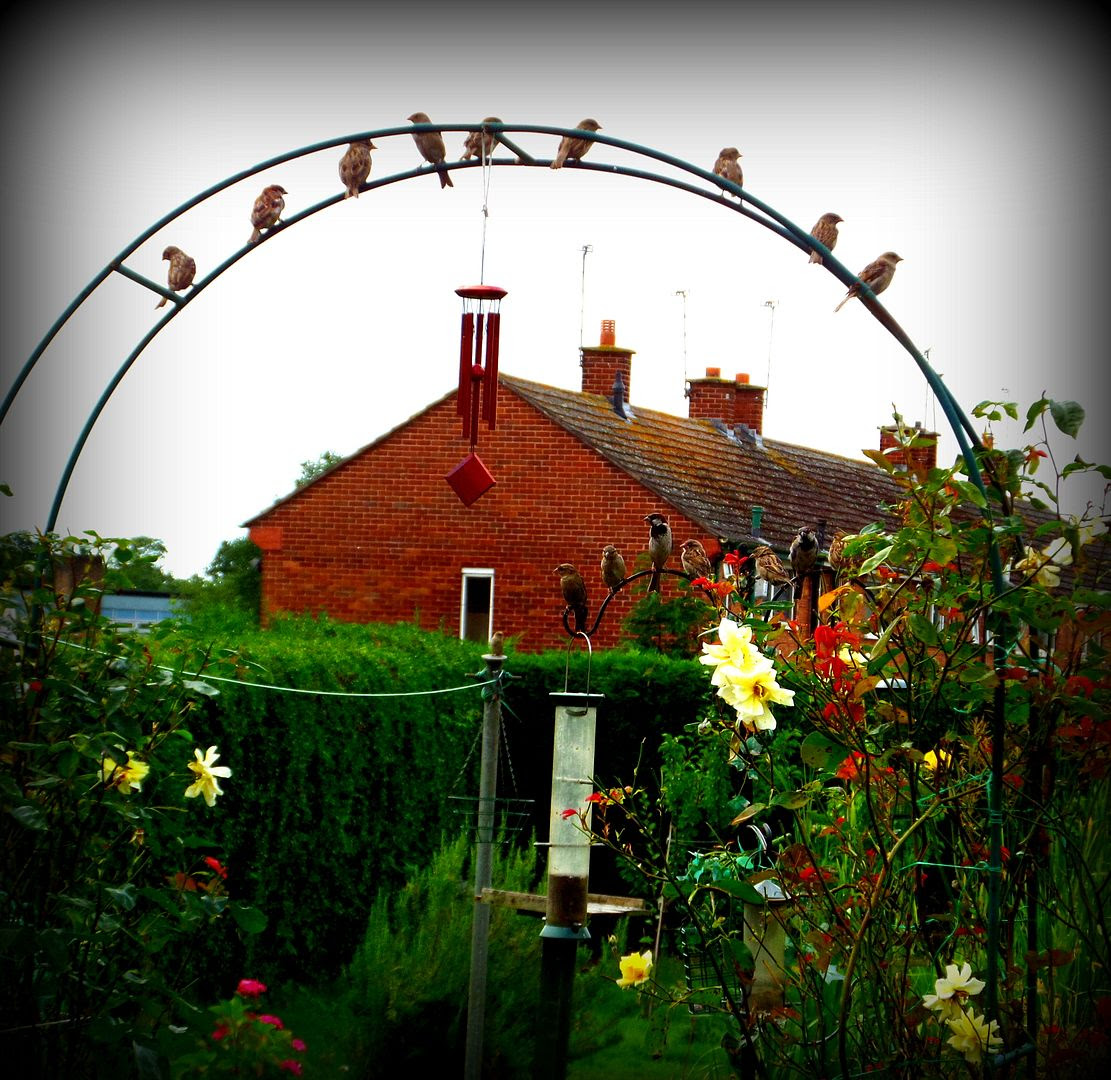 This is supposed to be the quiet time for the birds . . . the end of August, when all is silent in the woods, shadows laying darkly beneath the heavy foliage of late summer.  That doesn't happen in our garden however as the birds remain as lively and as vocal as ever.  I captured this photo of some of the resident sparrows lined up along the top of our rose arbour and on the top of the feeders.  It was like they were having a meeting of sorts. 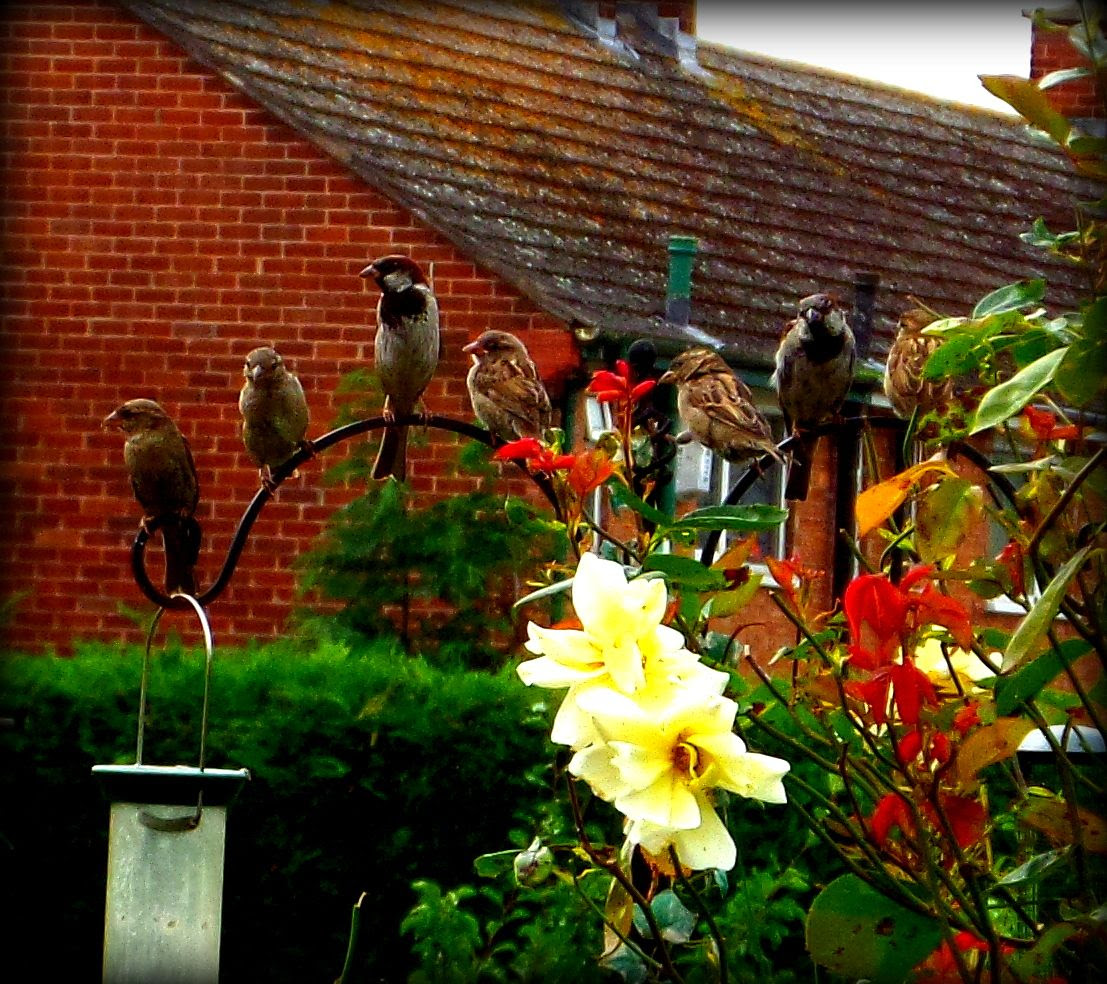 They may only be sparrows, and quite common . . .  but God loves them too . . . enough that they are mentioned in the scriptures.  There is hope for us all.  ☺

"Happy is the person who not only sings, but feels God's eye is on the sparrow, and knows He watches over me.  To be simply ensconced in God is true joy.
~Alfred A Montapert 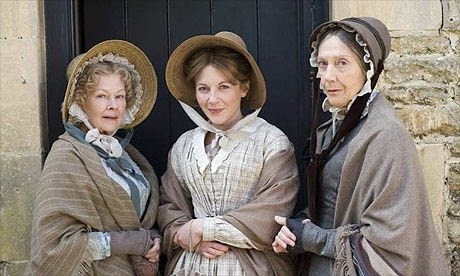 We began watching our DVD of Cranford again last evening.   We do love it so.   I had read in Susan Branch's book,  A Fine Romance, about the village of Laycock where the series Cranford was filmed and it created a desire in me to watch the series again.   It just never gets old and each time we watch it we see things we did not see the other times we watched it.  I wonder how that works . . . as it is that way with just about everything in life.   Funny how that goes.

I find the characters in it so very delightful.   So delightful that I would be hard pressed to pick a favourite.  I love each equally.  The BBC does these period dramas so very well.  It must be quite fun to act in them I think.    As a girl I had dreams of acting.  I think most young girls do.  I wanted to be Annette Funicello.  What young girl in the sixties didn't want to be Annette or Haley Mills???

I think acting must be a really fun job.  You get to prance around pretending to be other people, doing amazing things, and you get paid very well for doing so.  I know it is hard work, to be able to do it all convincingly . . . but still, it must be fun. 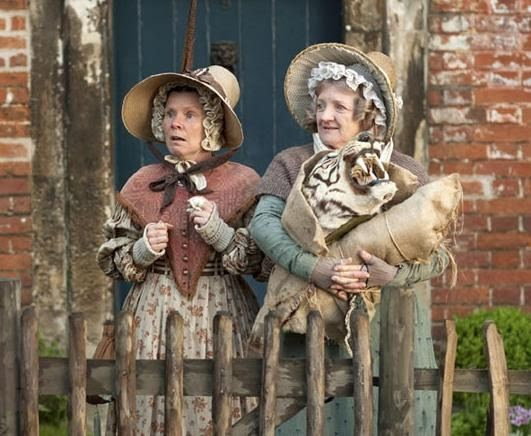 The part I wouldn't like would be the becoming famous part.   That seems an awful price to pay for doing something well.   Losing all of your privacy and having the world want to know everything about every aspect of your life and what you are doing.  I think it would be much better to be a character actor, getting to play all sorts . . . you know the type I mean.   People see them and think to themselves . . . hmmm . . . I should know this person from somewhere, but they can't quite put their finger on it, and then decide that they are just someone who looks familiar but who isn't, and go on their merry way.   I would hate to not be able to shop, or eat out or walk down the street without being mobbed or photographed . . .

The mystery is how some manage to do it and do it well, with seemingly no problems . . . and yet others implode and go off the rails.  Built up . . . only to be knocked down.   It's not a profession for the weak of spirit, mind, body or heart I don't think . . . 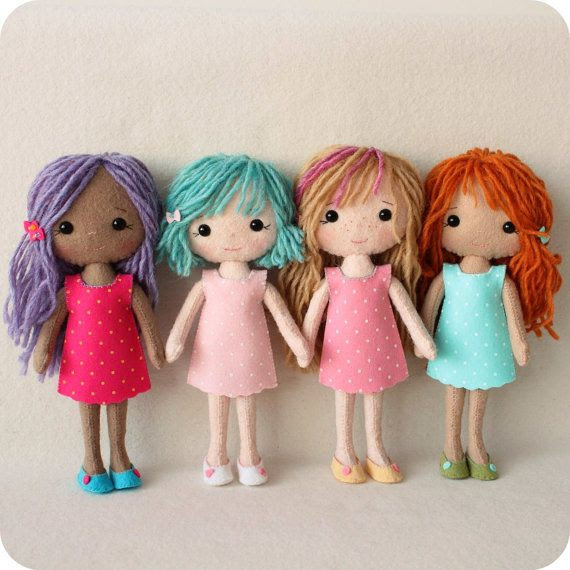 I bought a new pattern yesterday.  I want to get jump started on Christmas early.  I thought this would be a cute little doll for Maryn.   Apparently she was quite pleased with the last little one I made for her (the one with the Eeyore cap) and so I thought to make her another one.   I bought it from the Ginger Melon Shop on Etsy.   She has the cutest patterns if you like little dolls and such. 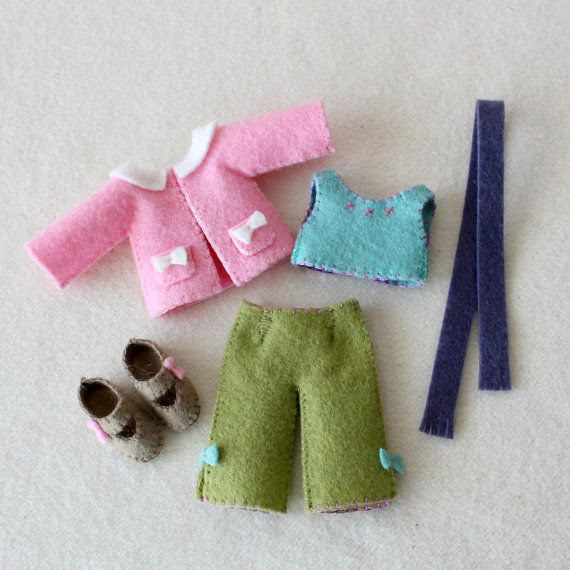 I got the pattern for an extra set of clothes as well.   I thought Maryn would be getting to the age now where she would enjoy taking clothes off and putting others on. 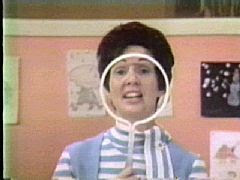 Were you one of those children who would sit patiently while Miss Nancy looked into her magic mirror, just waiting . . . breath held . . . for her to say your name???  I was.   She never did say my name and I was always disappointed.  I was a "Do Bee" and everything, but, it just never happened for me.  Permanently scarred I am.   58 years old and still feeling left out . . . invisible.  (just kidding) 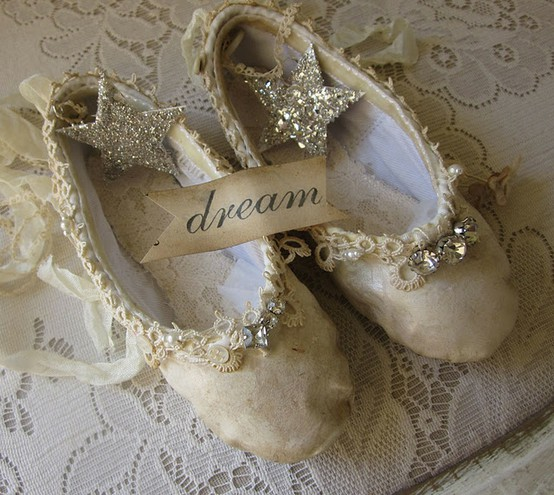 It was kind of an odd time to be growing up actually . . . we believed in Talking Horses, and Genies in Bottles, Witches who could make things happen just with the wiggle of a nose, flying nuns, friendly giants, talking mice . . . and yet we lived in fear of Russian Spies and nuclear annihilation.  I don't think that the Cold War was any less frightening than Terrorism do you?

Speaking of terrorism . . . when my sister moved back to mom's she brought two cats with her along with her partner Dan.   There was some concern on my mother's part about her cat Pumpkin getting along with Cindy's cats. 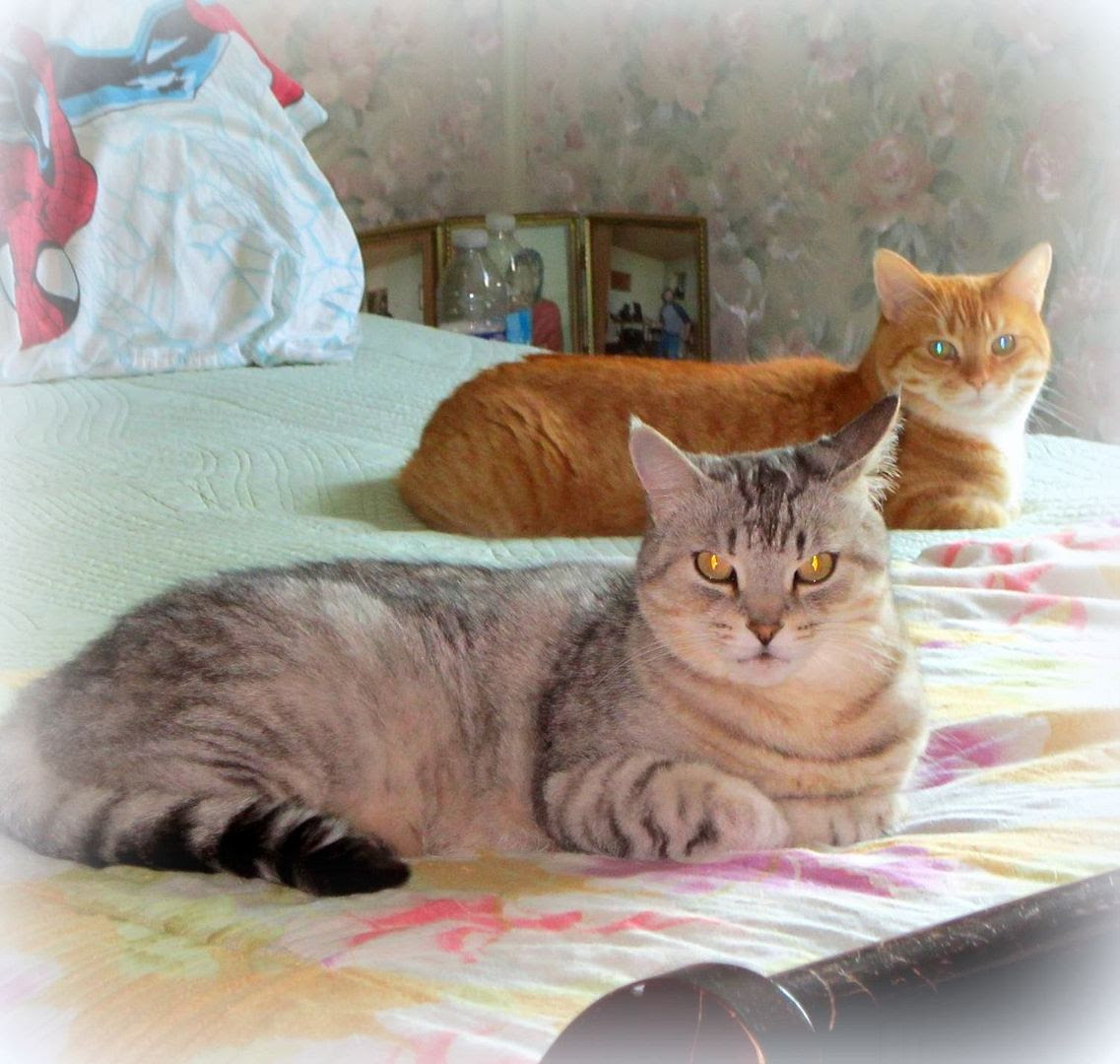 This is my mother's cat Pumpkin (the orange one) and one of my sister's cats, Link (the grey one) resting together on my sister's bed.  There is a third cat, Gary, but he's nowhere in sight in this photo.  (He's very shy.)  It's nice to see that everyone has settled in well.  I think Pumpkin is rather enjoying the extra company.  I knew that she would.  Mom seems quite fond of Cindy's cats too.    She is always telling me about the cute things they do.  If you are a cat lover I think three cats are thrice the fun as one!

Her life has certainly opened up I think . . . speaking of my mom.  I think having people around all the time, and the extra cats, and everything that this life change entails will help to keep mom going for a lot longer than if she had been left on her own.  Life now has purpose and meaning again.  That is always a good thing.  I think she is very blessed and very lucky to have people who love her in this way.  Not everyone does.

And with that I will leave you with a special thought for today . . .

"When we look for the love and greatness in others,
we find it in ourselves."
~ Taylor Hegan

I like to think that inside every person is a  good person trying to find its way out. 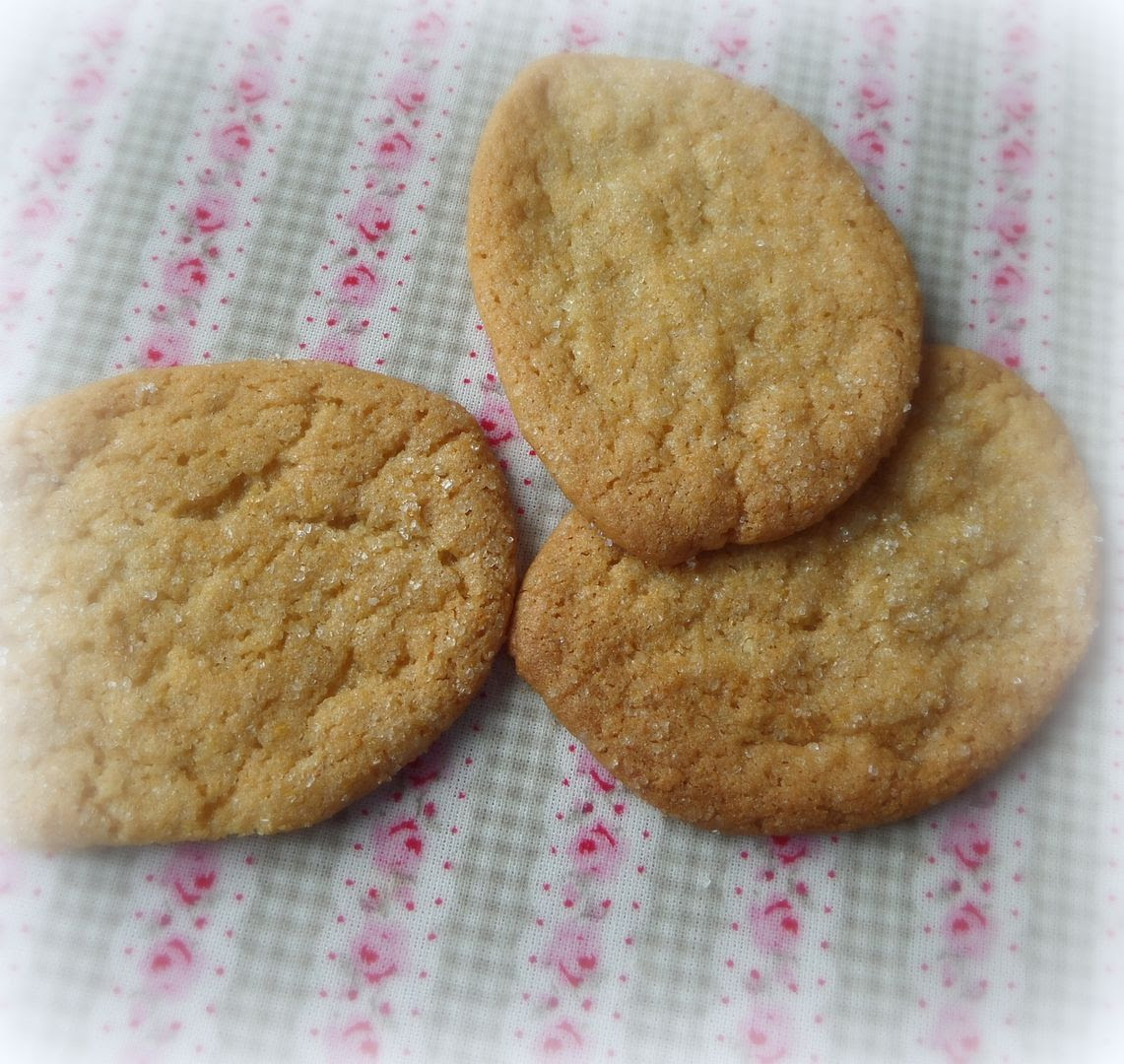 These may not look very exciting, but I promise you that they are.   Crisp Lemon Cookies, baking today in The English Kitchen.   Crisp little buttery cookies flavoured with lemon and ginger, they are a slice and bake variety of cookie.  You will love them!

Have a great Saturday!  It's raining here, but I feel better than I have in over a week!  Happy days!