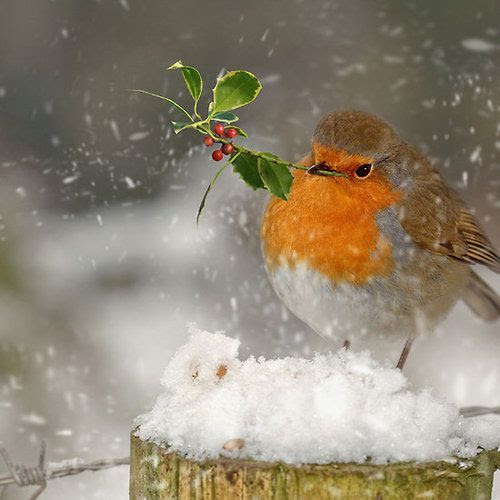 We do so love to feed the birds here in our little oasis in Cheshire. We don't get quite as many as we used to get when we lived down in Kent, but we do get some . . . and now that the weather has turned cold,   they are really quite dependent on our daily ministrations.

A tiptoe into the garden early in the morning catches their little chirps and peeps as they wake up . . . the hedge bristles with the flutterings of tiny wings . . . and here and there a head pops out now and then . . . as if to check out the lay of the land . . . or the weather that today might bring. I do feel particularly sorry for them at this time of year when it begins to get so cold. They are so tiny and the air so frigid and I wonder at the miracle that they do not freeze to death as I watch their little puffed up bodies hopping here and there and flitting from the hedge to the feeders and back again. Nature is a wonderful thing. It has allowed for every situation . . .

We have a few different bird feeders out back. There is an old beat up bird table down near the end of the clothes line, which has surely seen better years. It used to have a top on it, but that is long since disappeared. It is the first thing to blow over in a wind storm and so it got knocked off long ago and never replaced. We always say we are going to buy a new one, but then we check out the price of them and think again . . . it can wait we say. 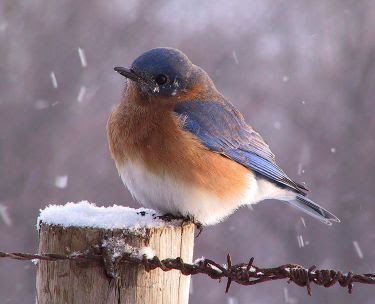 That is the table that we often see the wood pigeon sitting on. He sits and waits there in the morning for Todd to go out with the bread. That is the bread table. He's a very fat wood pigeon so he obviously feeds well. There used to be two of them but alas . . . I fear the cats that frequent our garden got the other one . . . judging from the trail of feathers they left behind. Most annoying. We have tried everything to get rid of the cats, but nothing really works, not even a crazy cocker barking her head off!!

There is the supposedly squirrel proof nut feeder. We had a lot of squirrels down South . . . very cheeky ones. There was no keeping them out of the nut feeder . . . squirrel proof or not. They always figured out a way to get at them and empty it pronto. A squirrel proof feeder that they can get into is not very squirrel proof I decided . . . and then thought, well . . . they need to eat too. Here we have never seen any squirrels at it, so it is quite obvious to me that Cheshire squirrels are not quite as smart as Kent Squirrels, or at least that is my theory. 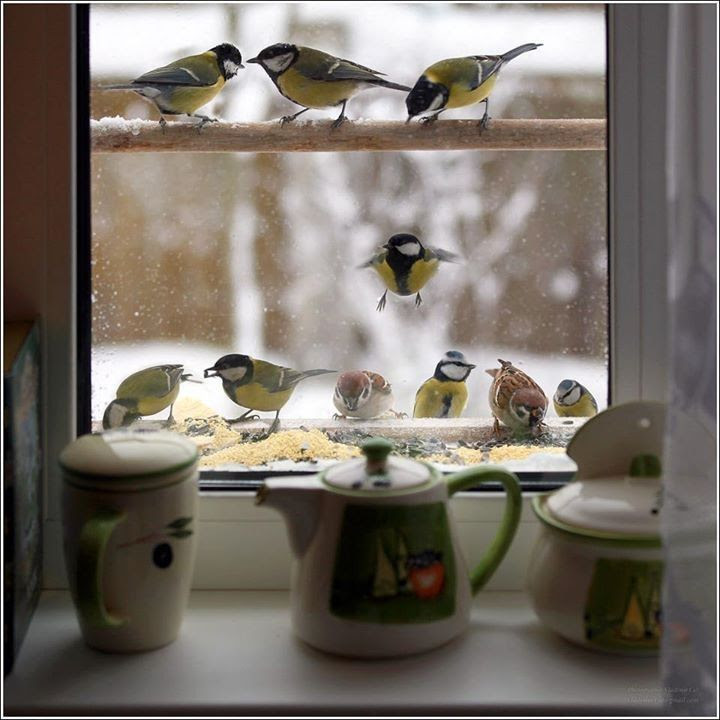 A long thin cylinder is kept filled with finch seed for the pair of Gold Finches which frequent our garden. They are so beautiful . . . and always come in a pair. It may be several pairs . . . but we only ever see one pair at a time, and they all look the same to me. Not bright yellow as the American Gold Finches are . . . these are a bit larger than a sparrow and brown streaked with black and red banded wings, with a thin stripe of gold running across them and a bit of red on their brow, so really quite different.


There is a suet cage as well, which we keep filled with suet in the colder months. I sometimes make my own mixture which they seem to love . . . it has suet and peanut butter, chopped apple and seed in it. I make it into little flat cakes and freeze them, then pop one in every few days or so as the old one disappears. I also save my bacon fat and use that in it as well. We don't often have bacon though, so that is a rare treat . . . even for the birds.


We have another feeder which looks like a giant black pine cone. It hangs from a chain, it's petals unfurled and open with just enough space between each one to put some wild bird seed. I love to watch them at it . . . hopping here and there between the petals, wings fluttering, voices chirping. It swings a bit beneath their weight. You wouldn't think it would . . . but it does. They don't seem to mind. 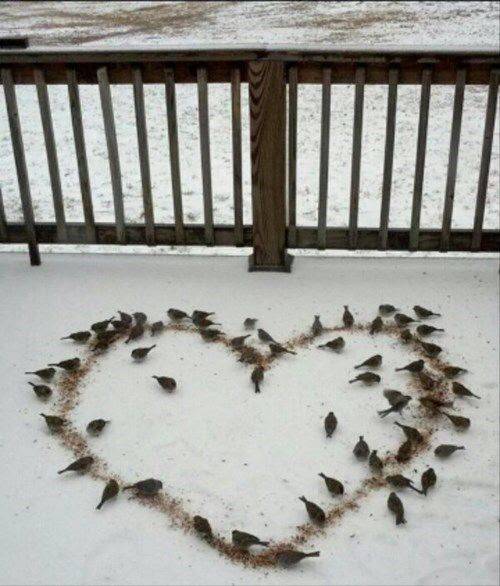 We have too . . . a little iron water dish, which I think quite pretty . . . and a tall fairy holding a dish amongst the rose bushes. She's pretty too . . . crumbs and crackers and bits and pieces go into her dish . . . water in the other, a fresh supply each day. It is work feeding them . . . but we don't mind.

Each morning as we fill the feeders and tables, we know that they will be empty again come the end of the day, and the work must begin again. It is truly a labor of love for us though as we do so love to sit and watch them from out dining room window which looks out across the back garden. We mostly get sparrows here . . . with the odd robin and black bird thrown in, and of course our resident wood pigeon and the pair of gold finches . . . 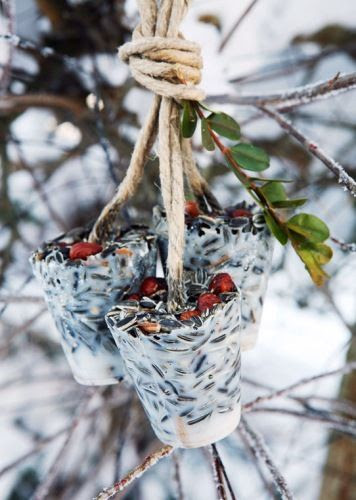 There are no jays, or woodpeckers, or nuthatches like we used to get down South. It is an urban environment and not wooded as such, but we don't mind. We seek our pleasure where we find it, and sparrows it is. As much work as it may be filling the feeders each day . . . we get rewarded for ten times over in the joy we experience in watching them feed, which only goes to prove a point . . . you get out of things what you are willing to put in . . .

This week they have an added treat of mealy worms. Yes . . . we were feeling a bit flush and thought why not.  It's Christmas.   I'm quite sure that we will be treated to a new dance or two for our efforts. ☺

It saddens me to see a bird in a cage . . . I am glad that ours are free to fly, to come and go as they please.

“The robin flew from his swinging spray of ivy on to the top of the wall
and he opened his beak and sang a loud, lovely trill, merely to show off.
Nothing in the world is quite as adorably lovely as a robin when he shows off -
and they are nearly always doing it.”
~Frances Hodgson Burnett, The Secret Garden 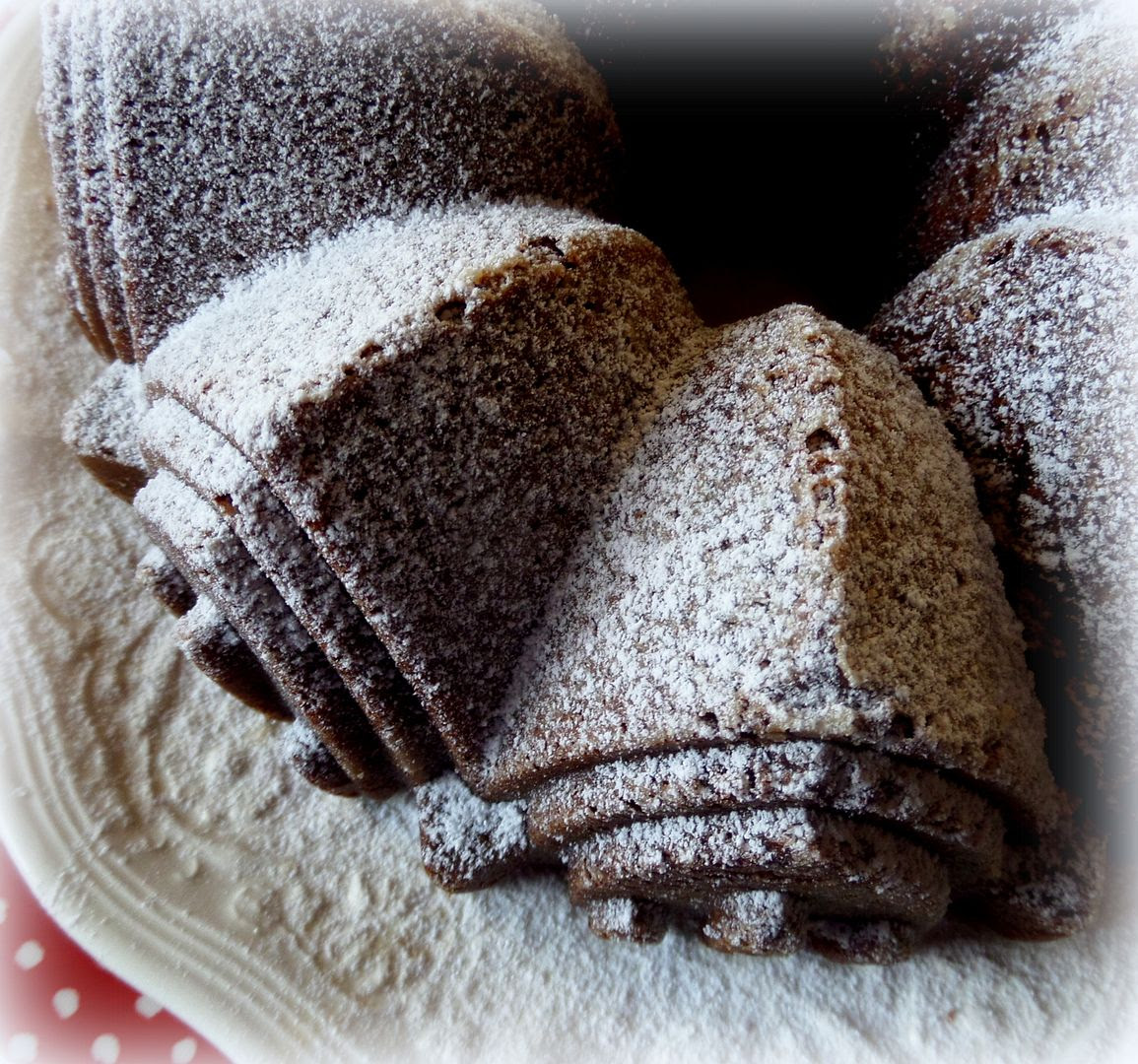 Baking in The English Kitchen today  . . .  Christmas Ginger Cake.  So good and it smells heavenly when it is baking.  It's worth it just to smell it!

Have a wonderful Wednesday!    I hope it is filled with countless blessings and oodles of joy.   May you be able to keep the world at bay . . .