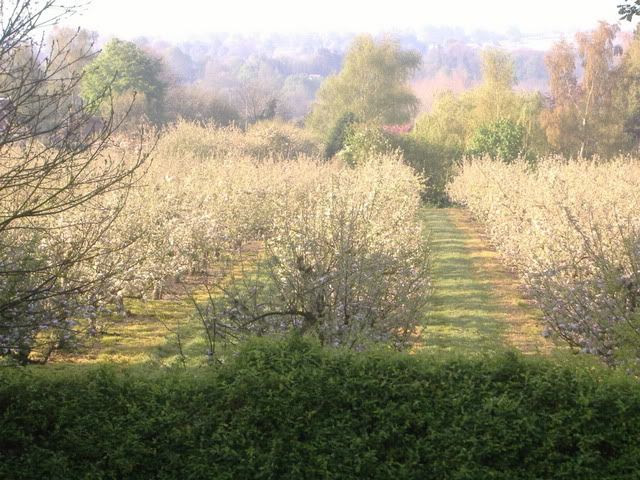 This was the view from our upstairs library window when we lived down south.   The orchard just past our hedge.  This was in the spring when the apple trees were coming into bloom.  Such a pretty sight.  Having spent a goodly portion of my life living in the beautiful Annapolis Valley of Nova Scotia, a primary apple growing area, I hold a special fondness in my heart for apple blossom and for apples.  Each year, about this time . . . they hold a special festival there, called "The Apple Blossom Festival."  Established in 1933, this weekend marks the 82nd Festival which has been held.

Early colonists from Europe introduced the sweet scent of apple blossoms to the Annapolis Valley as they brought seeds, grains, fruits and vegetables to the new land. A plaque on a reconstructed gristmill in Lequille, Annapolis County, notes the site as the first “farm”. From the 1600′s on, production of apples was an industry with both the Planters,  and later the Loyalists planting orchards up and down the Valley. In peak years, nearly 3 million barrels of apples were harvested so they were valuable crops indeed! The aroma of the blossoms in May and June, along with the natural beauty of the bloom, made the advent of spring even more of an occasion in the valley. Local boards of trade and community councils had talked of a spring carnival at blossom time but it was not until 1933 that the talk turned into action and the first Apple Blossom Festival was held.

The original objectives of the Festival were to make the Valley’s apple industry better known throughout North America and Europe; to publicize the scenic beauty of the area and the historic background of Longfellow’s Land of Evangeline; and to provide an opportunity to foster and develop local talent through participation in Festival events.    Each year a different valley town vies for the honor and  is picked to host the festivities with that town's mayor being the master of ceremonies.   The year my eldest son was born, my Doctor was the Mayor of the town which was hosting and my son picked Apple Blossom weekend (The day of the parade to be exact!) to be born!!  Most inconvenient for the Doctor! 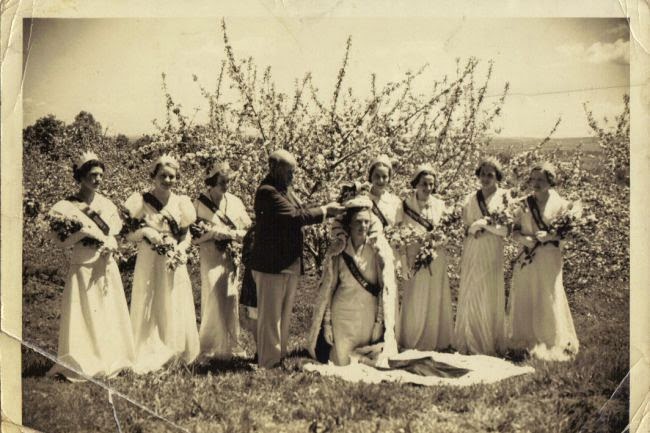 Each community in the valley picks a girl to represent them during the festival,  a "Princess."  There are "Teas" in the weeks running up to the Festival itself, with all of the princesses in attendance.   One of these young ladies will be crowned "Queen Annapolisa."  It's a really big deal.  They are considered to be the cream of the crop where "Valley"   girls are concerned.

Throughout the festival there are a variety of events such as Teas, Suppers, Games, etc.   The Queen is usually crowned at a ceremony on the Friday evening and  on the Saturday there has always been a grande parade, which thousands turn out to watch.  There used to be a formal ball on the Saturday evening, but I don't know if they still do that.  It was always a very elite and formal affair and people are just not that formal any more are they . . .  although I am sure there is still a dance of some sort. 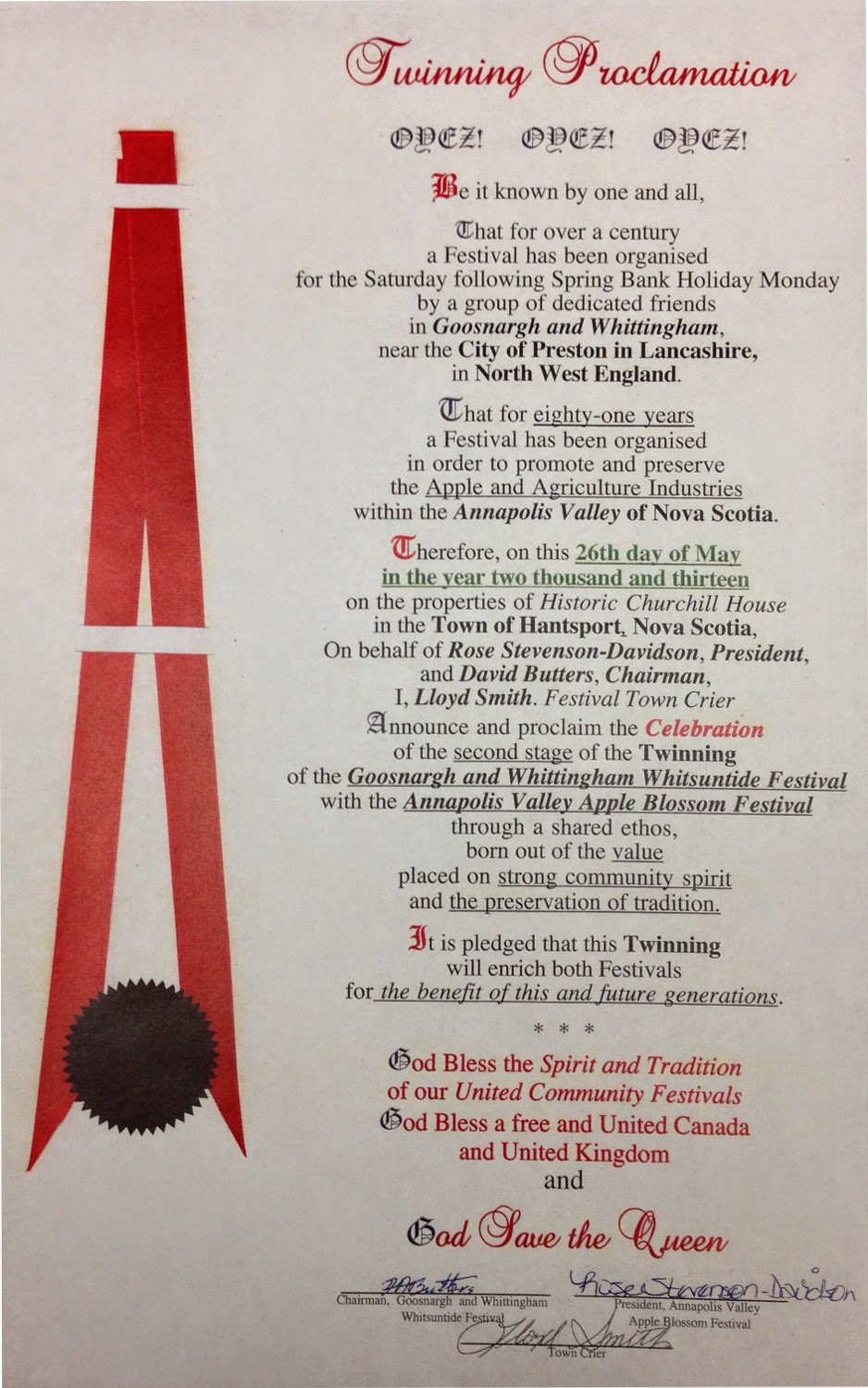 Last year the Festival was twinned with the Goosnargh and Whittingham Whitsuntide Festival.  Goosnargh is a village here  in the North West of England in the Preston, Lancashire parish.   I find that fascinating because Preston is one of the major historical points of where the Church of Jesus Christ of Latter Saints got started, and that is why a Temple was built in it's vicinity, called the Preston Temple, and where the Missionary Training Centre is here in the UK.  It's kind of nice to have a special link between my home here in the UK and my home back in Canada. 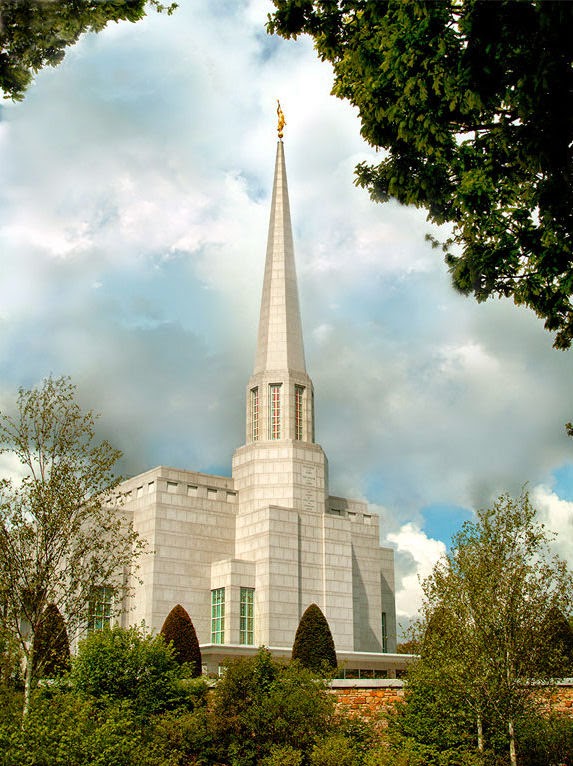 Todd and I were sealed in the Preston Temple for time and all eternity, so it holds a very special place in our hearts.  We love to go there as often as we can.

It's hard to believe that just a year ago I was getting ready to fly back to England from Nova Scotia, after my mother had had her operation and gone through all she went through.   It's amazing how much can change in a year.   Mom is still suffering the after effects of all of that, although thankfully no cancer remains or has come back.   She has short term memory loss still, and her toe is still healing and causes her a great deal of discomfort at times.   The VON are still coming in several times a week to care for it.  Her Doctor says were she a much younger woman, all would be well by now.  It takes much longer for things to heal as you get older.

And too, it's been almost a year since my sister and her partner moved to Nova Scotia to care for my mom.  Now they have my dad there as well, which is a blessing for us all.  I am truly grateful for all that they do for my parents.  I know it's not been easy for them.  They still have not been able to find full time work and their unemployment benefits will be running out soon.   Please pray that something will come up for at least my sister's partner soon.  Thanks! 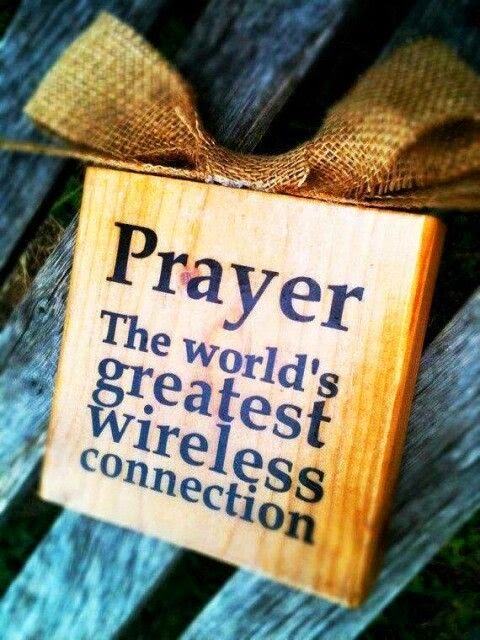 My friend Suzan is having a difficult time at the moment.  She has been the primary care giver for her mother and father these past number of years and it has come to the point where her father, who has Alzheimers disease (hope I spelt that correctly), is needing to go into a home.  It's a very sad occasion for them all.  As you can imagine a lot of red tape goes along with this process and they have run into a few snags.  Could you please pray for Suzan and her family at this time, that everything will be sorted before it needs to be and that this process will run smoothly for them all and they will have the strength to get through it all.  Thank you so very much!

I have babbled on long enough this morning, so I will leave you with a thought for today . . . 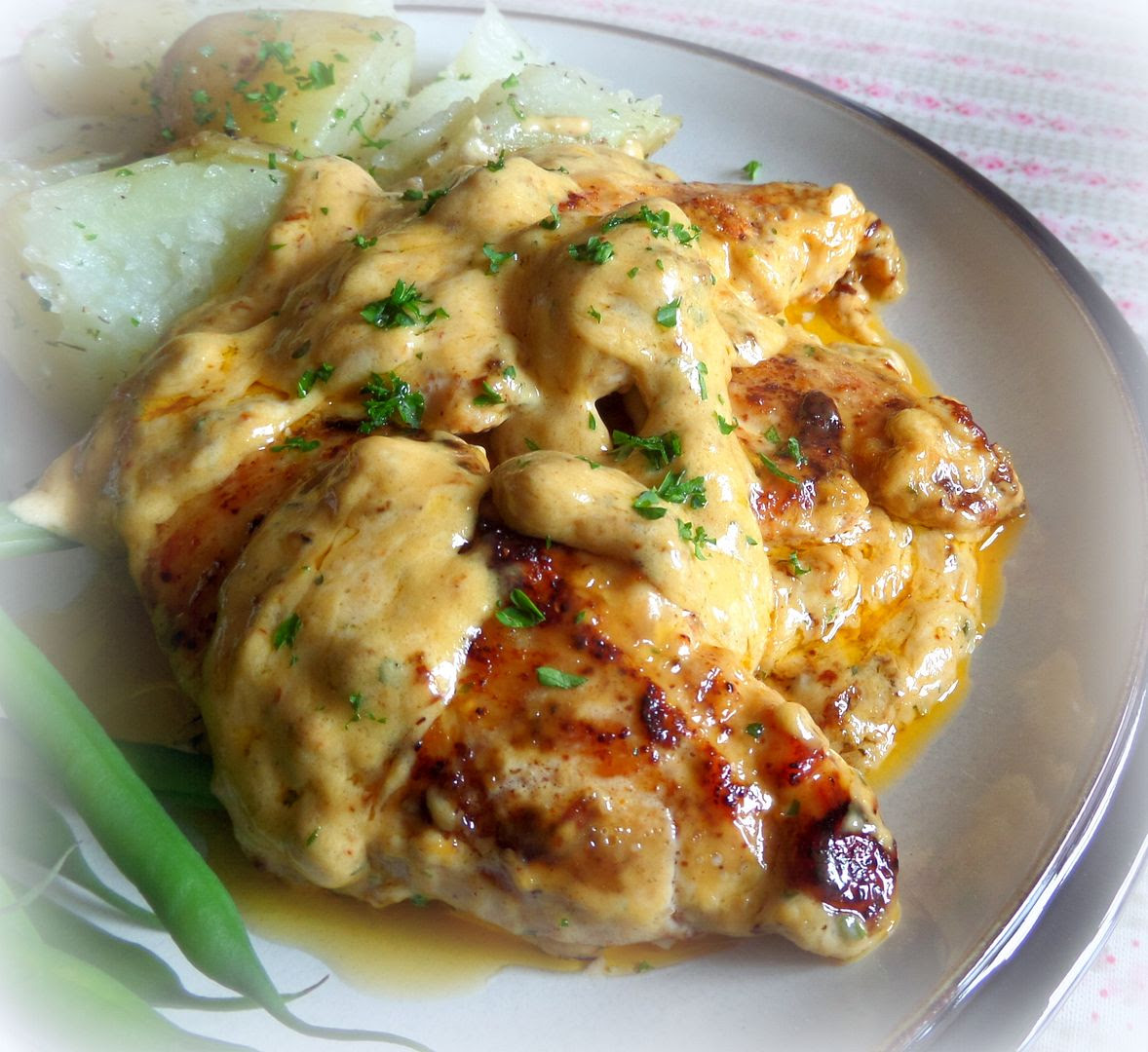 Cooking in The English Kitchen today  . . . .  deliciously simple Chicken Lazone.  We loved this. It was easy to make and fabulously tasty!  Quick too!

Have a wonderful Wednesday!  Don't do anything I wouldn't do!