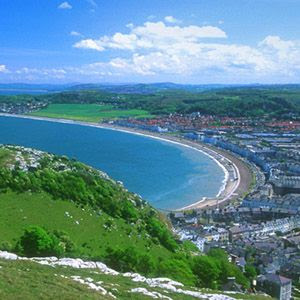 (View of Llandudno from the top of the Great Ormes)

Louder than gulls the little children scream
Whom fathers haul into the jovial foam;
But others fearlessly rush in, breast high,
Laughing the salty water from their mouthes--
Heroes of the nursery.

We had a fantastic day in Llandudno yesterday! (It is pronounced Clan-did-no)Llandudno is Wale's largest beach resort, uniquely situated between the Great and Little Ormes with two wonderful beaches, the award winning North Shore and the quiet, sand duned West Shore. It is an easy one hour drive from where we are living and I found it to be quite beautiful and not at all garish, as some seasides have a tendancy to be! 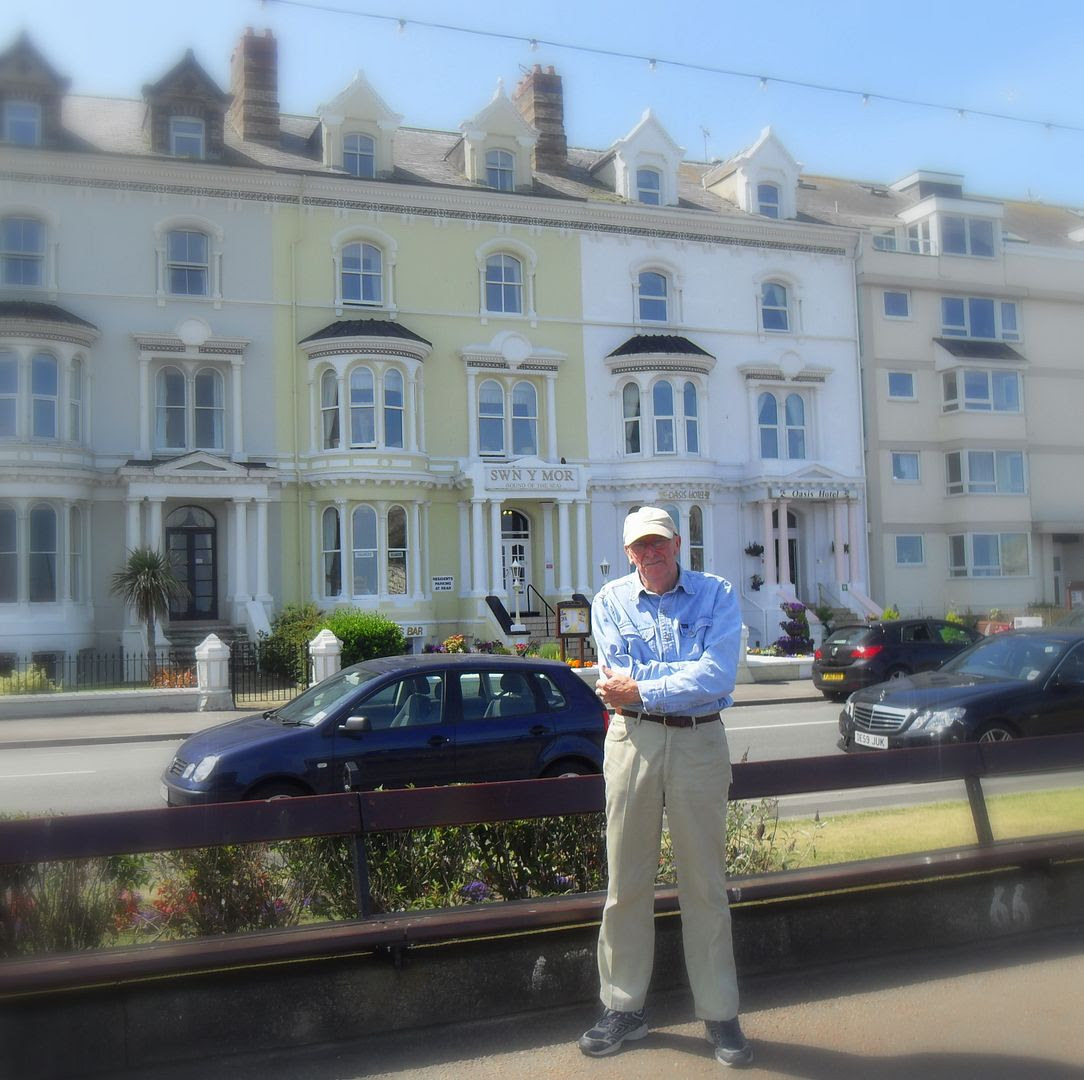 (Todd posing in front of some of the old Victorian and
Edwardian Hotels situated along the seafront.)

Llandudno has kept its Victorian and Edwardian elegance and splendour, despite its modern attractions. There are cable cars which enable everyone to be able to reach the summet of the Great Ormes. We didn't go on them yesterday but we did enjoy watching them go up and down. 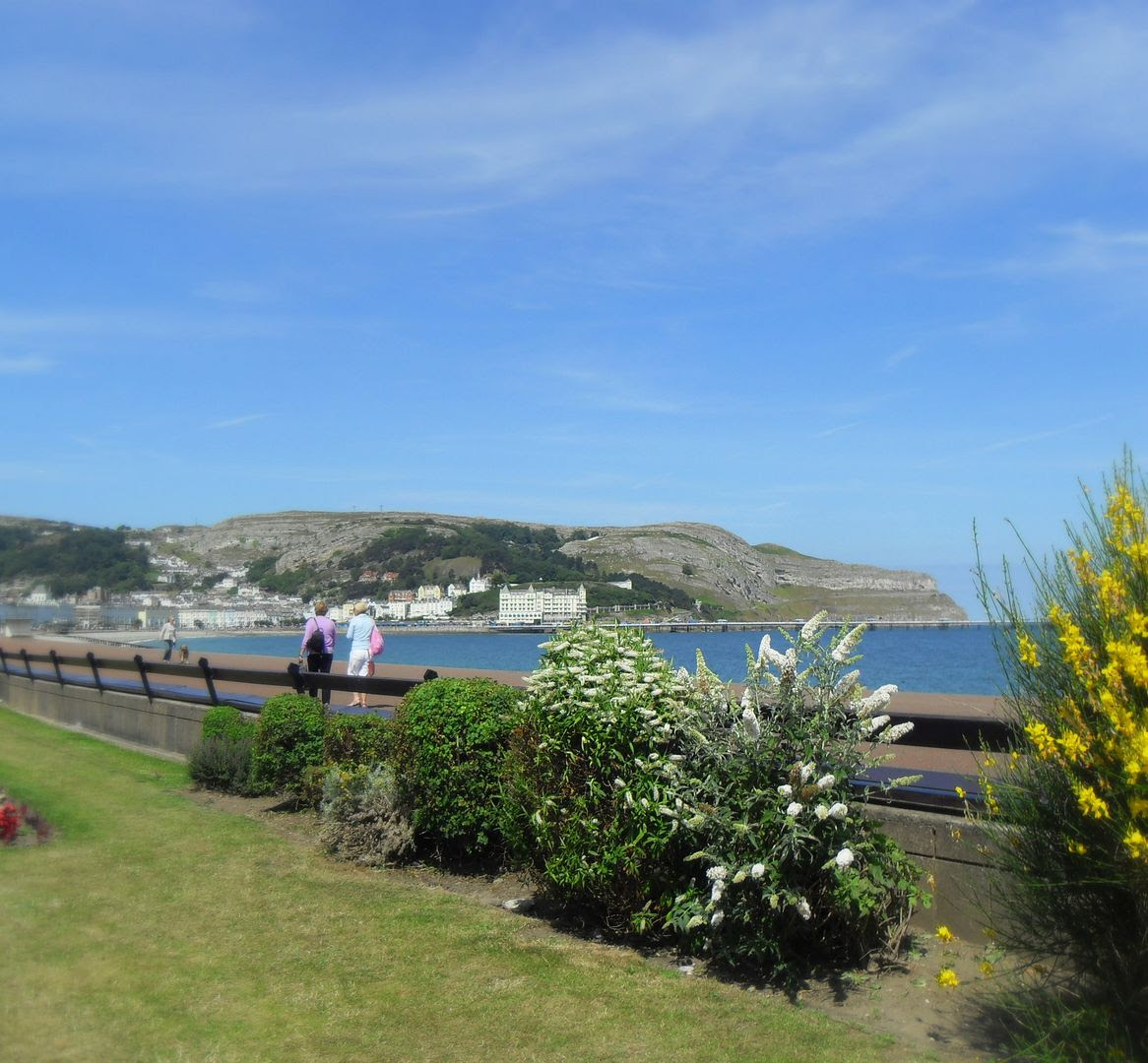 (A view of the Great Ormes as we walked towards it and the Pier.)

There are ornamental gardens, a beautiful seaside facade of Victorian and Edwardian hotels, beautiful flowers lining the lamp-lit promenade which stretches for quite a distance, a lovely sandy beach and a great amusement pier which has just about something for everyone! 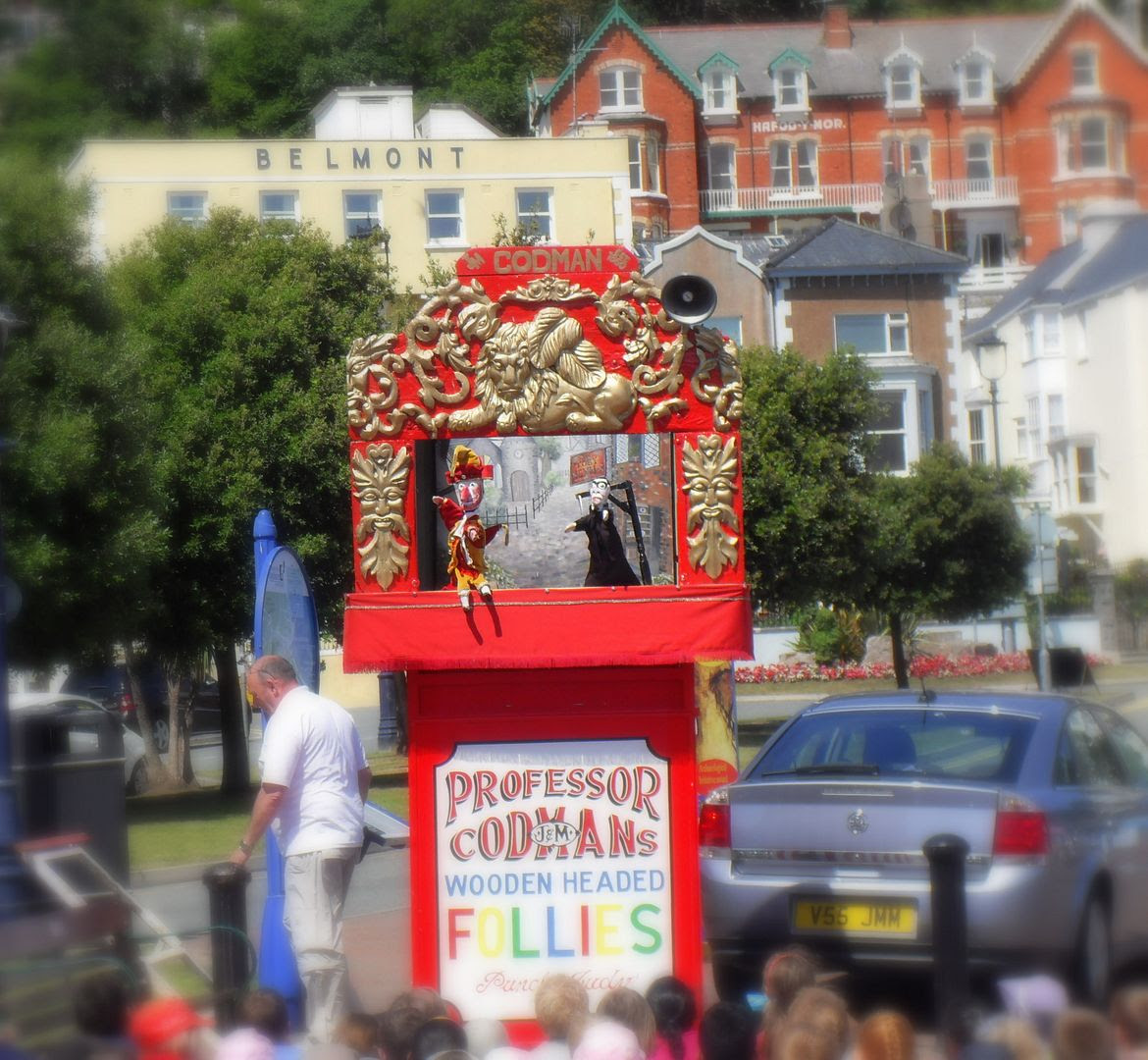 The seafront was filled with groups of children yesterday, I am assuming on their last week of school seaside trips, and a lovely Punch and Judy show was playing on the Promenade. 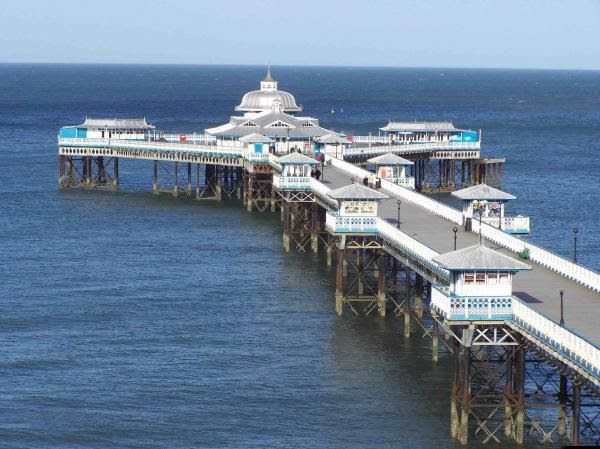 There was fish and chips . . . and ice creams and the lovely sound of gulls and waves crashing against the shore. The smell . . . sea air is so invigorating don't you think? The sounds . . . happy people in a holiday mood, children, gulls, waves . . . it all added to a beautiful atmosphere. We had a decidedly lovely time, and I know Doreen and Billy did too. 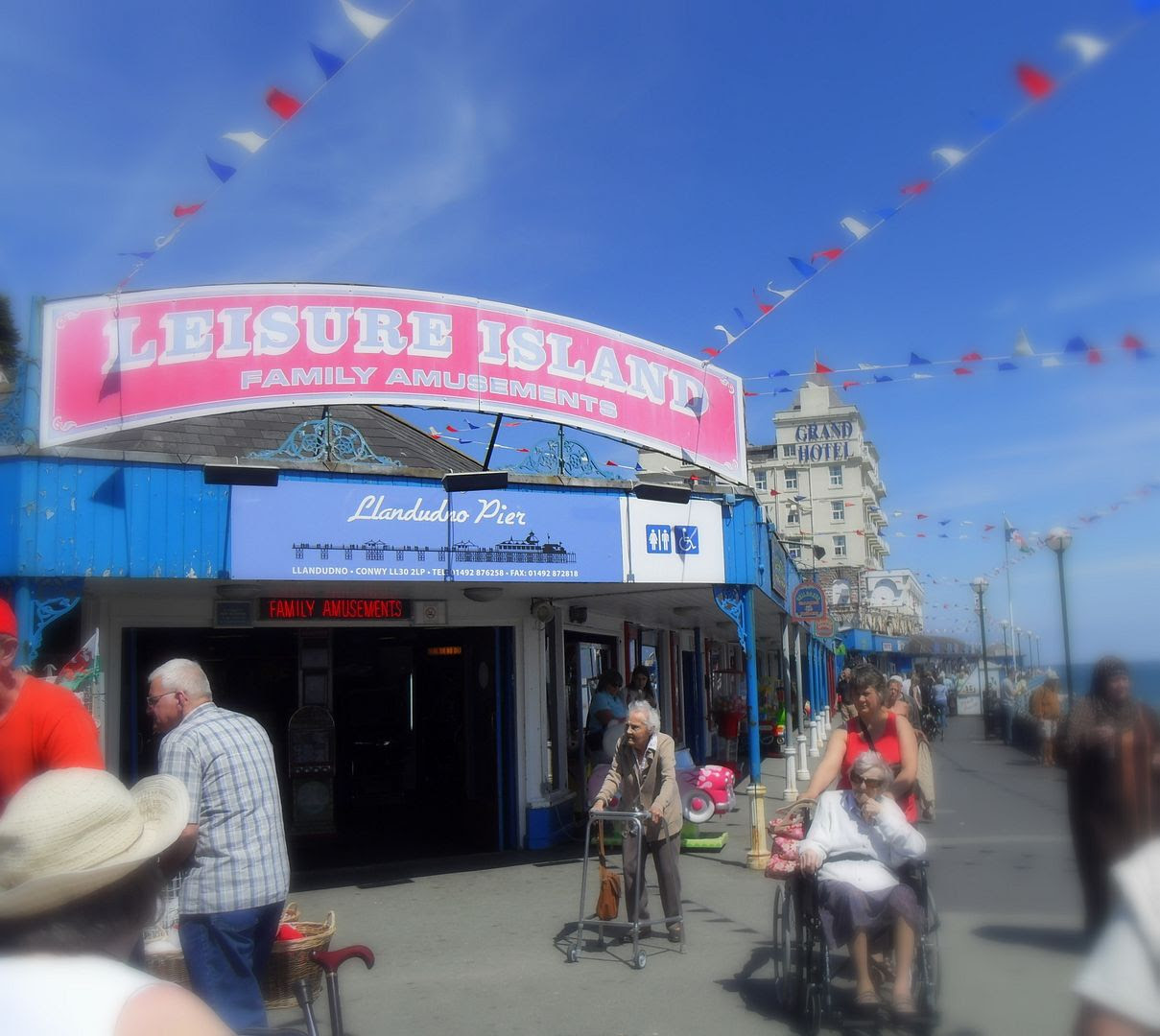 (Where the amusements begin on the Pier.)

We walked for miles and miles (it seemed) and it was not until the very end that my hip started to protest! That last bit of walking back to the car was a bit difficult, but I got there in the end. 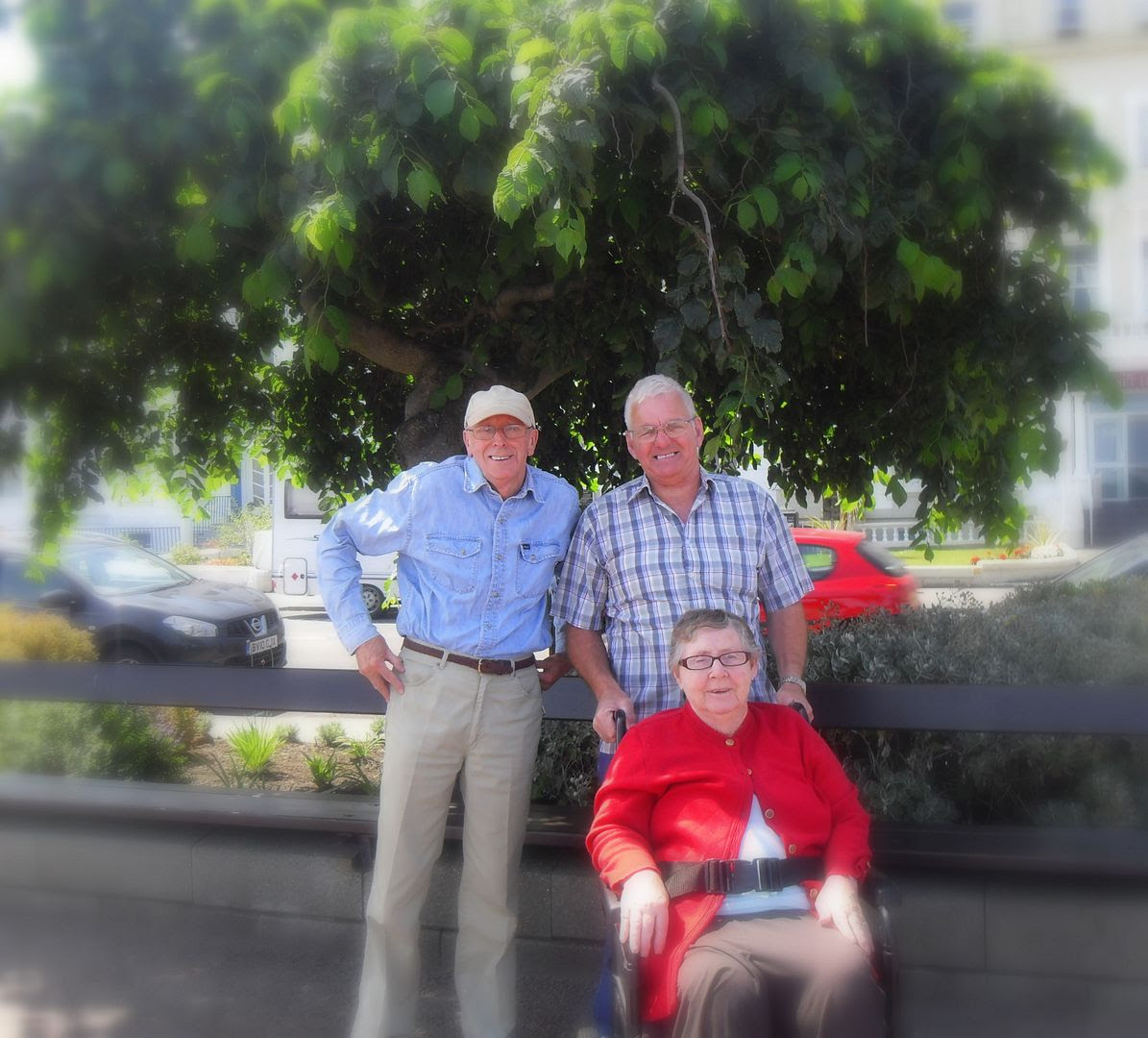 The best part of the day though was getting to share it with some good friends. Todd has been friends with Doreen and Billy for years and they were some of the first friends I made when I moved over here. Doreen used to live right next door to Todd and Billy is her caregiver. Nobody could take as good a care of Doreen as Billy does. He is just like a son to her! Lovely people. 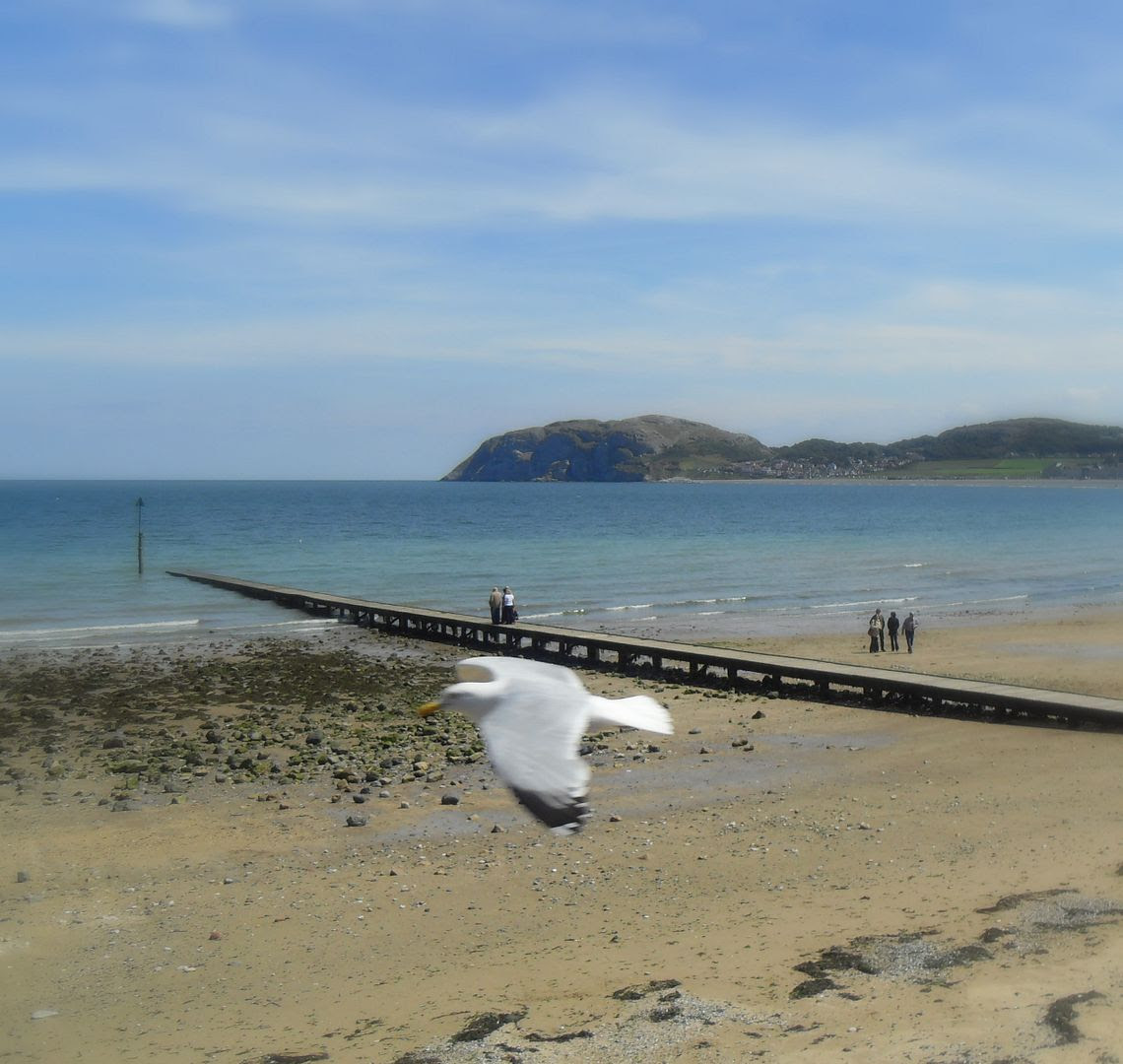 (View across to the smaller Ormes. Look at the gull getting into the picture!)

It was so nice to be able to bring them along with us, and I know they really enjoyed themselves as much as we did. I think experiences are always alot nicer when they are shared, don't you? 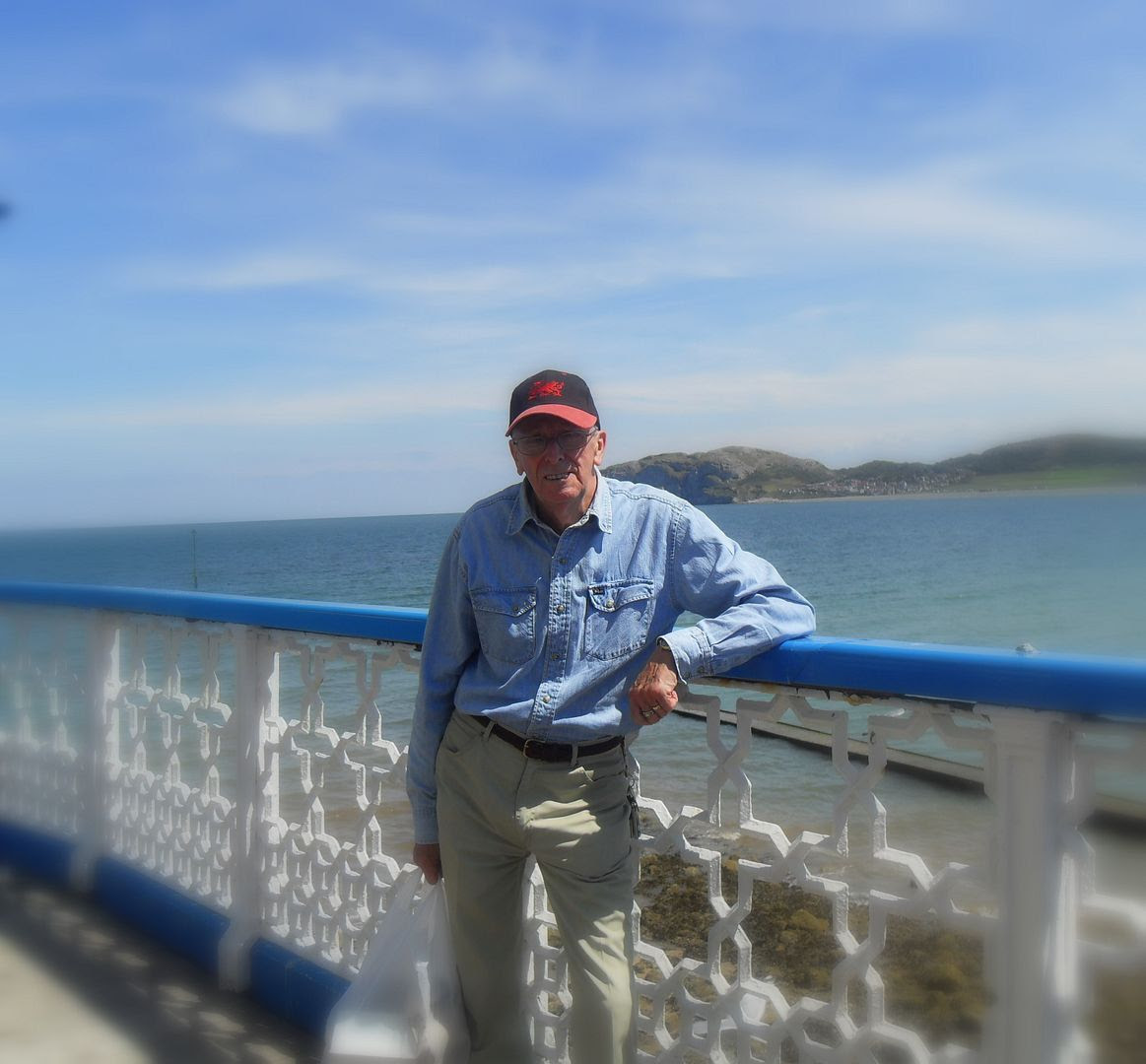 We had a great day together, and Todd and I have vowed to go back sometime when we can stay overnight, and maybe bring Mitzie along with us. I can imagine how beautiful it is at dusk with all those beautiful Victorian Lamp-posts lit and the string lights . . . and the pier all lit up. It looks like there are lots of musical activities in the evenings with choirs and such and it would be just lovely to be able to listen to some.

My dishwasher should come today! I am excited about that and hoping that it won't be too long before I can have it plumbed in and be using it. We are having the missionaries over for supper tonight and it would have been nice to be able to use it tonight, but I don't think that is going to happen! I picked up some lovely bangers at the butchers yesterday so we'll be having bangers and mash for tea, Todd's favourite meal and I just might make this pie I am showing you here today. It all depends on if I have all the ingredients for it or not. I think I have most of them at any rate. It's probably enormously calorific, but the lads won't mind at all, and I can treat myself to a tiny sliver I think! Or maybe just a small bite!!! 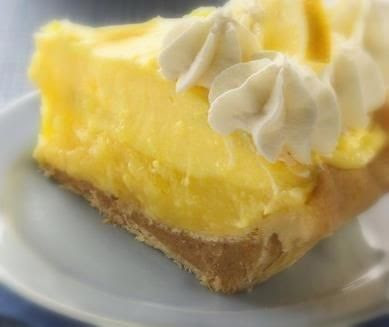 I have not made this, but it is on my list of to do's. I found it on the Pillsbury site and it looks fabulous!

For the crust:
1 box of prepared pie crusts, softened as directed on the box,
or your own favourite recipe for a double crust pie
1 (7 ounce) package of almond paste
1/4 cup toasted flaked almonds
1/4 cup granulated sugar

Preheat the oven to 180*C/350*F/ gas mark 4. Unroll 1 pie crust and place in an ungreased 9-inch pie plate. Press firmly against side and bottom. Crumble the almond paste into the bowl of a food processor and add the almonds and 1/4 cup granulated sugar. Cover and process for 1 minute. Spread the mixture in the crust lined pie plate. Top with second crust, pressing down. Crimp the edges together. Prick crust several times with fork, and then bake for about 30 minutes or until golden brown.

Mix 1 1/2 cups granulated sugar, the cornstarch and salt with wire whisk in a medium saucepan. Beat in the cold water and lemon juice. Add the egg yolks, beating until smooth. Add the butter and then gradually stir in the boiling water. Heat to boiling over medium heat, stirring constantly. Boil for 2 minutes. Remove from the heat and add the lemon extract, lemon peel and food color. Cover the surface of the pudding with plastic wrap. Cool for 30 minutes. Pour into baked crust. Refrigerate for 30 minutes.

In a small bowl, beat 1 cup icing sugar and the cream cheese with an electric mixer on medium speed until smooth. Beat in the milk until well blended. Add the pudding mixes and beat 2 minutes longer or until thickened. Pour over the first layer of pie filling.

In a medium bowl, beat the garnish ingredients with electric mixer on high speed for about 2 minutes, or until stiff peaks form. Place this mixture into a decorating bag fitted with star tip. Decorate the top of the pie as desired. Cover and refrigerate any remaining pie.

Note: This was a winning pie from the Pillsbury Refrigerated Pie Crust Championship in 2007. This recipe was submitted by Whitney Haynes of Middleton, first place winner of the Topsfield Fair (MA). 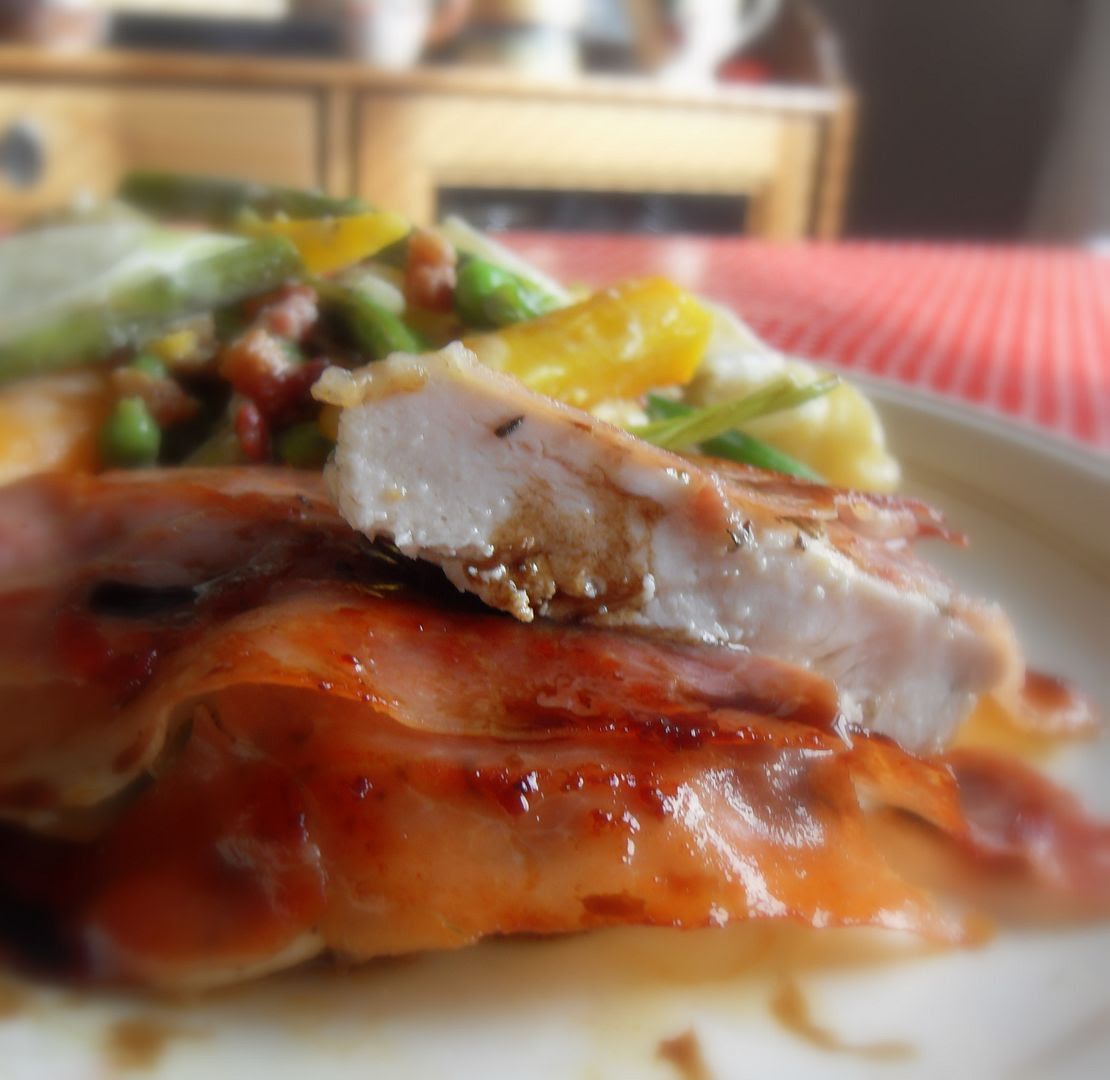