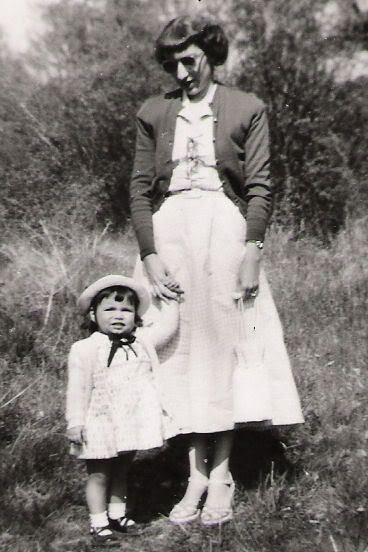 When I was a child . . . lying was not something that I could ever get away with. My mother had a mind like steel trap and eyes in the back of her head, or so it seemed to us children at any rate! There was nothing she didn't see and nothing that we could do that she didn't somehow know about. She would have been an excellent CIA operative . . .

Did you kids eat those cookies in the cookie jar??? NO, we'd mumble as the telltale sign of chocolate crumbs fell from our lips like the downy first season's flakes of snow . . . Who spilled my perfume??? Must have been the cat mom . . . the stink of Ma Griffe wafting around our not so innocent heads . . . simple lies . . . harmless and innocent, or are they? 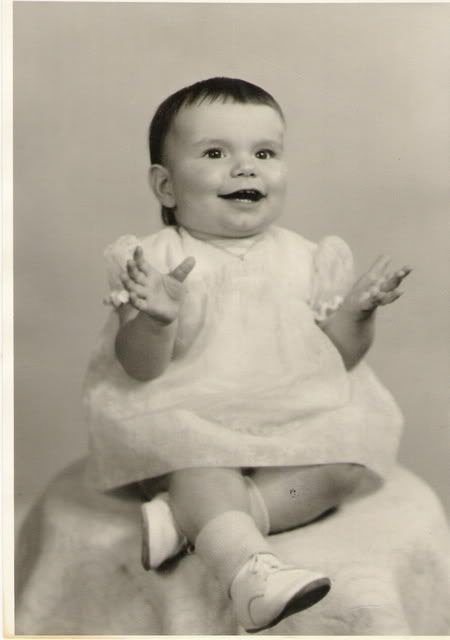 I remember one lie in particular, that, while innocently told, had rather dire consequences for my sister, and for myself . . . and that I still feel guilty over, even today. My father was somewhat of a musician in his spare time, playing the clarinet in the Station Band as well as the trumpet and saxophone. One day my father brought home a beautiful pair of Mexican maracas, which he lay on top of his dresser in my parent's bedroom, along with a pair of castinets. Oh how excotic they looked to my childish eyes. They were bright red with green handles and had pretty little dancing women painted around their fat middles. Oh how tempting they were . . . their beautiful red paint singing out to me like a mermaids song to an ancient mariner.

I was somewhat of a budding musician myself and my hands just itched to touch them . . . to shake them just once and hear the exotic sound that they would make. I had been told several times not to touch them, but being a small child and full of curiosity, one day . . . when my father was at work and my mother was occupied with my baby brother, I could not resist the temptation and I tiptoed into my parent's bedroom. This was a forbidden spot to us as well. We were never allowed in my parent's bedroom unless invited to enter. I tiptoed into the room and reached up on tipie toes to the top of the dresser . . . they felt smooth and cool beneath my fingertips. Suddenly just touching them was not enough . . . I had to hold them. My tiny fingers rolled and curled around the smooth, hard wooden handles and I picked them up. At first only a tiny shake . . . and then a few more, rapid shakes . . . oh the joy! Oh the pleasure! Shake . . . Shake . . . Shake . . . I dropped one. In all the excitement of holding these red beauties at last, my fingers had turned to butter and I dropped one. It lay at my feet . . . it's pretty wooden handle twisted slightly askew, leaving a gaping hole in the bottom of what . . . just a few minutes before had contained all the allure of Pandora's box . . . but, like Pandora's box . . . had ensnared me and now my sin was laying there on the floor by my feet, for all the world to see. 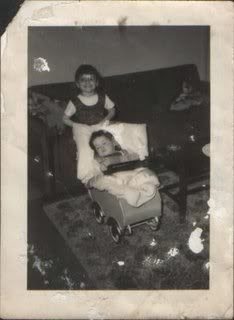 Oh what could I do . . . what could I do??? I fought back tears and quickly replaced the guilty pleasures back on top of my father's dresser as quietly as I could, thinking that perhaps, if I didn't say anything he would not notice.

The rest of the day I lived in the agony and fear of discovery. My usual enthusiasm when my father came home from work that day must have seemed quite stilted and subdued and I am sure I must have seemed unusually subdued that whole evening to both of my parents. As a parent myself, I am sure that they knew somethiing was up. The telltale signs of childhood guilt were probably wafting about my head like the smoke from a fire.

After dinner, when my father went into his bedroom for something, he noticed the offending articles immediately. My whole life must have passed in front of my eyes when his words rang out, "Who broke my maracas?" I didn't want to do it . . . but I couldn't help myself, my very reason being clouded with fear. Before I could stop myself, my small voice was ringing out that my sister had done it. I had seen her . . . 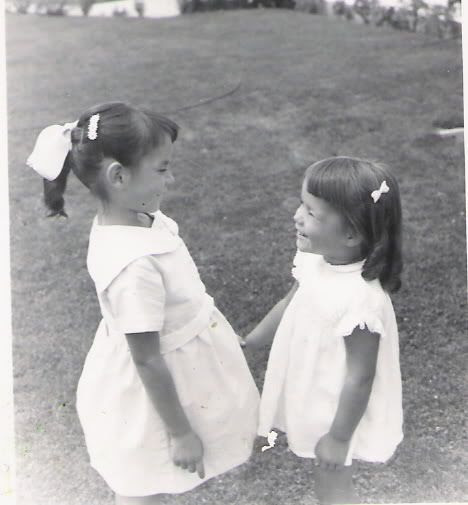 Oh the shame . . . oh the betrayal . . . I felt like the worst person that had ever lived . . . but I also thought that, as she was so much younger than myself, the consequences to her would not be as great as they would be to me.

Like a fly caught in the intricacies of a spider's web my lie wove a trap tightly around me. There was no escape. I re-itereated again and again that she had done it . . . she insisting tearfully all the while that she hadn't. It was glaringly apparent that she could not have done it . . . and my mother and father both knew it, my sister was far too small to have reached the top of the dresser, even on the uppermost tip of her toes. They sent us to our room to think about it. 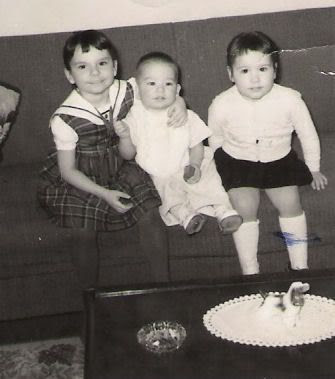 Someone was going to get a spanking. We both knew it. I am not sure how I did it, but I somehow managed to get my sister to agree that she would confess that she had done it. Perhaps it was the reassurance that if she put a book inside her pants that the spanking would not hurt. (Something we had both seen in a cartoon) She trusted me implicitly, and when the interrogation began again, she caved in and said that yes . . . she had done it.

Oh, the guilt I felt was increasing with every minute that passed. I was surely going to burn in the firey pit of hell with this one.

There was nothing left for my father to do . . . the confession having been told. My mouth was sealed. After having told the lie, I was bound to uphold it and fighting back tears, I watched him put my little sister over his knee and spank her. Her small cries penetrating my soul like a bullet piercing the flesh. The book idea?? Total crapola!! Instead of making it painless, I think it had made it worse. I had to confess, no longer being able to live with the deceit. My sorrow at having lied, compounded with the fact that I had willingly let someone I loved take both the fall and the punishment . . . 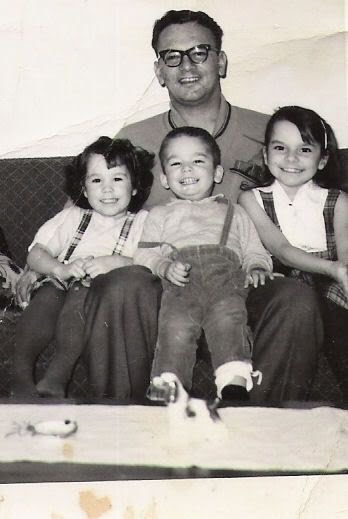 I learned two important lessons on that day. First . . . there is no lie that does not get found out. The truth always comes to the surface in one way or the other. Every action always has a consequence. Secondly that there is no worse feeling on earth than that of letting some else take the blame for something which you have done . . . or the feeling of knowing that you have done something wrong and waiting for it to be found out . . .

Many years have passed since then and my sister has since forgiven me. I have since forgiven my self, which is the hardest thing to do, don't you think? But I doubt that either of us have forgotten the lessons learned on that day. To this day I cannot tell a lie. To this day I do not want to tell a lie. It is just not worth the consequences and the shame of discovery, or the way that it feels to know that I am being deceitful . . .

"To every man there opens a high way and a low
and every man decides for himself that way which he will go."

Here is something that is quite simple and delicious. We have packed most of our dishes and cookware away. Today we start on the larder, so cooking is going to become simpler and simpler in the coming days I fear. Let's hope I can still keep it exciting and interesting! 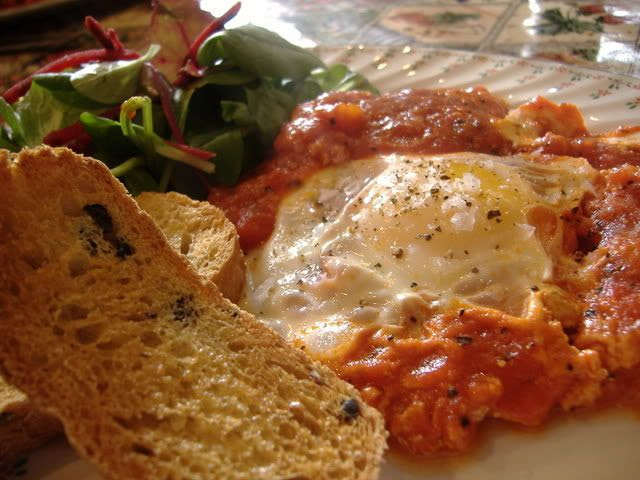 This is really wonderful. Simple, economical and full of delicious flavours. Proof positive that tasty doesn't have to be complicated!

Heat a nonstick frying pan over medium heat until hot. Pour in the olive oil and heat just until it starts to shimmer. Add the garlic and saute just until it becomes quite fragrant. Tip in the tinned tomatoes. Season to taste with some salt and pepper and throw in the basil leaves. Turn to low and allow to simmer for a few minutes until the flavours have melded and the tomatoes have reduced a bit.

Break the eggs into the pan, amongst the tomatoes, leaving some space between them. Cook just until the whites begin to set, then pop a cover on, and finish cooking until all are cooked to your liking. We like them so that the yolks are a bit runny. Season to taste with a little sea salt and cracked black pepper. Serve with toasted bread fingers for dipping. (The ones in the photo are grilled slices of a stoned olive ciabatta. Yummo!!) 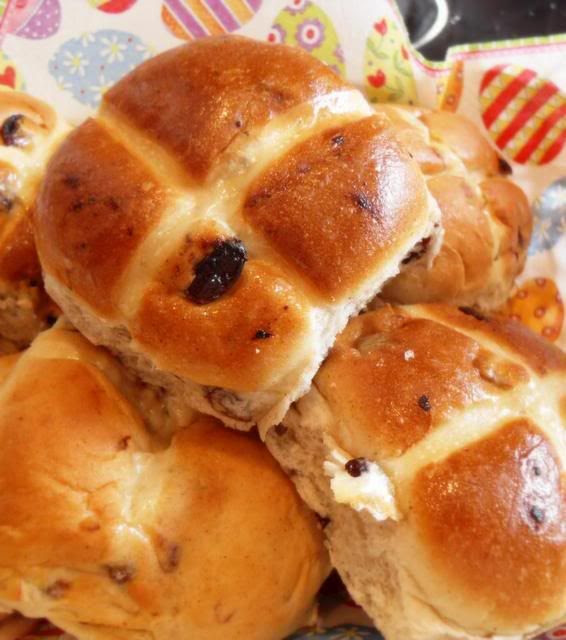 Over on The English Kitchen today, delicious Hot Cross Buns!