A Humble Existance is a Happy One 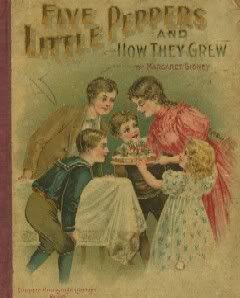 One of my favourite books to read when I was a girl, was a book called “The Five Little Peppers and How They Grew.” It was written by a woman named Margaret Sidney in 1880. It was about a family of five children who lived in very humble circumstances with their widowed mother, whom they called Mamsie. Oh, how I loved to read about their adventures in their little brown house. They were quite poor, and the oldest two children, Ben and Polly, and their dear mother, worked constantly to help keep the wolf at bay from the door, but they did it with a wonderful air of gaiety and strength of spirit that seemed to be so very marvellous to me. They had lovely names like Polly and Ben, Phronsie, Joel and Davie, and I have only now just realized that the book I had was only the first of a whole series of books. Oh, how I would love to read the rest of them and I think that I will, if I can find them.

I remember reading about them baking a cake for their mother one day. She worked so very hard doing mending and ironing for others and they wanted to do something special for her. They made a simple cake of brown flour with cinnamon for it’s flavouring, with a few sticky raisins tucked inside, the “receet” for it written out on a scrap of brown paper. It sounded so good to me. I wanted to bake a cake for my mother too, but, alas, my mother didn’t allow us in the kitchen to bake with her. I was allowed to sit and watch, but she was not one who wanted anyone messing about with her cooking or getting in her way.

They had a provision room (doesn’t that sound nice) that was not much more than a tiny shed tacked on to the side of their house and was more often empty than full, but oh how lovely it seemed to me to have a whole room dedicated to nothing more than holding all the provisions they would need for cooking their meals in the little brown house. I expect that is why I love my larder so much now and I like to keep it full up, much to Todd’s consternation! It makes me feel good and secure to see all the packets, tins and glass jars all lined up on it’s shelves, and the potato bin below full up with potatoes, both white and sweet, and onions and squash. When you have a full larder, a delicious and decent meal is never very far away from the ends of your fingertips, and it is never much bother to whip something up to eat when unexpected company drops by.

Each chapter in the book began with a scripture taken from the Bible. That only added to the magic of the words written on it’s pages. I had been taught that the scriptures were valuable beyond measure and if the book was good enough to contain snippets of this gold, then it was valuable too. I truly did cherish it.

I suppose in reading it I learned some very valuable lessons. The lessons of thrift and making do, and finding joy in simple things and pleasures. 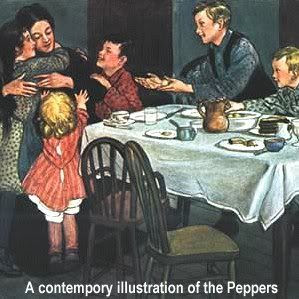 “Oh, I do wish," said Joel a few mornings after, pushing back his chair and looking discontentedly at his bowl of mush and molasses, "that we could ever have some - thing new besides this everlasting old breakfast! Why can't we, mammy?""Better be glad you've got that, Joe," said Mrs. Pepper, taking another cold potato, and sprinkling on a little salt. "Folks shouldn't complain so long as they've anything to eat."

Nothing ever sounded more delicious to me than mush and molasses or cold potatoes with salt, as I read these delightful stories filled with hope and dreams of ships coming in and better tomorrow’s ahead. 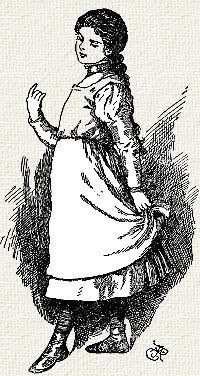 I wanted to be Polly . . . with her younger brothers and sister looking up to her in abject admiration . . . her very capable hands taking such very good care of them and of the house, in their mother‘s absence. She had such a good and cheerful heart, despite anything that life threw at them. She never got discouraged, and if she did, it was never for very long, as her gentle and strong spirit was always able to life her above her meagre circumstances. She was indeed the hub of that family wheel and it’s strength, the glue that helped to hold them all together.
I always wanted to be that glue, that strength. I suppose I was always a nurturer and a carer, and I still am. It really gives me such great joy to be doing for others and so I think I have ended up being a bit like Polly after all. I wait for my ship to come in as well, but in the meantime, I make the best with what I have been given and I am truly able to find joy in most circumstances. Perhaps that is the real treasure to be found in a happy life, being able to pluck joy from the ashes life deals you.

I had managed to keep this book right up until about 15 years ago. My ex husband was having a clear out one day and decided to give it away to a friend of his for her grand-daughters along with some other much loved books of mine. I was so dissappointed as I had been saving them so that I could one day give them to my own grand-daughters. Oh well, I shall just have to buy them new ones now! (That's if and when I ever have any grand-daughters!)

"They shall be abundantly satisfied with the fatness of Thy house; and Thou shalt make them drink of the river of Thy pleasures."~ Psalms 36:8

I love eggy bread, and I love chocolate. It seems only natural to combine the two. Todd doesn't mind chocolate this way as it is not cake. I'm afraid I'm a total North American when I eat this as I have to have syrup on top, but Todd . . . he eats his plain. 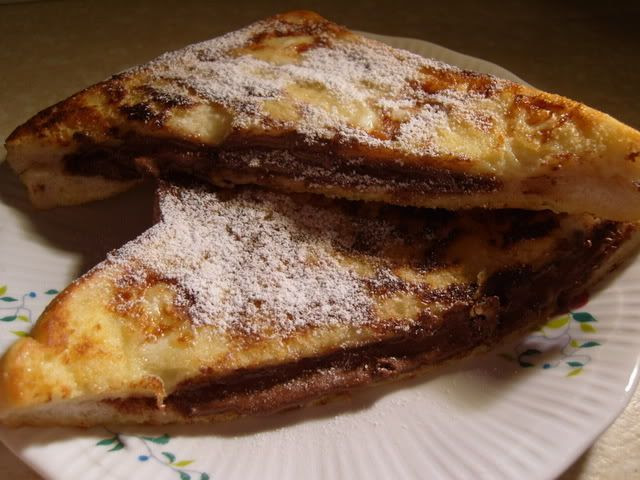 Whisk the egg, milk, caster sugar and salt together very well in a shallow pie dish. Heat a large skillet over medium heat and add the butter and allow to melt until it is foaming. (don’t have your pan too hot so that the butter burns)

Sprinkle each of four slices of the bread with the chopped chocolate and then cover them each with another slice of bread, pressing it down slightly. Carefully dip them, one sandwich at a time, into the egg mixture first on one side and then on the other. Once dipped place them into the melted butter and cook until golden brown on both sides, about 3 minutes on each.

Remove from the skillet, and place on a baking sheet in the oven to keep warm, and repeat with the others. You may need to use more butter. Serve warm and dusted with icing sugar.

I may be very late posting tommorrow as I have to work quite late tonight. But never fear, I'll be around at some point!