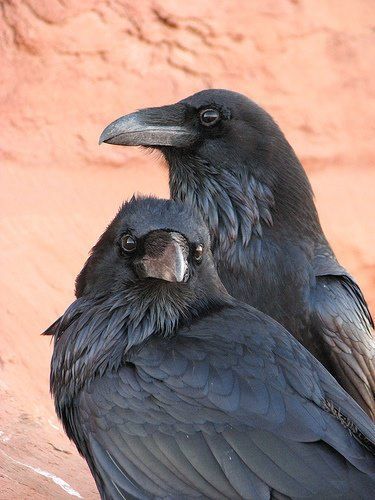 We had a lot of bread that needed getting rid of yesterday, well, not a lot, but some, and so Todd had put it out on the picnic table on the patio temporarily before moving it elsewhere and a big crow flew down and picked it up and flew off with it.  It sat on the roof of the shed first for quite a while, looking all over and watching the sparrows pick at it before it finally swooped down and grabbed it.  I have always been fascinated by crows.  They are really intelligent birds and you can easily tame them and I have also heard that you can teach them to talk.  When I was a girl there was a lad in the area who had two tamed crows and they used to chase me when I was riding my bicycle, swooping down on my and terrorizing me.  I am sure they thought it was a really fun game.  Not to me however.

They are quite sociable birds.   Did you know that they mate for life?  Tis true.  They also often live in small family groups and the older siblings will often help out their parents with the new chicks by bringing food to mom and dad, or even sometimes bringing food to the chicks. 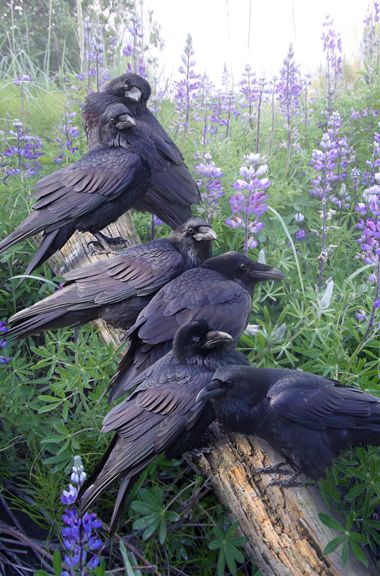 Did you know a group of crows is called a "Murder?"

One for sorrow,
Two for joy,
Three for a girl,
Four for a boy,
Five for silver,
Six for gold,
Seven for a secret,
Never to be told.
Eight for a wish,
Nine for a kiss,
Ten for a bird,
You must not miss

My mother often recited this when I was a child.  If she saw only one crow, she would eagerly scan the skies for another, seeing only one crow as being a dreadful omen . . . I find myself often doing the same.  Old habits die hard  . . . 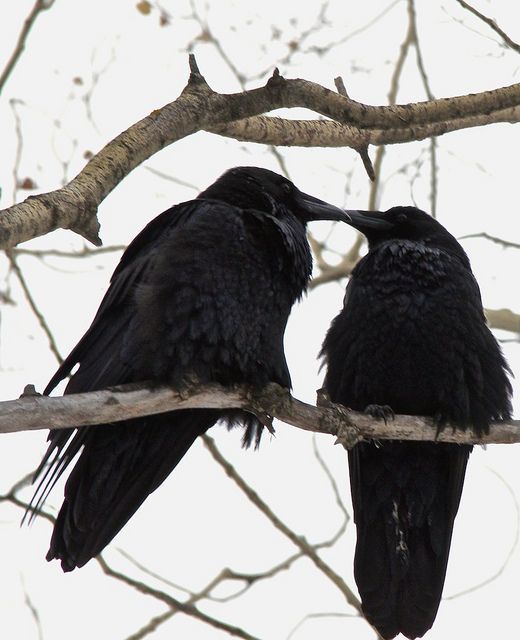 When one crow dies, they often get together, seemingly to throw a funeral of sorts. The sight of a dead crow appears to attract mobs of sometimes a hundred or more live crows. You won't see any of them touching the dead crow, which kind of rules out scavenging as a motive, but it is an interesting thing to witness.  There is a theory that they are congregating together like this as a part of a mass survival lesson, learning about threats.  They are often hesitant to revist a spot where one has died.  (I don't know who finds out these things!)

Proportionately, the brains of some crows are even larger than ours, earning them the nickname "Feathered Apes" by some zoologists. They are smart and good at improvising. Their brain is huge, accounting for some 2.7 % of their overall weight, whereas the human brain only accounts for 1.9 percent of our weight.  The term birdbrain does not apply to crows. 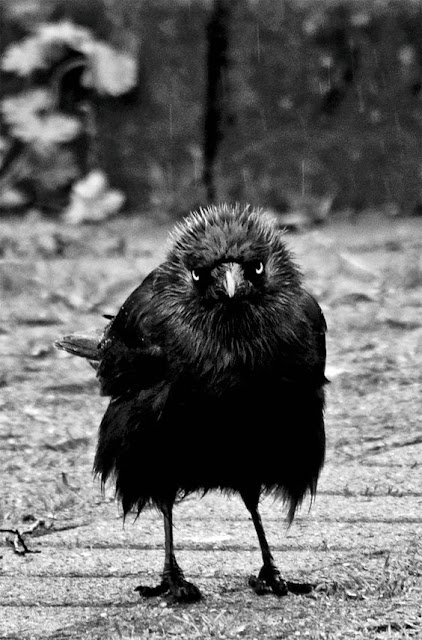 You don't want a crow for an enemy. Apparently they can recognize your face, and hold a grudge. In 2011, a team from the University of Washington published a remarkable study about the brainpower of local crows. The researchers' goal was to figure out how well the birds could identify human faces. So, in the name of science of course, they went out and bought two Halloween masks. One resembled a caveman, the other looked like Dick Cheney. It was decided that the caveman getup would be used to threaten the birds, while the Cheney mask was relegated to control status.

At the five sites, a scientist donned the caveman mask before catching and banding some wild crows. Getting trapped is never a fun experience, and upon their release, the ex-captives loudly "scolded" their assailant with a threatening caw. Seeing this, other birds who had been sitting nearby joined in the fray, swooping down to harass the neanderthalic visitor. Over a period of several years, both masks were regularly worn by team members on strolls through all five test spots. Without fail, the caveman mask was greeted by angry scolds and dive-bomb attacks from crows, including many who'd never been captured or banded, while the birds largely ignored the Dick Cheney mask.

Amazingly, the caveman disguise continued to provoke a hostile response five years into the experiment, even though the team had stopped trapping crows after those first few site visits. And some of the birds who antagonized the mask-wearer weren't even alive back when the whole thing started. The younger crows couldn't possibly have seen the imitation caveman grab an acquaintance of theirs, but they scolded it anyway. Clearly, the grudge had been passed on, Birds were still attacking the mask as recently as 2013.


Moral of the story?  Don't mess with a crow. They won't forget.
AND, they'll tell all their friends. 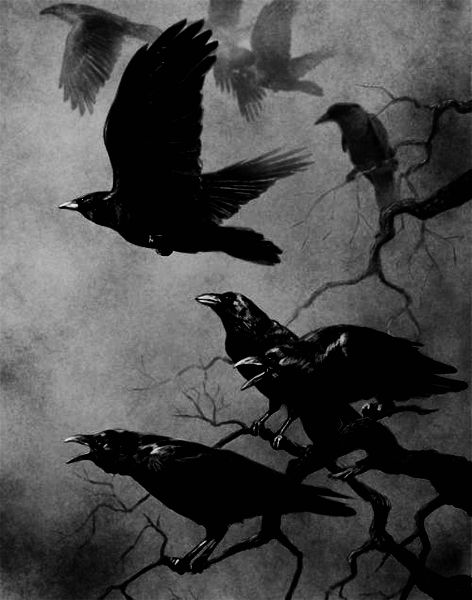 They tend to congregate "en masse" and chant at the end of a day.  I noticed this back home when I was living there back in the 1980's.  There was  a brook not far from where I lived, and around dusk every day the trees would be filled with crows, all talking and mumuring together. This happened day after day after day.  I have also read that crows have variable dialects or languages depending on where they are from.  Not sure how true that is, but it is a fascinating idea for sure. 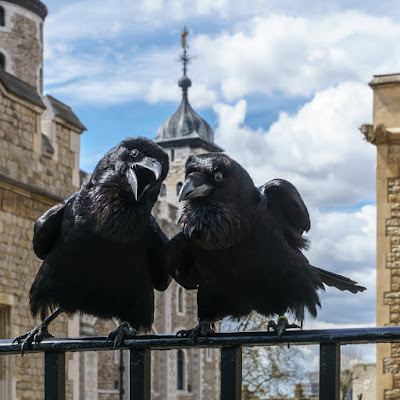 They have resident Ravens (a member of the crow family) at the Tower of London that every visitor is quite used to seeing around the grounds. I think they even have names. It is not known when the ravens first came to the Tower of London, but their presence there is surrounded by myth and legend. Unusually for birds of ill omen, the future of both Country and Kingdom relies upon their continued residence, for according to legend, at least six ravens must remain lest both Tower and Monarchy fall. I think they have a breeding and conservation program at the tower now as well.  I have also heard that they clip their feathers so that they can't leave, which I am not sure is a true fact or not, but if true would certainly tell you how supertitious their presence at the Tower really is!!

Its quite chilly here this morning.  I have put the heat on because I was freezing. Brrrr . . . I guess Winter's not quite ready to totally loosen her grip from us just yet!  Our pear tree is covered with loads of blossoms, but not the plum nor apple. Looks like we won't get much from them again this year.  We've tried everything, but with those it appears to be hit and miss, and mostly miss!!

I've been trying hard to get in as many Grey's Anatomy episodes before the end of April, which is when Prime is taking it off their "free" programs. I guess nothing good lasts forever.  I am part of the way into the fifth season.  I could sit and binge watch them for hours, crocheting while I do, but Todd balks at the thought so I can't watch as many as I would like.  Fair enough. He is really quite generous with our viewing habits.  Fact, he is watching Gilmore Girls with me for about the fourth time now.  LOL  Yes, he is a very amenable man! I cannot complain! 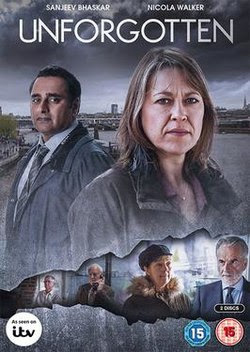 Another program we have really gotten into is "Unforgotten" on Netflix.  It's compelling, and last night we started watching the new documentary on there about Robert Kennedy. 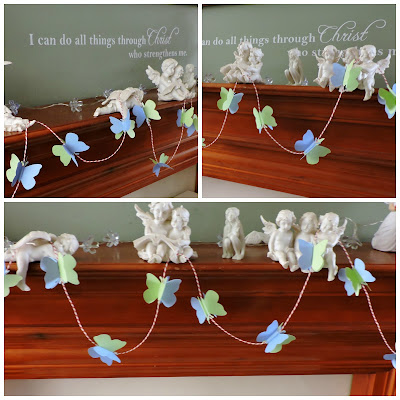 Look at what I made yesterday.  Its a paper butterfly bunting. 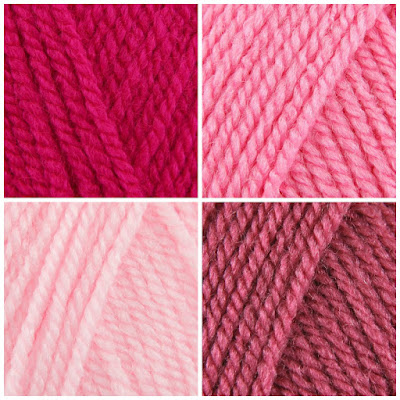 I ordered some yarn to make a baby blanket for Ariana and Jose. I am going to do the same as the others I have made, but using these colours (for a girl) plus white.  I quite like them!

And with that I will leave you with a thought for the day! 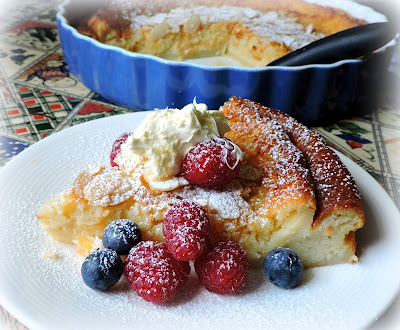 In the kitchen this morning . . . Magic Pie.  Served with fresh fruit and clotted cream.  Delicious!

Have a wonderful Saturday!  Be sure not to annoy any crows and don't forget!