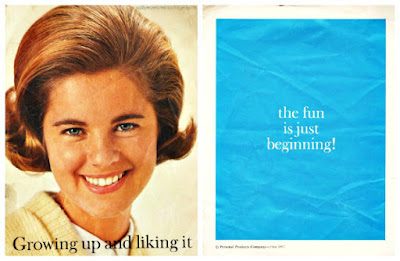 I was going through some of my old folders yesterday and look what I found!  I must have gotten this when I was ten years old, along with "the talk" and another pamplet . . . 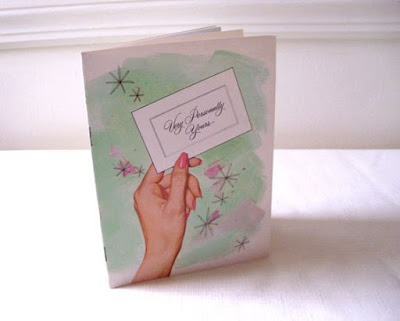 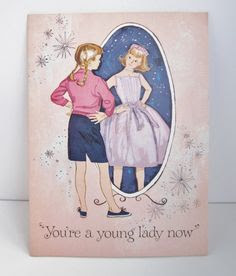 No actual details though, other than I was a young woman now and what would be happening to my body and what to wear and how to put it on. 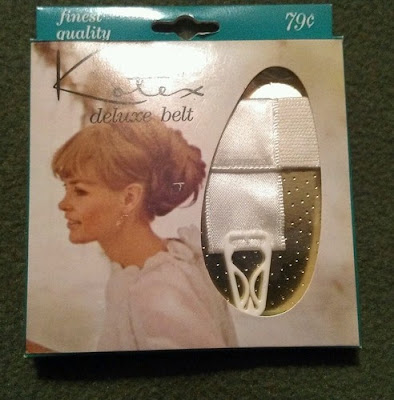 I'm quite sure they were invented by a man, because anyone who had to sit on a knot all day would never have invented something like this . . . comfort schmomfort. 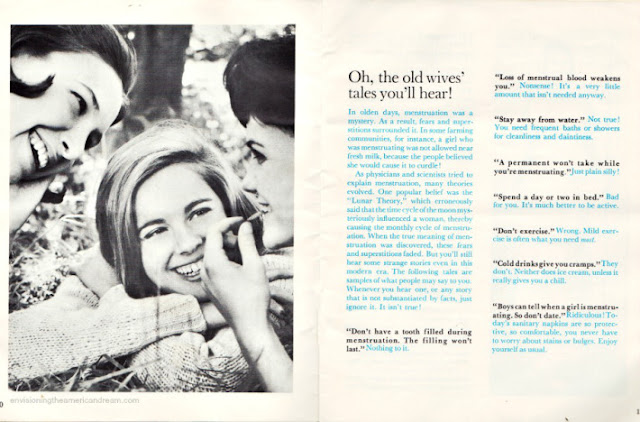 Oh yes, the fun was just beginning.  I was actually 10 years old when I got my menses for the first time. (55 when I finished. That makes 45 whole years of pleasure, and I didn't even get a gold watch.)  I was sure I was dying when it showed up.  Although my mother had all the booklets, etc. ready in preparation for "The Talk," she hadn't actually gotten around to giving me "The Talk", which when I did get it consisted of basically,  you are a young woman now and this will happen every month, this is what you wear, this is how you put it on and here's a book.  With Pictures. 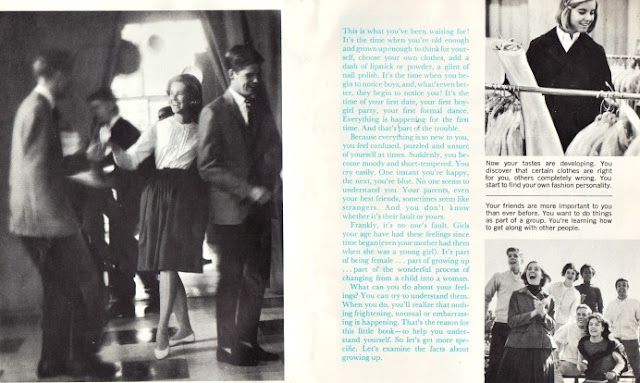 The book made the process kinda look like fun in a way  . . . the pictures in it reminded me of the Saturday dance show I liked to watch on the television called "Bob and the Hits," and then there was "Its Happening" another dance show I liked with Robbie Lane and the Disciples.  (You would have to be a Canadian to know this.)

The girl in the book reminded me of all those young girls I would see getting off the  highschool bus with their twin sets, bouffant hairstyles and swinging style.  The ones getting all the attention from those handsome boys with their slick combed back hair and cool penny loafers.  They all looked so sophisticated to me.


So this was the door to sophistication I assumed. 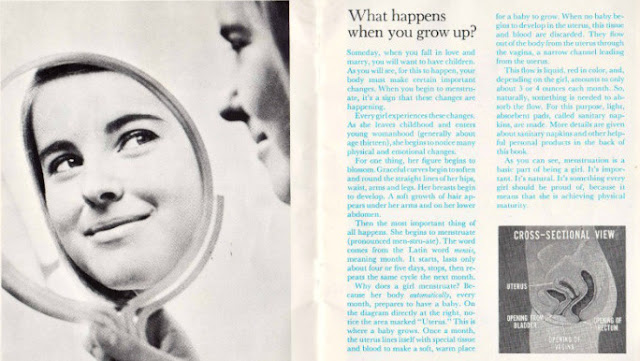 This girl looked so happy about it all, how could I not be a little bit excited!!  In truth the other photo/illustration kind of grossed me out a lot.  And there was no mention of "S-E-X" at all, not from the book and not from my mother.   And to be honest I would have been totally grossed out by that as well . . .  I was 10 and I liked looking at boys and dreamt of maybe one day holding hands with a boy, or even . . . dream of all dreams, shiver up my spine, huge sigh  . . .  being kissed by a boy . . . but I had no idea of what sex was, what kissing could lead to or how babies were made.


I was still playing with my Barbies and would be
for a couple more years.  Tis true, although
I did comandeer my Brother's GI-Joe as
her boyfriend, along with his jeep.
It was time Barbie had a
boy friend and my budget
did not run to a "Ken"
as well as Barbie. 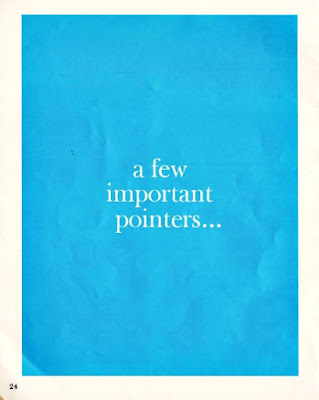 Of course sometimes you might get down in the dumps and the booklet is not lacking when it comes to helpful hints of getting rids of those red-letter day blues.


-Perk yourself up when a period is on its way!
-Dress just a little more prettily than usual.
-Walk as though you loved life.
-Hum a little tune to yourself,
-Smile a little wider than usual.
-Go out of your way to be pleasant to others.

Before you know if you’ll have yourself convinced that you really do feel glad to be alive, and YOU!


How bad could it really be?
After all, menstruation was a gift,
something to cherish,
a miracle to behold. 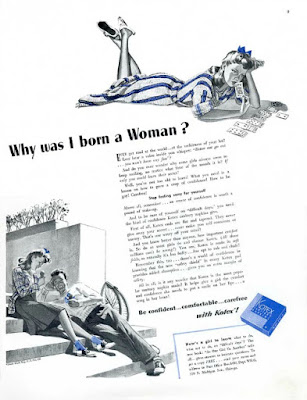 I did have many of those "why me" moments over the coming next few years.  It was sometimes embarassing, very uncomfortable, oftimes painful and agonizing.   The cramps, the pimples, the fear of leakage . . . gym, when you were on your period was NOT fun.  The need to shave under your arms . . . the fear of smelling bad.  None of it was fun when you think about it that way.

Actually though  . . .  becoming a woman was a part of one of the most exciting, demanding and fulfilling roles I have had in my life.  Being a mother and a wife, raising a family.  I have to say in all honesty that having the blessing of being a mom has been one of my greatest joys.  I love all of my children and grandchildren so very much and that just wouldn't have ever been possible without my having become a woman in the first place. 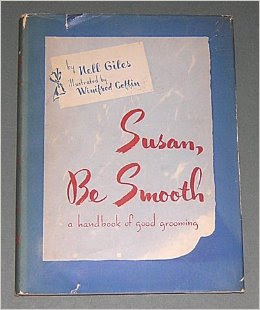 On an interesting side note, there was a book I used to sign out of the school library frequently entitled Susan, Be Smooth.

Susan, Be Smooth by Nell Giles (1940) is a primer on how to be a Smooth Operator and has nothing to do with bathing tips for wome– oh. Correction. It is a “hand-book of Good Grooming for Girls, especially girls under twenty, who want to be seen and heard.” In it, Giles teaches important skills including “the art of pursuit in reverse,” and shares kernels of wisdom like “Girls who aren’t very smart and aren’t very pretty can get anything they want just by being smooth.”

How on earth I thought a book written in 1940 would help a girl in the late 1960's to be a smooth operator I will never understand, but I devoured this book almost with a religious ferocity.  Along with a book I bought entitled "How to Get a Teenage Boy and What to do With Him When You Get Him."  (A book my best friend and I went halves on.)  we were sure that these would be our keys to ultimate success on the boy front.   But my friends  . . .  as they say . . .

that's a whole other story. 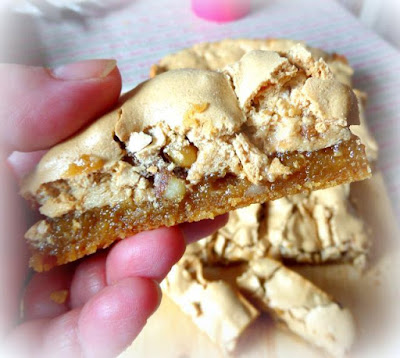 Have a great Sunday.  May it be blessed.  Don't forget!