One of the things I really loved to do as a child in the Winter time was to play out in the snow. We spent 6 years in Manitoba, living in a small town next to Lake Winnipeg, called Gimli, and it was very cold there in the Winter, with lots and lots of snow . . . but I can't remember ever feeling the cold. Perhaps children do not feel the cold like adults do . . . I am sure it was often -27*C or -30*C or even colder . . . with any wind chill added, that would have been very cold indeed. Our breath would puff around in the air about our heads like little chilly frozen winter clouds . . .

I do remember being bundled up within an inch of my life though, so much so that it was a wonder that I could move about with any freedom at all. There would be the ski pants, which were thick and insulated . . . the lining quilted and filled with stuffing of some sorts, probably wool . . . a thick wool coat, also lined with a quilted and stuffed lining. A thick wool cap with ear coverings would be on my head and a wool scarf would be wound about my neck and face . . . on really cold days only my eyes would be exposed, because . . . well, you needed to be able to see where you were going. I would have on my wool stockings (of course) and several pairs of socks and shoes and then my feet would be stuffed into these brown plastic winter boots, which were also lined and had wooley fur cuffs around the top of the insides . . . to keep snow from getting down into there I presume. On really cold days, two pairs of mittens were essentials to keep the hands from freezing. Thus attired, I would be set to go and could spend several hours outside playing with my friends.

And play we did . . . oh what fun we would have, making snowmen and building snow forts, slipping and sliding on the frozen smooth roads which were pounded down to a lovely slippery surface by the many cars that would pass over them during the week . . . just perfect for sliding on. I can remember running as quickly as I could and then sliding . . . seemingly gliding across that smooth surface for miles . . . but it was probably only inches. You know children's imaginations . . . I remember one of the neighbors building his children a real live igloo in the back garden one year. What a magnet that was for the neighborhood kids. I can remember sitting inside it's icy coolness and looking up at the sky through the hole in the centre of it's roof. It seemed just like a magical place . . . all cool . . . and eerily quiet inside . . . the light tinted mysteriously blue . . .

The snow seemed to sparkle back then . . . it's surface glinted like a million diamonds underneath the light of the sun. It would get very hard on the surface and you could walk along it's hard crust without falling down into it. You could punch down into it if you tried really hard . . . which was a game in and of itself . . . I can still remember the sound that my boots would make when they punched down into it. It was a magic world . . .

Often a neighbor would have built a snow slide in the back garden for all the neighborhood kids to use to slide down. This involved shoveling and stacking all the snow up into a huge mound. . .with one side angled at the perfect angle for a sled to slide down with some speed. That side would have been watered . . . along with a good length of snow in front of it, in order to get the most speed and length possible from such an endeavor . . . we lived on the prairies . . . there were no real hills to slide down. Improvisation was the order of the day. Once frozen solid it was like a huge icy slip and slide, that was just wonderful to slide down and across.

I can remember always envying the children who had what we called a flying saucer . . . a big metal disc sort of shaped like a flat bowl, with two leather or fabric handles at the sides to hold on to. Kind of like a big aluminium frisbee. These flew like the clappers and twirled you around at the same time! We had to make do with a flat piece of coloured plastic . . . I forget what they were called now . . . but I know that they were cheap and colourful. The exhilaration of sliding down was fabulous, and I can't remember there ever being any arguments. Everyone seemed to wait their turn and get along with each other.

Other days we would go skating at the outdoor rink. In those days you could have an outdoor rink. There was none of the freezing and thawing that makes it almost impossible nowadays. The ground froze in November and stayed frozen right through to the spring. I lived on an airbase and long about the end of October the base would put up a fenced in area just outside of the school. It seemed huge, but probably wasn't much larger than about 3 back gardens . . . once the snow began to fall and the ground began to freeze, they would flood it with water, which would then freeze and provide the perfect surface for ice skating. They even strung electric lights across so that you could see at night. There were several covered shacks erected nearby, with seats in them so that you could put your skates on right on site . . . nobody ever worried about anyone stealing their boots. It just didn't happen back then. I can remember skating for hours on Saturday afternoons. It was so much fun!! All my friends would be there too.

It is no wonder there were not many overweight kiddies in those days . . . we all spent our days outside, winter or summer . . . playing and running and just moving about. Hot or cold . . . it made no difference. We very seldom were indoors. I can still remember how in the wintertime everyone's cheeks would be so red and cold when we came back in from playing outside . . . how the inside of our scarves would smell like wet wool . . . and the line my mother always kept up which stretched from the furnace in the utility room to the wall . . . which is where all the mittens and scarves, caps and extra socks would be hung to dry until the next time. Our heads would be all sweaty from all the exertion of play and extra layers of wool. It always felt extra warm and cosy indoors after having been outside . . . looking back with my rose coloured glasses . . . it felt like family should feel . . . warm and safe and right. I have no other explanation for it . . .

Oh, I have enjoyed going back in my mind and thinking back on those days this morning . . . thanks so much for humouring me. I would love to hear about your childhood winter memories. Please do share!

We were not in town for very long yesterday. All of a sudden my knees which have been doing so very well for these past 6 months gave out and I was in agony. It was all I could do to hobble back to the bus. I will be calling the Doctor tomorrow to get an appointment for more shots. I was in serious pain and still am today. I'm ok sitting, but it's when I get up to move that it starts . . . it's quite difficult going up and down the stairs . . . I kept the wheat bag on it all evening and in bed, and am going to go and heat it up again so that I can apply it once more. I have had a good run of relatively painless movement these last few months so I mustn't complain . . . hopefully a couple more shots will knock it back for a few more months. I do so want to go to my daughter's wedding in July, but cannot imagine being able to manipulate the airports and sitting on an airplane for the 6 hours it requires with knees like they are right now. I will be going on my own so Todd will not be with me. I will be staying off my feet as much as possible today!

Here is a delicious and easy supper that even my pasta hating husband enjoys, from time to time that is . . . he grumbles a little bit . . . but he tucks in anyways, and often has seconds. It's very simple to make and very tasty! From the Big Blue Binder, of course! (Only the best recipes are in there!) 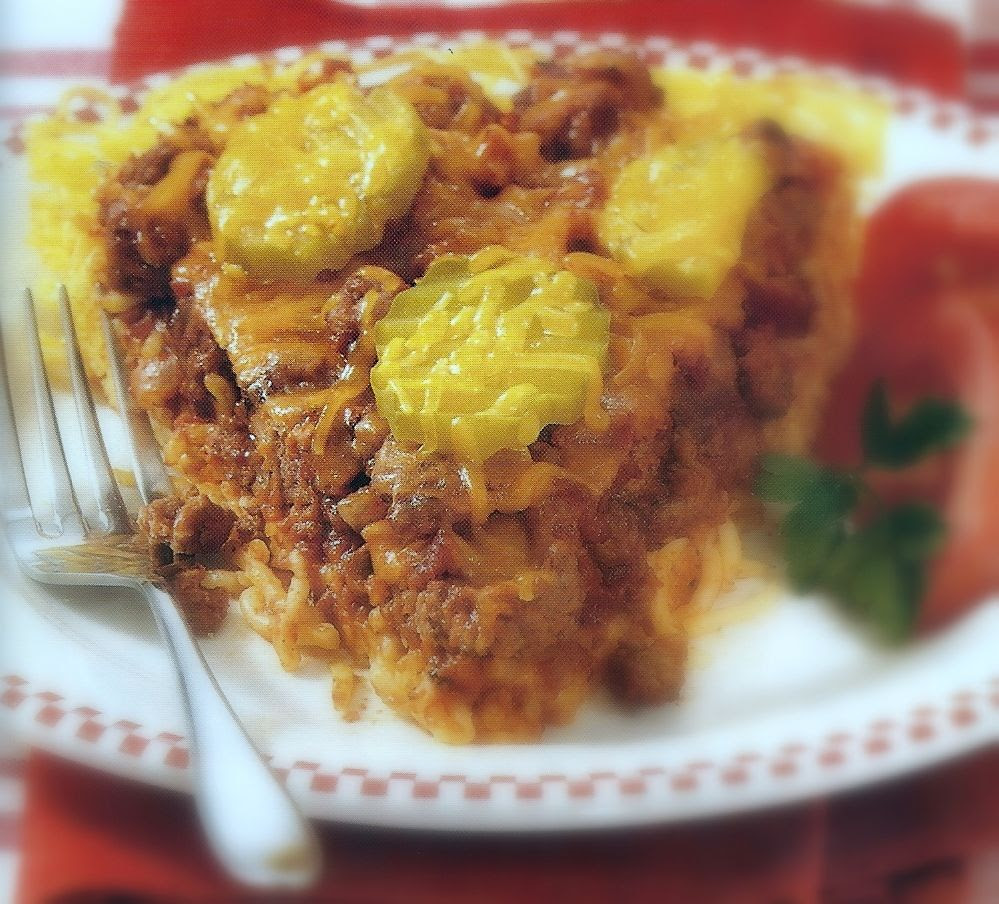 All the flavours of your favourite cheeseburger baked in a spaghetti crust.

Cook the spaghetti according to the package directions. Drain well. Beat the egg and mustard together in a large bowl. Toss in the cooked pasta. Toss together to coat evenly, then press the spaghetti mixture into the prepared pie dish, pushing the mixture up the sides to form a crust.

Crumble the meat into a large nonstick skillet. Add the onion and sprinkle with the seasoned salt. Cook over medium high heat, stirring frequently, until the meat is no longer pink. Drain well. Stir in the bacon and tomato sauce. Spoon this mixture evenly into the spaghetti lined pie dish. Sprinkle with half of the cheese.

Bake for half an hour. Top with the pickle slices and sprinkle with the remaining cheese. Bake for an additonal 10 to 15 minutes, or until thoroughly heated and the cheese is melted. Let stand for 5 minutes before cutting into wedges to serve.

I like to serve this with a nice tossed salad on the side and some crusty french bread. 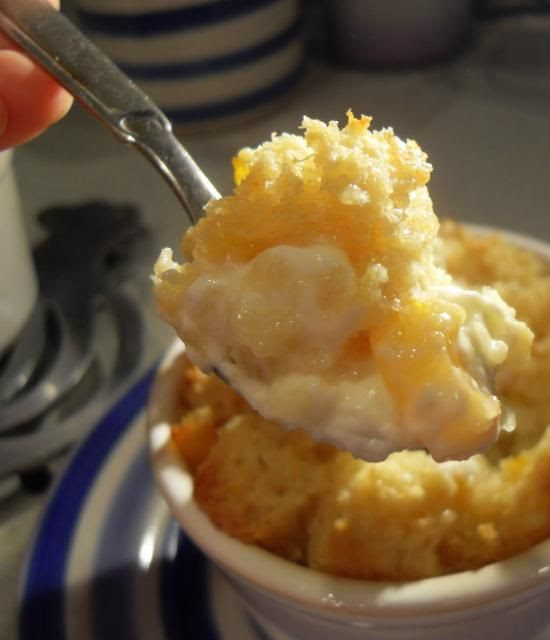 Over in The English Kitchen today, a delicious Apricot Bread Pudding.