Good morning everyone and a very Happy New Year to you all. Old fuddie duddie’s that we are, we were in bed by 10 o’clock last night (and that is late for us!) and we missed the new year coming in, but I can see that it came along without us, so that’s that, not to worry!

I thought it would be fun this morning to go over a few superstitions and old wives tales about New Years. I grew up with a very superstitious mother and so experienced a lot of this stuff as a child, although now as an adult I don’t put much credence in them for the most part. You will still find me knocking on wood and stuff like that, but then as they say, it is hard to teach an old dog new tricks!

Traditions are things we do because we do them. Consistently. Always, forever and ever. They're often easier than thinking up new ways to celebrate or commemorate, and they're comforting in their predictability, though it's not always easy to figure out why we cling to certain traditions with such tenacity.

Superstitions, too, have a way of hanging on for no good reason, and New Year's Eve/Day is a great time to indulge in tradition and superstition — just in case. It never hurts to start the new year with personal traditions covered and superstitions heeded, because it's quite possible that breaking a New Year's tradition will bring bad luck in the coming 12 months, and I believe in hedging your bets whenever and wherever possible!

Here are some New Year's traditions and superstitions culled from Internet sources that come with varying degrees of solid research, truthfulness and believability. Pick one and make it your own — or don't: The thing about New Year's is that it's new. Start fresh. Start over. Start again. And if it doesn't work out, start thinking about next year.

Kissing at midnight: Make it count — these midnight New Year's kisses serve to seal the affection of your nearest and dearest through the coming year. Failing to smooch sets the stage for a year of — well, a year without kisses. (Oh shoot . . . I was asleep! Dangit, now I have a year without kisses to look forward to!)

Pay it off: Mail the bills out before Jan. 1, because the New Year should not be started in debt. (Thankfully we don’t have a lot of bills anyways!)

First footing: This is an old tradition — the first person to enter your home on Jan. 1 will determine the fate of the household for the year. What you're looking for is a dark-haired, tall, handsome man bearing coal, a coin, some bread or salt. Blonde and red-haired first footers are bad luck, and female first footers are not to be encouraged for a second. Don't let a woman in the door before a man steps over the threshold, or you'll be very sorry.

First footers (sometimes known as Lucky Birds) should knock and be let in, even if they live there. They should say hello, pass out the gifts, walk through the house and leave by a door other than the one they entered. No one should leave before the first footer arrives.

(I doubt very much if anyone other than Todd or myself will be coming in or out of our house today. I better make it Todd and I’ll get him to carry in a loaf of bread just in case! Hmmm… I wonder what it means if a bald man wearing glasses and lugging a loaf of bread walks through your door on January 1. Perhaps I better give him a few coins to jingle as well, just to make sure it‘s a good thing!)

Not to worry. It's perfectly acceptable to stage your own first footer arrival, by asking a party guest to step outside at 11:59 p.m., only to knock and be allowed in just after midnight. In fact, if you plan your first footing, you can relax a lot quicker. (Once again too late for us!)

Nothing leaves: Don't let anything leave the house on New Year's Day. If you're going to a potluck, put the food in the car the night before. Seriously. Don't take out the garbage, collect the recyclables or shake out a rug. (sounds like the perfect excuse to me for getting out of a lot of work!)

Eat your peas: Eating black-eyed peas on New Year's Day brings good luck and money. It's worth a try. (I don’t have any black eyed peas, but I do have lots of tins of beans. I wonder if they’ll do?)

Work: Do something work-like on Jan. 1, and do it well, even if you're not at work. Don't do a lot, just a little, because hard work on Jan. 1 is unlucky. (I wish they’d make up their minds! Actually I was planning on going up to the big house later on and clearing out the fridge in time for the garbage men tomorrow. I know, disgusting that I have left it this long, but I was on my Christmas holiday and they have been away!)

No laundry, no dishes: Some believe that washing clothes and dishes will open the gates to allow a family member to be washed away in the coming year. Why take chances? (It’s a good thing I did my laundry yesterday then isn’t it!)

Cut the tags: Wear something new on New Year's Day, and it's likely you'll get a lot more new clothes. (Oh shoot! Guess I am doomed to have no new clothes this year!)

You break it? You bought bad luck: If you break things on Jan. 1, you'll be breaking things all year; and if you cry on Jan. 1, that sets a sad tone. ( that tears it, I’m not picking up anything breakable today and no sad movies for me, only comedies. Hmm….I wonder what happens if you laugh so hard that you cry?)

Open the doors: At midnight, open the doors to let the old year escape. (0nce again too late!)

Make some noise: It's more than a celebration; banging pots and pans or yelling or whatever is a way to scare the evil spirits away (evil spirits hate loud noise — that's why church bells are so loud when something nice happens). (Does snoring count?)

Hmm….if you happen to look out your doorway today and you see a rather odd lady walking down the road, with a few pots and pans rattling and dangling around her waist, in dirty clothes eating black eyed peas out of an unwashed tin, that might be me . . . But then again, on the other hand it might not, because as I have already said, I am not a superstitious person! Now where did I put my new socks???

This is a lovely side dish to have today with your Roast Ham or whatever it is you will be munching on to celebrate the arrival of the new year! I think Green Beans are one of my favourite vegetables. Mind you . . . I have never met a vegetable that I didn't like! (Psst! by the way, it hasn't snowed here. I just fancied using these lovely wintery pictures here this morning! That's the best way to enjoy snow . . . in pictures! When you get it for real, it just complicates things!) 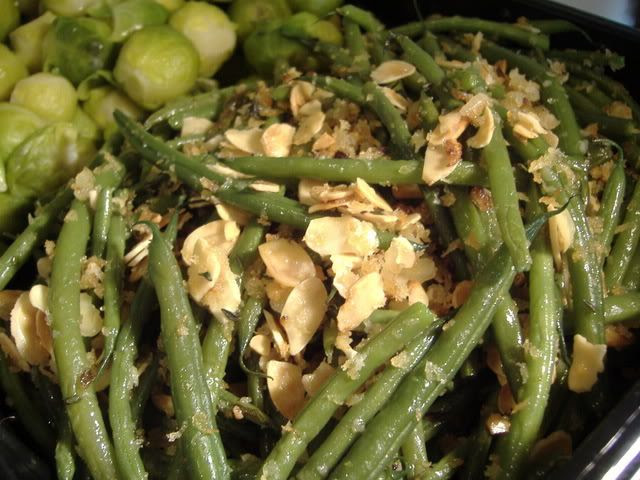 This probably isn't an authentic way of making Green Beans Almondine, but it is my way of making them! It's quick, easy and quite, quite delicious!

Bring a pot of lightly salted water to the boil. Drop in the green beans and bring the water back to the boil, then reduce the heat and allow to simmer for 4 minutes. Drain well, then refresh with cold water to stop them from cooking any further. Drain again. Set aside.

Melt the butter in a large skillet, over medium heat, until it begins to foam. Add the shallot and cook, stirring, until it is softened. Do not brown. Toss in the bread crumbs and thyme. Cook and stir until the bread crumbs are golden brown and crisp. Toss in the almonds and green beans. Heat through and stir until the beans are quite hot. Season to taste with some salt and pepper and serve immediately. 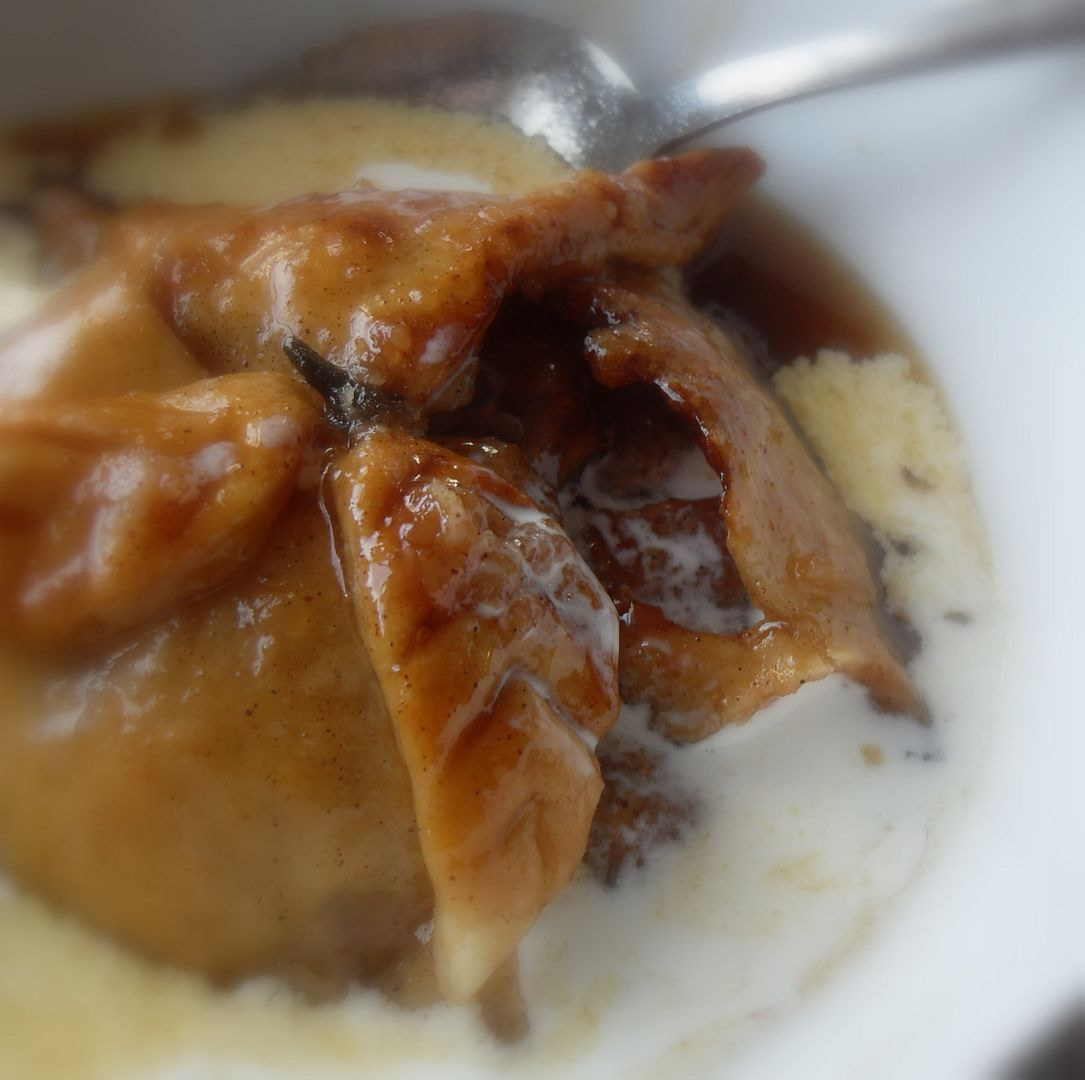 “We have a choice. We can seek for the bad in others. Or we can make peace and work to extend to others the understanding, fairness, and forgiveness we so desperately desire for ourselves. It is our choice; for whatever we seek, that we will certainly find.”
― Dieter F. Uchtdorf

Email ThisBlogThis!Share to TwitterShare to FacebookShare to Pinterest
Labels: nuts, Side Dishes, Vegetables