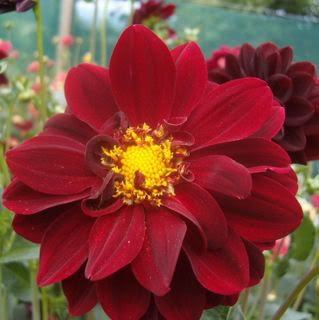 “It’s never to late to be what you might have been.” ~George Eliot

When I was a child I had many hopes and dreams . . . golden dreams, and aspirations of who I would someday be . . . dreams and hopes of one day being a great artist, or a much sought after writer . . . dreams of having a lovely home, with a loving husband and well behaved children . . . many hopes, some realistic . . . other’s not so realistic. What little girl does not dream of one day becoming a ballerina at some point, or a teacher, nurse, movie star, pop star . . . you name it . . . there is no end to childish hopes and expectations.

Life quite often gets in the way of dreams though, and at some point reality overtakes the fantasy. You find yourselves caught up in the mire of the here and the now . . . the struggle to raise a family perhaps, taking care of a home, meeting the needs and demands of those around you. Sometimes, along the way of life’s journey we lose sight of those childish hopes and aspirations, and they get put on the back burner. That is okay. There is a time for dreams and there is a time for reality. Sometimes the dream is the reality. That’s the way it was for me for many years. As a child I did have the same fantasies of success and stardom that other children had, but I also wanted nothing more than to be a mom and a wife and to have a home. When I was bringing up my children I was very content to be exactly what I was at the time and found great joy there. 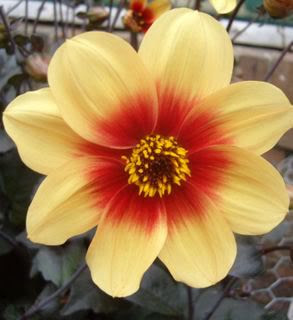 I never dreamed, throughout those busy years, that I would one day find myself, at the age of forty-three, separated and living on my own for the very first time in my life. I was facing divorce, with no apparent skills to offer the world or to support myself with. Little did I know. The next few years were to bring about a metamorphosis no less dramatic than a caterpillar building a cocoon and emerging as a beautiful butterfly. What, at the beginning of that time, was a middle aged woman, who thought she had nothing to offer the world, has emerged some, almost ten years later, as a woman who now knows who she really is and has caught sight of her dreams, and is not afraid to pursue them or take hold of them, and, who in fact, believes she can be whomever, or whatever she hopes to be. I have found my identity as ME . . . I am no longer just someone’s daughter, or someone’s wife, or someone’s mother . . . but I am ME, the ME who can be anything, do anything, and go anywhere my heart deigns to take me. I have a confidence now that I didn’t have when I was younger. I am finally coming in to my own. 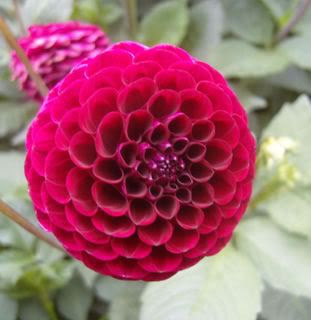 It wasn’t a realization that suddenly came overnight, but a process that began with taking stock of my life and realizing who I really was. I would have to say that my church and my faith had a really big role to play in that realization. Discovering and embracing that I was, indeed, the child of a Heavenly Father opened up a whole new world to me, a world where I saw myself as having unimaginable worth and presence, and unlimited potential . . . the potential to be, whatever my thoughts and dreams could make me, and to go, wherever my aspirations could take me.

Ten years ago I could never have imagined myself speaking in front of one or two people with confidence and assertiveness . . . but now I regularly write and give talks in my church, in front of rooms full of people and I actually enjoy doing it when I do it. I was recently asked if I would give a talk in front of a much, much larger group of people and I was well pleased to be asked and looking very much forward to doing it, when I realized the date for doing so was impossible and clashed with a work commitment so it would have to be put off for another time. I was well disappointed in not being able to do it, and I actually shed tears. I could never have imagined ever feeling that way ten years before. I would have dreaded even the thought of doing such a thing. Knowing who I am has given me the confidence to soar through my life instead of merely crawling through it. 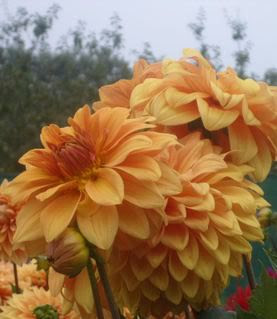 Little did I know in those past years, as I was raising my family and cooking up big meals for all of them and their friends . . . not to mention, for the many guests that entered the open doors of my home, that I would be honing skills that would come in very handy in these latter years of my life. That I was helping to build my confidence and ability as a good cook, a skilled cook. Going to catering college after my divorce and subsequent remarriage was like a dream come true, and I was able to refine those skills and develop them even further. The little girl who had dreamt of cooking for kings and queens with her Robin Hood bake set had finally come into her own, and I am now doing what I love to do most, and being paid for it as well!! I never get into a flap up at the big house when I have a large party to cook for. I look at it as a challenge and a pleasure, the perfect time to stretch myself and to move forward and develop myself even more.

The other week when I hosted my cooking club here I really enjoyed it. I have always dreamt of having a cookery school or being able to share and teach my skills to others, and those cookery nights I host for the women from my church, while not as grand as having my own cookery school, are yet another realization of the dream, albeit on a smaller scale. I have this other dream as well, of producing and posting small cooking instructional clips here on the web to share with others, to share with you. I have a video camera now, but am sad to say we haven't actually used it yet. We are still figuring out the bugs, but stay tuned, you never know what you might see here one morning! 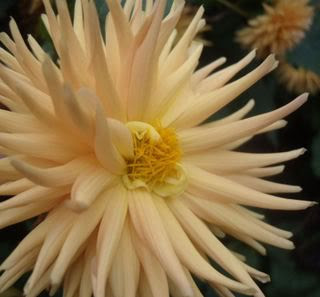 I have been working on writing my cookbook and am happy to say it's almost done. I am going to self publish, which will be another adventure, so once again, look for that real soon too.

I love to paint and am proud to say that several of my paintings now reside in various corners of the world. I recently had the occasion to do a cover for a wedding souvenir booklet that was seen by several hundred people and I have a whole stack of sketches just waiting for my ink and brush to make them real. All I am lacking in is the time to get them done . . .

To be successful you have to have a dream, and then, you have to believe in the veracity of that dream . . . to believe that it can and will come true. You’re never too old to be what you might have been and you’re never to old to live the dream . . . the world is your oyster, and all the good things in it are yours for the asking . . . all you have to do is believe in yourself . . . once you can do that . . . the rest will fall into place. After all, if you don't believe in yourself . . . who else will???

We are getting to the end of strawberry season here now. They are being eclipsed in the shops by blueberries and raspberries . . . I did take advantage of some late ones though to make this delicious strawberry tart. I believe in eating things in season if I can, for that's truly when they taste their very best. 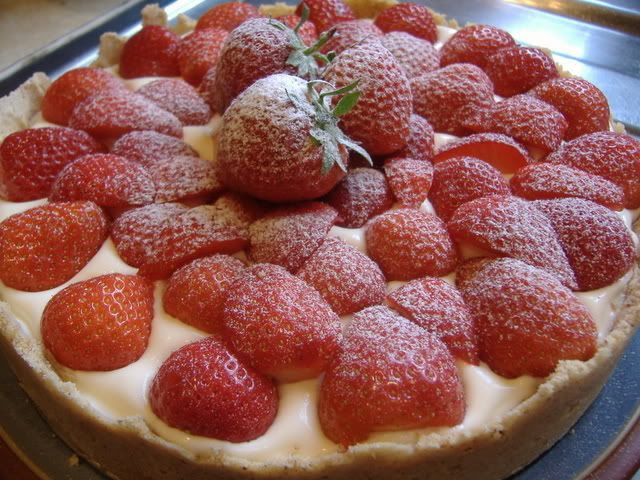 Easy to make and a beauty to behold. This lovely tortecombines a wonderfully crisp and buttery shortbread crust with all the decadence of a luscious cream filling, topped with gorgeously sweet strawberries. A final dusting of powdered sugar is it’s crowning glory. It’s hard to believe that something so easy can be so impressive, but it’s true!

Pre-heat the oven to 165*C/325*F. Place the nuts in a food processor and pulse them until they are finely chopped, taking care not to turn them into a paste. It should only take 4 or 5 pulses. Add the sugar and the flour and pulse to mix. When well blended, add the butter, 2 TBS at a time through the hopper, pulsing until the mixture forms a crumbly consistency, and the butter is worked well throughout.

Remove the crumbs from the processor and spread into a 10 inch spring form pan. Press evenly on the bottom and pushing one inch up the sides of the pan to form a shallow crust with one inch sides. Bake in the pre-heated oven for 30 to 40 minutes or until golden brown. Remove from the oven, place on a wire rack and let cool completely in the pan.

Once the crust is cooled, place the cream cheese and sugar in a small bowl and beat together until fluffy and well blended. Place the whipping cream in another bowl and whip until soft peaks form, taking care not to over beat it. You don’t want it to be granular. Slowly fold the cream cheese mixture into the whipped cream, until well blended. Spread evenly in the cooled crust and then refrigerate for an hour or so to firm up.

When ready to serve, arrange the sliced berries on the top of the chilled cream mixture in a decorative manner, placing a few berries in the centre to garnish. Remove the sides of the spring form pan and place on a serving plate. Dust lightly with icing sugar.

*Note - Don’t ever wash strawberries. They become soggy and waterlogged. Just lightly wipe them with some damp paper towelling if they are dusty and dirty. Also, don’t refrigerate them. The flavour is so much better at room temperature, and if you can leave them out in the sun for a bit until they are lovely and warm and juicy, so much the better! 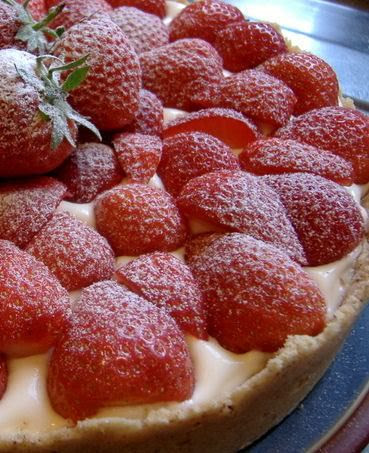