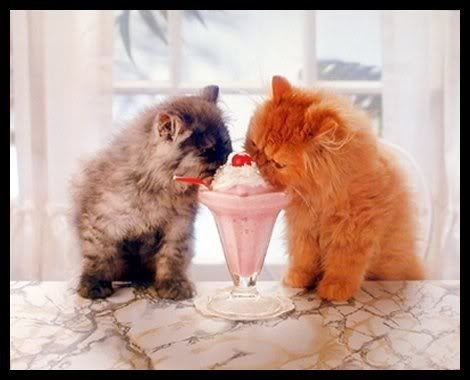 WE all scream for ice cream!

I am Marie Rayner
I run Rayner‘s ICE CREAM STORE,
there are flavors in my freezer
you have never seen before,
five divine creations
too delicious to resist,
why not do yourself a favor,
try the flavors on my list:
Beezleberry jam crunch
scrumptious noodle soup
black bananas in a bunch
strawberry goop
dingleberry loop de loop
I am Marie Rayner,
I run Rayner's ICE CREAM STORE,
taste a flavor from my freezer,
you will surely ask for more.
~by Me

I know, it's a silly poem. I found this page where you could make up your own ice cream poem. , and I thought why not! After all this is my Tuesday's With Dorie post and it's my blog and if I want to start it off with a silly poem, then what the hey! What's a little silliness amongst friends!

Yes, it's Tuesday's with Dorie Day and as you might have guessed by that bit of silliness at the front . . . this week we are doing ice cream, and more specifically Blueberry Sour Cream Ice Cream as chosen by Dolores of Chronicles in Culinary Curiosity. You can find the recipe on page 434 of Dori Greenspan's lovely book, Baking From My Home To Yours. If you don't have a copy of it already, you really should get one. It's well worth the money spent! I have loved just about every recipe I have baked from it! You can pick it up here, for as little as $7.43, a real bargain, if I don't say so myself!!! 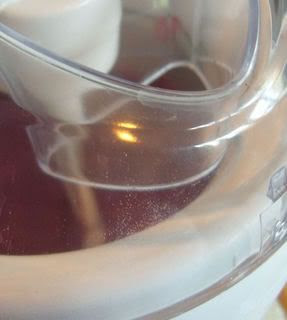 I was thrilled when I saw what the recipe was going to be this week. I love ice cream and I love blueberries! I bought myself an ice cream maker about 3 years ago now, and I am ashamed to say that I have only used it once. Well twice actually . . . but we won't count the first time when I ended up with vanilla soup because I didn't realize that you had to put the insert in the freezer overnight to freeze before you tried to make ice cream with it. I plugged it in and had it going for hours before I gave up on it and thought I had bought a dud. I forget now who it was who told me that you had to freeze the container first. DOH! 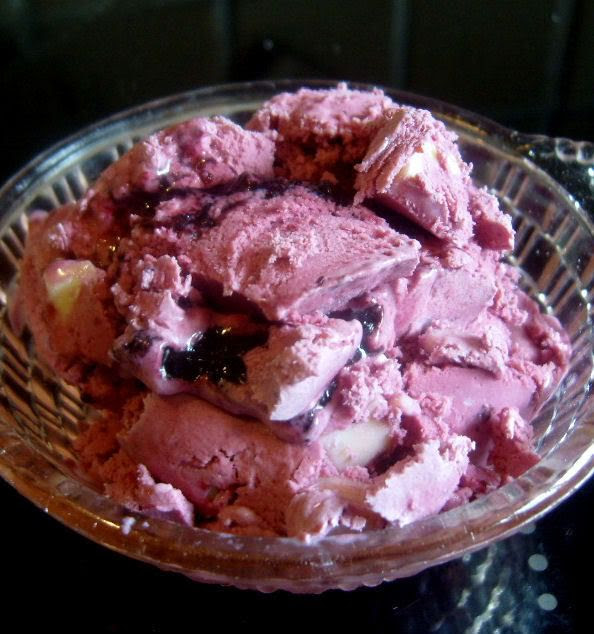 Anyways, I did try using it again and had great success with it. My only problem is that I rarely have enough room in my freezer to put it and so . . . it sits on the shelf gathering dust. Never mind . . . I made special room in my freezer this past week for it and am I glad I did!!!

I loved this recipe! (I know!! I say that every week!) Seriously though . . . I DO LOVE IT! It was so easy! There was no real cooking involved, except for the initial cooking of the blueberries. The blender did the rest, oh . . . and the ice cream maker of course! I tried to take a film of the ice cream maker in action, but it was largely boring . . . so you won't get to see anything but a still shot of that . . . but you will get to see the finished product. 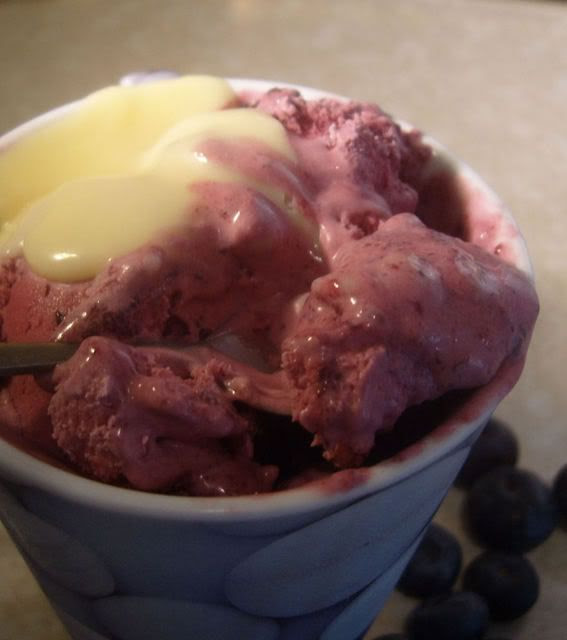 I decided that I wanted something a little bit more exciting than just a plain ice cream and so I added white chocolate chunks and a ripple of blueberry preserves running through the middle and then, just to make it really decadent, I did a White Truffle Chocolate Sauce to spoon over the top of the finished product. 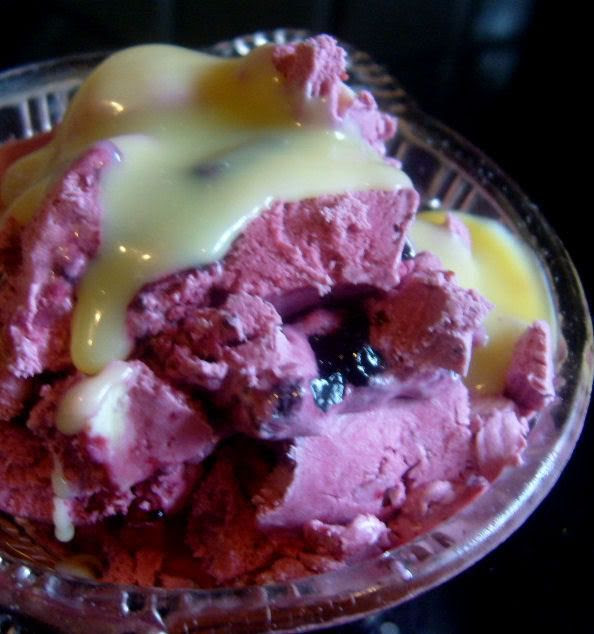 THIS ICE CREAM IS TO DIE FOR! Even without the chocolate chunks, jam ripple and sauce. I could have eaten the custard right out of the blender, without even freezing it. RUN to the store RIGHT NOW and buy yourself some blueberries and MAKE THIS!! NOW! You won't regret it . . . although . . . your hips might . . . just a tad . . . 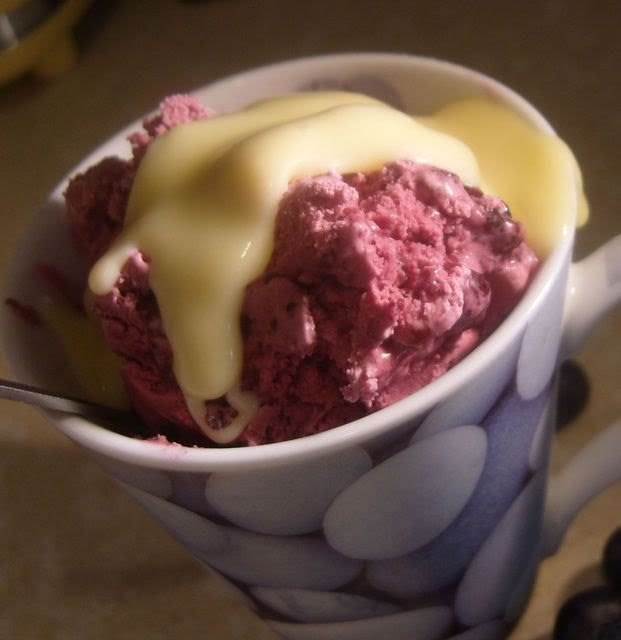 If you would like the recipe, hop on over to Dolores' page. It should be posted there at some point today, and in the meantime be sure to check out the blog roll and see all the other delicious versions of this same recipe!! Looking doesn't make you gain weight, or at least I don't think it does! Ohh, I have me a little bit left in the freezer and I am thinking that fruit and dairy are really a good breakfast choice. After all . . . it is two of the four food groups all in one go isn't it, that is if you don't count the chocolate and make it three. Chocolate is one of the four groups too . . . yes it is! Because I said so! 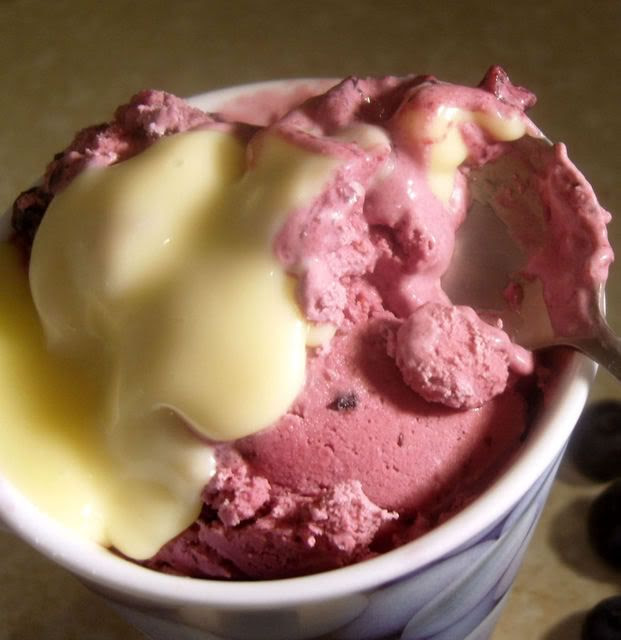 Heat the white chocolate and butter together in a small saucepan over low heat. Stir constantly until melted. It may look thick and grainy at this point, but don't worry.

Remove the pan from the heat and whisk in the heavy cream until smooth. Cool to room temperature before using.

You can keep this stored in the refrigerator for several days. Just warm it in the microwave for about 20 seconds before using.
Posted by Marie Rayner at 05:13