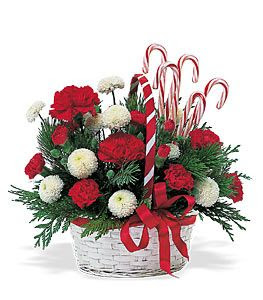 As a child growing up in the late fifties and early sixties, candy was not something I got to eat very often. There were only a few times of the year that it was generally on offer, and in abundance, and one of those was Christmas.

A few days before Christmas, my mother's special candy dishes would appear on the living room coffee table. The one I remember the most was like two shallow bowls attached in the centre with a small handle in the middle that you could lift it with. One side was a pale blue ceramic and the other side a yellow. 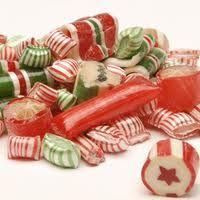 Into that would go small coloured pillows of hard Christmas Candy. There were flat waffles types of red and green and yellow, their dimpled surface calling to my sweet tooth and making my mouth water. Puffy little squares of every colour under the sun . . . some filled with the spicy flavour of cinnamon. Round ones, coloured on the outside surface, but with a picture in the centre . . . looking like little jewels. I could never quite make out what the picture was, but I tried . . . 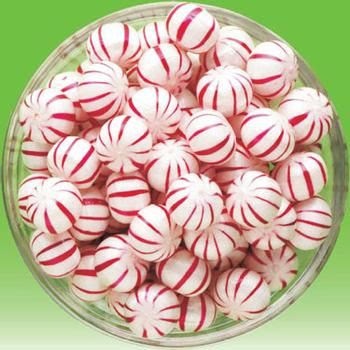 Red and White striped peppermint balls. I remember choking on one of those once during one Christmas season. My mom and dad were out, so we had been left with a babysitter. No doubt we were taking full advantage of her kindness and begging her to let us eat some of the Christmas candy. I remember the pure panic of not being able to breath and the babysitter hanging me upside down and knocking it out of me. 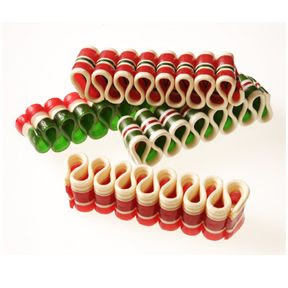 The candy I loved most of all was the ribbon candy. It's flat sweet surface curled up like ribbons, gaily striped in various shades of primary colours. Red, green, yellow, white . . . some was vaguely peppermint flavoured, some spicy cinnamon, but mostly just generically sugary sweet. 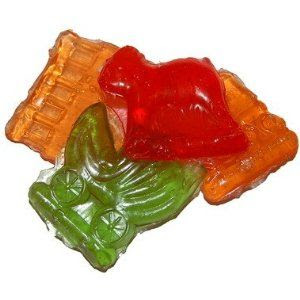 We didn't have stockings as children, but every Christmas Eve we would put a bowl in our place at the table before we went to bed, and just like magic, when we awoke in the morning it would be filled. There would be a tangerine, a few nuts, a candy cane, and an assortment of other Christmas Candies . . . the favorite one being a barley candy toy. Clear like glass, and shaped like choochoo trains, Santa Claus or different animals these were the piece de resistance of Christmas Candies . . . Oh, how I delighted in their different shapes and colours!! They only came in red, green and if you were lucky a pale yellow. These little babies lasted all day. It was impossible to bite them, and so you had to content yourself with sucking them . . . and sucking them . . . and sucking them . . . 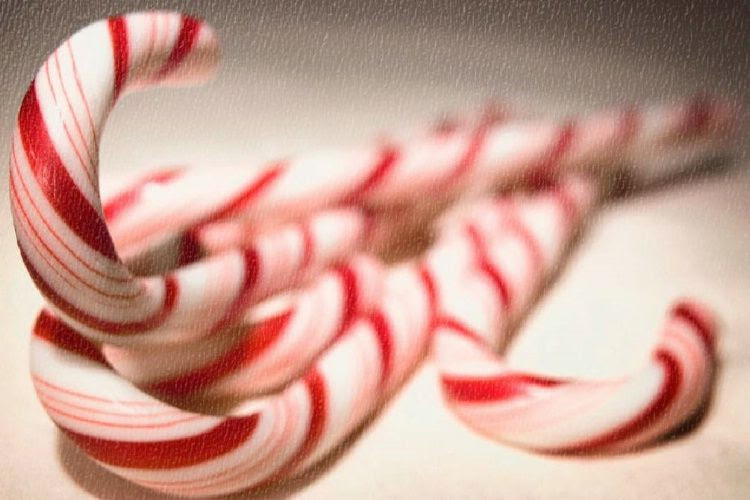 Mom always made her special fudge at Christmas. It was always the same flavour every year, with no variation, with perhaps the exception of a few walnut meats being stirred in . . . if there were any leftover from the Christmas baking. Peanutbutter Fudge . . . and we loved it.

She had a special pot that she used only for making fudge. She didn't actually measure the ingredients, so there is no specific recipe for it. She just knew by looking at the pot exactly how much of everything she needed to put into it. Into the pot would go brown sugar up to a certain level in the pot and then she would add milk. She knew just how much to add by the way it would look with the sugar. Then there'd be a big lump of butter. 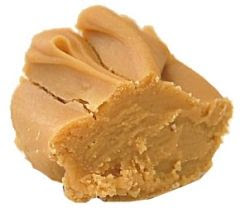 Onto the stove it would go and she would stand there stirring while it melted and bubbled away . . . a tumbler of water sitting close by. After it had been boiling for what seemed like forever to me, she would drop a bit of the mixture into the water and if it formed a soft lump she knew it was ready. That's when the fun would start. Into the hot mass a lump of peanut butter would go, along with the nuts if she was using them. 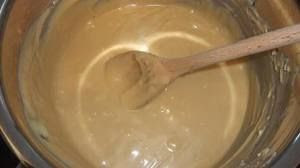 She would then beat it . . . the wooden spoon hitting the sides of the pot, making a hollow metalic thumping noise. It was magic to me, how those few simple ingredients could turn into such a lucious treat. When I got a bit older, she would let me beat it for her, always watching me carefully so that I didn't burn myself or so that the whole mass didn't suddenly turn into fudge in the pot. You had to beat it only to a certain point at which you quickly had to turn it into a buttered pan. Her's was a shallow tin square pan with these pretty swirls on the bottom. To this day, fudge just doesn't taste the same for me unless it has those pretty swirled patterns on the bottom . . . anything else is but a pale imitation of what fudge should be, or at least to me anyways.

I made fudge with my kids as well when they were growing up. It was never quite the same as my mom's, and sometimes we ended up having to eat it with a spoon . . . but I know my kids must have fond memories of our fudge making days. I wonder if many mom's make fudge with their kids today? There is a special magic in looking around a table at sticky sweet little faces and knowing that you played a part in putting the smiles of satisfaction and contentment there. I think this year that I will make some fudge for Todd . . . I'm sure he'd love it. Probably not quite in the same way . . . and I won't have that swirly bottomed pan to set it in either . . . but one must do what one must do . . .

Here's a delicious Christmas Candy Treat that will amaze your family and friends! Just perfect for dunking into hot chocolate! Fabulous laid out in a pretty box, and given as Christmas Gifts! Easy and quick to make! 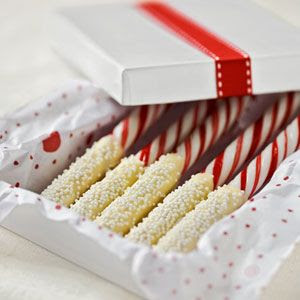 Pretty and perfect to use as stir sticks for that yummy hot chocolate you are going to be sipping on Christmas Eve. They also make a fabulous gift!

Line a baking pan with some parchment or wax paper. Set aside.

Melt the white chocolate in a bowl set over a pot of simmering water. Be careful not to allow the bottom of the bowl to touch the water and do be careful not to let any water get into the bowl of chocolate, or it will seize.

Dip the peppermint sticks, about a third of the way up, into the melted chocolate, one at a time. Transfer to the baking pan. Allow to set for 5 minutes. Roll the chocolate coated ends into the non-pariels and then return to the lined baking pan to set completely at room temperature. Store in a tightly covered container. 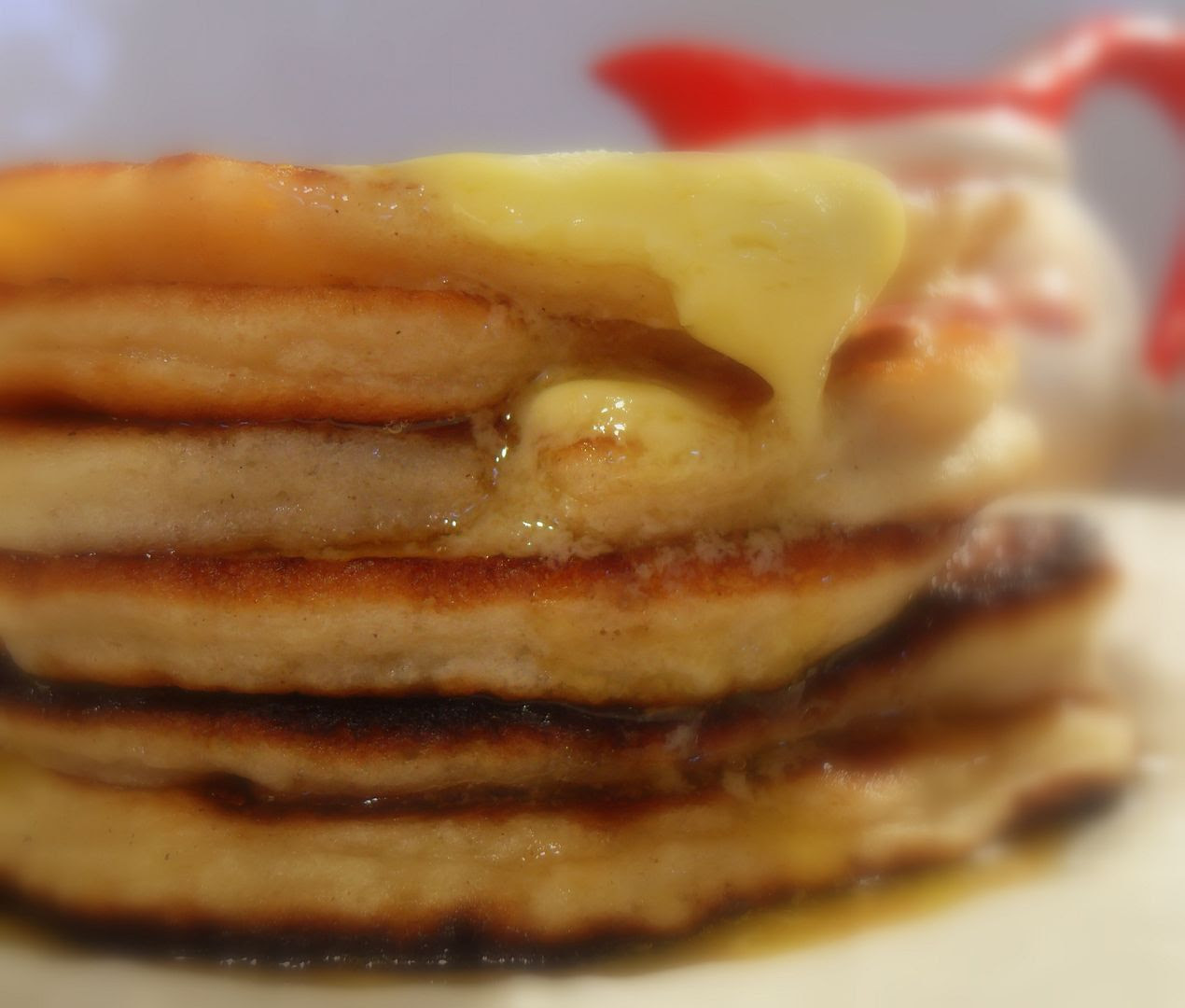 In The English Kitchen today, delicious Applesauce Pancakes with a Spicy Apple Syrup.

PS - Yesterday was the first time I saw a Doctor for my knee pain, the other times it had just been the Nurse Practioner. The Doctor gave me two prescriptions, one for co-codemol (for pain) and one for an anti-inflamatory (ibuprophen). I also now have an appointment for an x-ray on Friday and then if it warrants it, a knee replacement. They are keen to get on with it as the new changes in the NHS that the government wants to push through will see a drastic reduction in the amounts of knee and hip replacements done in the future.