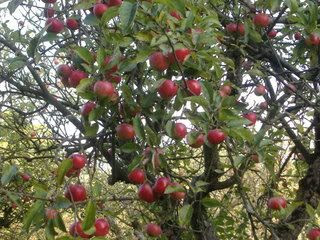 We have a rather rambunctious Border Collie named Jess. Because we can't have any children of our own, we choose to have a dog. She is as spoilt as any child would be if we did have one and gets most, of not all, of our attention. We got her at a dog rescue centre when we were living up in Chester. I wasn't quite sure at the time if I really wanted a dog. I'd always had cats pretty much, but Todd was a real dog person at heart and he was longing to have one, so we went along to have a look. My heart always breaks when we go into those types of places. I always want to bring all of them home with me. We looked at all the dogs, one by one, but our Jess, her face just reached out to us and tugged at our heart strings. She had such a compelling look about her and we fell in love with her at the very first glance. 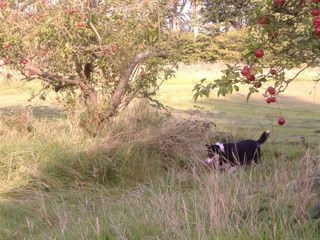 She's a lovely dog. It was quite obvious from the moment we got her home that she had been abused by whomever had owned her before us. She was very timid and frightened and cowered at any sudden movement or noise. I don't know how anyone can be cruel to animals. They had told us at the rescue centre that she was about 2 years old, but she doubled in size after we got her so we don't really think that she had even been a year old. It was several weeks before we even knew she could bark. She made no noise at all. When we would put her food out for her to eat she would cower and it was only after alot of encouragement on our part that she would go over to it and eat, and even then, she appeared to be anxious and had her tail between her legs, looking every bit as if she expected to be smacked or worse the whole time she was eating. The minute there was a loud noise, or anyone came to the door she would wee and then of course she would be terrified that she would be in trouble. We never got cross with her though, it broke our hearts to see how frightened she was and how nervous. After the first few times, we just took up the carpet and got rid of it for a time. It took us about six months of patience and love and finally she stopped doing that, although even to this day she is very leery of men when they come to the house, unless they are well known to her. 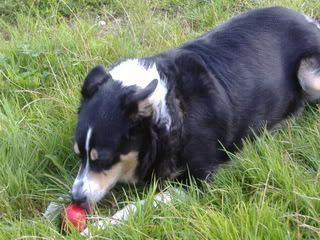 She loves living here where we live. We don't need to tie her up and we often take her on long walks over the orchard. She's very obedient, unless there is a rabbit or a squirrel about. She loves to chase those and we often have to call and call and get a bit cross with her before she will come back. She always has a sheepish look on her face when she does as if she knows she has been a bit naughty. She's a funny dog though, although she could go out in the garden and play for hours at a time and has the freedom to come and go as she pleases she rarely will, if ever, go out there on her own, much preferring for one of us to be with her, or the little lad next door. They are fast friends.

Her favourite game to play is ball and she will play that for hours or as long as you will throw it at any rate and every round object is a ball to her and something for her to play with. When my youngest son was over here she played football with him every day in the back garden. Because it was too large for her to hold the ball in her mouth, she would run her nose under it and throw it up into the air that way. This time of year she really enjoys her orchard walks as there are apples lying everywhere and they are just balls to her, albiet tasty ones and she is constantly bringing us one to throw for her to run after and catch. Sometimes she will just sit and chew them. She loves to chase sticks as well. 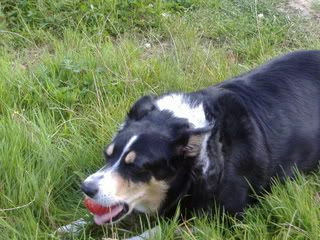 Another of her favourite games is bubbles. We discovered that quite by accident. I had some bubbles that we got from several of my children's weddings. Over in Canada now, instead of confetti people blow bubbles and I had brought them home as souveniers. One day I just happened to blow a few and she went nuts, chasing them around the garden and jumping up in the air to catch them, a very surprised look on her face when they dissappeared. Now we buy bubbles just specifically to play with her and she gets really exited when she seems the container come out. They make her very thirsty though . . . so as much as she loves to play the game I don't do it with her very often.

She's such a happy soul and I know she smiles. Her whole body smiles. I'm so very glad we chose her to join our family and brought her home with us. My heart breaks to think that even for an instant that anyone was ever cruel to her. She has such a gentle, loving and obedient nature, I cannot even imagine anyone ever needing to be really cross with her. 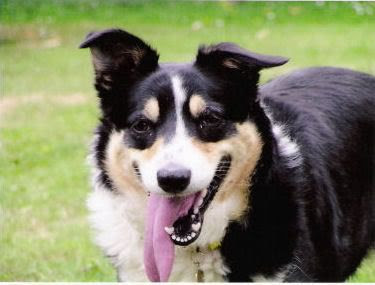 There is something very comforting about having a dog in a home, especially one as loving and affectionate as our Jess. She's always happy to see us no matter how long we've been out and she's great company on a cold and windy day. She doesn't ask for much and only loves in return. She's added a dimension to our lives that we would otherwise never have experienced and I cannot imagine a life without her in it now. Country cottages and dogs . . . they just go together, well . . . like peas and carrots . . . 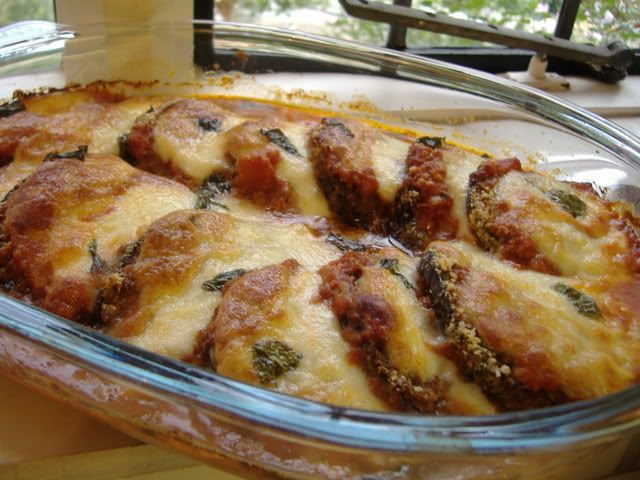 This is a really delicious way to enjoy aubergines. I love the crunchiness of the bread coating over the soft melting tenderness of the aubergine inside. When you combine it all with a delicious tomato sauce and oozing mozzarella cheese you have pure and utter bliss.

Mix together the breadcrumbs, basil, oregano, garlic powder and parmesan cheese in a shallow bowl and set aside. Put the beaten eggs into another shallow bowl.

Sprinkle the aubergine slices with salt and pepper and then dip them into the beaten eggs. Dredge each one in the panko mixture. coating them well. Set aside on a plate until all the slices are coated.

Heat some olive oil in a large nonstick skillet over medium high heat. Add the aubergine slices and fry them until golden brown on both sides. Drain on some paper toweling until finished.

Pre-heat the oven to 180*C/350*F. Place the fried slices into a baking dish. Cover with the marinara sauce and then the sliced mozzarella. I like to overlap the slices of aubergine a little bit and tuck the slices of mozzarella in betweeen. Scatter a healthy dusting of more Parmesan cheese over top and then throw on some torn basil. Bake in the heated oven for about 30 minutes, or until nicely bubbling and golden brown on top. Remove from the oven and let sit for about 10 to 15 minutes before serving. I Like to serve it with some buttered angel hair pasta and a fresh green salad on the side.

A good all purpose tomato sauce that's big on flavour and great to haveon hand in the freezer.

Heat the olive oil in a large heavy bottomed saucepan. Add the onions, garlic and chili flakes and sweat them in the heated oil until soft and translucent. Add the basil, oregano and tomato puree. Cook and stir for a few minutes, before adding the tomatoes along with their juices and the wine. Simmer, uncovered over low heat for 1 to 2 hours, stirring occasionally. Season with salt and pepper to taste and the sugar if desired. If you find it too thick you may thin it with a bit of stock. This freezes very well so I often double the recipe.
Posted by Marie Rayner at 06:09